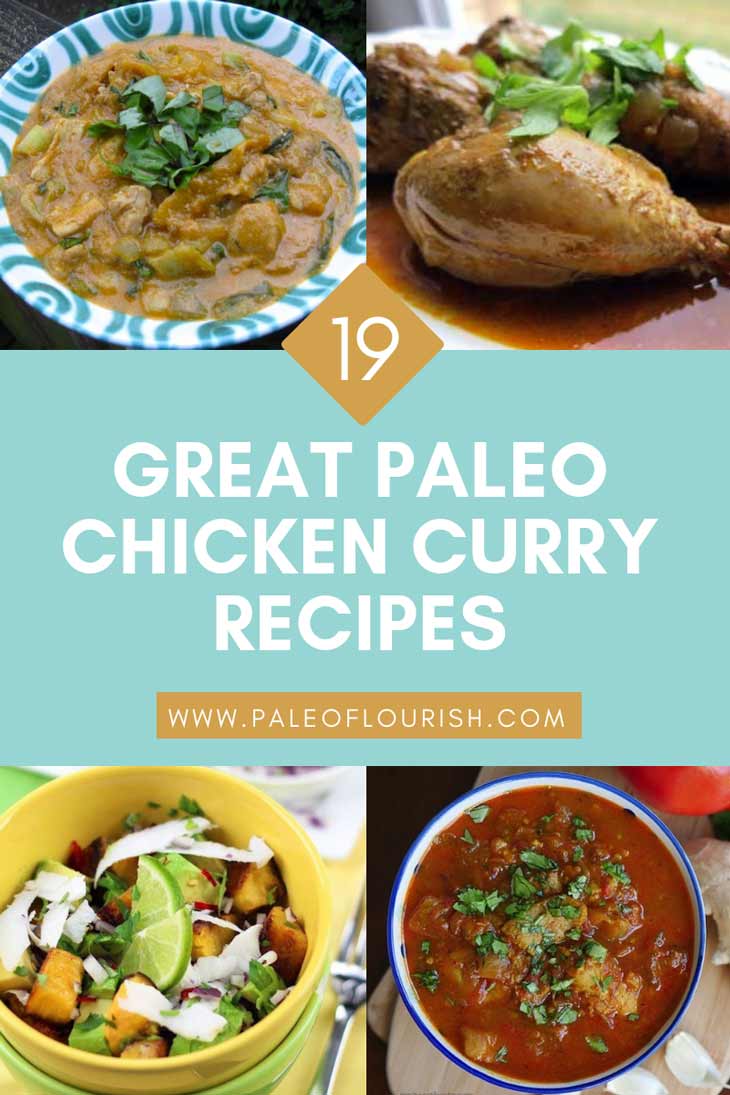 With Thai and Indian food being my two favorite cuisines, I’m a BIG fan of the curry. I tend to make and/or eat curries on a very frequent basis. Curry is a huge part of my life and I’m excited for the chance to share it with you!

I realize that to some, the term ‘curry’ may be a source of confusion. What is curry powder and why are there so many different kinds? What is the difference between the curry powder and curry paste? Curry leaves? Just plain curry? Allow me to break it down for you as I understand it…. “A curry” is the name of the general dish of meat and/or vegetables that is cooked in a gravy-like sauce. You knew that already. Curry powder is a blend of spices (and there are myriad combinations depending on origin and style) that when added to an ingredient like chicken, make that item “curried”. Curry paste is a concoction more common to Thai preparations and it is usually made by grinding up whole spices with bigger things like peppers, shallots, garlic and more. Curry leaf (aka neem) – which you may not have heard of but it’s good to know anyway – comes from a plant that is native to India. The dried leaves are used in many Indian preparations much like bay leaves are used and then discarded before serving. You won’t see any curry leaves on this list but I thought I should mention it just to be thorough. But enough with semantics and terminology! I know that what you really are after is a tasty meal. So without further ado, here is our list of 28 Great Paleo Chicken Curry recipes! 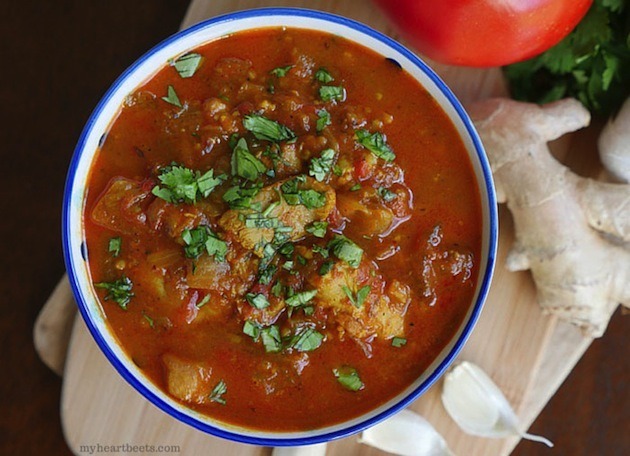 Ashley really goes all out with the spices in this amazing chicken curry dish! The “classic” Indian curry ingredients are all here (chicken, onion, garlic, ginger, tomatoes) and as for the spices – oh the spices! This recipe also goes through the typical steps of Indian cooking: first temper the whole spices in oil or ghee; in this case it’s cumin seeds (be careful not the burn them!). Then add the onions so that they absorb the flavors released by the cumin. Garam Masala, the flavorful powdered spice mix goes in towards the very end, more like a seasoning. The process that Ashley describes opened me up to a whole world of cooking; it’s what inspired me to become a chef! (Thank you Ashley of My Heart Beets for permission to include your image!) 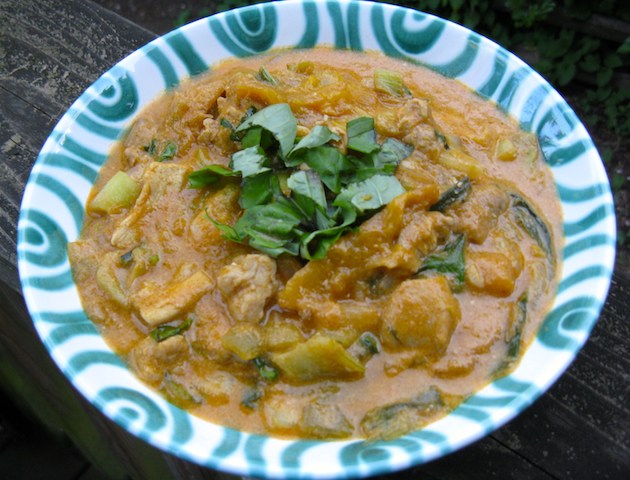 What makes Thai food so special is the way it harmonizes the “core” flavors as perceived by the tongue: sweet, spicy, and salty. This dish is exemplary. The curry paste and optional chili peppers pack a spicy punch. The coconut aminos add the salty aspect that you would usually find in soy sauce (or fish sauce). And the mango balances it all out with a sweeter side. I also love the idea of adding bok choy – this green veggie is SO healthy and packed with nutrients, not to mention that it goes great in curries. (Photo credit to Alisa; check out more yummy recipes on her blog Paleo in PDX!) 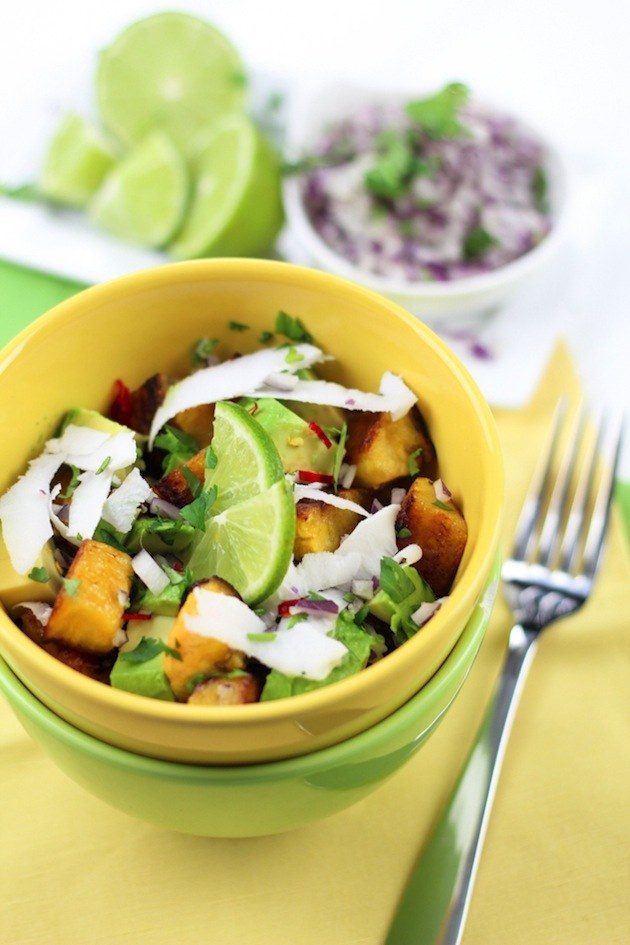 I really am daydreaming of this chicken curry recipe! Sonia, the Healthy Foodie was inspired by this recipe from the blog I Breathe… I’m Hungry. Plantains, avocados and cilantro mixed in with peppers and a coconut milk base… puts me right back on the Thai beach where I belong, inside my head anyway. Sigh… (Sonia kindly let us reproduce an image from her blog, The Healthy Foodie. Thanks again!)

Here is a tasty chicken curry recipe from our own website: 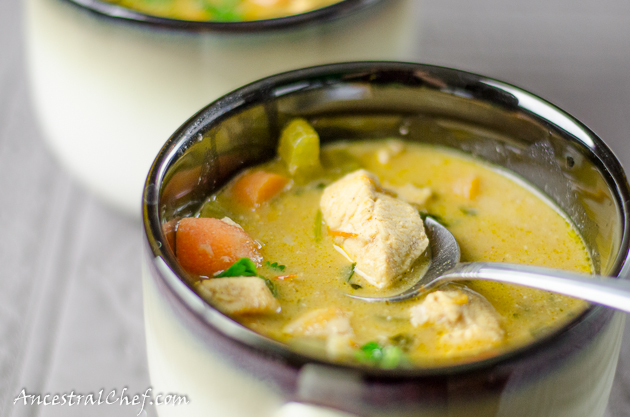 This curried chicken soup is more French style than Asian… it’s a typical chicken and veg soup with just a bit of curry powder in the mix. Sounds like the perfect cure for a cold – or just a cold day!

While eating these delicious meatballs over rice as recommended wouldn’t be Paleo, I do love the idea of them over a warm salad or as a standalone meal!

Eileen thoughtfully provides two versions of the curry sauce that can go into this preparation, a seeded version and an alternative for those on a strict AIP (Autoimmune Paleo) diet. Also, mango goes in this curry and for me that makes it just right.

Don’t be thrown of by the strange terminology in this ingredient list … aubergine and courgette are just alternative names for eggplant and zucchini, most often heard where British English is spoken. One ingredient you may not have though, is garam masala. You can make it yourself by grinding the spices it contains but I recommend buying it in the store because if it’s Indian flavor you’re after, this spice blend is the key to success in this recipe and many others.

This recipe requires a crock-pot but the ingredient list is fairly simple. It highlights the basics of most Indian dishes: onion/garlic/ginger/hot peppers mixed in with powdered spices, chicken and coconut milk. If you start poking around the world of Indian cuisine, you will start to see this formula pop up again and again.

Another recipe that requires a crock-pot, this one keeps it simple in terms of amount of ingredients but a few things stand out as obstacles to me. Unless you love Thai cooking, you might not have fish sauce and pre-made curry paste already and you’ll have to go out and buy these. Also Sarah Lynn uses a bag of mixed frozen veggies (a Thai blend, even!) but I always like to choose my own so I’d probably do that instead.

I didn’t realize that cuisine from the Caribbean island of Trinidad had so much Indian influence! This simple recipe is similar to the Thai curries above but instead of curry paste, it just requires curry powder. The problem is that there are so many curry powders to choose from and the recipe doesn’t specify. But you can just pick the one you like, or try out different ones in this dish to see which comes out the best!

Using a crock-pot, this chicken curry is pretty effortless. You just chop up some chicken and veggies and chuck in the additional curry spice, condiments, and coconut milk plus broth. I love the way she uses an immersion blender at the end to blend everything but the chicken so that it ends up in a saucy mix instead of chunky bits. The crock-pot softening effect probably aids in making the blending super fast and easy.

This is actually a guest post on Stupid Easy Paleo from the Merrymaker Sisters. The spices are pan-Asian but the rest of the ingredients are more western (zucchini, mushrooms and pumpkin puree). This recipe seems subtler and a little easier to take in if you’re serving to someone who is not familiar with proper Asian curries.

This easy curry from Michelle of Nom Nom Paleo lets you choose your curry paste flavor and includes squash and frozen veggies. I would take the time to chop fresh ones but if you’re in a rush, the frozen option can save time. The apple juice, although optional, is an interesting add-on that I’m curious to try!

I like the ease of this recipe, and the fact that it doesn’t require any weird ingredients. She also recommends serving this alongside some cauliflower rice as it comes out a bit like soup and you’ll want something to absorb a bit of that delicious sauce.

This quickie recipe is super straightforward. Don’t worry if you don’t have shallots as the recipe says; sure they’re softer and subtler in flavor but in a big saucy mix, onions should suffice.

Although more obscure, it’s great to see kaffir lime leaves and fish sauce, two classics parts to Thai cooking which, if you’re not already in the know, you should familiarize yourself with NOW. Kaffir lime leaves are used like bay leaves- added whole to infuse the dish and removed after so as not to be eaten. Fish sauce may smell a bit off, but trust me on this: it’s the secret key to great Thai food and when cooked, it tastes great.

My love of Thai cooking started in Chang Mai, where I took a 1-day class in a cooking school when I traveled through Thailand in 2010. All the students learned how to make a curry paste from scratch and I chose the Panang. Pretty similar to red curry paste except for the infusion of ground peanuts, this is my favorite curry paste by far. The homemade recipe provided by the Domestic Man keeps it Paleo by using cashew instead. He also makes it simple by providing step-by-step photos.

Here’s a great “fusion” recipe because it uses curry and spices alongside more traditional European ingredients like squash and sage. Blogger Andrea also includes a great cauliflower rice recipe to include as an accompaniment.