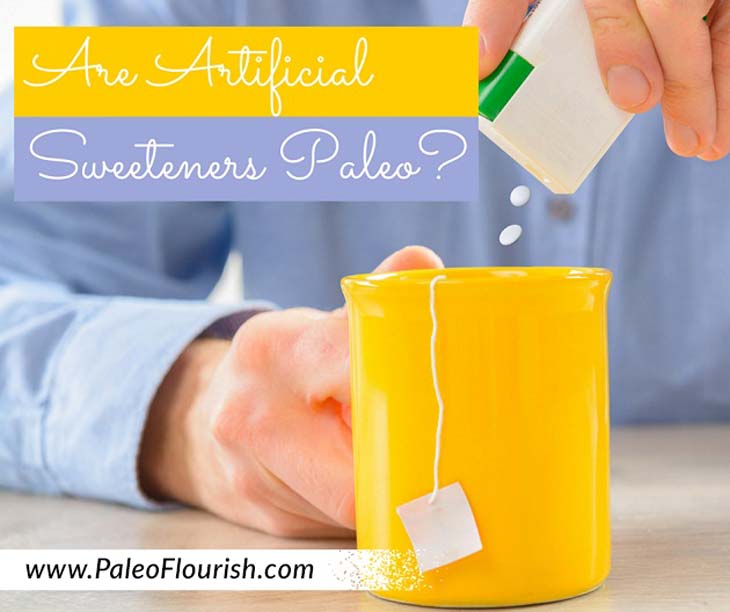 And that’s no surprise; primal humans often found that sweet things like fruits were packed with vitamins and minerals that gave them the energy to survive. In addition, sweet usually meant “safe” when it came to food in the wild.

Because of this, people are somewhat hard-wired to enjoy a sweet treat.

Nowadays, the Western diet is jam packed with sugar in every food you can think of. The difference, though, is that where there’s sugar now, there’s not necessarily nourishment (nor is most processed food safe if you take a long-term view).

But what about artificial sweeteners? No or very few calories, so what’s the harm, right?

Artificial sweeteners come from a variety of sources, from plant materials (in the case of xylitol) to straight-up chemical substances (such as the five chemically created molecules approved by the FDA – acesulfameK, aspartame, neotame, saccharin, and sucralose).

The chemically-created sweeteners are formed through a variety of mechanical methods, such as substituting hydrogen and oxygen atoms with chlorine atoms. This manipulation is what makes the sweeteners hundreds of times sweeter than natural sugar.

Unfortunately, even if our bodies can break down some sweeteners, they contain no nutrients, and some contain the compound phenylalanine, which some people’s bodies cannot process. This compound is linked with brain damage, and the FDA is required to put warning labels on products that contain the sweetener aspartame because of this danger.

Additionally, artificial sweetener-related cancer has been reported in rats, but there have not been enough long-term studies to find out of cancer may be a risk factor for people who consume artificial sweeteners as well. However, at least one study did analyze the overall health risks caused by fake sugars; researchers found a high correlation between consumption of artificial sweeteners and the onset of metabolic syndrome, cardiovascular disease, and learning disabilities.

Perhaps most importantly, artificial sweeteners have 2 fairly big downsides, regardless of whether they’re “natural” or “chemically processed.”

1. First, in both clinical trials and anecdotes, artificial sweeteners tend to encourage overeating and cravings. One relatively credible theory for why this happens is because our bodies expect to get some nourishment (vitamins, minerals, and calories) out of the sweet foods we eat, and when we don’t, our body responds by demanding more of that food to try to make up for the shortfall. In addition, artificial sweeteners set off the same neuro-chemical reactions that often lead to sugar addictions and continual cravings.

2. There’s an increasing body of research that shows that artificial sweeteners (including xylitol) may disrupt our gut bacteria in adverse ways.

Mark Sisson says: “There are other potential negative effects to artificial sweetener usage, including gut flora disturbances, the promotion of psychological dependencies on sweets, and long term safety issues. Am I going to use the stuff? No.”

Chris Kresser says: “Despite some successful short-term weight loss studies, I don’t think the potential therapeutic effects of artificial sweeteners have been demonstrated clearly enough thus far to warrant widespread consumption, especially given the conflicting links with disease risk and the questionable influence on appetite regulation and weight control. Ultimately, while artificial sweeteners are perhaps not as scary as some might believe, I don’t recommend including them in your diet.”

So are artificial sweeteners Paleo?

Because of their negative effects, artificial sweeteners aren’t the answer to your sugar cravings.

But What About Stevia?

Yes, stevia comes from a plant so it’s often not considered “artificial,” but we generally don’t consider it Paleo either – if you must use an artificial sweetener, then it’s probably the best of them all under the current research. For more about stevia on a Paleo diet, read this detailed article.