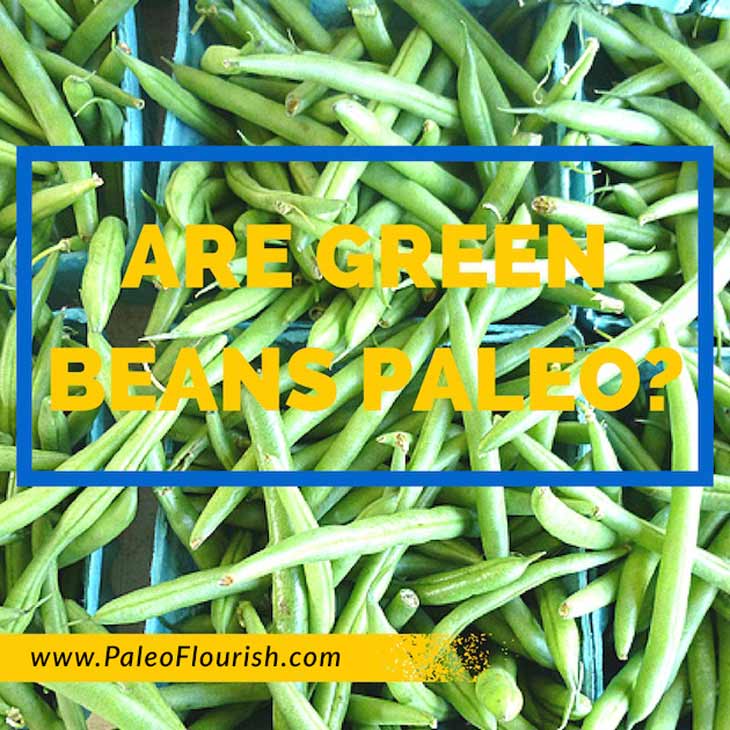 I was a really good kid. No kidding. I slept anytime and anywhere as a baby, I was a star student, and I never really got into much trouble.

But yeah – in some ways, I was also a nightmare. For instance, trying to get me to eat vegetables or do pretty much anything that I didn’t like was almost impossible. Or at least very painful for whoever was trying (usually my mom).

Oddly, though, I liked green beans. I honestly can’t remember another vegetable that I liked.

Fast-forward – I’m Paleo now and eat a much wider variety of veggies and other foods than I did when I was a kid. (As an aside, it’s now me who tries to get my mom to eat vegetables. Oh the irony…)

In any event, today’s post is dedicated to that one vegetable that I actually did like as a kid…

I could beat around the proverbial bush, but why do that?

You might have read our article on Why Legumes Are NOT Paleo and thought that green beans also aren’t Paleo, but as I’ll explain in more detail below, green beans (unlike other legumes) have very few proteins that will harm your digestive tract, are lower in phytates so that nutrients are more available to your body, and are less likely to disrupt your gut bacteria.

First, here is a quick video explaining this:

But Aren’t They a Legume?

Technically, green beans are a member of the legume family, which I suggest that you generally avoid as part of a healthy Paleo diet.

And technically, green beans haven’t been eaten all that long by humans, since they are mostly the result of selective breeding by humans.

But none of that matters. Here’s why:

As true as everything I’ve written above is, there’s one more important point. A few people do experience digestive issues when eating green beans.

This is not the case for most people, but if you don’t feel good when you eat green beans, then definitely don’t eat them! Nothing makes more of a difference than how you feel.

For many of the same reasons, peas are also Paleo – check out this article for more on that.

I can eat green beans pretty much however they’re cooked. Maybe it’s a bit of reminiscence for my childhood.

If you want a really delicious recipe, though, head over to NomNomPaleo’s roasted green bean recipe and give it a try. It’s quick, easy, and super-delicious.

Here some other Paleo recipes with green beans as an ingredient:

7. Green Beans with Bacon and Mushrooms

What are your favorite green bean recipes? Do you experience digestive issues with green beans? Let me know in the comments below!

Images from sxc.hu and flickr.com

[…] Short answer is that they are Paleo even though they are a legume. If you’re interested in why they’re Paleo, then take a look at the video below and the article here. […]

Are long beans the same as green beans?

If you mean what are commonly called Chinese Long Beans, then they’re different, but likely still pretty healthy. I actually don’t know the nutrient density and toxicity, but like green beans, Chinese long beans are really immature seeds and are part of the vine, so I believe that they have relatively few toxins.

[…] and they’re more pulp? than bean, you’re A-OK. Don’t believe me? Google it. Or just read this great article. Anyway, back on topic — I have to make this. I’m seriously addicted to anything with […]

I loved reading about how you acted as a child! I was the SAME way!! Perfect. But stubborn! I rarely ever did chores. Haha, because I didn’t want to. Though, I regret not learning them (dishes, cleaning, etc) as a habit because now, it’s such a hassle to build habits!

haha…I agree. Tough to build habits now, so I do wish I had formed a few more when I was younger, but it made for a very pleasant childhood, as you probably agree. 🙂

haha…but really, is there anything that isn’t made better by adding bacon?

I just love green beans, what a relief to find out it is hundred % paleo. Thanks for this very informative article.

How much are the effect of beans improved by soaking?

Very much so. Soaking beans makes then much more digestible (and makes the nutrients slightly more bioavailable). Around the world, pretty much every culture that has had access to legumes in the past 10,000 has soaked them before cooking and eating.

I too was wondering about green beans as they are something I have always eaten especially when I wasn’t supposed to eat green peas and carrots because of the sugar in them. I can’t say I’ve ever noticed any problems with them so will continue to enjoy eating them. Thanks for clarifying this subject….

Thanks for clearing this up. I have been avoiding them because I thought that it wasn’t allowed on Paleo
Hooray another vegetable to add to.my menu!