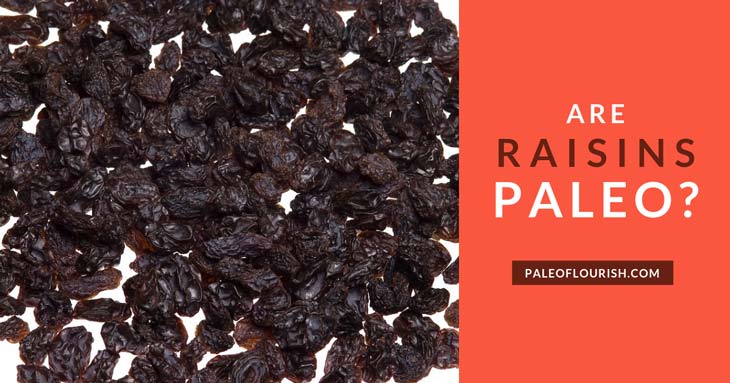 I was recently asked this question on Facebook, and I thought it would be good to write a short post on it so that everyone can benefit from the knowledge.

Raisins are grapes that are often sun-dried or dehydrated. They are naturally high in sugars (33.8% fructose and 31.2% glucose according to Dr. Cordain’s data), and so they usually don’t have extra sugar added to them (like some other dried fruits).

So, Are Raisins Paleo?

Raisins are a natural food without additives or added sugar, and they do have high amounts of some vitamins and minerals (like thiamin, B6, potassium, copper, and manganese).

Their main problem in terms of our health is that they are high in sugars. They’re also very palatable and so it’s easy to overeat them and get too many calories from sugar.

What do the Paleo pundits say – are raisins paleo?

Mark Sisson says: “I think a few servings a week of dried fruits is not a big deal at all – fruit is a natural, fiber-rich, vitamin-loaded food source.”

Robb Wolf says: “So I think it’s just simply folks tend to overdo it. If you don’t overdo it, then it’s really not that big a deal.”

Conclusion? It’s Paleo but only in small amounts.

That photo makes me want raisins, haha! I never eat them on their own, but I have put them in baked goods before, such as the carrot cake I just made, or my morning glory muffins. I do dry my own fruit occasionally, but I usually stick to apricots, and sometimes apples.

For what it’s worth, Dr. Cordain does go on to say that you can eat dried fruit in small amounts (a couple ounces a day max if memory serves), though he’s clearly not a fan of them. This is in the 2010 version at least. Not sure about the 2001 edition.

Thanks Tom – I found the quote from his website, but it’s good to know what his views are in his current book.

Dried fruits is a pretty general term. Most dried fruits (pineapple, mango etc…) you buy in a store have added sugars. You usually don’t find anything added to raisins.

Dave – you’re right that most raisins don’t have added sugars, but I’m referring to the inherent sugar in raisins.

Very helpful and motivating article. I love it when something just seems logical and in line with common sense. I eat raisins like candy and justified it by thinking it’s just dried fruit. Time to go back to the basics…moderation in all things….except fun. Thanks, Louise! This is the first time I’ve read your blog…won’t be the last.