The Benefits of Grass-Fed Beef: Is it Really Better and Healthier? 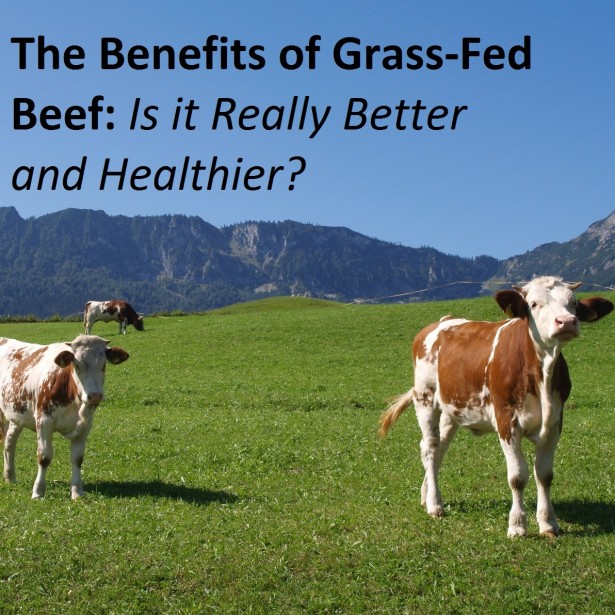 Do you really need to eat grass-fed beef?  Is it actually healthier?  What if you can’t afford it?

In some ways, eating Grass-Fed Beef has become almost synonymous with being Paleo. Whenever someone hears that you’re Paleo, it’s often one of the first things that they tend to ask about.
It’s about time that we revisit some of the facts and myths surrounding grass-fed beef…

What Exactly Is Grass-Fed Beef?

Generally, grass-fed beef is what you think it is, but only in part. Almost every cow in the world eats grass for some of its life (after being weaned off of milk). But here’s the difference: 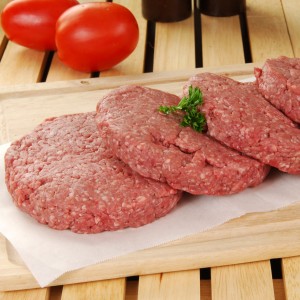 Conventionally-fed cows eat a mixture of grains (mostly corn) and soy in the last few months of their life to fatten them up.

Grass-fed cows are fed grass until they are slaughtered.

That’s the primary difference between grass-fed beef and conventionally-fed beef.

There are other potential differences such as living conditions, slaughter conditions, hormones, and antibiotics, but none of those relate directly to whether or not a cow is grass-fed. In other words, a grass-fed cow could receive antibiotics and growth hormones, even if it’s not typically the case.

There are also gray areas. Some cows are kept in pastures their whole life, where they graze and eat grasses, but they also have occasional access to grains like corn, often placed in large bins by farmers. Not 100% grass-fed, but not conventional either.

With each potential difference, though, make note of words like “often,” “typically,” and “generally.” Some feedlot operations are better than others, and some grass-fed farms are worse than others.  Often, the only way to really know the difference is to actually visit them.

Living Conditions: The way that a cow lives and dies may or may not have an impact on our health when we eat beef, but I don’t think our health should be the only consideration. Although I have no remorse about eating animals, I also don’t think we should unnecessarily put any animal into pain or discomfort.

Most grass-fed cows are raised in conditions that are much more pleasant and less stressful than conventionally-fed cows. They typically have sufficient space to roam, live a life somewhat closer to a theoretically “natural” life, and are treated in a generally more humane manner.

On the other hand, feedlot cattle typically live most of their lives in very confined and cramped conditions, and they often suffer conditions that are both disgusting and stressful.

The takeaway is that the conditions a cow is raised in may or may not impact how healthy the beef is for us, but there are other considerations, and my conscience is one of them.

Hormones: If you talk to pretty much anyone today about the healthiness of eating cattle injected with hormones, you’ll get an almost unanimous response that it’s probably pretty bad for us. Somewhat surprisingly, the dangers of hormones are very unknown and unproven from a scientific perspective.  Adverse effects may exist, but if they do, nobody is really sure what they are or how bad they can be.

There are certainly some studies that claim to confirm increased risk of disease as a result of growth hormones. However, many studies have not been able to find any additional risk.

Chris Kresser wrote a very interesting and well-reasoned article that addresses this, where he points out that humans traditionally ate bulls rather than cows, and bulls naturally have almost 50 times the level of hormones found in cows injected with growth hormones. Doesn’t mean that growth hormones are necessarily innocuous, but it does put it into perspective.

Personally, I try to stick to grass-fed beef.  However, fear of hormone-treatment is not something with which I’m overly concerned, at least until we see better evidence.

Antibiotics: It’s estimated that about 70% of antibiotics in the US are used on animals rather than humans. And most of this antibiotic use is not to treat an illness but rather to prevent potential illness.

There is certainly some cause for concern, as excessive antiobiotic use tends to lead to “super-strains” of bacteria, creating bacteria that are often more harmful and resistant to treatment. In addition, antibiotic use in humans tends to disrupt “good” gut bacteria in ways that are not only harmful to our digestive system, but also not yet fully understood.

It’s unclear, though, how eating beef from a cow that received antibiotics may effect humans. My own concern revolves largely around the fact that bacteria perform many useful functions within our bodies, and it’s likely that eating cows fed with antibiotics has at least a minimal effect on the bacteria in our own bodies. However, the science on this issue is far from settled.

I’m more concerned about antibiotics than I am about hormones, but it’s still not a major driving factor in my own decisions to eat grass-fed beef.

Obviously, grass-fed cows can be treated with antibiotics just like any other cow, but it’s typically not done nearly as often or without a cow getting sick first.

Pesticides: The basic fear about pesticides is that the grains fed to grain-fed cattle are typically grown with injudicious use of pesticides. Some of those pesticides will undoubtedly be trapped in the bodies of cows and therefore in the beef that we eat.

Again, the science is fairly inconclusive on this issue with respect to the actual effects on humans, but I don’t let that stop me from being concerned in this instance. Pretty much nobody is arguing that eating pesticides is going to make us healthier, so there is only downside to this.

The difference in other types of fat is not very big at all, but grass-fed beef typically has a significantly higher level of Omega 3 fats. I say “significantly higher,” because as Mark Sisson has pointed out, if you’re looking just at the amounts of Omega 3 fats in each type of beef, there doesn’t seem to be a huge difference. However, when you then look at how much Omega-3 was floating around in the blood of the people who ate each type of beef, it becomes pretty obvious that eating the grass-fed beed makes a difference.

There are a hundred places on the internet where you can read about the importance of getting enough Omega-3s (here’s a great article by Chris Kesser), but the general idea is that our bodies need a good balance of Omega-6 and Omega-3 fats.  In modern diets, we tend to get a lot of Omega-6 fats (vegetable oil, anyone?), but not nearly as much Omega-3.  This is bad because our body then uses Omega-6 fats when it should be using Omega-3 fats.  When that happens, our body doesn’t utilize micro-nutrients as well as it should, we get a little more insulin-resistant, and a host of other bad things happen.

Apart from the Omega-3 content of grass-fed beef, there’s some relatively new research that suggests that we don’t actually understand all of the ways in which our bodies react to eating animals that humans have altered in some way or another. This study shows that systemic inflammation was higher overall when human subjects ate “hybridised” beef (a particular type of cow that humans had interbred but not genetically modified).

Taste and Price: I wanted to spend most of this articles discussing the differences in terms of health and ethics, but realistically, taste and price might make a bigger difference to most people on a day-to-day basis.

I’m going to leave the issue of taste alone. I personally prefer the taste of grass-fed beef, but there are many who do not.  Nothing I say is going to make anything taste better or worse to you.

You can probably guess from my take on grass-fed beef that I’m a pretty big fan. And I am.

But there’s a huge caveat…

While grass-fed beef is almost certainly healthier than grain-fed beef, it’s NOT THAT IMPORTANT in the grand scheme of things.

I find that many people get way too hung up on certain issues grass-fed beef, and somehow, it’s become synonymous with being Paleo.

From a health perspective, there are much more important things to think about: Get enough sleep. Don’t eat grains or processed crap. Lift weights occasionally.

These are all much more important things to work into your life.

If you’re doing the important things and still eating grain-fed beef, you’re going to be much better off than someone who is doing the opposite.

However, if you do everything else right and can also eat well-fed animals like grass-fed cows, then go for it. Every little thing helps, but make sure you’ve got the big picture first.

Well thought and written. I do agree that grass fed is better all the way around. It’s not readily available where I live – and the thought of mail order meat – just dosen’t resonate with me.

Maybe – somebody in my locale will wise up and start retailing it. Not yet…..