Can You Eat Raisins on Paleo?

Raisins are grapes that are often sun-dried or dehydrated.

They are naturally high in sugars (33.8% fructose and 31.2% glucose according to Dr. Cordain’s data), and so they usually don’t have extra sugar added to them (like some other dried fruits).

What You Should Know About Raisins

Raisins are a natural food without additives or added sugar, and they do have high amounts of some vitamins and minerals (like thiamin, B6, potassium, copper, and manganese). 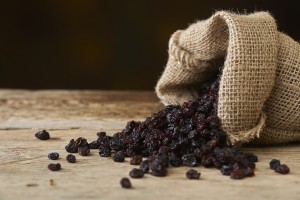 Their main problem in terms of our health is that they are high in sugars. They’re also very palatable and so it’s easy to overeat them and get too many calories from sugar.

Mark Sisson says: “I think a few servings a week of dried fruits is not a big deal at all – fruit is a natural, fiber-rich, vitamin-loaded food source.”

Robb Wolf says: “So I think it’s just simply folks tend to overdo it. If you don’t overdo it, then it’s really not that big a deal.”

So Are Raisins Paleo?

But only in small amounts.