Eat Out Like a Paleo Pro: 18 Tips To Make Your Life Easier (+ Downloadable Book) 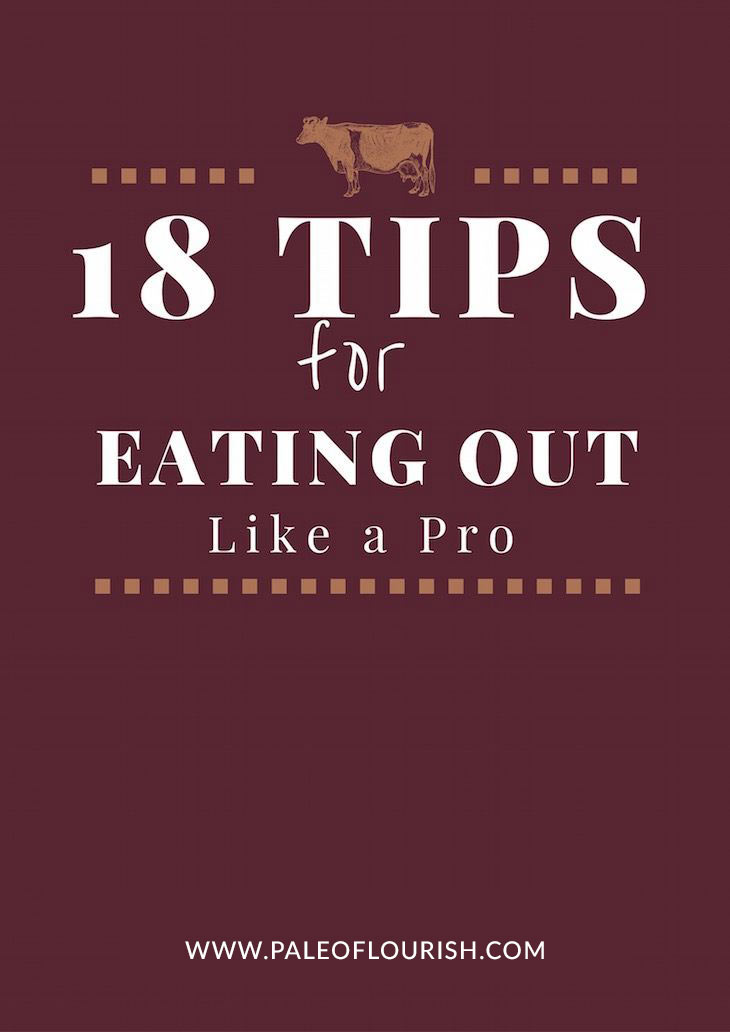 Imagine if you had a home chef who would cook every single meal for you, make it delicious, and also keep it 100% Paleo…

Would you ever fail to eat completely healthy and Paleo food in that situation?

But of course, most of us don’t have a personal chef (I certainly don’t), and because of that, we often end up eating out. A LOT.

Over 40% of Americans eat at a fast food restaurant at least once per week. And that’s just fast food – not even counting regular restaurants which are rarely healthier or more Paleo. And if you weren’t worried enough about American eating habits, over 10 billion donuts are consumed every year.

If you’re looking for some Paleo restaurant reviews, check out this list of restaurants we’ve reviewed.

Eating Out is Not Inevitable…

I haven’t mentioned this on the blog or on YouTube, but I actually haven’t eaten out in over 5 weeks.

That may not seem amazing to many of you, but I live in New York City right now, and eating out (or at least ordering in) is the norm here. I’m betting that my friends cook less than twice per week.

Still, Louise and I made a conscious decision to not eat out for a while just because we realized how problematic it was getting for us. Among other things, it’s almost impossible to avoid Omega-6 cooking oils.

Now…we’re not going to avoid eating out forever. Lately, we’ve been inviting friends to dinner at our place more, but we know we’ll eat out in the future.

Eating out is a big social occasion, and we don’t want to avoid hanging out with friends just because we’re stricter with our health.

So first of all, I’ve got a video for you…in which I cover 4 Awesome Ways to Make Eating Out Healthier and More Paleo

Here are 18 Tips for Eating Out Like a Paleo Pro

Here’s a newly created infographic to go with this post – please share and pin it! (To embed the infographic on your blog, just copy and paste the embed code below.)

This list of tips is not about being ideal. Ideal is that you buy fresh, local meats and produce and cook them yourself.

But that’s not always going to happen, so you need to have ways to mitigate the damage when you go out to eat.

Before You Go Out

Like I said, these are tips that have gotten me through a lot of eating out while still trying to stay Paleo. Nothing will keep you from occasionally having to compromise your diet, but that’s OK. It’s just a diet, and you can always eat better at the next meal.

Good Paleo menus are hard to find in NYC. Best places Ive been to are Hu in Manhattan and Kinfolk in Brooklyn.

I have 2 restaurants that are my go to for eating out.
1) In N Out: hamburger (sometimes a double), grilled onions, protein style (lettuce wrapped), and absolutely no sauce of any kind!
2) Moon Dog’s Cafe: it’s a little cafe that has worked with me to create an acceptable dish. So much so that when I walk in to order I hear, “it’s the allergy woman, make her usual.

I hope what they serve has nothing to do with the name!

“Tell then you’re allergic” is terrible advise! Unless you’re actually allergic you should not throw it around like its nothing. There have been tons of articles recently about how people on gluten free, paleo, and other diets throwing around “allergic” is actually really harmful to the people with real allergies. It desensitizes servers to the issue, because they no most people are just trying a gluten free diet and not actually allergic. Just telling them you prefer gluten free choices is better, you don’t have to lie, you don’t have to be pretentious, but don’t tell them you’re allergic if you aren’t.

I understand your point well enough that I’ve considered changing my stance on telling people I’m allergic. However, I think that desensitization (in this context and in many others) is more of a myth than a reality. Restaurants are highly concerned with causing illness, and I haven’t seen any evidence (anecdotally or in studies) that they’re actually becoming desensitized to gluten allergies. Honestly, though, if I thought that were factually the case, I’d completely agree with you.

I can say as a server with several food allergies that Alice is 100% correct. The term “allergic” is so overused now it’s ridiculous. Just like we tell our children, honesty is always the best policy. Just tell your server the truth & I promise they will be just as likely to remove it if not more. Plus you would have introduced someone to paleo. Win/win.

I agree with all of you guys to an extent. But seriously Erin, how many times have you been to a Resturaunt that DIDNT have some carless teenager waiting your table that could care less about your diet. Until you “lay it on a little thick,” they could care less. They’re just looking for that weekly check so they can donate, ever so slightly to their student loan debt, which has them smoking weed on breaks. Seriously tho, lighten up! Its all good.

………and if ALL ELSE FAILS, just pull out your eppie pin and threaten to stab your waiter if they don’t get it right…..personally I’d rather embellish on or stretch the truth rather than risk NOT GETTING their ATTENTION.

Hi I recently started Paleo living about a week ago. I have had an occasional non paleo item primarily beans such as hummus last night but I had it with veggies and told them to give extra veggies instead of the pita bread and I only had a small amount of hummus. I also had a few beans and some red potato. Ok enough with my confession ha! I havent found it to be too difficult to stick with it but you do have to be very inquisitive. I found out somewhere that they often put butter on your steak at a steak restaurant. I asked at Longhorn and the waitress thought they put butter so i asked for no additional butter or oil on anything. Apparently they used olive oil but either way I got it dry. I also went to a local restaurant here in Akron ohio and I ordered the seafood platter with veggies and also said not to put any butter or oil. Not the best quality food there but what can ya do. I went to chipotle and I order a salad with no rice or beans and extra stir fry veggies and extra salsa. I didnt get the guacamole that time just to keep it lighter. Last night went to the rail and got the naked burger (this was the hummus place as well). I didnt ask about the oil though so I may have consumed some vegetable oil since I got the sauteed onions on it and also added a fried egg. Anyway thanks for the info! Anyone have any tips on weight loss and paleo and crossfit? Ive leaned out a bit but I started crossfit a few weeks ago and havent drank in a month. Just wondering if I need to tighten up the paleo eating and count calories?

Interestingly enough sometimes asking for olive oil is not enough. I found out last week that the commissary at work, run by Wolfgang Puck, uses what they call Olive Oil but is actually a mix of Olive and Canola. I can’t remember exactly how I extracted that info from the manager but I was shocked as the chef had told me he was cooking with Olive Oil. Not sure if this is a standard Wolfgang Puck thing but worth asking if you end up at one of his restaurants.

Thanks Stacia – it’s fantastic you asked! It’s an excellent point – a lot of olive oil that restaurants use is a mix of olive oil and canola, so it’s great to check.

Great tips but eating meat out is not as simple. Meat needs to be grass fed and finished or the fat profile is off. This is the hardest part for me.

We definitely prefer grass-fed meat, although we’ll make exceptions when eating out. The fat profile is not nearly as different or important as many folks claim – you’d be much better off avoiding almost all nuts, all chicken, etc. (forever), if you’re actually worried about Omega-6 to Omega-3 ratios.