Eating Out Paleo – The Restaurant at Meadowood, Napa, CA 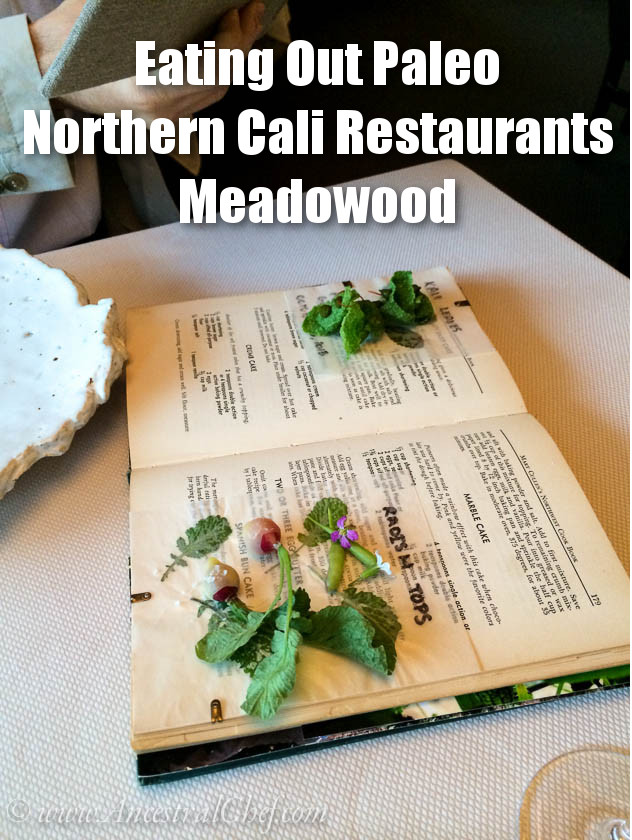 How Great Food Can Inspire and Will Keep on Giving

I was already a bit apprehensive when we started the long drive to Napa. Making a reservation at Meadowood had been one of those spur-of-the-moment you-only-live-once sort of decisions when you hand over your credit card, close your eyes, and hope everything turns out ok.

I was hoping to be wow’d but deep down, I was already prepared for disappointment. I’d eaten at some of the top restaurants in the country already (including four 3-michelin star ones and some crazy-cheap but amazing hole-in-the-walls). So how could Meadowood deliver me an awesome experience to make it worth the hefty price-tag?

When we arrived grumpy at having sat for 2 hours in traffic, they completely brushed aside the fact that we were almost half an hour late and instead seated us immediately. The dinner had been in celebration of my birthday (which we had told them), and the director of the restaurant greeted us with this personalized card. 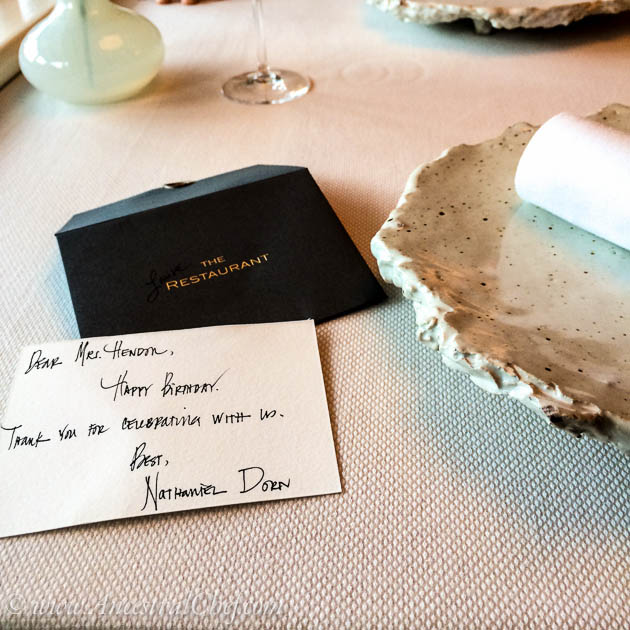 I was touched, but really, the true inspirations came with the food (you can see the full menu below).

It’s hard to describe how ingenious combinations of fresh and local ingredients can change my life, but it did.

I was so moved, I stopped by Whole Foods on my drive home and bought some fresh carrots to marinade in champagne. LOL

Then I proceeded to sign up for the Science & Cooking: From Haute Cuisine to Soft Matter Science course offered by Harvard on EDX. I know, I’m a geek, but the experience left me with a huge thirst for more. More flavors, More experiments, More creations, More knowledge about my food.

A Bit About The Restaurant at Meadowood

First off, Meadowood is a 3 Michelin star restaurant set in the beautiful grounds of a luxury golf and spa resort. The chef, whom we got to meet at the end of our life-changing meal, is 36-year-old chef Christopher Kostow.

His explanation of his culinary philosophy is exactly what I experienced: “We’re not here to shock anybody,” he says. “It just tastes really good. There’s a lot of finesse, a lot of technique and it’s very delicate. We’re not hitting you over the head with anything. I would say my food is thoughtful.”

I would perhaps go further and say that his food is not only “thoughtful” but inspiring.

How Paleo is Meadowood?

From a Paleo perspective, this is your ideal restaurant. The restaurant staff called us 3-4 days prior to our reservation to ask for our dietary restrictions (we specified gluten-free, dairy-free, and no seed or vegetable oils).

But beyond just the basic Paleo ingredients, Meadowood also perfectly exemplified the local food and the farm-to-table ideology. They even had a forager on staff when went and foraged for vegetables, flowers, etc from their garden! (It sounded like a fantastic job until I found out he had to get up at 3am!)

As with most high end restaurants, the menu was a set tasting menu consisting of a bunch of courses with small bite-sized amounts of food.

We started with some crisp Crudités from the garden Fermented In Champagne Yeast. 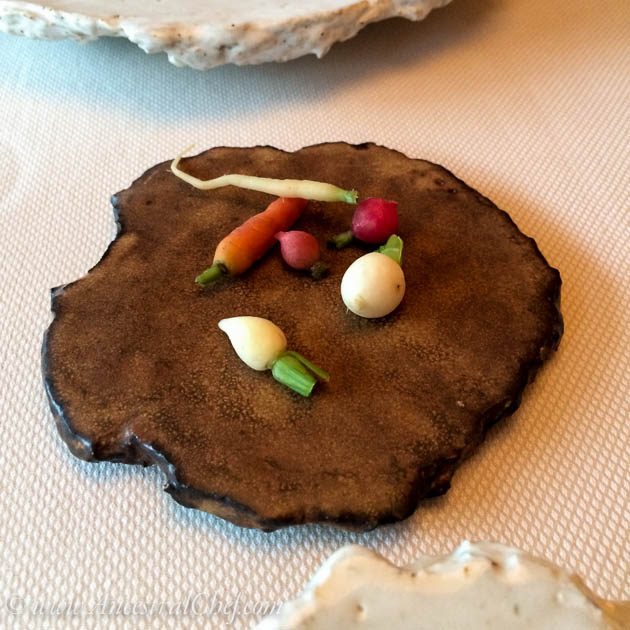 Next were some radish tops dip frozen in liquid nitrogen dipped in butter (we told them they could cook in butter despite the no dairy rule) and some kale chips served on an old cookbook (inserted into the cookbook pages are photos from the restaurant garden). It felt light they had given the presentation a lot of thought. 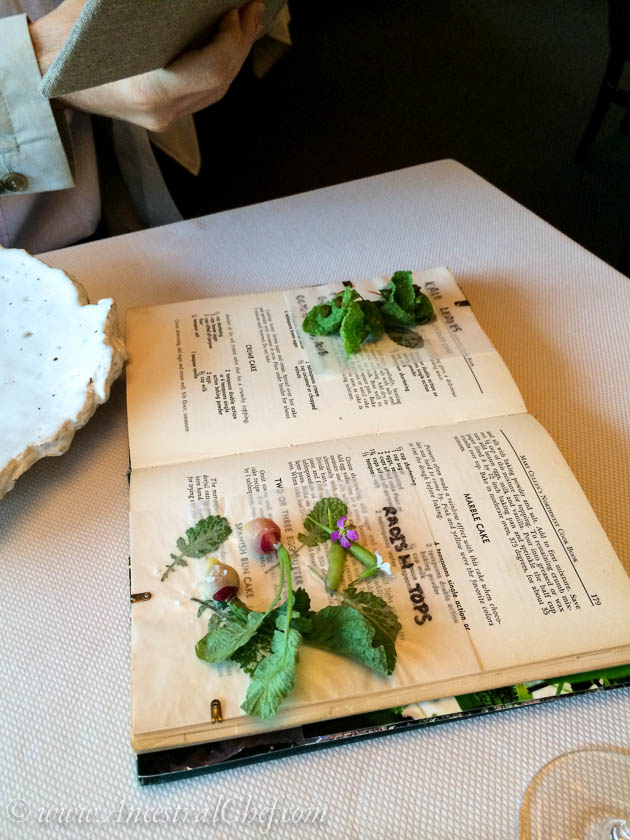 The amuse bouche continued with popcorn chips served over ground popcorn (given the small amount of corn present in these, we were ok with having them). 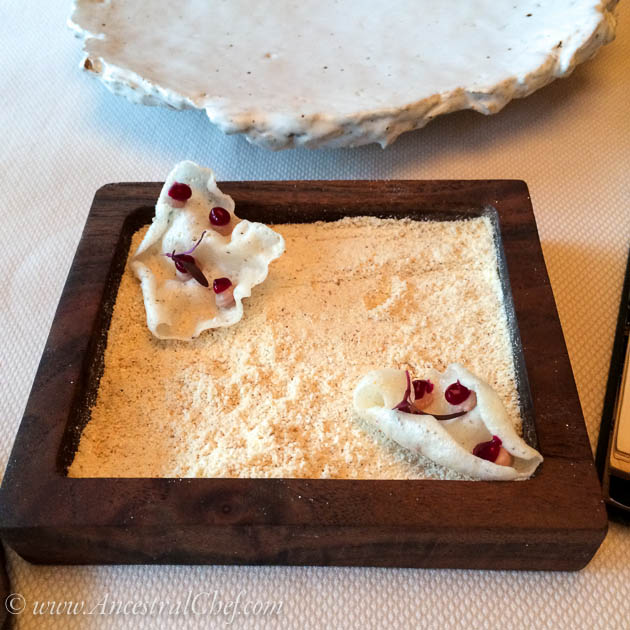 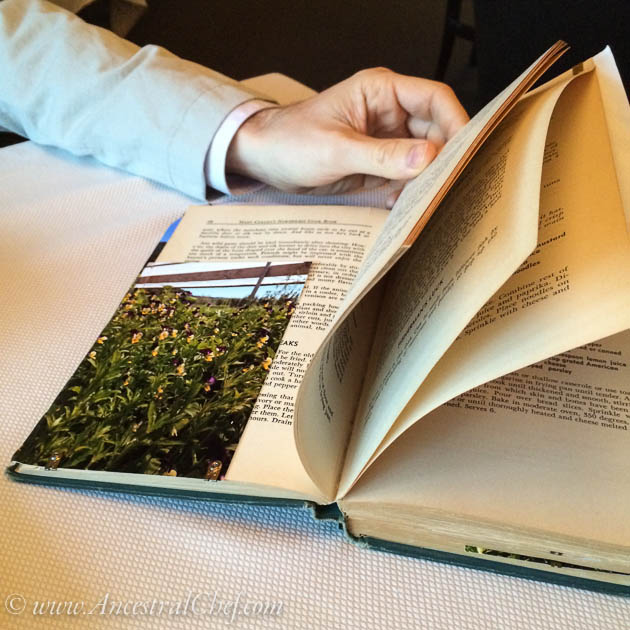 Then the appetizers started with some smoked rancho Gordo beans with avocado puree and cilantro flowers (the beans had been soaked prior to cooking to reduce the lectins in them). 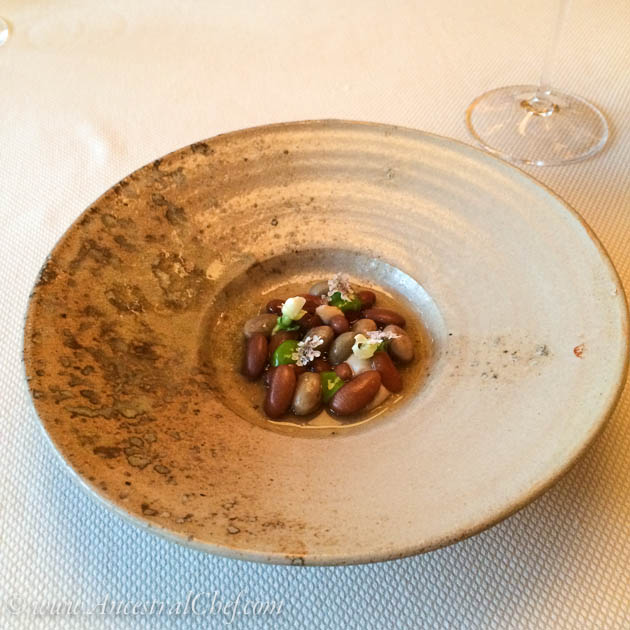 This next dish was my favorite – daylilies stuffed with lobster, grilled and topped with caviar. The daylily was exquisite (and apparently very easy to find growing in California)! 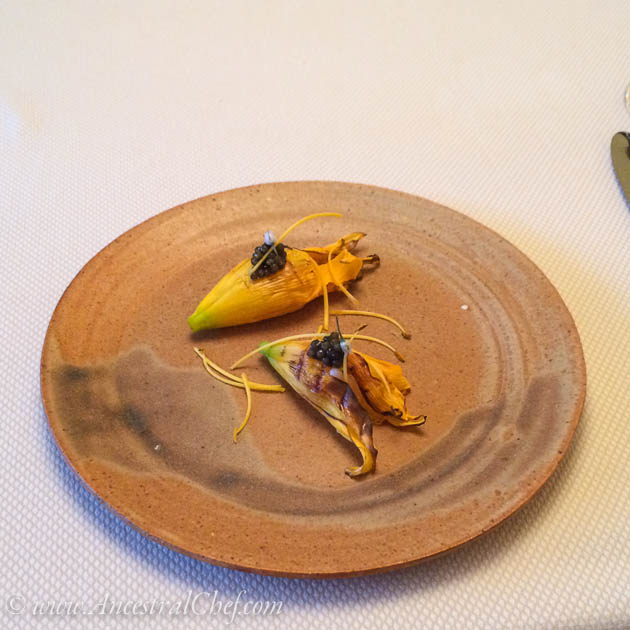 Then one of the servers brought out this uncooked rutabaga to demonstrate how our next dish was to be cooked (baked in a meringue of garden soil). In my head, I was thinking “baked in mud? That’s sooo PALEO!” 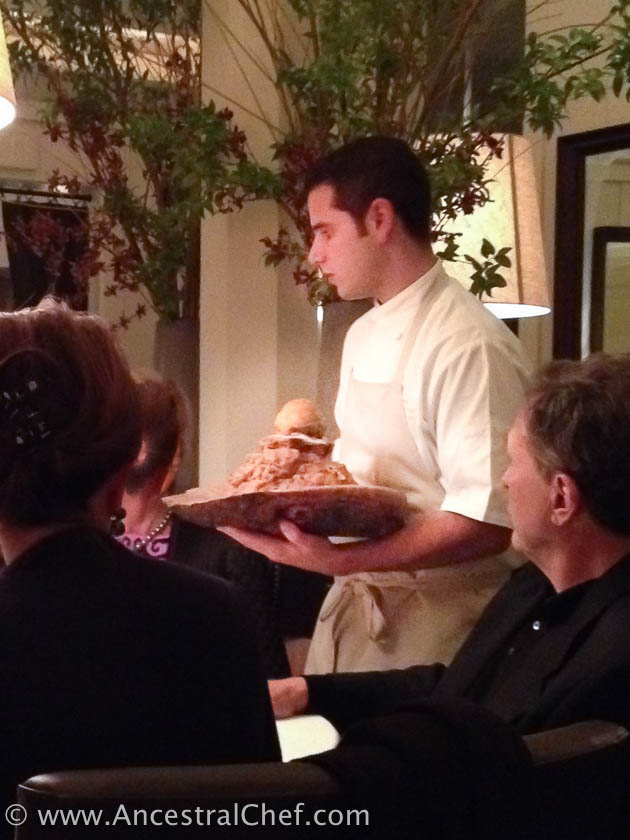 And this is what the dish looked like (with shaved wild pecans and white truffles): 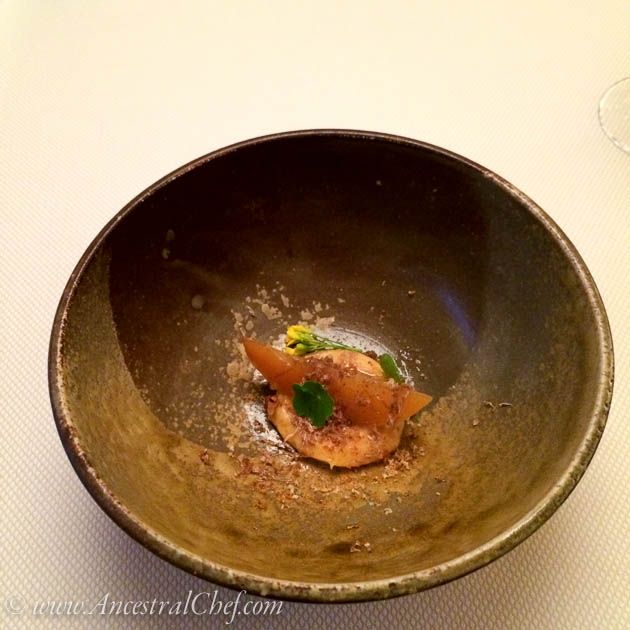 This is the Matsutake mushrooms with Monterey squid. According to our server, these mushrooms are wild and typically found at the base of pine trees. Originally from Japan, these mushrooms can now be found in the US as well, and the ones we ate were foraged in Washington State. 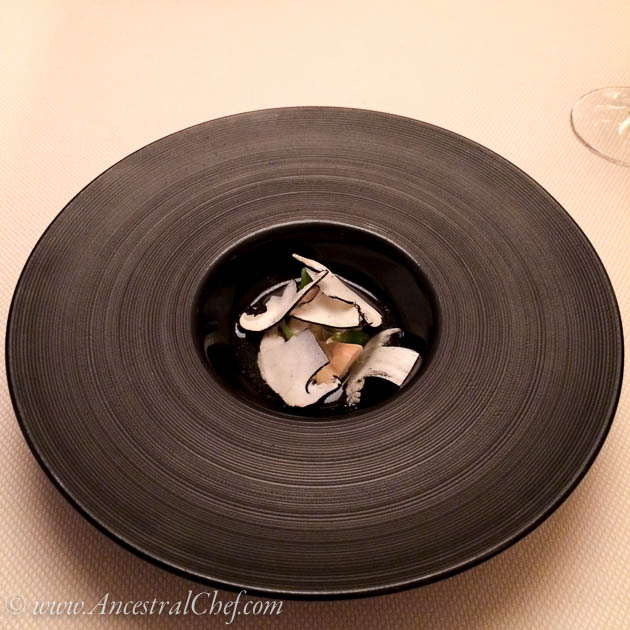 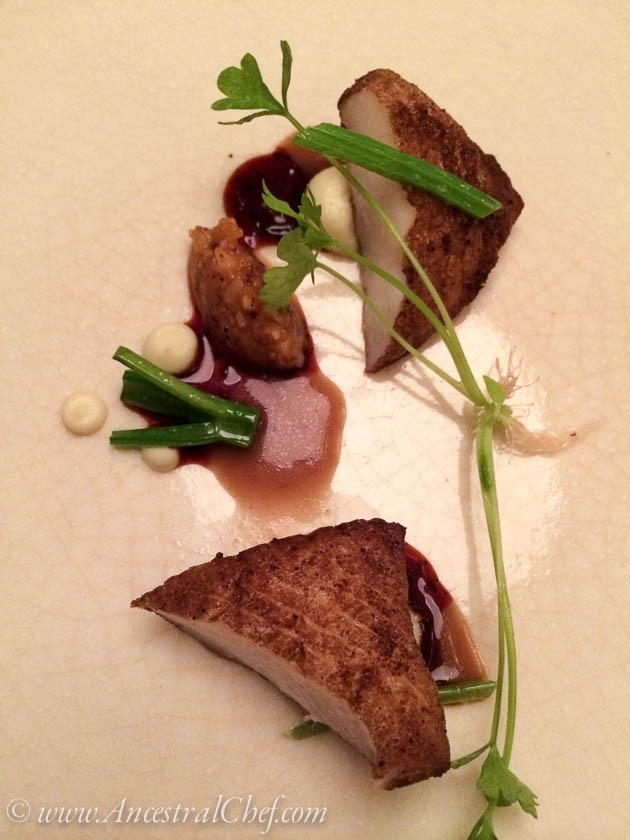 I love tea, and what they served next was a squab “tea” – technically it was a the broth that they had cooked the squab in. The “tea” was filled with aromatics e.g., wild blackberries and radishes from the garden (foraged by the forager – I can’t get over how cool that job must be!). 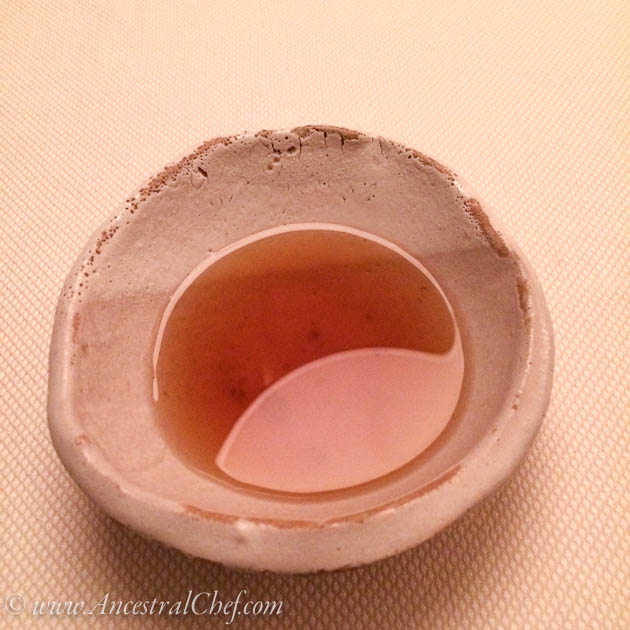 And here’s the squab (a young domesticated pigeon): 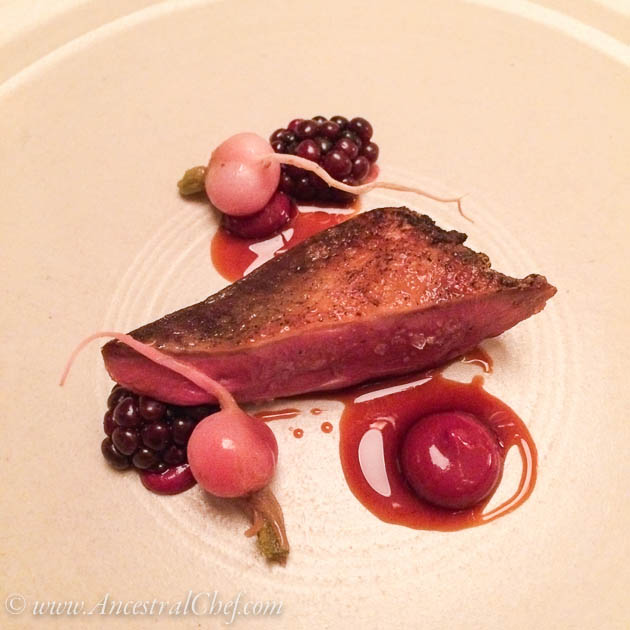 I got the breast meat pictured above, and Jeremy got the long leg with the claw that freaked me out a bit. 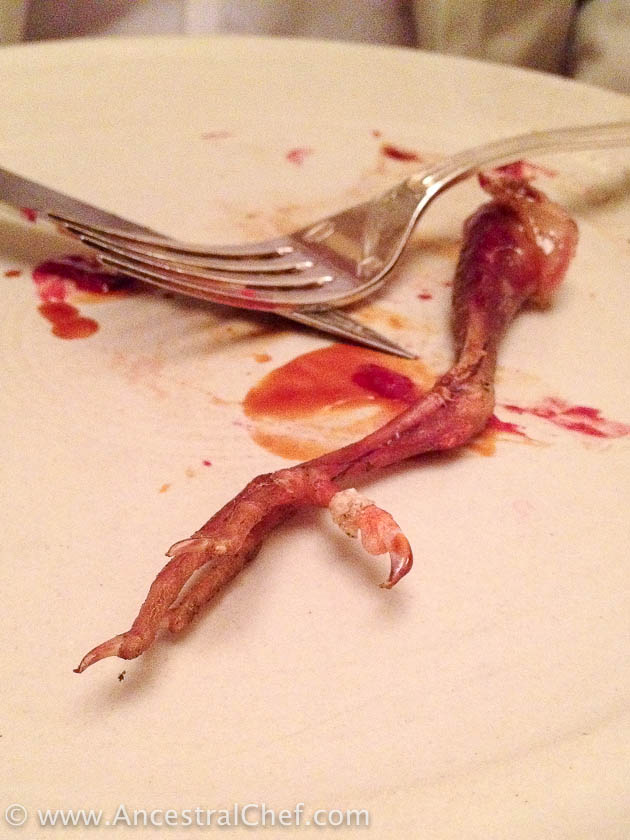 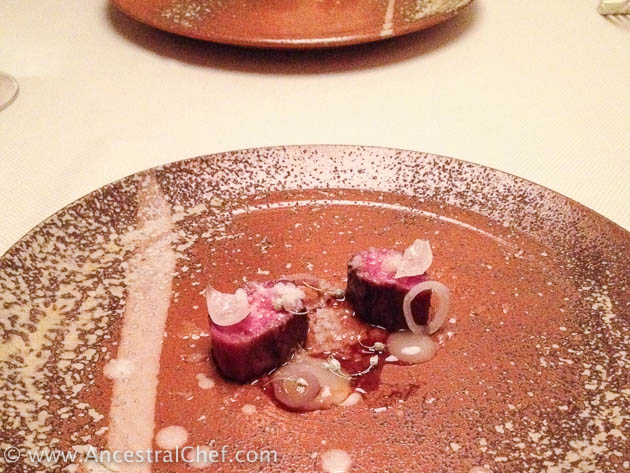 And to finish the entrees, we had a clean garden salad with thinly sliced turnip and turnip vinaigrette. They recommended we eat it with our hands, which we did.

Then the desserts started with a fresh date orange julius. It was creamy without having cream and orange-flavored without being overpowering, and at the bottom of the cup, there was fresh date puree! 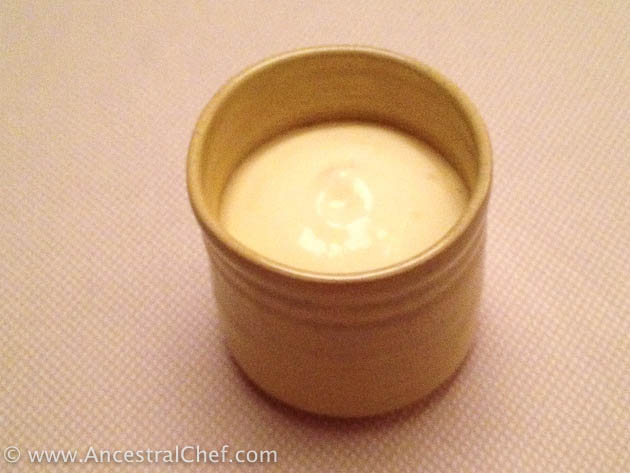 Next we had “noodles” made out of white chocolate with candied carrots and marzipan. 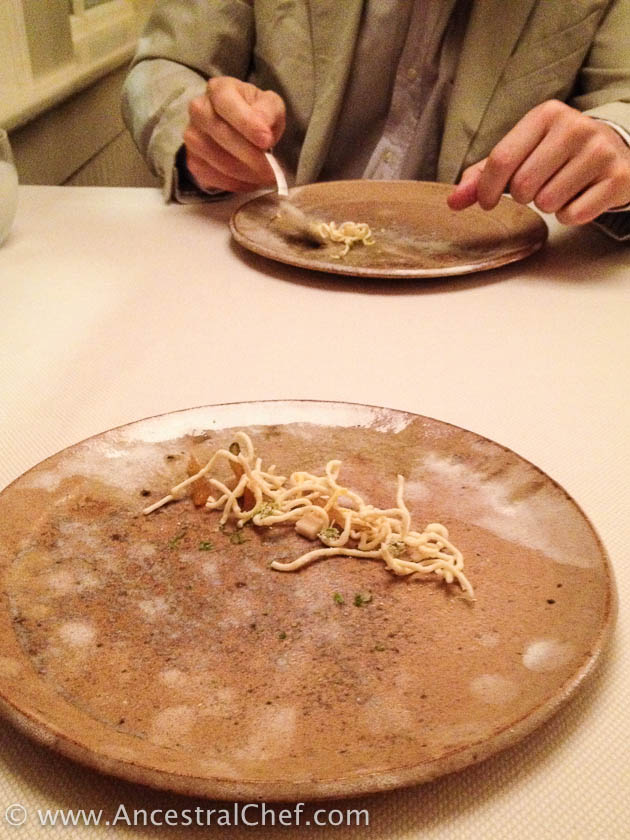 And to finish, we had a beautiful spread of the stages of the grape petits fours, served in a boat made with grape leaves and grape vines. 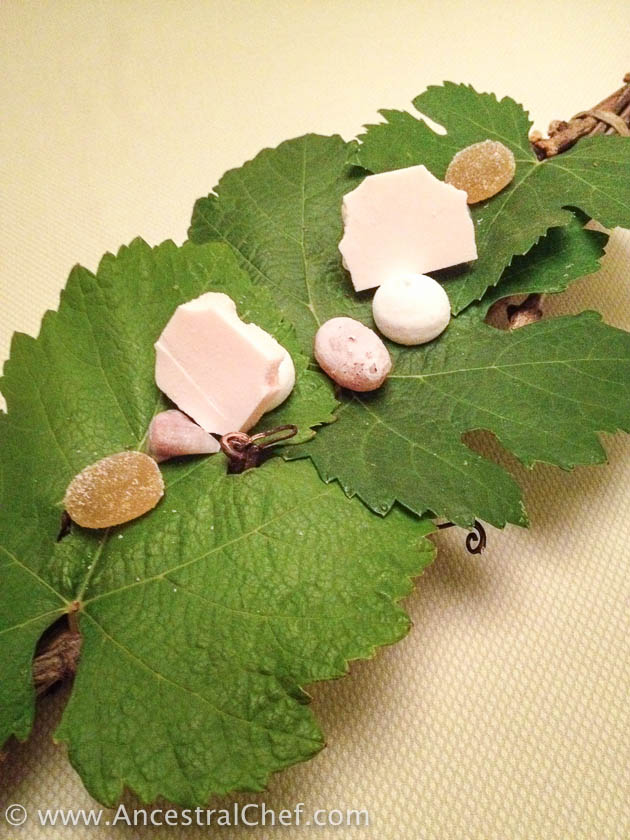 Gawking into the Kitchen

And to end our meal, we got to tour the kitchen and have a quick photo with Chef Christopher Kostow. 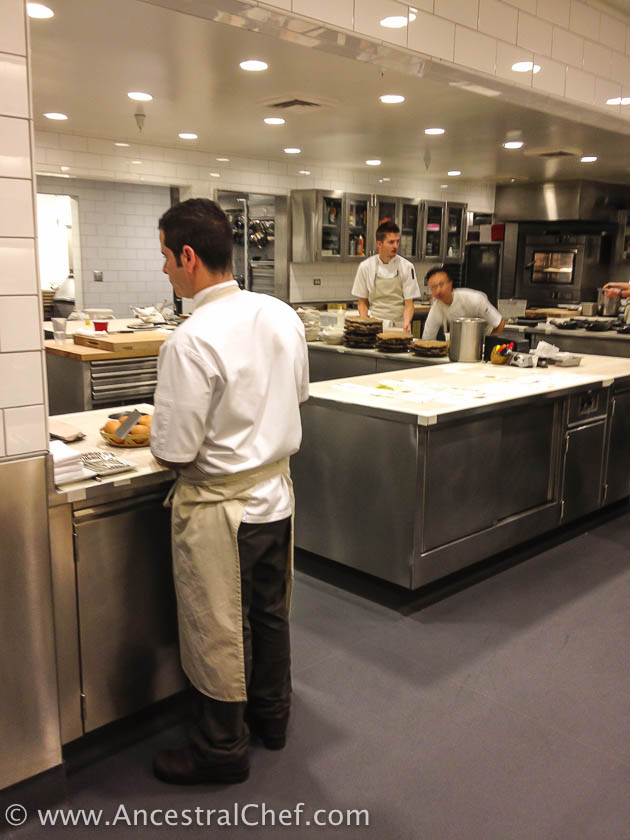 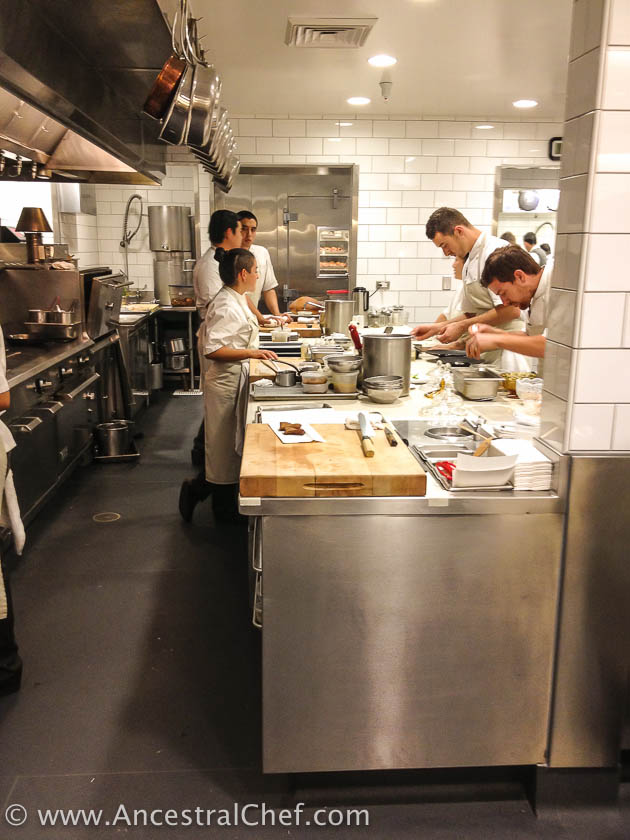 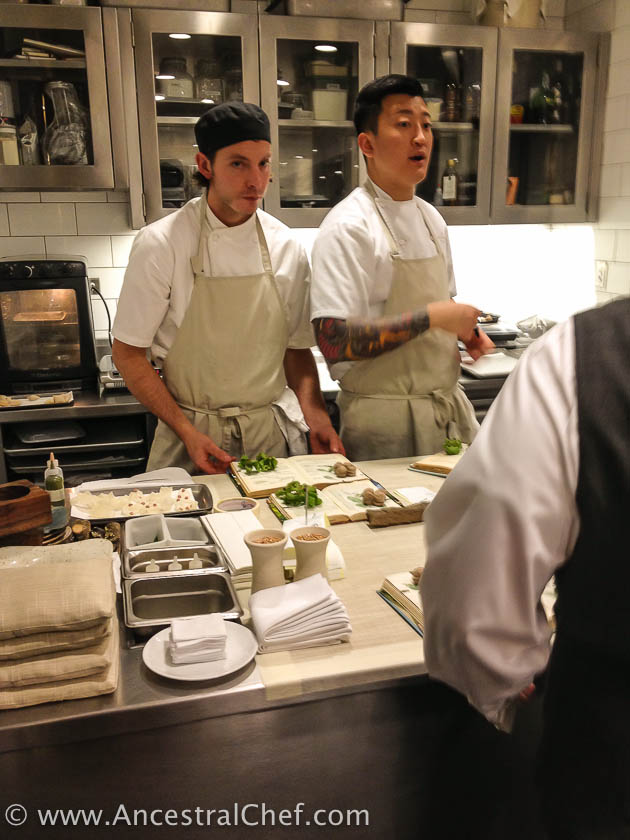 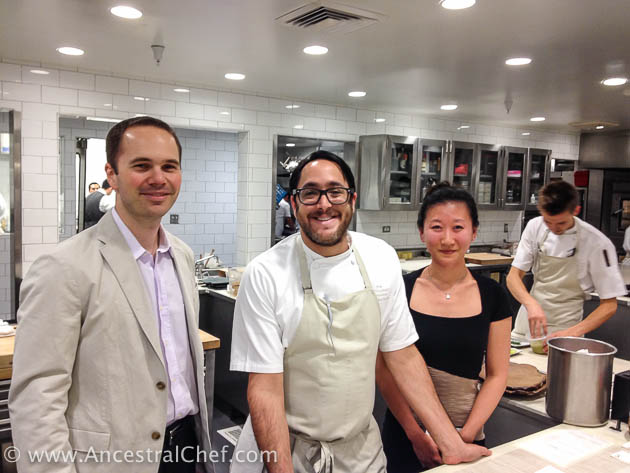 Have you ever had an inspiring dining experience?

If so, where was it?

Amazing! The food looks so exquisite, rare, and carefully selected and decorated. Now I’ll never look at my bowl of Paleo oatmeal the same ever again…

I really need an eye-opening experience like this! It’s such a shame I can’t find someplace like this in Canada.

Lol – I wish I knew of somewhere in Canada. It’s such an eye-opening experience.

OMG ! this is not food ,, this is art… I can get starved looking at it…

My wife has been dealing with food allergies for years and always gets apprehensive when we go out to eat at a restaurant for the first time. I am experiencing the same thing, but on a much lower scale, now that I am eating primal/paleo. Finding restaurants that cater to individuals dietary needs, especially really nice ones, like the one in your article, can be such a joy.