Epigenetics Warning: Are You Wrecking Your Kids’ Health? 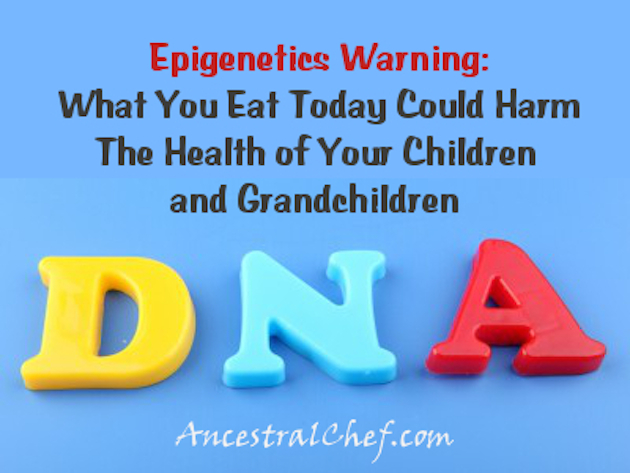 You are what you eat.

You and I have both heard it thousands of times!

But what does it really means? Is it even true?

Turn out that it’s more than just true – it’s a massive understatement.

Your Children and Grandchildren are also what you eat.

That’s right – what you eat for dinner tonight may be affecting your unborn children and their children!

This article will explain how that’s the case and what you should do about it.

Your Genes Are NOT Static!

When you think about your genes, you probably think that they’re bits of DNA that define what color your eyes are, what color your hair is, and how likely you are to get cancer, high blood pressure, or diabetes. That’s how DNA was thought about for a very long time. 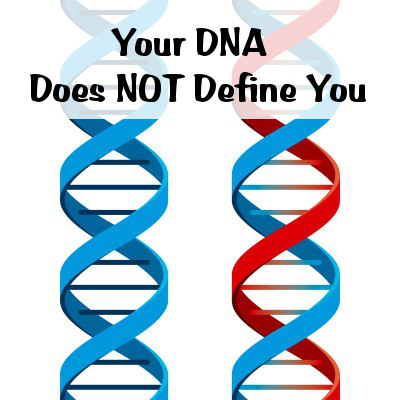 But there’s a bit more to it than that: your environment can completely alter how your DNA is “expressed.” (More on what gene “expression” is below.)

That means that you could actually change how you look and how your body works! I thought this was crazy when I first heard about it – like something out of the TV show, Fringe.

But this actually does not involve GMOs or any crazy experiments…this is simply how genetics (and epigenetics) works.

I’ve heard the term “epigenetics” thrown around for over a year now (it’s a popular topic at a lot of the Paleo/Primal conferences), but I don’t think I truly got it until I read Mark Sisson’s new book, The Primal Connection.

Epigenetics (which literally means “above” or “on top of” genetics) is the study of how a gene can be “expressed” differently without any changes to the actual DNA.

Broadly, this means that a gene might do different things depending on various environmental factors like diet and stress. (As you can see, epigenetics is not just about what you eat, but food is the particular environmental factor that I want to talk about in this article.)

Below is a great video that explains the basics of eipgenetics pretty well. They use a helpful analogy to differentiate DNA from epigenetics: if your DNA sequence is the sequence of words in a paragraph, then epigenetics is the punctuation in that paragraph. That paragraph can take on entirely different meanings depending on where you place the commas, periods, exclamation marks, etc.

What is Gene Expression?

Your genes are like light switches – they can be switched on or off, and when a gene is switched on, then it’s being “expressed.”

In the Primal Connection, Mark provides an overview of the gene that controls how stressed you remain after being in a stressful situation.

So how does this gene actually work? First, this gene has a pretty long name – it’s called the glucocorticoid receptor gene (even scientists shorten it to the “GR” gene, so that’s what I’ll call it). When switched on, this GR gene helps to reduce cortisol levels in your body, which causes you to relax and de-stress.

What is cortisol? When you get into a stressful situation, you produce the hormone cortisol. High levels of cortisol can be good in certain stressful situations (e.g., if you’re being chased by a man-eating wolf), because it makes you stressed so that you’ll go into fight or flight mode. This is a good thing, because calmly walking away is probably going to get you eaten.

However, we are now in the modern world where we’re stressed out for hours every single day. Sitting in traffic. Emails telling you the ten thousands things you have to do today before you’ve even gotten to work. Waiting in lines for just about everything. In fact, there’s barely anything that isn’t stressful!

So what happens when you’re constantly facing stressful situations? Your levels of cortisol stay continuously high, and this can cause serious long term problems, such as obesity and type 2 diabetes.

However, if you have the GR gene switched on, then your cortisol levels will decrease quickly after you encounter a stressful situation. This means you get calmer much faster, which in today’s world will save your sanity and your health!

So how do you get this GR gene to be switched on?

It turns out that if your mother nurtured you a lot while you were a baby, then this GR gene can be switched on for life (see also this article for more information on the studies)! So, if you’re a calm person, then you should thank you mother.

How Can Diet Affect How Your Genes Are Expressed?

Diet plays a hugely important role starting from the diet your mother ate when she was pregnant with you!

Diet during Your Mother’s Pregnancy:

Studies have shown that pregnant mice fed diets deficient in folate (also known as vitamin B9, which is found in liver, sunflower seeds, dark leafy green vegetables) or choline (found in egg yolk, chicken, grass fed beef, cauliflower, collard greens) produced babies that were obese and had yellow (as opposed to the usual brown) fur with a high risk of cancer and diabetes. 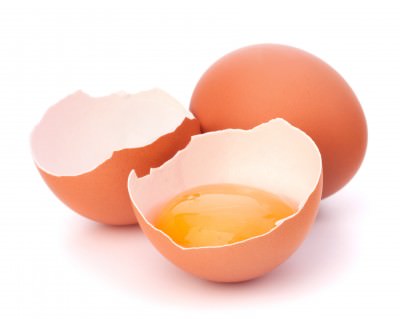 Conversely, when pregnant mice were fed the same diet but supplemented with folate and choline, their offspring were healthy, thin, and had a low risk of disease. And they had brown fur.

[A quick addition here – a variety of studies have shown that supplementing with folic acid or foods fortified with folic acid can actually be more harmful than good.  Instead, you should eat foods with folate and choline in it (egg yolks, liver, green leafy veggies).  Read the Perfect Health Diet Book (chapter 35 on “Choline and Folic Acid”) for more information.]

Did you hear that? They had different color fur!

And in case you think it’s because they have different DNAs, you’re wrong. Both sets of offspring had identical DNA!

Your Father’s Role in Defining You:

And what your father did at age 11 may matter too! A 2006 study found that the sons (and not daughters) of men who started smoking before age 11 had higher BMIs than other boys by the time they reached 9 years of age, which means that they may well be at a higher risk for various diseases like diabetes.

And these changes can last for generations. A study performed on fruit flies exposed to a certain drug produced offspring with certain growths on their eyes that lasted 13 generations. And there were no DNA changes!

What About Darwinian Evolution?

In fact, it makes complete sense that pregnant mice who were fed poor diets would produce obese babies. After all, the reason for her poor diet was probably due to a lack of food in general. So, it’s actually good that her children should be obese so that they retain more fat to help them stay alive without much food.

Similarly, if the mother wasn’t able to spend much time nurturing her babies, then it’s likely that she had to go out and find food constantly or else fight off predators all the time. That probably means those babies were born in a dangerous place, so having higher cortisol levels would be an advantage to help them survive.

Unfortunately for us, our modern world has messed up our innate biological systems. While obesity and high cortisol levels may have been beneficial in the paleolithic world, they are now a dangerous by-product of our modern society.

What Should You Be Eating?

You don’t need a nutrition degree to know the answer to this question – eating foods that are full of nutrients and low in toxins is clearly the way to go and restricting calories is clearly not healthy. Who knows if by starving yourself you might inadvertently curse your child to a life of obesity?

I don’t have kids yet, but I know that many people, like me, wish we could give our kids the best start to life possible. We want them to have the things we didn’t even have. To achieve this, many of us work hard to earn more money so that our children can live a better life, but I think it’s becoming clearer that the best gift we could give our children is to live a healthy life ourselves!

Great Article! Thank you for the information