Home » Blog » Healing and Natural Health Treatments » Scientific Studies » Is There Any Benefit to Getting Genetic Tests for Things Like MTHFR?

Is There Any Benefit to Getting Genetic Tests for Things Like MTHFR? 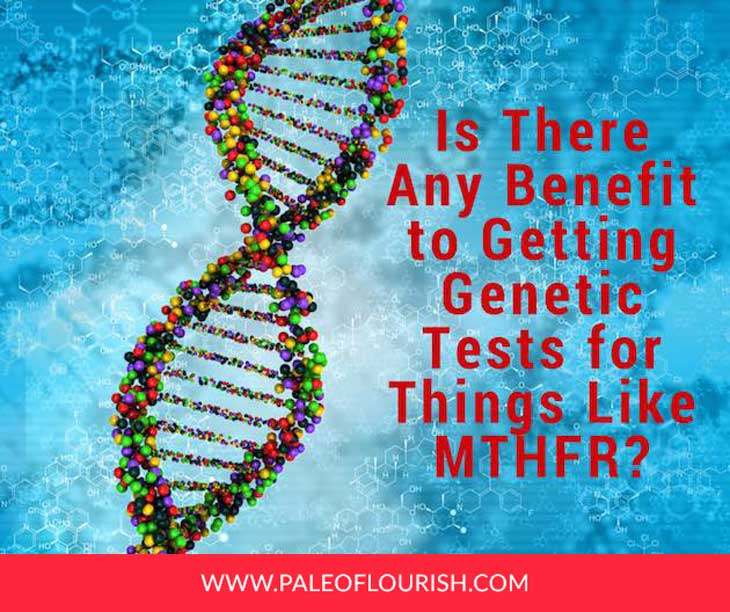 I fully believe that the study of genetics, the research into genetics, and the technological advancements we’re beginning to see are amazing. But testing hasn’t seemed all that useful to me because – in general – it probably won’t change how you should live and eat, no matter what the results are.

The reason I’ve always believed that is because a healthy diet and lifestyle is generally healthy for everybody, regardless of genetics. It might be more important for some people than others, but really, we should all be eating real foods, sleeping enough, de-stressing, etc.

However, I’ve recently come full circle and have begun to realize that some genetic testing is quite useful.

In particular, testing for certain mutations (CBS, COMT, MTHFR, etc.) can actually point us in a direction of diet and supplementation that isn’t necessarily different than a real-food diet, so much as it is a tweak to a real food diet.

In my own case, I have CBS, COMT, and MTHFR mutations. If you don’t know what those are, then the simple explanation is that my body doesn’t detox very well, and it doesn’t methylate very well (generally the process of turning homocysteine into methionine – a central part of the way our bodies work).

This isn’t the end of the world, but knowing about these mutations has allowed me to start supplementing and more adequately healing conditions like Adrenal Fatigue and Hypothyroidism. It still requires that I eat well and sleep well, obviously, but the supplements are beginning to make everything easier.

I don’t think that these tests are 100% necessary or even 100% useful, as the treatments really require a lot of tweaking from person to person. But it is useful, and the benefits of knowing are increasing.