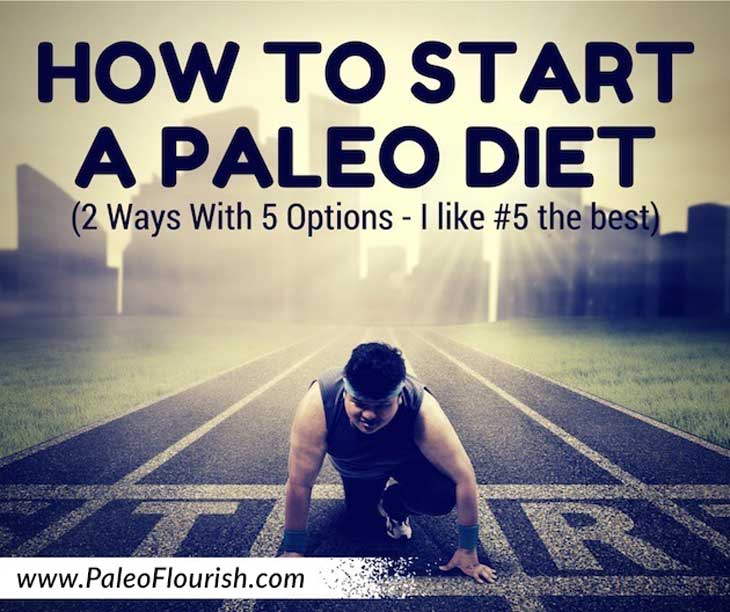 A common question I get from readers is something along these lines:

I really want to start a Paleo diet, but I don’t know how best to start it.

If you’re asking this question, then read on as this article goes into detail about the different ways to start a Paleo diet so you can pick the best method for you.

Why Are There Different Ways Of Starting A Paleo Diet?

From personal experience, and from hearing other people’s experiences, I know that you can start a Paleo diet using completely different methods.

For Jeremy, he likes to set a rule and stick to it 100%, because if it’s not a 100% rule, he’ll break it and fall off the wagon immediately. So, for him, he made the decision one day to do a Paleo diet, and he started that way immediately. He bought himself some bacon, eggs, and veggies, and settled into the Paleo diet by eating pretty much the same food daily.

For me, I thought Jeremy was crazy, and when I first tried a Paleo diet strictly (like Jeremy had done), I fell off within 3 days.

So, when I finally started a Paleo diet, I decided to do it gently. I didn’t throw out everything non-Paleo from my pantry, and I didn’t crazily check the ingredients of everything I bought. I ate at restaurants (with seed oil and vegetable oil), I ate dairy (and drank milk), I ate rice and some legumes (peanut M&M’s from the vending machine), and I even had some non-Paleo desserts at work (shock horror!).

I’ve listed below several different ways of starting a Paleo diet, so read on.

Having Trouble Getting Spouse or Family To Start Paleo?

It often helps a lot to have your family or a friend start the Paleo diet with you – it provides you with support and accountability. It’s really nice having someone who can share and understand your struggles and who can cheer your successes.

For advice on how to get your family or friend on board with a Paleo diet, check out this article.

I’m On The Fence About Paleo – Does Paleo Really Work?

One of the things that held me back from starting a Paleo diet was disbelief. I wanted to believe that Paleo would work, but I couldn’t fully believe it. I had tried various diets before, and they hadn’t worked too well.

If you’re not convinced about the Paleo diet, then you’re not going to be until you start it and get results.

I was a complete skeptic until I tried Paleo for a week and was wowed by just how much energy I got (plus my heartburn disappeared, bloating went down, and I lost weight!). And other people report other amazing changes that I could write pages and pages about, but you will still think, “I’m different so it won’t work for me.”

So, Just Try This:

And see how you feel.

Your Mental State Before You Start A Paleo Diet

For many people (and I was one of them), your mental state when you first start a Paleo diet is something like this:

There’s so much anger and resentment – it’s like you’re being forced to do this horrific thing for someone else’s benefit.

I only recently realized that that was my reaction to many things in life still. Even now, when I go to the gym, I don’t jump up and down in delight (who does, right??). Instead, I tell myself that “I have to go,” and I walk into the gym with a slump (and no smile), and I try to get out as quickly as possible.

That’s the same with starting a Paleo diet – this is going to improve your life, it’s going to bring you more energy, help you lose weight, and make you healthier overall.

So, just take a moment to change your mental attitude before you start a Paleo diet.

No one is making you give up any foods – you are choosing to do it because you want a better life.

[Tweet “No one is making you give up any foods – you are choosing to do it because you want a better life.”]

VIDEO ON HOW TO START A PALEO DIET

I made this post into a video as well in case you prefer that:

HOW TO START A PALEO DIET

This is the method that Jeremy likes.

Personality type method 1 is good for: you like rules, you like life to be very orderly, and you’re good at and enjoy following a strict schedule or set of rules.

There are several options within method 1, so pick the one that suits you.

OPTION 1: If You Can And Have Time To Cook.
1. Clean out your pantry (throw out or give away all non-Paleo foods).
2. Print out our Paleo diet food list (get the full list here).
3. Meal plan your daily meals – I suggest repeating the same foods over and over if you are ok with that. This just makes it so much easier to stick to the diet initially. Get our free 4 week Paleo meal plan for ideas and check out my 3-step plan for meal planning super easily.
4. Stock up on Paleo Pantry essentials (get the full list here).
5. Try to not eat out at all.

OPTION 2: If You Don’t Cook Or Don’t Have Time To Cook.
1. Sign up for a Paleo meal delivery service. If you’re in the New York area, then I highly recommend Kettlebell Kitchen (here’s our review of them). Paleo meal delivery services that deliver across the US include Pete’s Paleo and Paleo On The Go.
2. Read our guide to eating out Paleo and make sure you stick to it at restaurants.
3. Get some healthy Paleo snacks (check out our lists of snacks here).

Personality type method 2 is good for: you dislike it when people tell you want to do, you’ve tried setting rules and sticking to a schedule but it just never works beyond the first few days.

Again, there are several options within method 2, so pick the one that suits you.

OPTION 3: Commit To One Meal Per Day Initially.
1. I suggest committing to having a very low-sugar Paleo breakfast daily to start with. I find this makes a huge difference to my way of thinking, my energy levels, as well as how hungry I am throughout the day.
2. After a few weeks of eating Paleo breakfasts daily, add in Paleo dinners, and then a few weeks later, add in Paleo lunches, and then Paleo snacks.

OPTION 4: Replace Your Foods.
1. Think of the main dishes you eat e.g. cereal, toast, pasta, cookies, and start replacing each with the Paleo version of them. E.g., instead of regular bread, make Paleo bread.
2. After a while, add in non-replacement foods like just vegetables and meat for a meal.
3. After a few months, start phasing out the replacement foods.

OPTION 5: Relax Into It And Record How You Feel.
1. Remember that you’re doing a Paleo diet because you want to live a healthier life (no one is forcing you!).
2. When making food choices, stick to fish, vegetables, meats, and fruits as much as possible.
3. Cook more and eat out less.
4. Keep a food dairy and record what you ate and how you felt a few hours after eating each meal. Over time you’ll make correlations between what foods make you feel worse and you’ll naturally want to avoid those foods.

Don’t Forget These Are Also Part Of the Paleo Diet

You probably already know this, but I just want to make sure it doesn’t get forgotten!

Sleep, de-stressing, and some exercising are all part of a Paleo diet too! It’s not just about food.

[Tweet “Sleep, de-stressing, and some exercising are all part of a Paleo diet too! It’s not just about food.”]

Personally, I’ve found getting sufficient sleep and de-stressing to really affect how I feel daily. In fact, I feel worse from not sleeping enough than from eating a slice of bread!

If you cheat on the Paleo diet, eat something you shouldn’t have, give in to an impulse to eat cupcakes, just remember it’s ok. Forgive yourself!

And if you want to just give Paleo a quick try, then I highly suggest joining our Free 7-Day Pure Paleo Challenge (you’ll get a quick-start guide, daily videos emailed to you for motivation and support, private Facebook group, plus prizes for completing the challenge). Just click here to join.