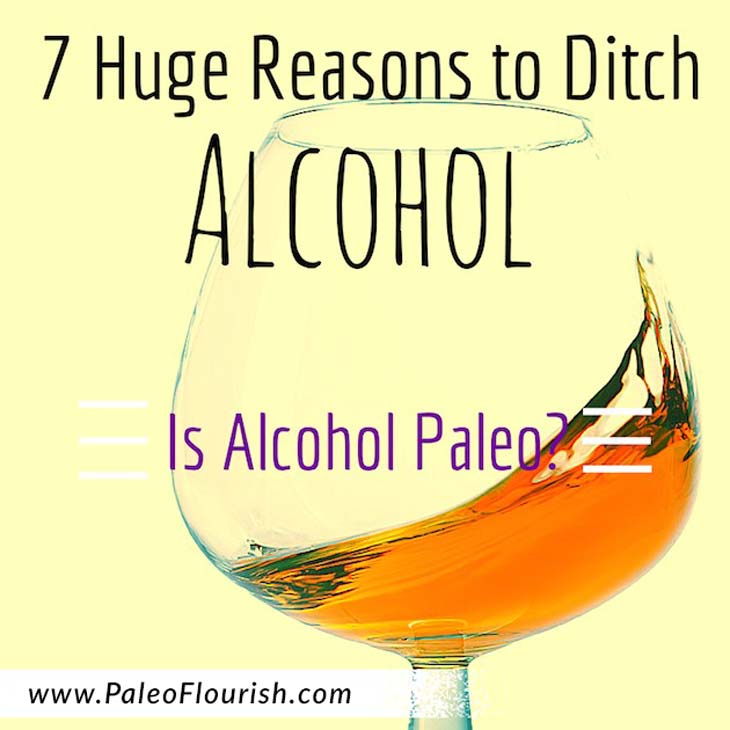 I’m on a mission to become the most unpopular person in the history of the world. And I’m going to do it by telling you something that you already know.

Alcohol is not healthy and not Paleo.

I can feel the hatred already…

7 Reasons Alcohol is Not Nearly as Healthy as You Think

You really want alcohol to be healthy. I do too. Alcohol is fun and relaxing. It’s a social lubricant and all that jazz.

And you can feel free to call me a hypocrite, because I still drink alcohol, albeit much less often than I used to.

But be honest with yourself. When you try to justify that glass of red wine, do it for the real reasons (being social, relaxing, enjoying life, etc.) and not the ones you just wish were true (health/nutrition).

Without further ado, here are 7 reasons that you should avoid alcohol if you really want to be healthy:

1. Alcohol Leads to Terrible Decision-Making. This is the single best reason to avoid drinking, and yet it’s the most under-estimated.

Scientists aren’t yet sure of all the ways that alcohol affects your brain (here is one technical explanation), but at its most basic level, alcohol consumption reduces glucose utilization in your prefrontal cortex (as well as other areas of the brain), which means that you aren’t able to use that part of your brain as effectively. That’s unfortunate, because your prefrontal cortex is responsible for executive decision-making – in other words, keeping you from cheating on your diet and having 4 pieces of pizza at 2am.

Once you’ve had even one drink, you’re much more likely to make a bad decision, and passive overeating is often a direct result. And if you’re thinking of drinking regularly, remember that long-term alcohol consumption has been shown to be more detrimental than cocaine when it comes to decision making.

(As an aside, it’s actually just myth that alcohol kills brain cells.)

2. Alcohol Does Not Extend Your Life. Every time a study gets published that shows any potential benefit of alcohol, the media and every health blogger jumps all over it, as if they’ve been waiting their whole lives for someone to prove to them that drinking is nutritionally sound.

And there are a lot of studies on alcohol. Quite a few, in fact, claim to show that alcohol decreased the chance of heart disease and extends your life-span.

The problem is that none of the studies I’ve read ever do anything more than establish correlations. In other words, groups of people who drink on a regular basis (without really abusing alcohol) tend to be a little bit healthier.

Unfortunately, it’s quite possible – and even likely – that the cause is something else entirely. As Jonah Lehrer has pointed out, the explanation for the drinkers living longer is likely attributable to their more active social lives.  After all, loneliness and social isolation is a vastly under-appreciated health risk.  In other words, regular drinking is usually associated with being part of an active social group, which is a major benefit to your overall health.

3. Alcohol is Terrible for Sleep. If you’ve had enough to drink, you probably feel like doing nothing more than passing out. I’ve certainly been there many times. It’s also the reason that many people who have insomnia turn to drinking at night.

However, researchers have consistently found that alcohol tends to disrupt sleep during the night. What this means is that you will likely fall asleep faster and get a bit more deep sleep, but during the second half of the night, your sleep cycle will be disrupted. This leads to less overall sleep and also means less restful sleep, often resulting in impaired concentration and memory the next day.

And not getting sufficient good sleep is a major whammy for your health. It messes with your hormones (like insulin), making it harder for you to lose weight and stay healthy. In addition, lack of sleep makes it much more likely that you’ll make bad food choices the next day.

4. Alcohol is a Toxin. If it walks and talks like a duck…

Like most other toxins, alcohol heads pretty much straight to your liver. In fact, even before alcohol gets to your liver, it’s attacked by enzymes in your body known as alcohol dehydrogenase, which try to detoxify alcohol.

As with any toxin, the harm is proportionate to the dose. However, anytime that you force your body to deal with alcohol, it’s going to increase overall inflammation and consume resources and micronutrients that your body could otherwise use for repairing and rebuilding your body.

Your liver is one of the most remarkable organs in your body and is amazingly good at ridding your body of toxins. Even so, it’s not capable of doing everything all at once. Alcohol is a big enough toxin that while it’s present in your body, your liver is going to focus almost all of its resources on getting rid of the alcohol, despite the fact that other toxins might be present and damaging your body at the same time.

5. Alcohol = No Fat Loss. Your liver is one of the organs primarily responsible for helping you to burn body fat. It’s not that your liver itself burns the fat, but it plays a major role in indicating to the rest of your body that you can and should burn bodyfat.

Unfortunately – for a variety of reasons – neither your liver nor your body will engage in much fat-burning while they’re having to deal with alcohol. And that’s in addition to all the extra energy that you’re storing as fat from the alcohol you consumed.

6. Leaky Gut. If you’re not already familiar with Leaky Gut, please take a read through Jordan’s article on the topic. In brief, leaky gut is a significant contributor to everything from arthritis to acne to most auto-immune diseases. Even at its most benign, leaky gut leads to inflammation that makes it more likely you’ll get sick and . Obviously, the amount you drink matters, but no amount of leaky gut is good, particularly if you already have digestive issues. One of the main problems in the case of alcohol is that alcohol increases the amount of bad bacteria (gram-negative) in your gut and can lead directly to endotoxins being absorbed into your bloodstream.

Sarah Ballantyne, who’s got an interview in this issue, wrote an excellent article here on the issues with alcohol and leaky gut.

7. It’s Not Paleo. But wait…hasn’t alcohol been around forever? Surely surely grapes and other fruits fermented naturally.

This is all true. It’s likely that humans have had some very small access to alcohol for a very long time, although that access was rare at best until at least the advent of agriculture. And it’s likely that if you have 2 glasses of alcohol per year with an otherwise amazing diet, then you probably won’t see many side effects.

Still, Paleo is about a lot more than just what existed a million years ago. The most important issue is how it will affect your body and your ability to reach your health goals (whether losing weight, getting more fit, or anything else). And I think you know the answer to that question.

If You Do Drink

At the end of the day, you’ll probably still drink sometimes. I do, although much less frequently than I used to.

With that in mind, here are a few obvious tips, whether you’re sticking to your Paleo diet or not:

1. Skip the Beer. Although fermentation removes most of the toxins from the grains that the beer is made from, it doesn’t remove all. There’s definitely still some gluten and wheat-germ agglutinin in your beer.

For more tips, check out my article on Drinking Alcohol Without Ruining Your Paleo Diet

So Should You Drink Alcohol?

This is kind of like asking whether you surf the internet. In general, it probably does very little for you, but you’re going to do it anyway, and you’re doing it for reasons other than that it’s good for you.

In the end, alcohol consumption comes down to a lot more than just health.

There are many times in our lives when it’s a bit of a social faux pas to not drink. If that’s the case for you, then it’s probably not worth the stress to pass up a drink or 2 on occasion.

Still, don’t justify your drinks by thinking that it’s the healthy or Paleo thing to do. Just relax when you need to, remind yourself that it’s a deviation from your normal, healthy diet, and that it’s all part of living and enjoying life. Also, when you do grab a drink, I recommend following Mark Sisson’s recommendations here, which lay out the best and worst alcohols to consume.