Is Crab Healthy for Me? Plus, How to Properly Cook Crab 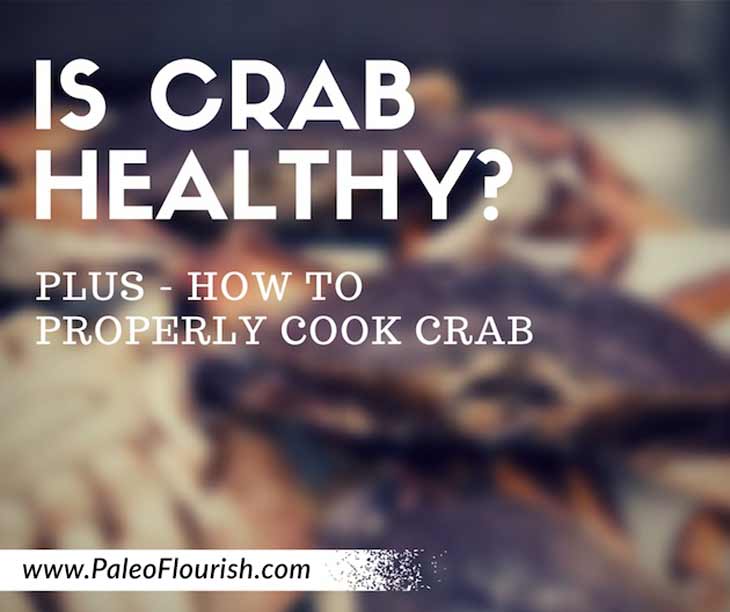 Upright ancestors of humans evolved from monkeys just 4-6 million years ago. And we weren’t REALLY human until about 130,000 years ago (at least by some metrics like brain size). But however long it’s been, it’s nowhere close to 200 million years.

Crabs, though, have been crabs for about that long. They were around with dinosaurs, for crying out loud.

I’m a geek for facts like this, but the one that might blow you away is that the largest crabs can measure 12 feet across (from claw to claw). That’s not a crab that would fit in any pot that I have at home.

Why Crabs Are Super Healthy

Crabs are a little bit expensive in the United States (and in most parts of the world). So when we think of crab, we usually think of a delicacy rather than a health food.

And to be sure, crabs are delicious, especially if they’re very fresh.

But they’re also incredibly nutrient-dense, like most other shellfish.

Crabs are very high in Zinc, Copper, Selenium, and B12, all critical minerals and vitamins that we don’t get a whole lot of from other foods. In addition, it’s got very respectable levels of most other vitamins and minerals, making it nutritious across the board.

I don’t list any numbers here because it varies a little depending on the type of crab (King Crab, Dungeness Crab, etc.), but pretty much every crab is excellent.

And if you’re worried about mercury (which you generally shouldn’t be, unless you’re eating shark or whale), then rest assured that crab is near the bottom of the food chain, feeding mostly on algae, which means that it’s very low in mercury generally.

What You Need to Watch Out For

Crabs are a shellfish, which means that they’re pretty allergenic, and a lot of people have sensitivities to shellfish.

So you need to pay attention to how you feel when you eat crab. If it’s not so great, then that’s probably a pretty good sign that you have a sensitivity and should steer clear.

Also, if you’re going to buy and eat crab, you want to make sure it’s as fresh as possible, preferably alive and just caught from the sea. This doesn’t mean you can never eat frozen crab, but not only will the taste not be nearly as good, but also – like all seafood – as soon as it dies, histamines start getting released into the meat, which makes it more likely you’ll have an allergenic response to the crab.

If you’re not familiar with preparing and cooking live crabs, then here’s an excellent tutorial, which focuses on Dungeness crabs, but could apply to any hard-shell crab: https://paleoflourish.com/how-to-cook-dungeness-crab

And when it comes to buying live crab from the store, definitely visit a store that seems to go through a lot of crab on a daily basis. If the crabs have been there more than a day or so, then they’re probably not fed well and are starting to get malnourished.