I always thought gelatin was some bad substance since I only knew it from pre-packaged jello. I therefore attributed it to some artificial oddity. But, it’s actually completely derived from animal products!

In fact, gelatin is typically made from items such as beef or pig skin and bones, which all contain high levels of collagen.

Gelatin is, however, often found in jello products along with artificial colorings and fake flavors, and those should definitely be avoided on any kind of diet!

So, is gelatin Paleo? 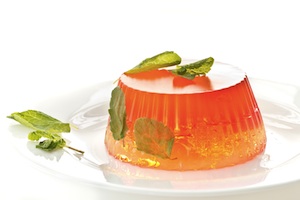 From an evolutionary perspective: I’m not too big on guessing what cavemen might have ate, but if we were to hypothesize, then it’s pretty dang likely that they ate the skin from animals! So, yes it’s Paleo.

From a modern science perspective: Gelatin is actually mostly protein (by weight) and is high in glycine and proline but not particularly high in other amino acids (hence it’s not a great source of protein).

What’s really great about gelatin though is that it can help with gut absorption of various nutrients, and it potentially helps stiffness and pain in joints. Mark Sisson also cites that glycine (which gelatin has a lot of) can help improve your sleep quality. So again, yes it’s Paleo.

How do you eat Gelatin?

There’s 2 main ways to get gelatin in your diet:
1) If you drink bone broth, then you’ll already be drinking plenty of gelatin. It’s the reason bone broth looks rather like jello when it’s cooled down.

2) You can also buy gelatin as a creamy-colored powder. It can be added to various foods (like soups or even smoothies). Sarah Ballantyne uses gelatin as an egg substitute in custards, cakes and muffins. Below you’ll find a few of our favorite recipes with gelatin.