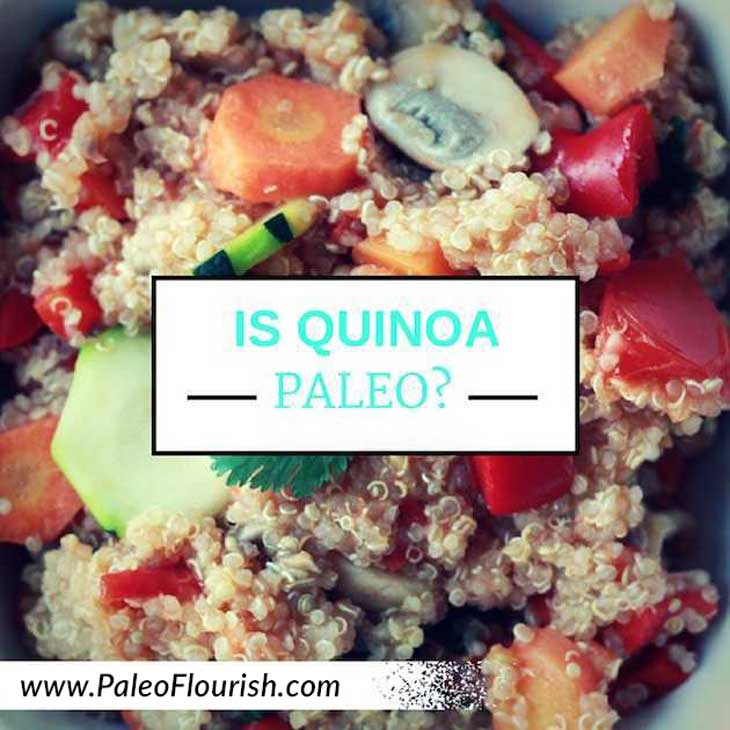 I get asked about quinoa a lot – as many people have pointed out, it’s not a grain. So does that make quinoa Paleo?

Read on to find out.

To answer the question of whether quinoa is Paleo or not, we first need to examine exactly what quinoa is.

The quinoa we eat is a seed from the goosefoot plant, and it resembles fluffy couscous or rice even though it’s not a grain. Quinoa is often called a pseudocereal as it’s not a member of the true grass family. Instead, quinoa is more closely related to beetroots, spinach, and tumbleweeds.

You’re probably thinking that this must make quinoa pretty Paleo, but you might be shocked to find otherwise.

So, Is Quinoa Paleo?

The main problems with quinoa are:
1. Its high saponin content. The saponins in quinoa are mostly found in the outer covering of quinoa and can cause gut irritation when consumed. Polishing of quinoa can reduce the saponin content (as well as remove the bitter taste), so if you’re looking to eat quinoa, try to find quinoa that is polished (or more processed). This study suggests that washing the quinoa may remove more of the saponins as well as the other anti-nutrients in quinoa.

4. Not sufficient nutrients.
And sadly, quinoa just doesn’t have enough nutritious benefits to counterbalance those three above problems. While quinoa is often touted as high in protein, the fact is 100g of cooked quinoa contains only 4g of protein compared with 26g in ground beef. And many of the vitamins and minerals that quinoa does contain may not be available to us due to the anti-nutrients.

What Do Paleo Experts Say – Is Quinoa Paleo?

Loren Cordain says: “[Quinoa seeds] contain a variety of anti-nutrient compounds which potentially have deleterious effects in humans, particularly if they are consumed in high amounts on a regular basis. Quinoa seeds may contain very high concentrations (up to 5,000 mg/kg) of compounds known as saponins, which like the name implies, have soap like properties they may cause a “leaky” gut by breaking down intestinal cell membranes.”

Robb Wolf says: “Quinoa is botanically not a grain, but because it has evolved in a similar biological niche, quinoa has similar properties to grains, including chemical defense systems that irritate the gut. In the case of Quinoa, it contains soap-like molecules called saponins. Unlike gluten, which attaches to a carrier molecule in the intestines, saponins simply punch holes in the membranes of the microvilli cells. Yes, that’s bad.”

So, bottom line is that quinoa isn’t horrific (it’a also gluten-free), but there are way more nutritious and less toxic foods out there to eat than quinoa!