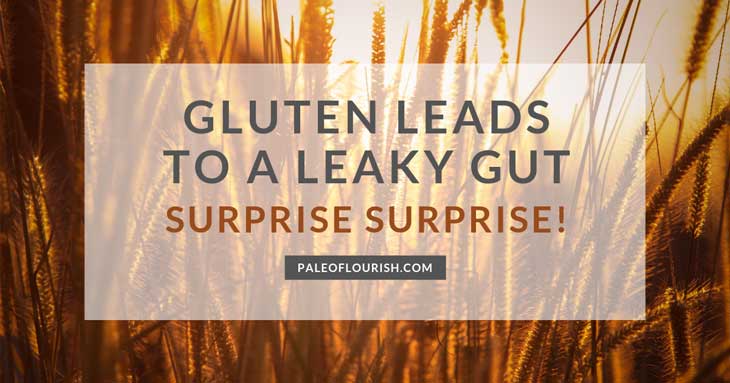 Occasionally, I cheat on my Paleo diet (shocking, huh?).

However, even when I cheat, I never eat gluten, and I’m probably the least-sensitive person I know.

Even though I don’t experience any acute symptoms from eating gluten, I still avoid it at all costs.

Recently, there was a study published with the following title:

A Controlled Trial of Gluten-Free Diet in Patients With Irritable Bowel Syndrome-Diarrhea: Effects on Bowel Frequency and Intestinal Function

The study took a bunch of people and divided them into 2 groups.  One group ate gluten, and one group didn’t.

Along the way, the researchers measured how leaky the participants’ intestines were (in other words, how much stuff was getting through that shouldn’t have).

It should come as no shock to you, but the group that was eating gluten had significantly more leaky gut.  In other words, a lot more things were getting through into their bloodstream that their intestines should have been keeping out.  All of the participants already had some digestive issues, but not all of the participants were allergic or even “sensitive” to gluten.

And, as a secondary conclusion, don’t eat gluten.

The dose always makes the poison, so eating gluten once or twice a year probably won’t have a major effect on most people, but is it really worth the risk?  After all, it can take up to 6 months for some bodies to recover from gluten exposure.

Leaky gut has only started to be recognized as a serious condition in the past 5-10 years, but it’s potentially at the root of many major health issue.

On the plus side, it’s largely reversible, so if you stop eating things like gluten that cause leaky gut, then you will probably get better.

On the downside, toxins like gluten cause leaky gut to some degree or another for all humans.

If you follow many Paleo blogs at all, then it probably seems like there is an unhealthy obsession with bone broth.

Whenever someone is feeling sick…bone broth.

The Huge Benefits of Bone Broth

If you don’t know, bone broth is simply what it sounds like.  It’s broth that’s made by slow-cooking water with bones (and often some veggies, apple-cider vinegar, etc.).

When cooled, it usually thickens into a substance that looks like Jello.

There are no “magic” Paleo foods, but here’s why bone broth is so great:

1. It’s really high in Glycine and Proline.  Glycine and Proline are amino acids that are more things in our bodies that I could name here.  A few functions include (a) being the primary building blocks of cartilage, (b) being critical in the repair of cell damage, and (c) being necessary for synthesis of DNA and RNA.  If you want to know more, read The Paleo Mom’s excellent article.

2. Bone Broth is Great for Digestive and Mental Health.  If you have digestive issues, there is no food that will help to heal your gut more than bone broth.  If you’re really interested and haven’t read it already, I highly recommend the book Gut and Psychology Syndrome.

3. Bone Broth is Delicious and Versatile and Cheap.  You can usually buy bones for $1 or so per pound, depending on where you live, and you can make several huge batches of broth from 3-4 pounds of bones.  In addition, you can use the broth as a base for any stew or soup that you make.

Again, there’s no magic to any food, but bone broth is one of the most healthy foods that you can eat from a nutrient-density perspective.

Where To Buy Bones?

Your local butcher is the best bet, but if you’re having trouble, then check out US Wellness Meats in the US (we often get bones delivered to our door from them).

What About Gelatin Powder?

If you can’t make bone broth, then buy some this brand of gelatin from Amazon.

Want To Know More About The Benefits of Gelatin?

If you want to find out more about gelatin and its benefits, then check out this great book, The Gelatin Secret here.