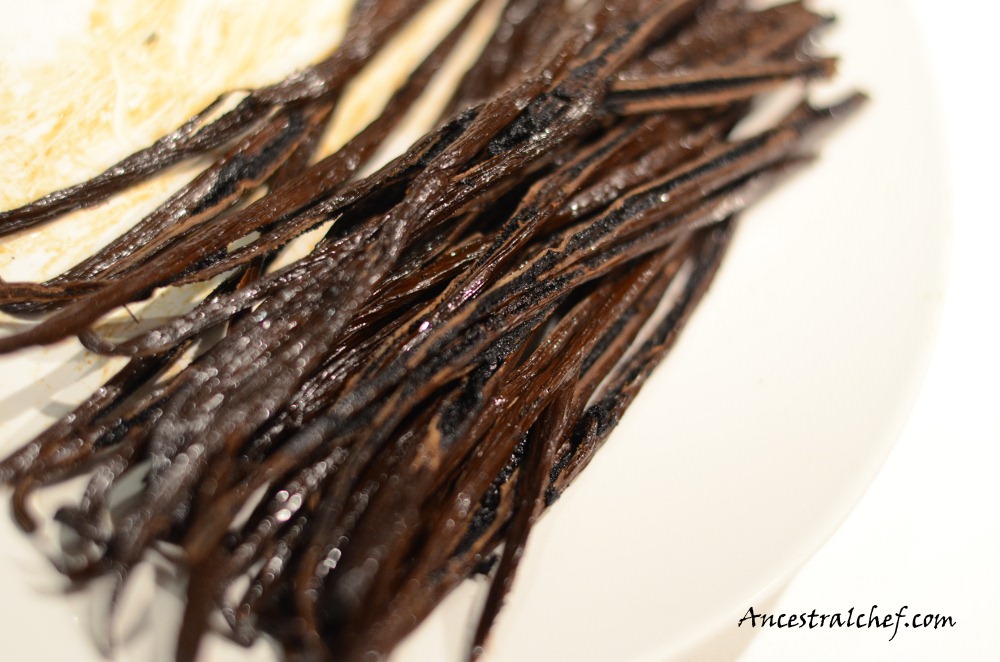 I know this might look like a muddy bottle of cheap vodka to you, but it is in actual fact a delicious and highly prized (by me) bottle of my own vanilla extract.  Fresh Madagascar vanilla beans with vodka (yes, it’s cheap vodka!).  No sugar.  No coloring.

It smells delicious, and I’ve made enough to last me quite a long long time! It’s also amazing how much cheaper it is to make your own. I initially balked at having to pay $28 for my vanilla beans (around 50 beans), but they were well worth it. And my vodka was only around $10. So for approximately $30 (because I only use around 30 beans), I can make 1 liter (or 33oz) of completely pure vanilla extract.  The brand of pure vanilla extract I used to buy (Simply Organic) is $16 for 8oz on Amazon.  So basically, it’s Double The Price to buy rather than make your own vanilla extract!

The method is simple, and this is how it works:

Of course, you start with a bottle of vodka.  If you want to make a smaller amount, you can clean out a small glass bottle with an airtight cap and fill 2/3rds of it with vodka.  You can also use rum or other spirits, but vodka is supposed to be the most “unflavored” of alcohols, which is why I went with it.  There’s also a debate as to whether one brand of vodka can actually taste “better” than another since they are supposed to be tasteless, so I went with the cheap brand. 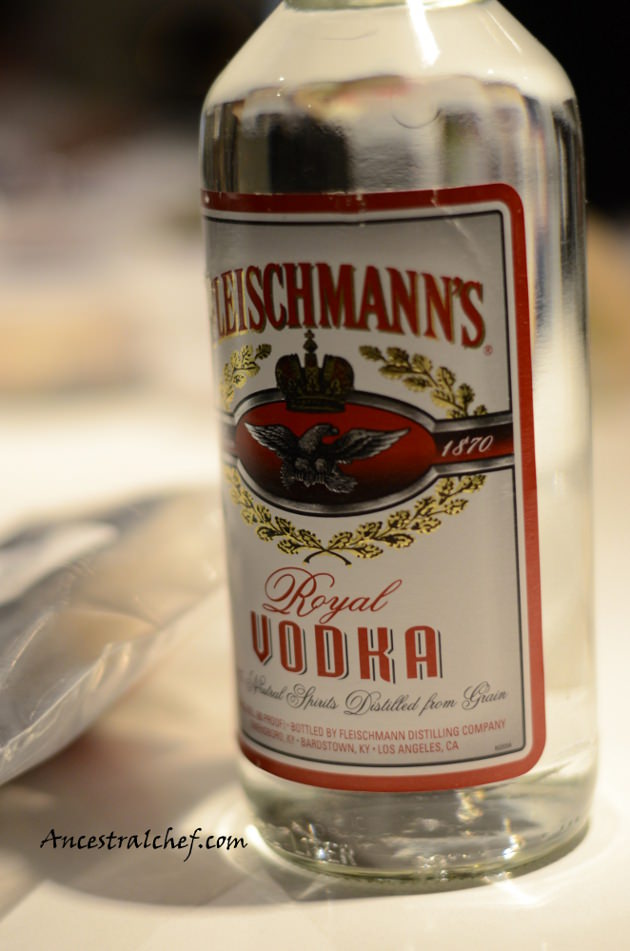 Next, get some really good fresh vanilla beans.  I went with these Madagascar Bourbon Vanilla Beans (which I bought from Amazon). 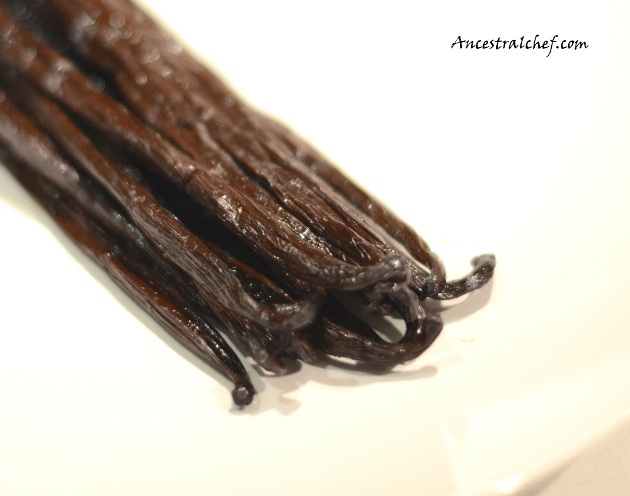 Slice each bean in half lengthwise with a sharp knife (so much easier with a sharp knife!) so that the “caviar” is exposed.  See those black bits inside the beans – that’s the non-fishy version of “caviar.”  At this point, your entire kitchen will be smelling like it’s edible! 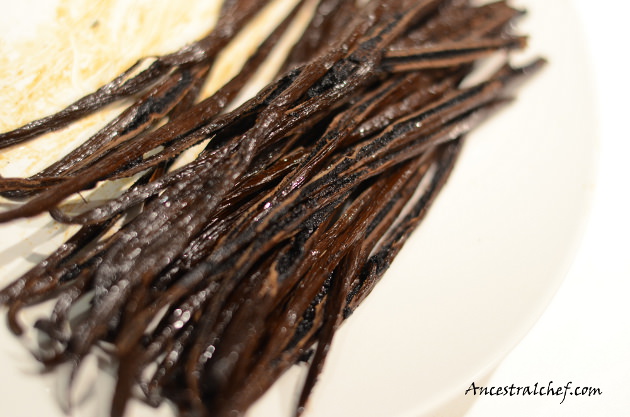 Then chop up the beans into 2 inch long pieces.  The whole point in chopping them up is to increase the surface area that’s exposed to the vodka.  This makes the extract so much stronger in vanilla taste and better. 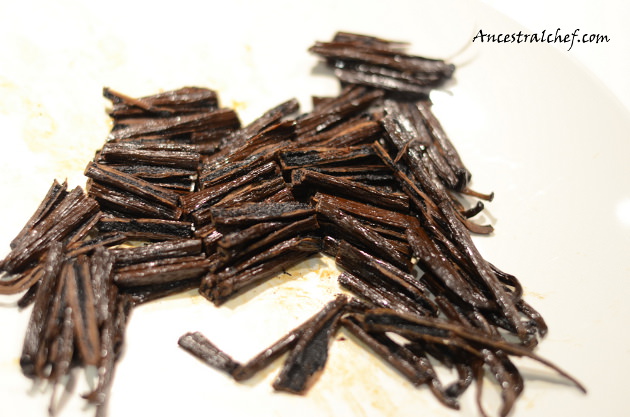 Simply place all of the pieces of vanilla into your bottle of vodka (or your alcohol of choice). 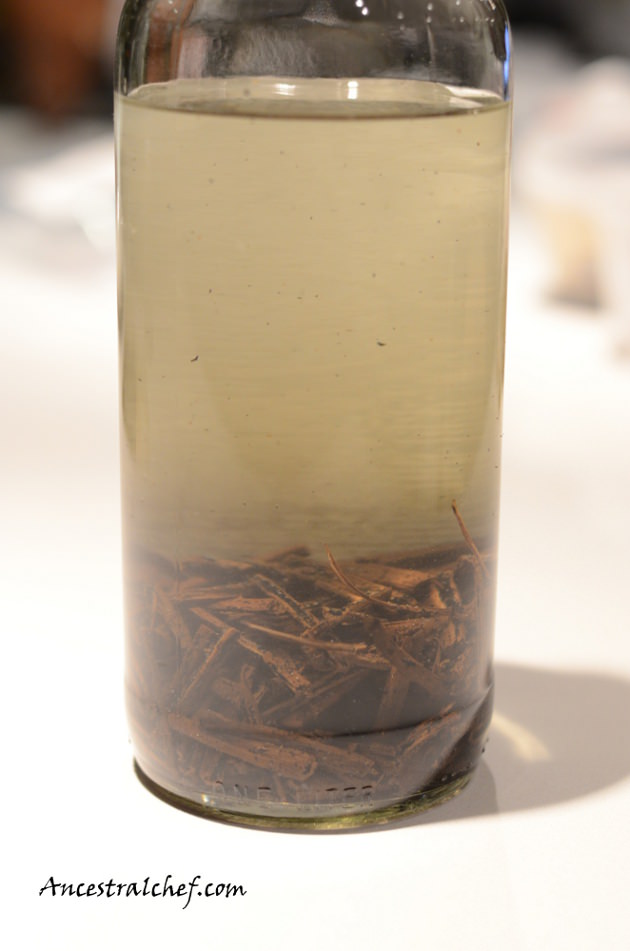 Sit it in a dark cupboard for 2 months (or up to 3 months) – shake up the bottle every few weeks (and taste test it!).  Then start enjoying!  It’s best not to leave the beans in there much longer than 4-5 months as they can start deteriorating.  Simply pour the liquid through a sieve into another container.  It’ll last for quite a while.  In fact, I’m having to desperately think up recipes for it to be used in.  I tried mixing it with some coconut kefir the other day with quite delicious results – see photo below showing it before I swirled the mixture.

Let me know in the comments if you have some good recipes that use vanilla extract! 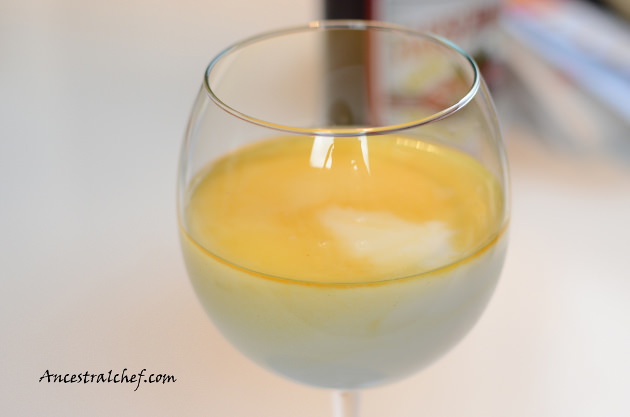 This is really interesting! But I have a question. Since its used with vodka, what’s the alcohol content of this when its done? Is the vanilla you buy in the store made with alcohol too? I’m just curious because I would want to use the vanilla for children recipes and am not sure about the alcohol. I have never cooked with alcohol though and know some properties change as its cooked. Thanks in advance!

I believe most store bought vanilla extract contains alcohol too (at least the ones I’ve tried before). Also, in most recipes, much of the alcohol is evaporated off because the dish is heated (e.g., in baked cookies and muffins). If you’re looking to avoid alcohol completely, then I think there are a few pure vanilla extracts that don’t contain alcohol (but you’ll have to read the ingredients label carefully).

Almost too simple to be true and I can imagine my kitchen smelling nearly edible. For my own uses I would simply switch to a Cîroc vodka.

This looks wonderful. I’ve been making my own extract for years, except I prefer to use bourbon instead of vodka. All Vanilla that you purchase in stores has an alcohol content of 35% (noted on the bottles or boxes). You need not worry with children with any of it. A teaspoon or even a tablespoon, dispersed in a cake recipe, then shared amongst many people will have no ill effect at all. You will only notice a delicious flavor. Impossible to get drunk on so little 😉

Hey girl,
Does this store infinitely or does it go “off” at a certain point? Looks interesting. The price of vanilla has gone up at Costco too… the good madagascar vanilla I buy. Thanks!

I had it for almost a year and it was still good!