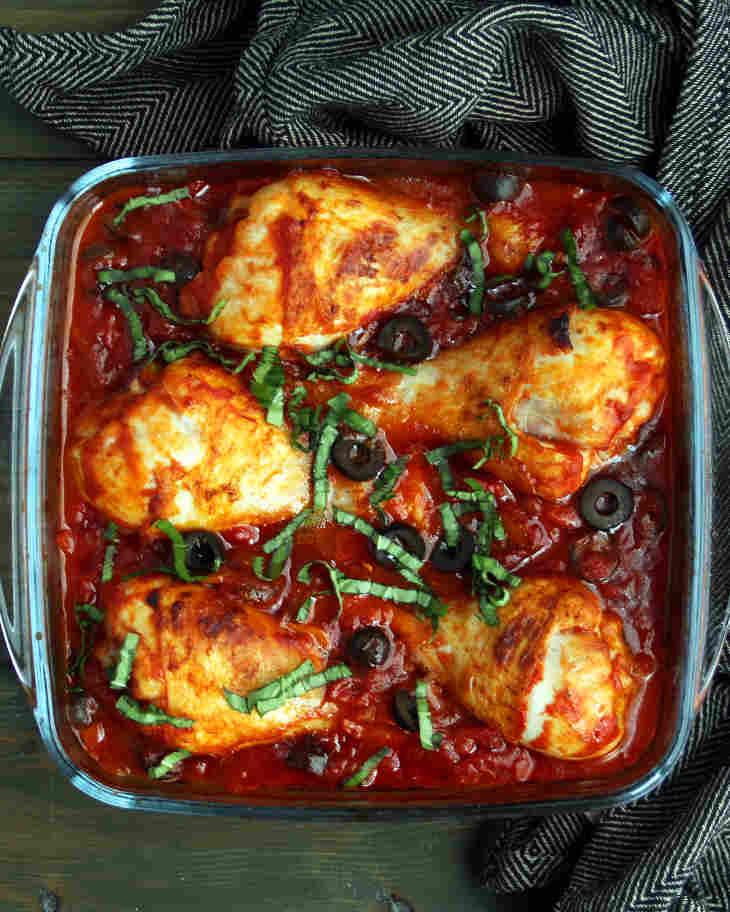 If you enjoy tomatoes and chicken, this is the dish for you. Whip up this Paleo baked chicken puttanesca recipe any night of the week!

Puttanesca is quite the name, and it has an interesting origin story. It roughly translates into “lady of the night,” and there are some theories behind that.

One version claims that the flavorful sauce was designed as a fast meal that could be quickly prepared in between clients.

Another version says the sauce was made to be pungent to lure in customers with the aroma.

Still another theory is that it was so named because it’s like throwing everything in the pot without discretion.

Whatever story you want to go with, the sauce retained its salty flavor and easy prep through the years. Fortunately, it spread far beyond Italy and graces us with its presence in America.

Tomatoes are the base here in this spaghetti-like sauce. It might also include olives, olive oil, anchovies, onions, capers, and garlic.

So no, this is not a low-sodium meal!

Often it is served on top of pasta such as spaghetti.

How I Made Paleo Puttanesca

The first substitution I made was to cut out the noodles. If you would prefer this sauce over “pasta,” however, you can do that using Paleo-safe noodles.

Paleo noodle options include zucchini noodles (use a spiralizer or get them pre-spiralized), butternut or spaghetti squash noodles, or shiratake noodles to name a few.

Personally, I love this sauce over chicken so I left out the pasta component and just created a lovely and unique chicken dish.

With the noodle bit sorted, this is actually a pretty Paleo-safe dish. Onion and garlic amplify your flavor, black olives make it taste authentic, and olive oil is a solid choice and big improvement over vegetable oil.

Keep Calm and Paleo On

I know it’s hard sometimes. It seems like the world is out to throw every non-Paleo creation in existence in your face.

But you can do it.

Stay true to your goals. You started Paleo for a reason, and you will continue to see benefits all the time.

Maybe you wanted to lose some weight, or shake troublesome health symptoms. Whatever your reason, it never hurts to check back in every once and awhile and remember why you’re doing it.

Doing a quick refresher read of the comprehensive guide to the Paleo lifestyle is another smart strategy.