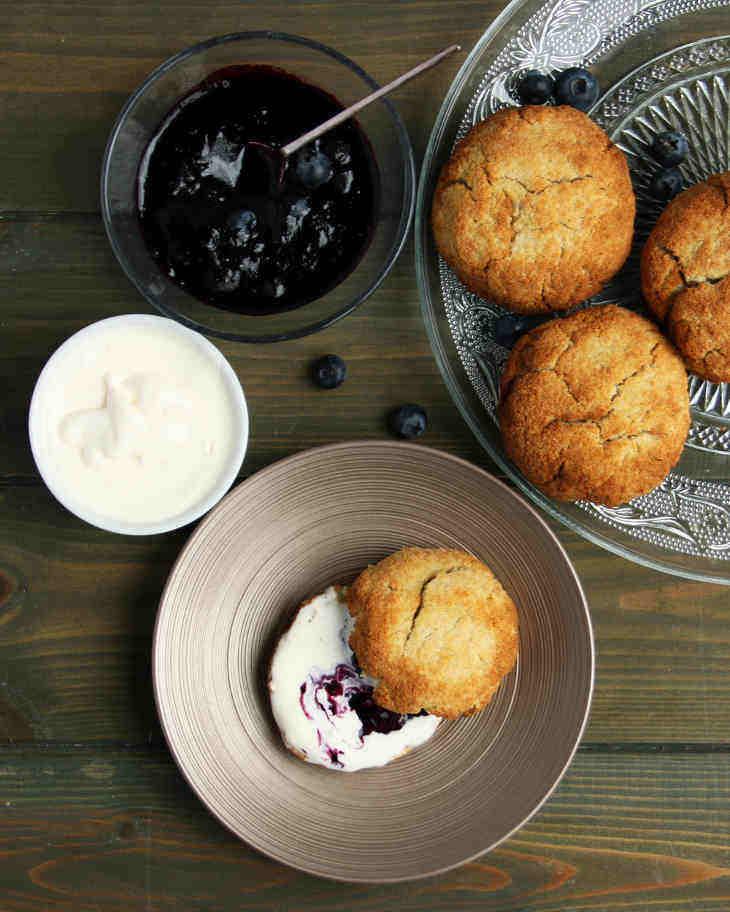 When sitting down with a nice cup of coffee or tea, a tender scone is the perfect accompaniment, not too sweet, not too savory, just right! But what if you are Paleo? Does that mean you have to give up scones forever? Of course not! You just need to find a new recipe, like our Paleo British scones, which use a combination of coconut and almond flours in place of all purpose flour.  A little vanilla and erythritol for sweetness is all the flavoring that these simple yet satisfying scones need!

Who Invented the Scone?

Scones were invented in Britain, Scotland to be specific, where they remain popular to this day. The first scones were not cooked individually. Instead they were cooked as one big round and cut into triangles like a pie for serving. These early scones were dense and flat, cooked over a griddle.

The modern British scone didn’t come into being until baking powder became readily available in the 1800’s. Scones were popularized in Britain partly by the Duchess of Bedford, who started the tradition of eating scones at tea time.

What Is the Difference Between American Scones and British Scones

When you order a scone in New York, you will receive a very different product than if you had asked for a scone in London. That is because American scones and British scones are quite different.

American scones are typically shaped like a triangle. They have a crumbly texture and a buttery taste. They almost always have add-ins such as berries or chocolate chips, and may have icing or sugar on top as well.

British scones resemble American biscuits in appearance. They typically less sweet than their American counterparts. They also have less butter in the scones themselves, though it is common to spread scones with butter to eat them. They rarely have add-ins, other than raisins or currants, and even those are skipped by scone purists. Unlike American scones which are generally eaten as is, British scones are eaten with toppings, like butter, clotted cream, and jam.

Ditch the grains and refined sugar, but keep the baked goods. These Paleo-friendly recipes are free from, grains, sugar, and dairy, so you can feel good about indulging occasionally!

Or check out this giant list of Paleo-friendly muffin recipes for more ideas!

These homemade paleo scones are so good everyone will want one.