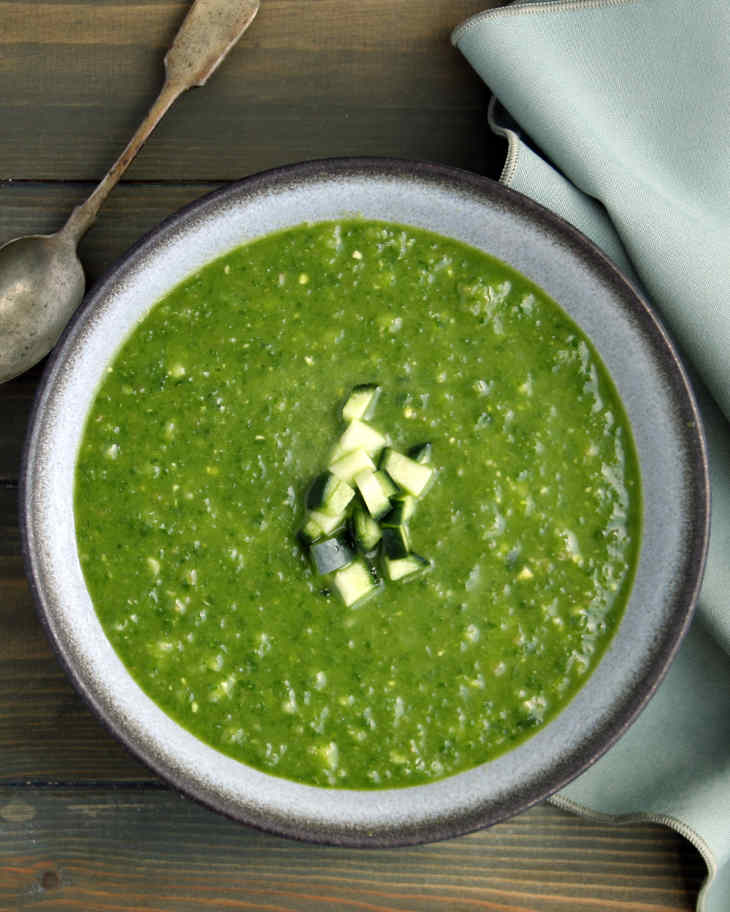 This lovely Paleo chilled emerald soup recipe is a nice departure from run-of-the-mill warm soups. It’s great to eat any time of year.

What is Emerald Soup?

If you look up emerald soup, you might find yourself reading about a British TV series for children. For our purposes, it’s best to think of emerald soup as spinach soup.

As you can imagine, a soup comprised of spinach might sport a bright shade of green. Some call it emerald green.

Emerald soup is pretty universal and pretty flexible. Besides the spinach, pretty much anything goes.

It can be served hot or cold, and a plethora of ingredients are acceptable to throw in the pot.

You probably wouldn’t use all of that together, but those are some examples of what people include.

I wanted to be this soup to be a symphony of green, so I mainly stuck with ingredients of a particular color.

Avocado, cucumber, and cilantro leaves all made the cut. I added melon for sweetness and lemon juice for tradition, but you’re still going to get a very green soup.

The biggest thing I needed to avoid for Paleo was the dairy. While not every emerald soup recipe would contain dairy, some do, and I try to avoid that.

In addition to milk or butter, some people dollop sour cream on top of the soup for garnish. Our recipe gives you the option of garnishing with diced cucumber.

For added flavor, you can add tamari to taste.

Spinach was a superfood before superfoods were even a thing. Even Popeye cartoons were touting its benefits.

The vitamin K levels in spinach are off the charts, but that’s not all. Spinach is also a good source of vitamin A, manganese, folate, magnesium, iron, copper, vitamin B6, vitamin E, vitamin B2, and the list goes on.

The only food label in a center aisle you’ll find like that is something that has been fortified. But Paleo is all about eating the real deal, and there are few better foods than spinach.

Be Mindful of Magnesium

Did you know that 75% of Americans are deficient in this essential mineral? That’s true whether you’re Paleo or not.

Unfortunately, your body absorbs a maximum of 40% of the magnesium you eat. So we’d all do well to make sure we’re getting plenty in our diet.

This Paleo chilled emerald soup recipe is a great way to top off your magnesium levels, but there are other foods you can eat too.

Check out this article about magnesium and why you might be deficient. You’ll learn the key benefits of magnesium and 8 magnesium-rich foods to include in your diet.

This fresh, bright green soup is packed with nutrients.