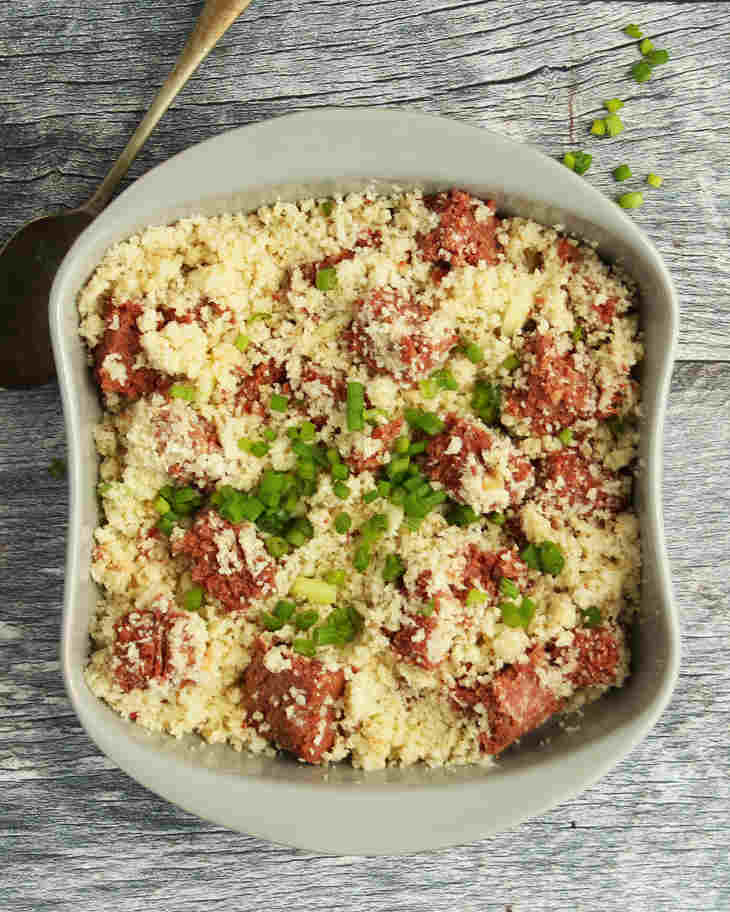 Try a healthier take on hangover food with this Paleo corned beef and cauliflower hash recipe.

Most Hash is Hardly Paleo

Culinary hash consists of chopped up meat, potatoes, and miscellaneous extras. For many people, hash browns are the most popular form, which is made of potatoes, onion, and lots of grease.

It’s often eaten for breakfast, and it’s a go-to hangover cure for many. I happen to find hash scrumptious at all hours of the day, however.

But there is a catch.

While maybe potatoes aren’t the worst thing you could eat, many Paleo folks avoid them in favor of sweet potatoes. The bigger problem with most restaurant hash would be the oil used to cook said potatoes.

Hint: It probably isn’t coconut oil. You’re likely looking at corn, soybean, or canola oil, which are all incredibly terrible for you.

And I’d have to bet you could also find sugar and artificial ingredients aplenty in your tasty hash.

That doesn’t mean you shouldn’t have your hash, it just means you should find a better way to make it.

This Paleo version has multiple advantages over greasy restaurant fare. For starters, it’s a lower-carb version of the dish.

Getting rid of the potatoes dramatically lowers the carb count, a good move for those of you looking to shed a few pounds.

Instead, you can use cauliflower rice. This inexpensive, neutral food item is a great partner to the corned beef in this dish.

It cooks in olive oil, a much healthier alternative to the seed oil that so many commercial kitchens cook with.

A generous amount of garlic helps enhance the flavor of the cauliflower and corned beef. You’ll use the white part of the green onion along with the hash as a nod to the traditional onion in hash. The green part of the onion is used as a garnish.

The corned beef can be used as-is. You’ll just want to cut it into little chunks to give it that traditional hash vibe.

In less than 30 minutes, you’ve got a fun, flavorful meal that doesn’t wreck your Paleo way of eating.

Some people who change to a Paleo way of eating find themselves eating a lot more protein. That means they can get bored with the same old meat dishes day after day.

You’re going to enjoy eating a lot more if you change things up! Check out this list of my very favorite beef recipes!

You’ll find a variety of ways to cook tender, juicy beef dishes that are unique and a joy to eat.

This humble Irish classic is so tasty and doesn’t take long to prepare.