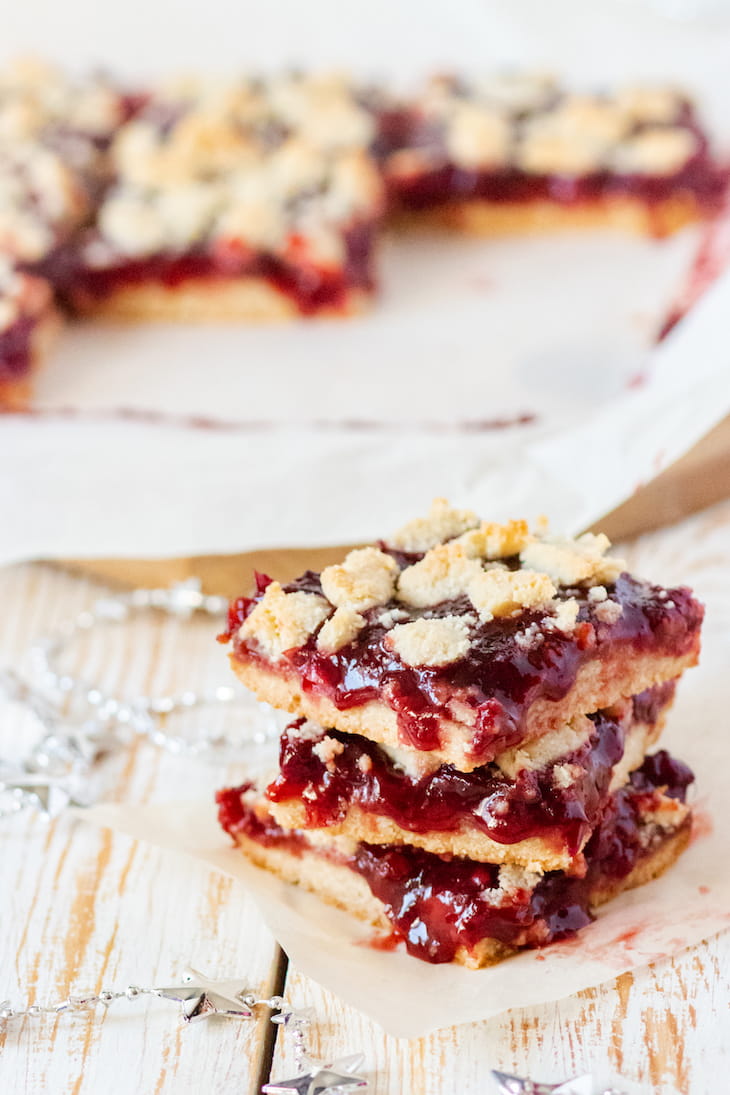 As soon as cranberries hit the grocery store shelves, I’m in full holiday mode! Truly, cranberry season is the best season, in my opinion.

To prove how delicious cranberries are, I created this Paleo cranberry bars recipe. And let me tell you, it’s one of my favorite recipes I’ve ever made.

It’s just sweet enough but not enough to overpower the deliciously tart cranberries. And it’s incredibly easy to make.

So, grab a bag of cranberries as well as a few easy-to-find ingredients and make these Paleo cranberry bars today!

What I love best about this recipe (other than the taste, of course) is that the Paleo version tastes better than the traditional version.

I used melted coconut oil instead of the mechanically-processed shortening because it is widely considered to be a healthy natural fat.

Coconut oil comes in two varieties: refined and unrefined (or virgin) coconut oil. I tend to use refined coconut oil when I bake because it has a much more mild coconut flavor than unrefined. However, it is completely up to you which one you use.

I used maple syrup instead of traditional table sugar because it is a natural sweetener. And it has a rich taste that adds a depth of flavor to the crust and crumble.

For the filling, you can use fresh or frozen cranberries. However, if you use fresh, be sure to rinse them very well before cooking.

I decided to use coconut sugar, which is similar to traditional brown sugar, to give the filling a rich flavor. You could use maple syrup, but the bars will have a pronounced maple-flavor since it is used in the crust and crumble as well.

I used orange zest in the recipe since it has a much better flavor than orange extract. After I zested the orange, I added the juice, about 1/4 cup (60 ml), to give the filling even more delicious citrus flavor.

Honestly, I used a cinnamon stick because that was all I had in my pantry. But you can use a 1/4 teaspoon of cinnamon powder instead.

And a helpful tip, be sure to let it come to room temperature before slicing into bars so the filling will have time to set. As you can see from the photos, I couldn’t resist cutting (and eating) them while they were still warm.

If this Paleo cranberry bars recipe has you hungry for more Paleo dessert recipes, then you are in luck.

And if you need non-dairy recipes, check out my pumpkin cheesecake bars and my raspberry swirl ice cream just to name a few of my Paleo dairy-free dessert recipes.

But don’t worry, I have tons of cookie recipes and brownie recipes as well.

And definitely check out my Paleo Champagne Celebration Cupcakes to help you to celebrate any special occasion!

For all of these recipes as well as many more, just click this link to find all of my Paleo dessert recipes.

Deliciously tart but slightly sweet, these paleo cranberry bars are a delicious addition to your holiday table.

For the cranberry filling:

For the crust and crumble topping: