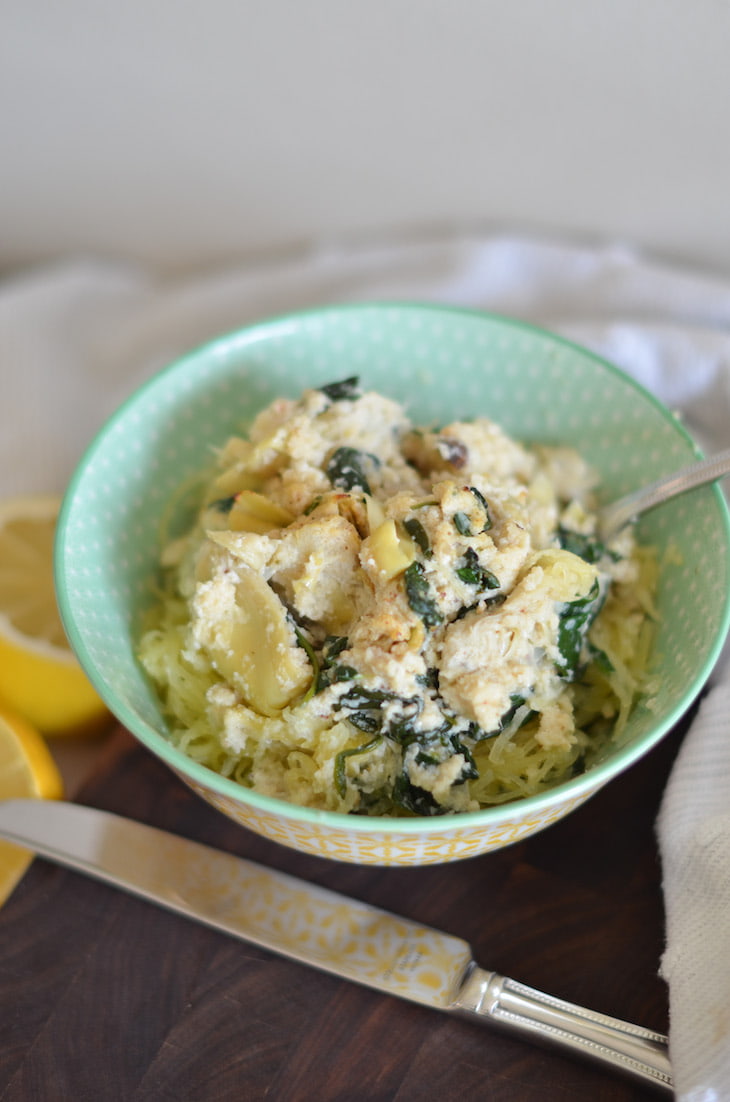 Starting a Paleo diet doesn’t mean you’ll have to give up your favorite meals. With a few easy swaps, you can still enjoy your favorite recipes and not feel guilty about it.

That’s why I love creating Paleo recipes so I can do all of the work for you.

And this recipe is completely nut-free for those who have nut sensitivities but still want to enjoy creamy, dairy-free meals.

And did I mention that this recipe is also completely plant-based? Of course, you can add some sauteed chicken to the recipe if you like, but I think it’s just as delicious meatless.

How I Made This Recipe Paleo

The first thing you likely noticed about the recipe is that it doesn’t contain traditional spaghetti. Instead, I used spaghetti squash as a wheat-free, Paleo-approved replacement.

If you have never had spaghetti squash, it is simply a winter squash that’s flesh separates into long, spaghetti-like strands after it’s cooked.

No spiralizers or fancy gadgets needed! Just use a fork to separate the cooked spaghetti squash into strands.

Personally, I prefer my spaghetti squash to have an al-dente texture, which is similar to traditional spaghetti. However, like any squash, spaghetti squash can get quite mushy when overcooked. So, be sure to watch the clock while it’s cooking!

I’m sure you are probably wondering if spaghetti squash tastes like traditional spaghetti, and the answer is no. Spaghetti squash does have a slight squash flavor. However, it is much less noticeable when you don’t overcook it.

And when you enjoy spaghetti squash with delicious sauces, you’ll never notice the squash flavor.

The next thing you probably noticed about the recipe is that it is completely dairy-free, which makes it Paleo-friendly.

Instead of milk or cream, I used cauliflower to make the creamy spinach and artichoke sauce. Simply boil or steam the cauliflower until it’s really tender and use a powerful blender or food processor to blend it until it’s smooth.

If you are worried about the sauce having an overwhelming cauliflower taste, don’t be. All you will taste is the other flavorful ingredients, especially the artichoke hearts and spinach.

And since the creamy sauce is made using cauliflower instead of cashews, your friends and family with nut allergies will be able to enjoy this recipe as well.

The last ingredient that might be new to you is nutritional yeast, which I used to give the recipe a cheesy flavor but without using any cheese.

Nutritional yeast, which are also known as savory yeast flakes, is simply an inactive form of yeast. This means that it isn’t like brewer’s yeast, which is used to help bread rise when baking.

Actually, nutritional yeast is a powerhouse ingredient as it is a complete protein and is a great non-animal source of B12, which is why it is so often used in vegan and plant-based recipes.

Nutritional yeast can be used as an ingredient in recipes or as a seasoning that you can sprinkle over food. It has a cheesy, slightly nutty flavor and is quite low in sodium.

One of my favorite ways to use nutritional yeast is to sprinkle it over steamed or roasted veggies to give them a bit of a cheesy taste.

But I like to use it to flavor snacks like my Paleo ‘Parmesan’ Kale Chips Recipe and my Cheesy Paleo Cauliflower and Bacon Recipe.

And if this recipe has you hungry for more meatless Paleo meals, then be sure to check out all of my Paleo vegetarian recipes.

Enjoy all of the delicious flavors of your favorite spinach and artichoke pasta dish but without any dairy or nuts. Plus, it’s Paleo, low carb, and completely plant-based.