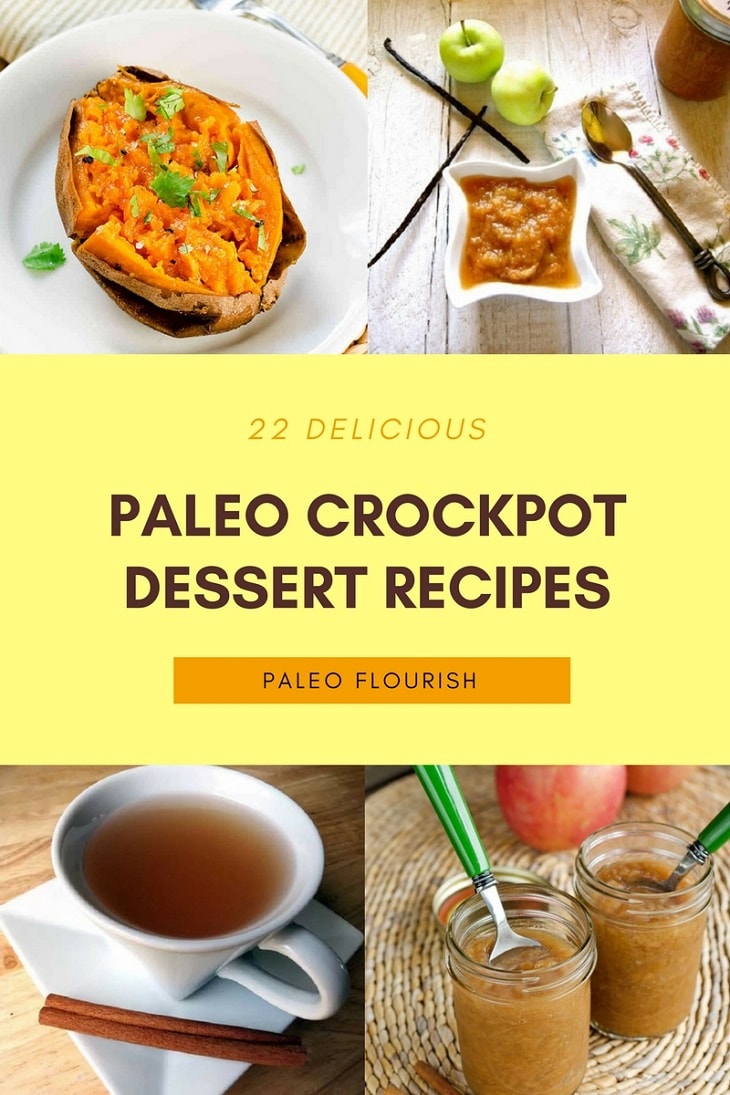 I have always found it difficult in the past to find recipes for desserts that are not full of processed sugar, wheat, and other non-Paleo ingredients, but now I can look through these Paleo Crockpot Dessert Recipes for inspiration.

Whether you are trying to lose weight or are following a plan for health reasons, I am sure you will find these dishes will fit the bill. This list includes recipes with fruit, yummy brownies, and my favorite – chocolate!

Obviously, desserts and sweets are a treat (even if they are Paleo), so enjoy them but be careful not to overindulge! 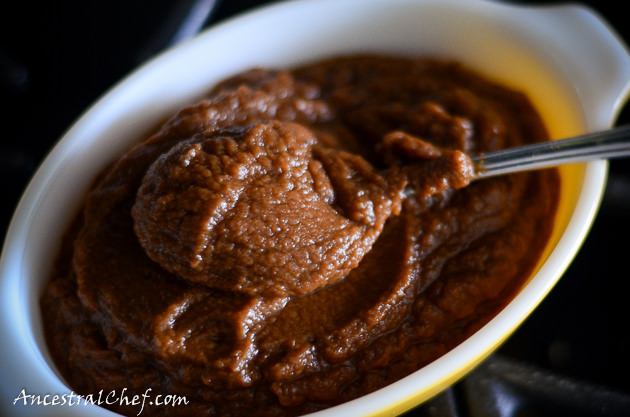 This apple sweet potato mash can be used as a sauce or as a delicious dessert. Make a large batch and keep some in your freezer for when you want a tasty Paleo dessert.

This recipe is reminiscent of the baked apples your Grandma made when you were little, with the juicy raisins and a hint of cinnamon that makes you think of Christmas. Now that you can make this applesauce so quickly, there is no excuse not to enjoy it anytime, even chilled as a summertime snack! Pink Lady and Gala apples are great in this recipe. 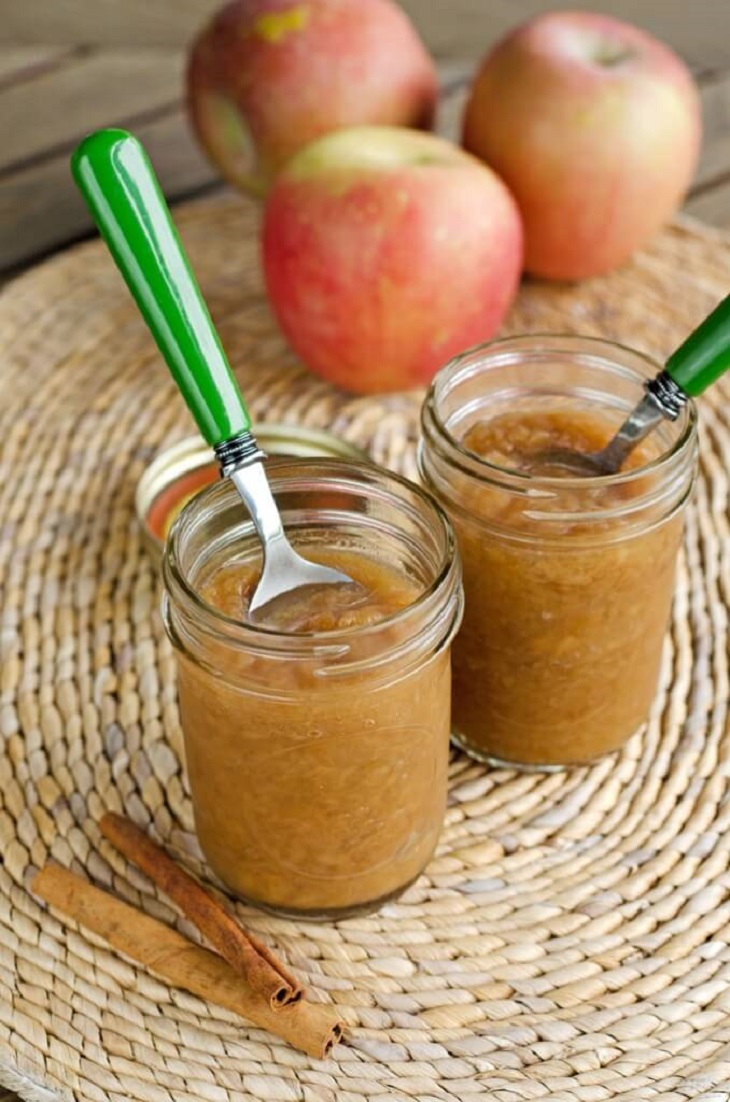 Here is another easy recipe that gives you delicious applesauce to enjoy. If you get the chance to visit a local farmer’s market, you quite often see unusual varieties of apple, so take the advice of the grower as to which ones are suitable for turning into a sauce. This recipe also has the advantage of making your kitchen smell of apple pie!

Applesauce makes a lovely fresh dish to have at breakfast or as something to serve along with meat dishes. It is a well-known fact that grated or cooked apple can help to settle a queasy tummy, so if you have a little one who is suffering and doesn’t want to eat, try giving them a little applesauce to make them feel better. 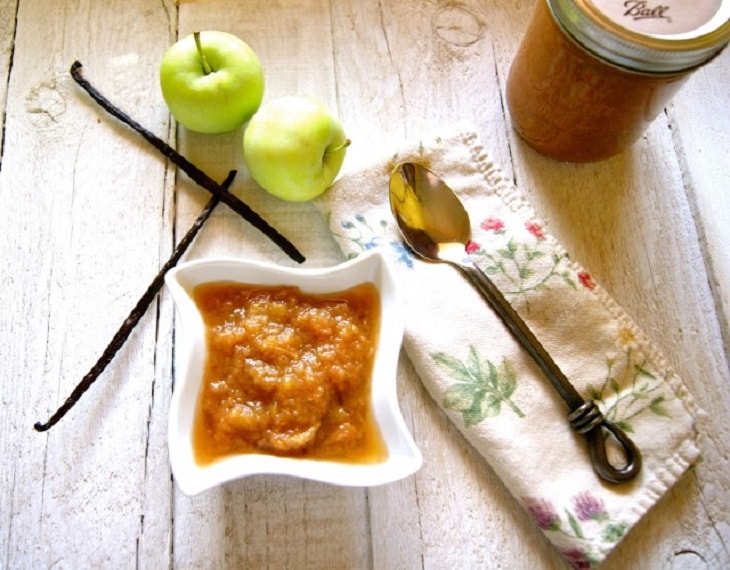 If you are lucky enough to grow your own apples, then windfalls make the perfect ingredient for this applesauce. However, you can usually find certain varieties quite cheaply anywhere. The vanilla in this recipe gives the apples an added depth of flavor and the salt complements the sweetness well. This applesauce can be frozen for use later.

Cranberries are so good for you and add a delicious extra flavor to this applesauce, but it also benefits from the ginger and cinnamon – flavors of the holidays! One of the most appealing things about this recipe is the final colors of the fruit, which show even more if you leave the sauce chunky rather than blending it. This makes a lovely dessert served with a dollop of coconut cream. 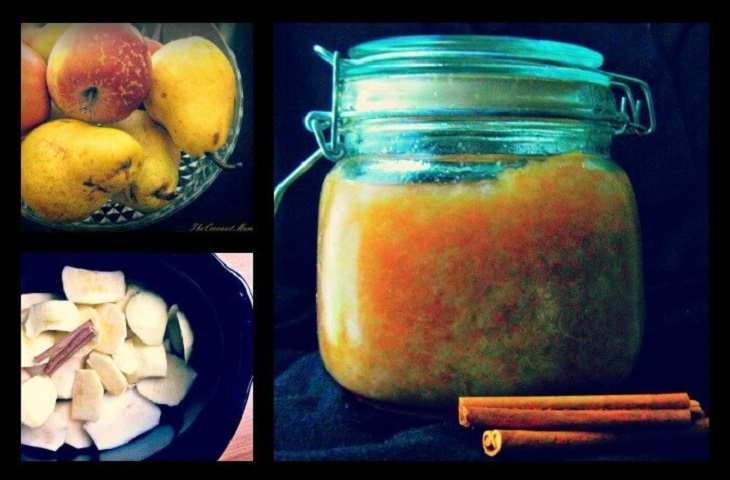 With the wide variety of apples and pears available nowadays, this sauce can be made to suit your own taste, but adding pears usually means the sauce will be sweet enough and will not need any added sweetener. The natural sweetness also makes it a firm favorite with the younger members of the family and this can be helpful if you are trying to get them to eat more healthy snacks.

Apple butter is simply a concentrated form of applesauce, but this one is made so much more special with the addition of the figs. They really intensify the flavor and go so well with the cinnamon and cloves. This apple butter can be enjoyed on its own straight out the jar or spoon some onto your plate with roast meat or spread on paleo bread.

Apple butter was traditionally a way of preserving apples to use after the harvest, and the same can be said today. It can be bottled or canned, or simply frozen for using later. It can be used in the same way as jams, or simply enjoyed on its own. It takes on a slight caramel appearance so don’t worry if the apples go brown – they are supposed to! This butter can be stored in the fridge for a couple of weeks.

If you are avoiding sugar it can be difficult to find a replacement when you just need something sweet, so try these delicious baked apples stuffed with butters and cinnamon for a satisfying and tasty dessert. How long you cook it for is up to you – cut down the time for a firmer texture or cook for longer if you prefer an applesauce consistency.

Because the figs and coconut sugar add sweetness to this dish, you can use a cooking apple like Granny Smith, which is quite tart. These stuffed apples give you a real taste of apple pie, thanks to the nutmeg, cinnamon, and zest, and make a fabulous dessert, especially on a cold winter’s day. If figs are not in season, simply swap fresh for dried in this recipe. 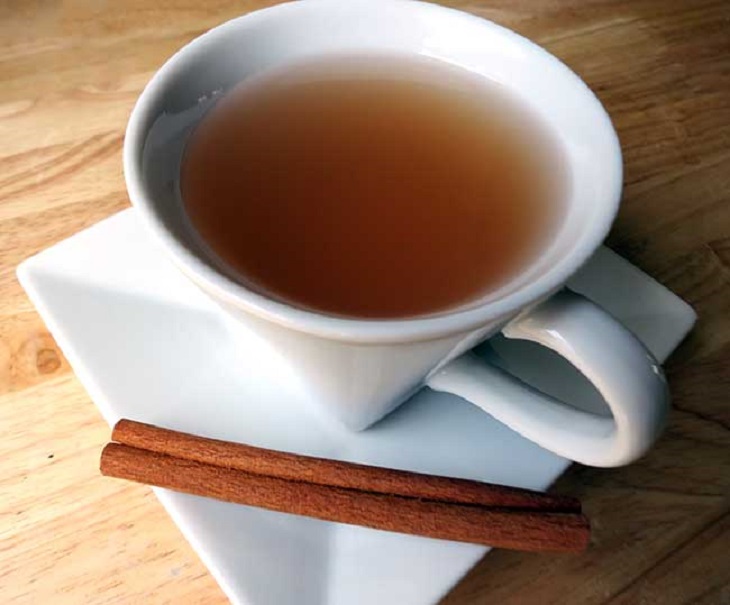 It is quite simple to make this delicious drink, which can be served either warm or cold. You can use whatever apple combination you like, but sweet and tart work really well together. The cinnamon and cloves give a warming feeling to this drink already, but try some warmed on a chilly evening to heat you through.

A casserole for dessert? Really? Well, yes! Sweet potato mash flavored with vanilla and coconut and topped with chopped nuts for an added crunch, and you have a lovely dessert to feed the family or as a final course for a dinner party. If you would prefer, you could use cooked and pureed squash such as butternut instead of the sweet potatoes. 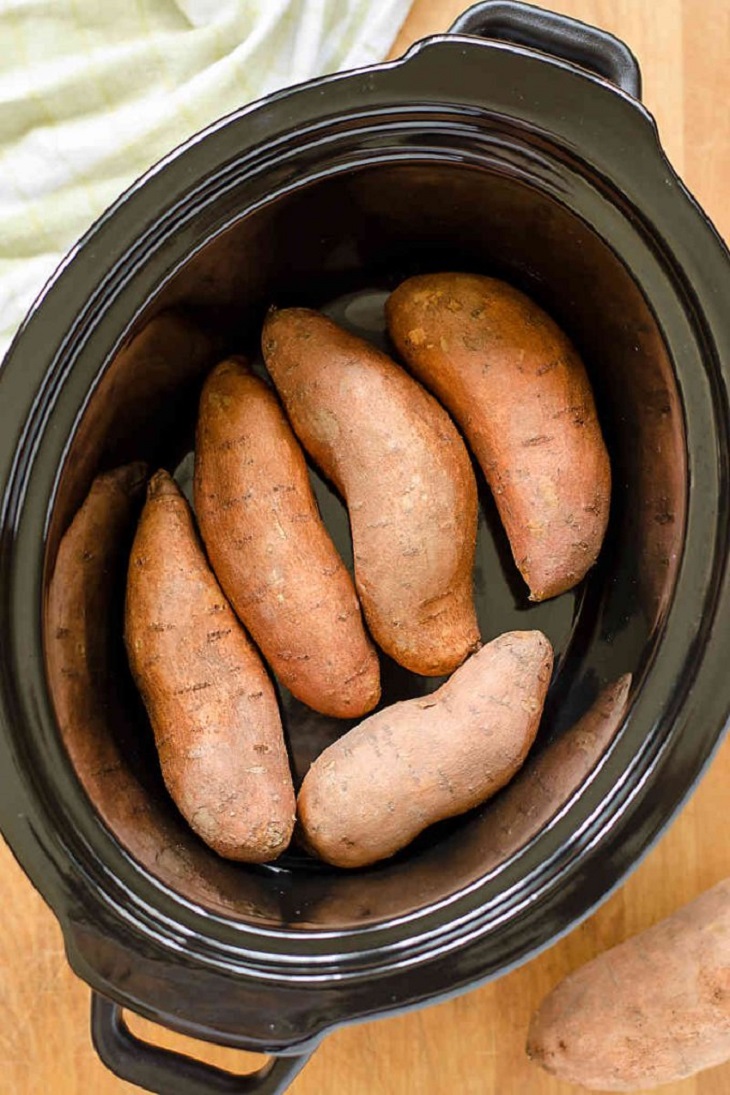 This is such an amazingly simple recipe as it involves no prep time at all, but the results can be fantastic! Once the sweet potatoes are cooked, just open them up and use whatever topping you prefer. A couple of ideas would be a mix of nuts and berries, or indulge yourself with dark chocolate and shredded coconut – the choice is yours!

Although this recipe was designed as a breakfast dish, it is sweet and nutty and makes a fantastic dessert. Here the nuts can be ground to suit your taste and give a great flavor to the butternut squash and apples. This dish can also be topped with your favorite ingredients such as shredded coconut or applesauce.

The fact that you are slow-cooking this pumpkin gives it the lovely rich color and flavor, making it a favorite for breakfast, spread on paleo bread of your choice. It is not wise to can pumpkin as it is a low-acid food, but it keeps well in a mason jar in the fridge for a couple of weeks, or it could be frozen instead.

Crockpot cookies can be the perfect way to satisfy a chocolate craving when the oven is in use for something else! They are golden and delicious on the outside, yet slightly gooey on the inside, although they do firm up when cooled. Use the parchment paper to help lift the cookie slab out of the pot and leave to cool before cutting.

Dairy-free fudge may be a dream for some people, but here is the recipe to prove it can be done! This is not too sweet but is rich in flavor so you should cut it very small and use it as a treat, not a regular feature. Stirring the mixture for ten minutes sounds a bit long, but here is the perfect idea for bribing teenage children! Store this fudge in the fridge as the coconut milk will make it go soft at room temperature.

Even the name of this recipe sounds delicious – brownie bites! You can just imagine sinking your teeth into one right now and they are easy to make. You could even make a mini version for a kid’s party by using a smaller spoon to remove from the crockpot. If you don’t like coffee, this recipe works just as well using plain water instead.

Monkey bread was originally designed as a ‘tear and share’ to be enjoyed between family and this one is based roughly on that idea, although the ingredients are not identical. This bread would be perfect served for a sweet treat with coffee or even as a dessert drizzled with the leftover topping. If you have a large crockpot, just increase the amount of dough you make.

Cranberry Juice made in a Crock Pot 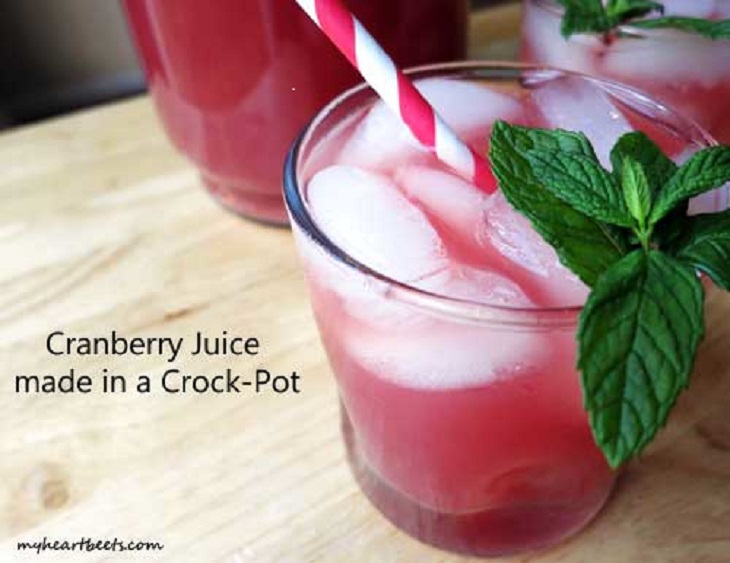 Cranberry juice is so refreshing, although it does require some added sweetness from the honey, but served ice-cold, it can be a great summer drink. Cranberry juice has long been known to have health benefits with regard to women’s well-being, helping to alleviate such conditions as cystitis, but apart from that, it tastes great! For a party drink, try adding some raspberry vodka and use frozen cranberries instead of ice.

The combination of sweet and salty is becoming so much more popular now, with such things as salted caramel, and this combo works really well with pecans, turning them into a great snack to serve at a drinks party or just to fill you up. If you don’t want to use maple syrup then liquid stevia would work well with this recipe.