Donuts have been one of my favorite comfort foods since I was a child. But when I gave up wheat flour as part of going paleo, I thought I would have to kiss my donut love goodbye. I was so wrong! To help out my fellow donut-lovers, I’ve put together a list of my favorite Paleo-friendly donut recipes, perfect for a sweet treat or occasional indulgence.

Thanks to ingredients like almond and coconut flour, these donut recipes are easy to make at home, no deep fryer required! From classic cake donuts to inventive holiday-inspired gingerbread donuts, there’s a donut for everyone on this list!

Here are just a few of the Paleo Donut Recipes we’ve included: 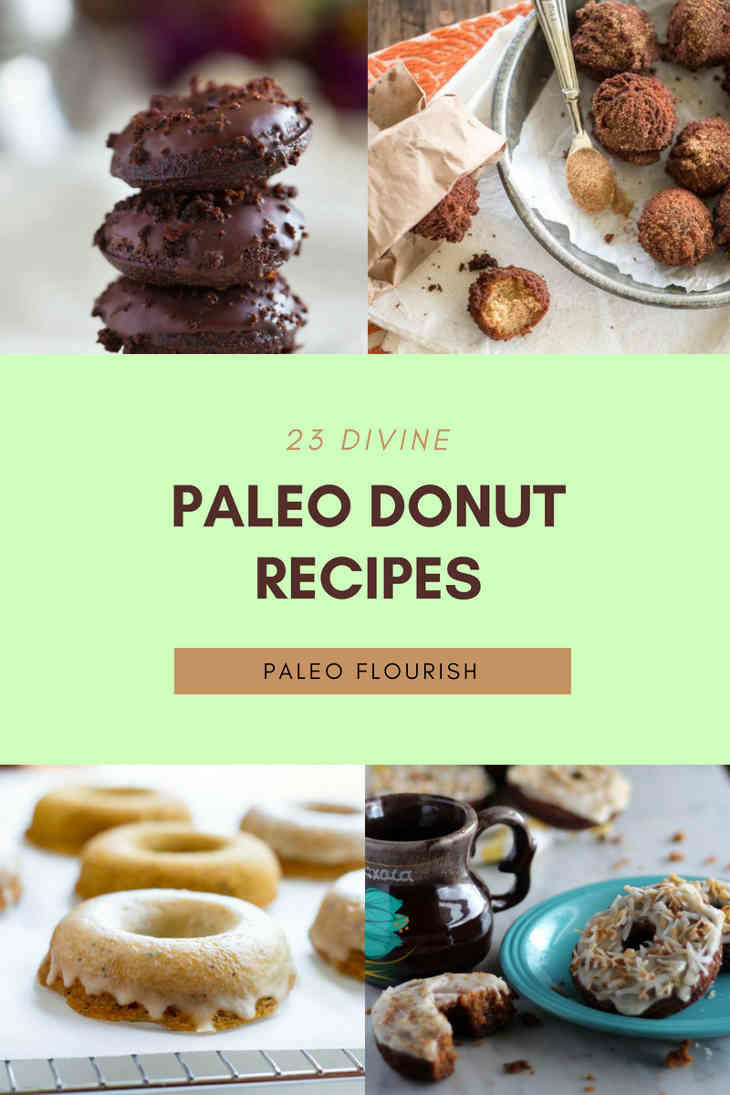 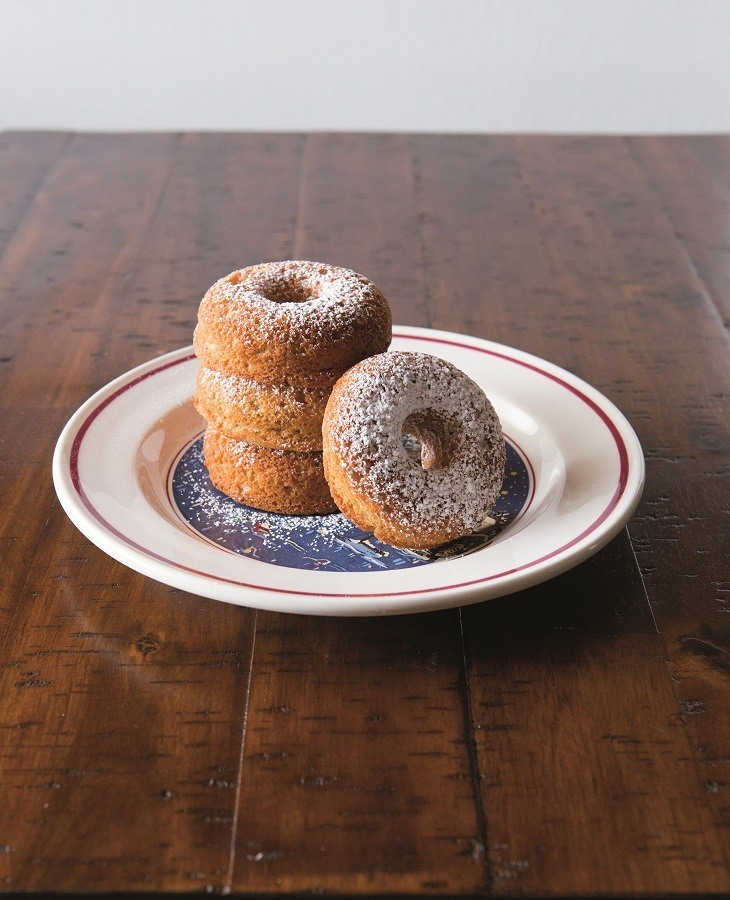 One of the best things about maple syrup is the rich aromatic flavor it gives to baked goods like these amazing Paleo doughnuts! They have the traditional springy texture and taste fantastic with a cup of coffee. They make a lovely dessert served with coconut cream and fresh berries, or just for a quick and easy breakfast. These doughnuts can be stored in the freezer, but they taste best freshly cooked.

– Clean Eating with a Dirty Mind 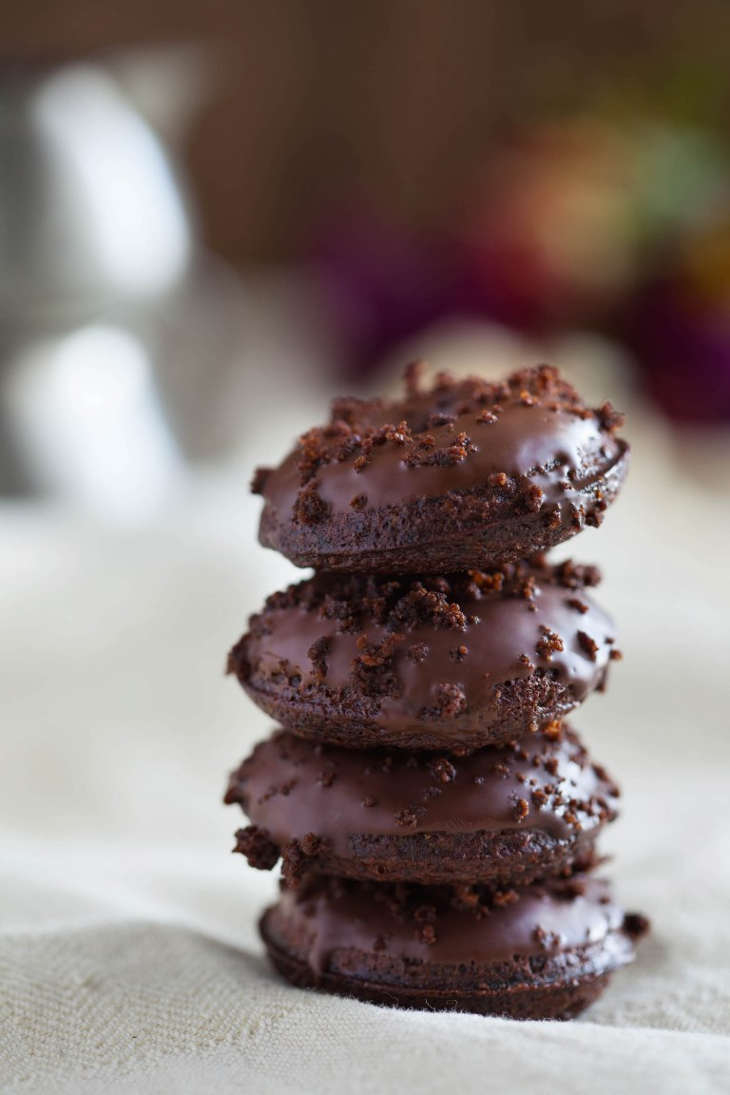 Photo Credit: Vanessa from Clean Eating with a Dirty Mind

The donuts in this great Paleo recipe are mini ones, which are great for kids’ parties as they have a rich, chocolaty flavor and taste delicious. I like to make these to take to friends’ houses when we are invited for coffee and no-one seems to notice that they are healthier than regular ones. I like these so much that I don’t bother crumbling the last two – I just eat them! 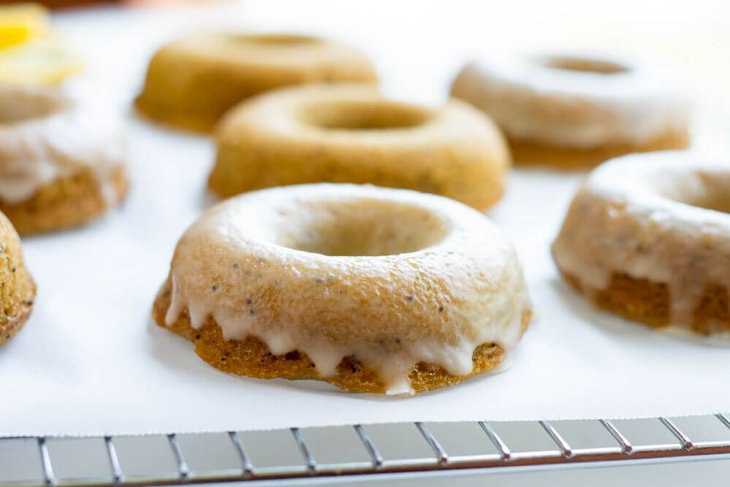 There is something really moreish about lemon in baked goods as it gives them a lovely fresh flavor. These gluten and grain-free donuts are baked instead of deep-fried like regular ones and this makes them even healthier. If you don’t like poppy seeds you can just omit them, and if you like your lemon donuts even zingier you could add some extra lemon zest to boost the flavor.

Sometimes donuts can be a bit dry, especially if you leave them till the next day, but these grain-free lovelies are moist and so delicious thanks to the grated apple. This would be a good way to use up windfall apples if you grow your own, or you could source some heritage varieties at your local farmer’s market for a really special flavor.

Because these grain-free doughnuts are richly spiced with cinnamon, nutmeg and cloves which are all things you associate with the Fall, these would be a great idea for a Halloween party or when folks pop round for coffee. They are denser than regular donuts but are still healthy and delicious. If you are not keen on the flavor of maple syrup you can substitute raw honey instead.

When I found this recipe I was in heaven! Chocolate and strawberries are two of my favorite foods and to think of them together in a donut was just my idea of dreamy. They turned out so well that even my non-Paleo friends went mad for them and now I get asked to bring them to every coffee morning! I like to dip half of the donut in the glaze but you can be as artistic as you like!

When I used to make donuts for the family the old-fashioned way, I was sometimes disappointed that they were a bit greasy, so now the baked ones are our favorites. There are so many ways to add flavor and the choice of glazes is endless! These maple-glazed donuts are Paleo, gluten, and grain-free and would make a lovely gift for a friend who is celiac. The maple glaze tastes amazing!

You know those days when only chocolate will do? Well, I have found the answer in these rich and chocolaty doughnuts! They have chocolate chips in the mixture and are then frosted with more chocolate so even the most ardent chocoholic will be satisfied with these! They would be great for a celebration of an anniversary, or you could even serve them instead of a birthday cake!

Here is one of those super-helpful basic recipes for quick and easy grain and gluten-free donuts that you can then make your own by adding in different ingredients and using all kinds of glazes. The donuts have only four ingredients and most of us will have them in the larder so no need to rush to the store. These donuts are not too sweet so they would be ideal to add fruit or chocolate chips too. 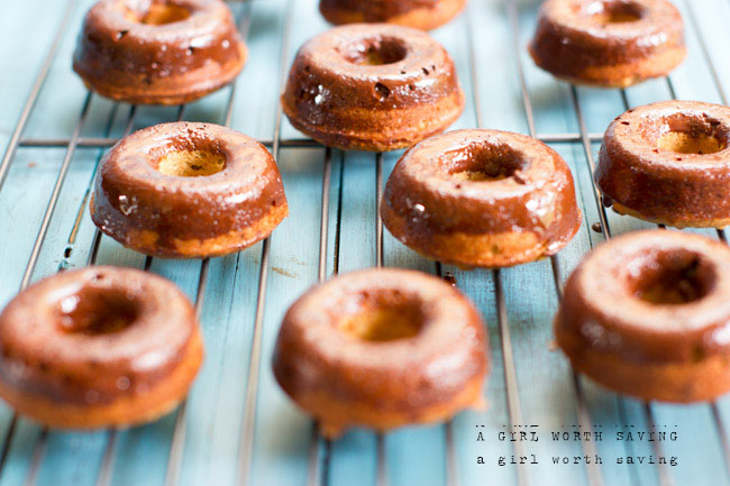 Photo Credit: Kelly from A Girl Worth Saving

These little mini Paleo doughnuts would be such a good idea for a kid’s party or just to enjoy by yourself with a good cup of coffee! They are not dry but have a great cake texture and are much healthier than conventional doughnuts, which are usually deep-fried. The chocolate sauce tends to soak into the doughnuts making them even more delicious, and they would also be a great addition to a lunchbox. 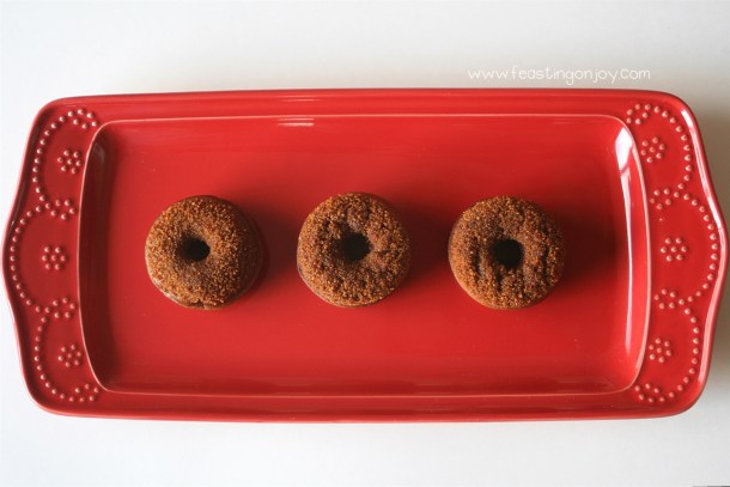 These mini Paleo donuts are just begging to be dipped or dunked and then eaten along with a nice cup of tea or coffee! The ginger flavor comes through well but I always add a bit more as my family is real ginger fans. I like to provide a couple of dipping options so people can choose their favorite, but ginger and lime go hand-in-hand so I usually make a lime dipping sauce as one of the choices. 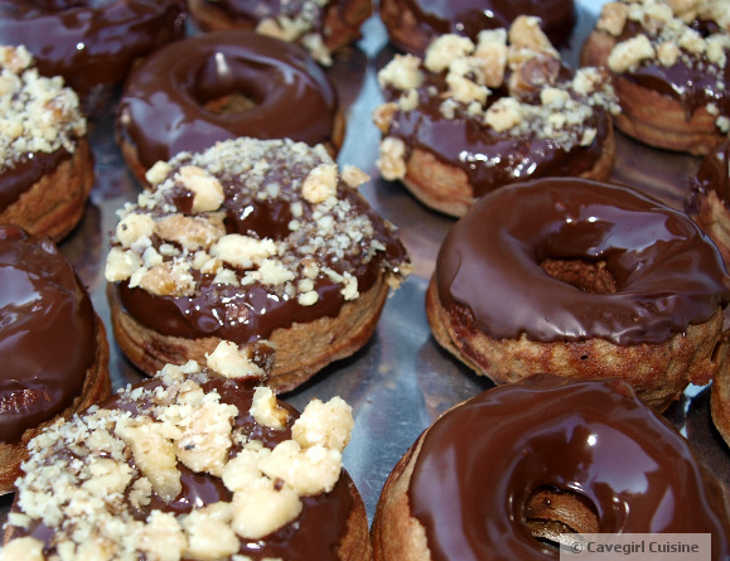 When you see these doughnuts you would never guess that they are Paleo-friendly! These would fool anyone into thinking they were made to the original recipe using wheat flour and loads of sugar. Don’t worry if you don’t have a doughnut maker as these beauties can be made in a deep fryer or deep frying pan. These would be perfect for a celebration or as a gift for a hostess at a pot-luck.

– It’s All About AIP 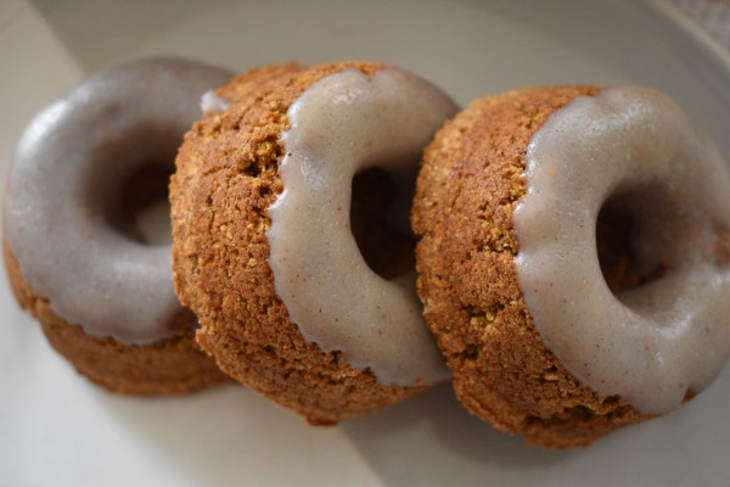 Photo Credit: It’s All About AIP

During pumpkin season it can be useful to have a few recipes like this one on hand to help use up leftover pumpkin. These mini donuts are grain, gluten, and dairy-free but taste so good because of the spices used. I always try to have some of these ready if there are kids coming to visit as you sometimes don’t know what allergies they have, and these amazing donuts are pretty safe for everyone. 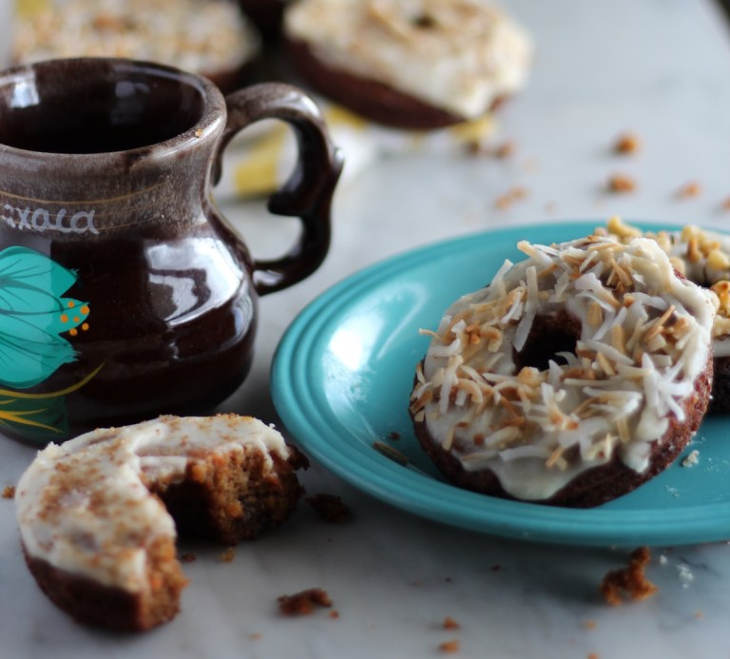 If you are a fan of carrot cake (and who isn’t?) these amazing donuts will go down really well. They have all the flavor of traditional carrot cake but without the gluten, and like most Paleo donuts they are baked and not fried. When I make these lovely treats I like to soak the raisins in some tea for an hour first so they plump up and add an even nicer flavor. 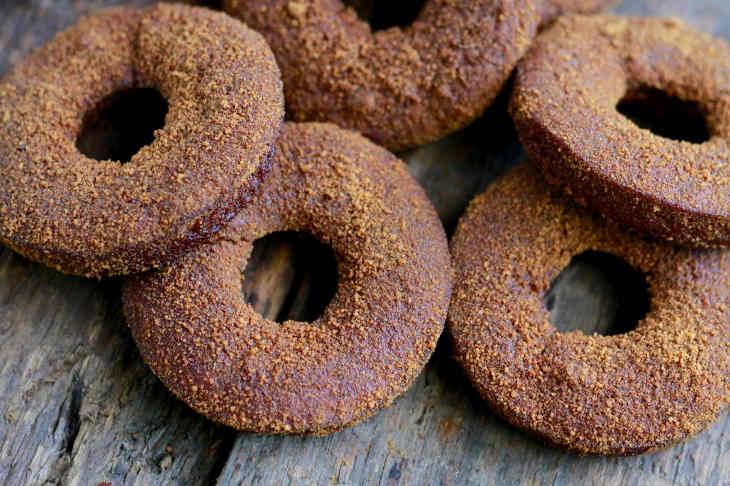 Here is another great Paleo recipe for donuts that are grain, gluten and dairy-free, and that have all the spices associated with Fall. These baked beauties would be a great idea to serve on Halloween, but they go down well at any time! They would even be great for breakfast on a chilly day as the spices are warming and will get you off to a good start in the morning. 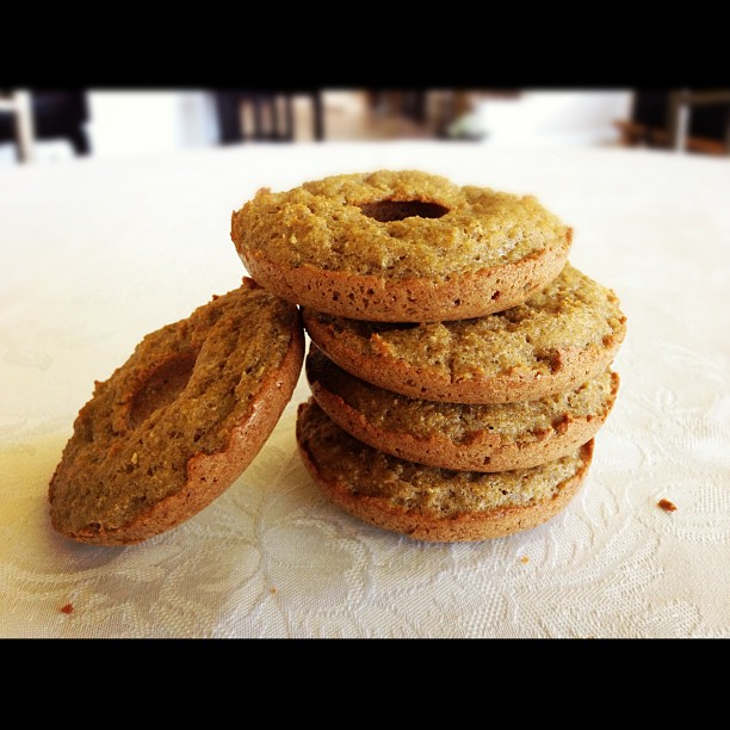 Cinnamon is such a good spice to use in baked goods as it lifts the flavor so well and gives them the taste of the holidays. I often make cinnamon donuts for breakfast at Christmas and they go really well when you serve them with some fresh berries or some low-carb cranberry sauce. These donuts are grain-free but taste just as good as regular ones. If you find these a bit too sweet just cut down the amount of stevia. 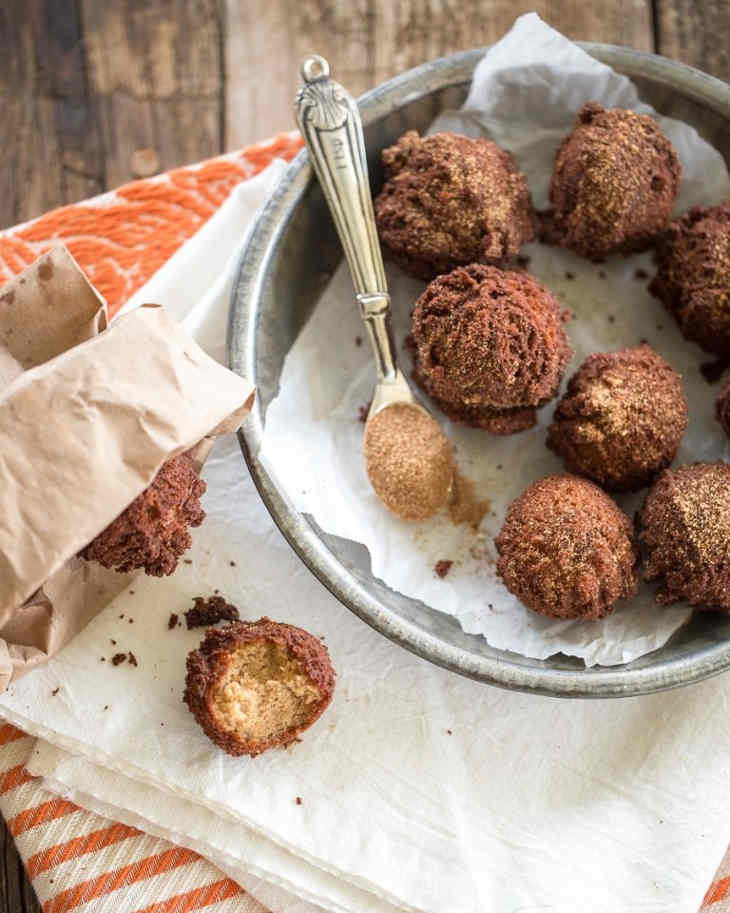 Ever wondered what happens to the bit that’s missing from your donut? Here is the answer – someone turns them into donut holes! Best invention ever as far as the kids are concerned! As these little Paleo-friendly donut treats are fried, it is best to cook them in smaller batches to avoid the temperature of the oil drop too much. These have a habit of disappearing as I cook them, thanks to sticky little fingers!

If you like donuts with your coffee, why not try combining the two? These wonderful pumpkin spice donuts have a generous amount of coffee flavor so you get a two-in-one effect. With all the amazing donut recipes available, there is no reason why Paleo people can’t enjoy this popular treat too. If you don’t have cold brew coffee then regular coffee would work but the flavor won’t be as strong. 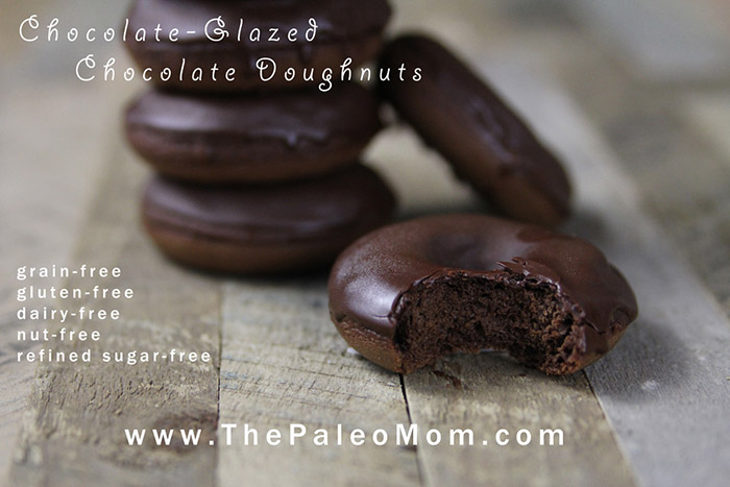 These doughnuts definitely don’t look gluten, grain and sugar-free – in fact, they look totally indulgent. This recipe uses plantain as its base, cutting out the need for flour of any type, and you are in charge of making them as sweet as you like by altering the percentage of sweetness in the glaze. A box of these would make a fabulous gift for a friend or family member too!

Because you are using a yellow plantain in this Paleo recipe you will find the donuts are moister than some, which is no bad thing! It tends to give them the same consistency as regular gingerbread, although if you are a fan of ginger you might want to increase the amount given here as the flavor is very mild. If you want a bit of added fruit you could try putting some raisins into the mixture as they go well with ginger too.

I know there are still some skeptics out there who don’t understand about salted caramel but trust me, once you’ve tried it you won’t have any doubts! These Paleo donuts are rich and chocolaty and have a depth to the flavor because of the dates, which also add natural sweetness, so you don’t need to add any extra. This recipe can be made into muffins instead if you prefer and you don’t need to amend the recipe.

If you need little Paleo snacks for a party or just to go with your coffee, these delicious donut holes could be the answer. They are wonderfully crisp on the outside with a moist and spongy middle and can have a good flavor of apple if you use a stronger variety like Granny Smith. These are a grain and gluten-free snack and they are always a winner packed in a lunchbox!

Mint and chocolate seem to go hand-in-hand in loads of sweet treats and these Paleo donuts are no exception. They really do taste as good as they look! Although this recipe for mint/choc donuts calls for liquid chlorophyll you do not have to use it if you are doubtful, simply replace it with some mint extract. It can also be fun to serve this with a low-carb chocolate dipping sauce and let everyone dunk their own donut!