7 Ways Eating Fruit Made Me Smarter, Healthier, and More Paleo 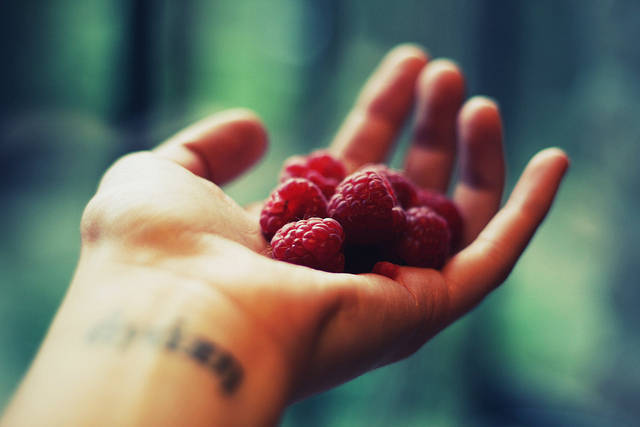 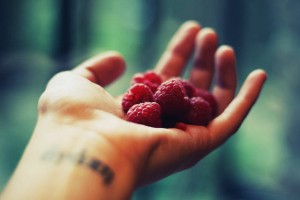 Get this…Americans eat about 30% more “processed fruit” than fresh fruit.

What the heck is processed fruit?

I know what processed grains look like (flour and stuff). The differences between processed and fresh meats are pretty obvious (deli versus butcher). But processed fruit? Where’s that in the store?

This question might seem a bit out of the blue to you, but I’ve been reading a lot about fruit. Here’s Why…

I have a mental block against believing fruit is healthy

I know it sounds odd, but fruit seems like sugar and water to me. And I think that processed sugar is addictive, leads to overeating, and is toxic when consumed in even moderately large amounts.

And so I can’t help but think that fruit may not be ideal.

But I realized that as much as I know, I’d never really delved into fruit. so I decided to better educate myself. And boy, did I ever. I literally wasted an entire Tuesday reading about fruits. (Louise wasn’t thrilled about this, since I had a variety of other projects I should have been working on. But come on! We need to know this stuff, right?) 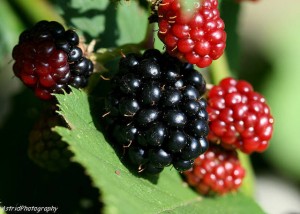 And do you know what the earliest domesticated fruit was (almost 11,000 years ago)? A fig.

(In all honesty, I’ve never even had a fig!)

I know, this is all sort of interesting, but you really want to know if fruits are really Paleo, if they’re good for you, and how they made me smarter. Well here you go…

But first! A video!

7 Ways that Eating Fruit Made Me Smarter, Healthier, and More Paleo

1. Fruits are as Paleo as Anything Else. No matter where you start from, fruits are Paleo. (This might be something you took for granted, but I did not.) Here’s why:

a. Almost all modern fruit is domesticated. Outside of some lesser-known fruits like lingonberries, most fruit that you can find today is the result of domestication and selective breeding by humans. In other words, humans chose the fruits that they liked best, and they grew more of them. That’s good (we didn’t pick the poisonous fruits) and bad (most fruits are higher in sugar than their ancestors). Still, that’s just a selection process, and it’s the same for all vegetables and most livestock. That’s not a complete justification, but it’s a reality check.

b. Almost all fruit is hybridized. When you say hybridized, most people think of Pluots and Tangelos – fruits that came from two other fruits (the pluot is a combination of plum and apricot). Those are clearly hybridizations, but so are every other fruit. Hybridization is natural, in that cross-pollination happens all the time, and different species of fruits inter-breed. Humans speed up and influence this process, but our intervention is not different in any qualitative sense.

In the end, almost none of the fruit you eat today existed 10,000 years ago, but nor did any of the vegetables or meat you eat. It was all different. And different is not necessarily bad. It’s just different. That’s Paleo enough for me. 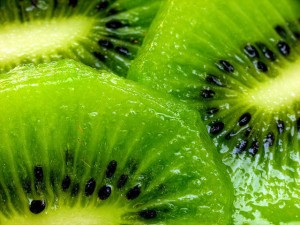 2. Fruits Are Low in Toxins. If you know me at all, then you know that I judge foods first by how toxic they are. Grains, seed oils, and processed sugars all fail this test, since they’re high in prolamines, Omega-6 fats, and, well, excess sugar.

Fruits, though, are quite good in this respect. And it makes sense. Fruits evolved to be eaten. The seeds inside of a fruit don’t get digested, so they either get discarded or pooped out, allowing the fruit plant to potentially reproduce.

Fruits have no prolamines, few lectins, almost no phytates, and no Omega-6 fats (outside of a few specific fruits). Most importantly, though, even fruits like apple and bananas, which are some of the highest-sugar fruits, only have at most around 25 grams of sugar per fruit. That’s not bad, considering those are some of the highest.

Now, as I’ll talk about below, there are certain instances that fruits wouldn’t be good for someone, but for the rest of us, very non-toxic overall.

3. Fruits are Good, but Over-Rated for Nutrients. I’m rarely accused of bowing to conventional wisdom, and this is probably another example. Everybody and their mother thinks that fruits are so full of nutrients.

They have some nutrients (often B vitamins, vitamin C, etc.), but overall, they’re pretty low on this scale. Here’s a link to a blog post that summarizes Mat Lalonde’s research that he presented during the 2012 Ancestral Health Symposium. As you can see, fruits are about 2/3 of the way down the list. Not very nutrient-dense at all.

In the interests of disclosure, Mat is reworking that data, since it didn’t properly stand up to stress-testing, but it’s not going to change the numbers very much.

Now…not every food we eat needs to be incredibly high in nutrients, and fruits do have some, but they’re not the powerhouse they’re claimed to be at all.

That said, they do have some nutrients that are not taken into consideration by Mat’s chart. First, soluble fiber. Soluble fiber is very important for gut health, and most fruits (along with Tubers) have it in spades. Secondly, pigments. The coloring of fruits also typically provides a variety of health benefits, which is summarized well in this post from Mark Sisson. 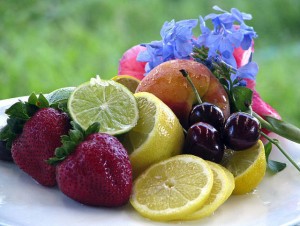 4. Some Fruits are Not Fruits at All. Huh? Here’s what I mean:

I had never really thought about the fact that there were processed fruits. Didn’t even know what it meant.

Processed fruits are fruits that are canned, frozen, juiced, dried, and maybe a few other things. Kinda makes sense to me now.

Except that it also shouldn’t make sense.

Juiced Fruits are not fruits. Fruit juices are no different than soda. At all. It’s sugar and water either way you look at it. Just because the sugar from fruit juice started in a fruit doesn’t mean squat. It takes around 6 oranges to make 12 ounces of orange juice (assuming it’s fresh-squeezed). How many oranges can you eat at a time? Not 6. Real fruit has flesh and fiber. That should tell you how much sugar is in a glass of orange juice, which immediately renders it toxic to your body.

Dried Fruits are not fruits. Real fruit has water. Humans have been drying fruit probably since we started domesticating it, but that doesn’t make it any healthier. Removing the water means that you can eat a ton of dried fruit in one go, again introducing toxic levels of sugar into your body. Not fruit.

As an aside, I’ll write a whole post on sugar at some point, but toxicity is determined by dose, as with anything. This means that you can get small amounts of sugar from your food and be fine, but when you start increasing it (ironically beyond what is found in nature or thereabouts), then it becomes toxic.

5. Frozen Fruit is the Best. Literally. It’s almost always better than fresh fruit. This is something I feel like nobody knows.

The deal is that fresh fruit is picked before it’s ripe (so not as many vitamins develop), and then it’s subjected to a lot of heat and light during transportation to your local store (which break down many of the nutrients). This is not true of in-season fruit at your local farmer’s market, but is always true of fruit at your supermarket.

On the other hand, frozen fruit is picked when ripe, blanched in hot water or steam (which does break down the vitamins just a bit), and then frozen. And do you know what freezing does? It preserves all the nutrients.

Clearly, if you’re eating fruit from the tree or from the farmer who just picked it off the tree, it’s as good as you can get it. If not, go for frozen fruit.

By the way, did you know that fruit is actually the most popular snack in America? I never would have guessed. It just barely edges out chocolate, followed by potato chips. Huh…

6. Fruit Isn’t Right for Everyone. I’m lucky. I love fruit and it seemingly loves me. But it’s not the case for everybody.

In particular, if you’re diabetic, insulin-resistant, or have gut issues, then fruit can be a problem. In each of these cases, it can make healing harder and slower, even if you’re otherwise eating a healthy diet.

That’s not to say that fruit causes any of these problems. But once you have trouble controlling your blood sugar, eating fruit will only make it harder. And if you have an overgrowth of bad bacteria in your gut, fruit will often give it something more to feed on.

Know who you are. We don’t eat things that make us feel bad, but we happen to be lucky that fruit is not one of those things. 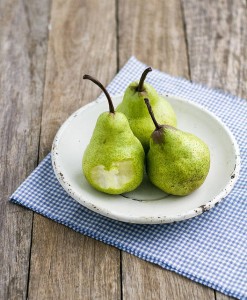 7. Eating Fruit Made Me Realize I Don’t Need to Be Quite So Stressed. Of all the parts of my life I have under control, stress really isn’t one of them yet. I’m working on it. And eating fruit helped.

In particular, I’ve been eating a lot of pears lately. Sometimes 2-3 per day. And I kept having this nagging voice in the back of my head telling me that I really shouldn’t be eating quite so much fruit.

And then I stopped and thought about it (and read about it for a day). That’s pretty much all the fruit I eat. 2-3 times per day at most, and much less in the winter and spring.

Fruit is not a superfood – it’s pretty low overall in nutrients – but it’s not toxic either. And I eat A LOT of other nutrient-dense foods.

In other words, I don’t really need to be worried about it. I just need to enjoy my pear.

What Are Your Favorite Fruits?

I wrote this article because people ask me about different foods all the time. But almost nobody asks me about fruit.

What that means is that you’re probably the only one reading this article. But it also made me wonder why nobody talks about fruit. And I’m still not 100% sure, except that most people consider it almost sacrilegious to say that fruit isn’t that healthy.

Beautiful post, Jeremy! I seriously doubt I’m the only one reading it. 😛

Fruit is a tough one: People have a hard time accepting that fruit is anything other than one of the healthiest things you can eat. In fact, our understanding is often so perverted that we think that the more food we eat, the healthier we’re being. What other food do we allow ourselves to gorge ourselves on under the auspicies of “being healthy”?

I think that with the work of Mat, the paleo movement and people (such as yourself) having smart discussions about it, our understanding will evolve and we’ll have a better vision of how fruit fits into the complex matrix of choices we now misrepresent as “a healthy diet”.

Thanks so much for the awesome comment! I’m glad just to be a part of the “smart” discussion. (As for me, I’m eating a pear as I type this…lol.)