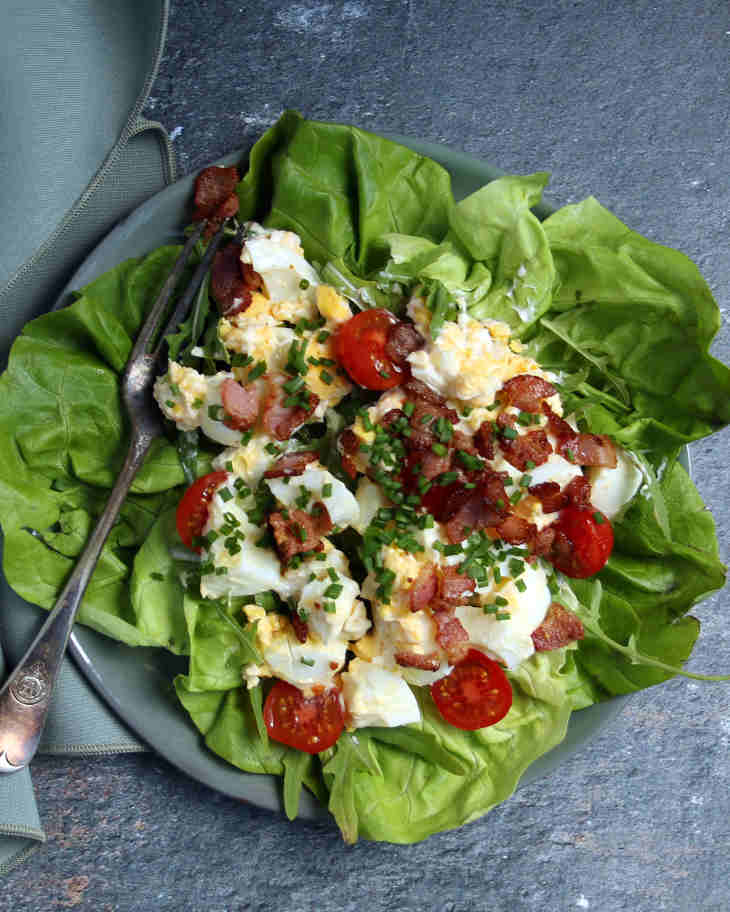 Everything’s better when it’s loaded! This Paleo loaded egg salad recipe is so good you don’t even need bread!

What’s in a Loaded Egg Salad?

While you can’t go wrong with a classic, there is something to be said for extras.

For color, I added bright red cherry tomatoes. Those little guys really pop out in the muted yellow egg mix.

Salt and pepper season the salad. You can add this to taste.

But the piece de resistance is bacon. Crispy fresh bacon adds that salty, savory flair to your most ordinary eggs.

Think about it – it’s bacon and eggs! The most classic of breakfast combos. When you think about it, adding bacon to egg salad is long overdue.

Make the Best of Mayo

In its essence, mayonnaise is already Paleo. It’s just oil, egg yolks, and vinegar or lemon juice. Salad dressing, on the other hand, would not contain the egg yolks.

The potentially tricky part of mayonnaise is that the store-bought stuff can contain ingredients that aren’t Paleo.

The oil tends to be the biggest issue. Many brands use soybean oil, which is one of the ones to avoid. Olive oil or coconut oil would be better choices.

The other big issue with off-the-shelf mayo is that it often contains added sugar. It may not be much, but it doesn’t need any at all.

The popularity of Paleo has given rise to more choices, and you may well be able to find name-brand options that fit the bill. Specifically Paleo mayos can be purchased online, or you can make it yourself.

This DIY Paleo mayo gives you a full cup in just about 15 minutes. It’s a great option for egg salad.

Also, if you’re missing bread with your egg salad, this gluten-free Paleo option should work!

So many people start Paleo and then fret that they can’t rely on sandwiches for lunch anymore. Sandwiches are indeed a handy lunch food. They travel well, are easy to eat, and don’t require utensils.

While of course you can just whip up some Paleo bread to make sandwiches, it’s nice to eat outside the loaf sometimes.

I’ve assembled a list of my very favorite lunch ideas. You’ll find some sandwiches, but you’ll also find a variety of other unique ideas for the next time you need a mid-day meal.

Check it out, and let me know what you’re having for lunch!

A delicious and satisfying salad that can be made ahead of time and stored in the fridge.