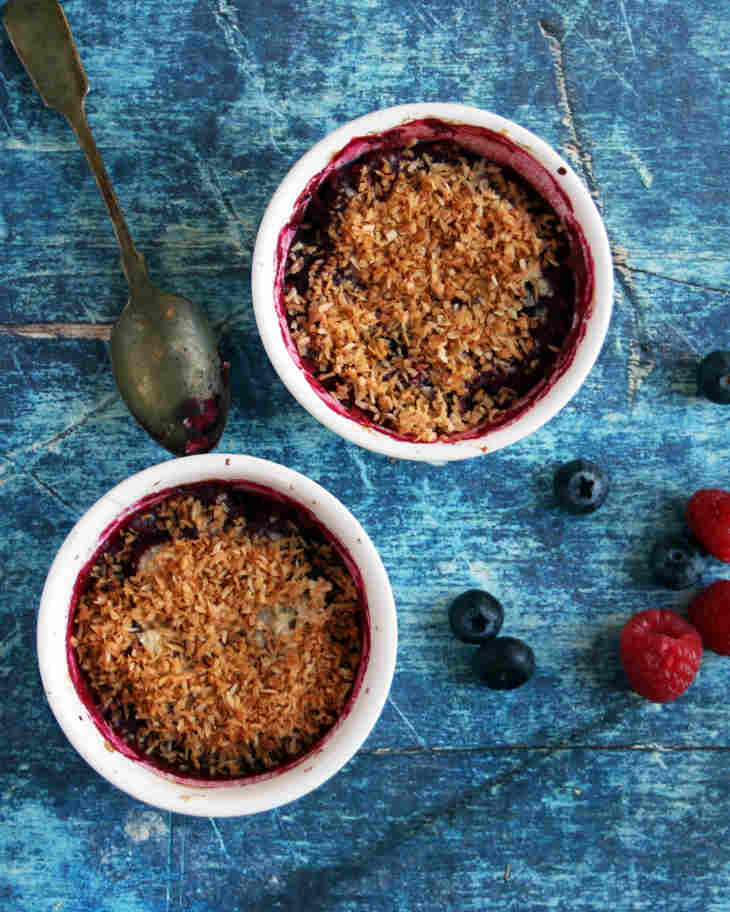 Portion control is no problem with this Paleo mini mixed berry crumbles recipe. Make it anytime you’re in the mood for a subtle sweet treat.

Spoiler: Just because something features berries doesn’t mean it’s Paleo. In fact, you’d be hard pressed to find a traditional berry crumble recipe that works for your diet.

The “crumble” portion of this recipe is typically constructed with white flour. Since that’s not part of Paleo eating, I swapped it out for almond flour.

Nut-based almond flour is dense, but delicious. It often needs to be mixed with coconut flour for baking, but it’s fine on its own for this recipe.

There’s no need to make your dessert sickly sweet. Recipes like this one help to retrain your taste buds to appreciate the natural sweetness present in fruit.

While sugar doesn’t have any redeeming qualities, fruit offers sweetness and nutrition.

Another swap I recommend is using coconut oil instead of butter. You need something to bind the flour together and make a crumble, but it doesn’t have to contain dairy. Coconut oil offers the perfect stickiness to get the job done.

Finally, I improve on the texture of this dish by adding some desiccated coconut.

What is Desiccated Coconut?

The strange name is actually referring to unsweetened dried coconut. It differs from coconut flour because desiccated coconut retains its fat, but loses its moisture.

Even though ideally you’ll purchase the unsweetened variety of desiccated coconut, you’ll still get a hint of that oh-so-important natural sweetness. Companies are beginning to offer sweetened versions too, so make sure you purchase the correct one.

You might be able to find desiccated coconut in a variety of sizes, ranging from flakes to powder. For this recipe, I’d recommend fairly coarse chunks or shredded bits.

With the number of diets out there these days, it’s no wonder people confuse the various weight-loss tactics. If you’re going to follow a particular diet, however, you should probably know the rules.

Technically, Paleo is a gluten-free diet. We avoid grains on Paleo, therefore there is no gluten involved.

The reverse is not true, however. People adhering to gluten-free diets typically only avoid gluten. Their substitutes for gluten often include other grains, such as rice.

While people on a strict gluten-free diet typically have an eagle eye for gluten, most of them aren’t avoiding sugar, vegetable oils, or dairy.

Check out this article on Paleo versus Gluten-free for a more in-depth look at the difference between these two popular diets.

Enjoy the sweetness and tartness of this berry crumble in individual portions.