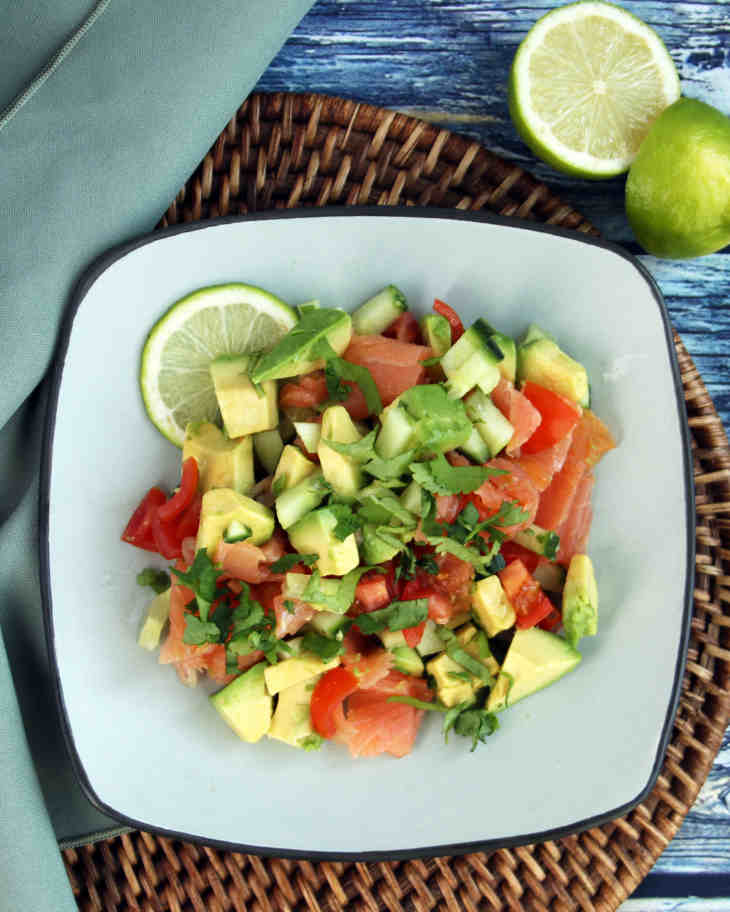 Nothing beats ceviche for a fresh, light summer meal. It fills you up without weighing you down, and it looks beautiful too.

But there can be some downsides to traditional ceviche.

Normally, ceviche is prepared using fresh raw fish that is cured with citrus juice. The raw fish component opens the door to potential food safety concerns, although if properly prepared it is generally safe.

That said, not everyone has easy access to fresh fish, making this dish out of the reach of many. At least until now. There’s no reason you can’t enjoy ceviche using cooked fish.

How I Made it Happen

First, I swapped raw fish for smoked salmon. The added bonus of this is that you don’t have to take the time to cure the fish in lime juice.

To make it Paleo, I did not include any corn or tortilla chips, although you could make some of these tortillas if you like. They’re Keto and Paleo.

These standard ceviche staples will give this dish that lovely fresh flavor that we all know and love.

It also opens the door to a new dish for those who may be squeamish about eating raw fish.

How To Serve Ceviche

I think this recipe is really versatile in that you can make it into a light meal or serve it as a snack or appetizer.

It’s a solid lunch that doesn’t involve heat of any kind, making it ideal for steamy summer days.

You could also make this as a fancy appetizer for your next party. Make sure that you make enough! Once people try it, they usually come back for more.

Another idea is to make this as an appetizer. I don’t do this often, but sometimes it’s nice to have something to munch on while you’re getting a big or time consuming dinner together.

Panicked about what to prepare for your next party? Look no further than my very favorite Paleo appetizers.

There’s everything you could imagine to please your guests, from bacon-wrapped dates stuffed with cashew cheese to sticky wings to coconut shrimp and more!

You’ll even find a link to an incredible 45 Paleo bacon recipes!