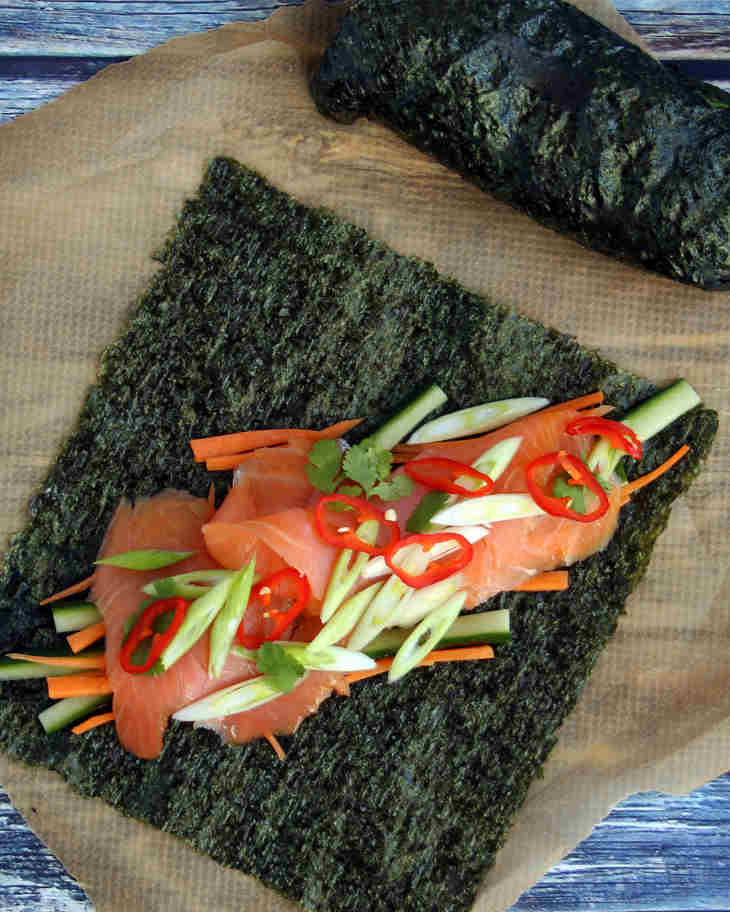 If I’m going to put effort into making lunch, it had better be substantial. Nothing is worse than slicing, dicing, and chopping your way to lunch only to get hungry an hour after you’ve eaten. This Paleo spicy nori wraps recipe will leave you feeling satisfied.

Myths and Misconceptions About Paleo

I don’t know if they’re myths and misconceptions or just plain excuses, but I’d like people to realize that Paleo doesn’t have to be hard.

Anything can be difficult if you make it that way, but there are plenty of easy, simple Paleo meals and snacks that are ready to become part of your new way of eating. So let’s tackle the first myth.

Like anything in life, in the beginning, you have to learn the rules. So yes, initially you’ll have to put some thought into what you’re putting into your mouth.

That’s a really good thing because so many people eat while multitasking and don’t even take time to think about or taste their food. Being aware of what your eating and thinking about it will help you slow down, enjoy your food more, and probably eat a heck of a lot less.

When you learn the ropes and know automatically what’s Paleo, shopping and cooking are a breeze.

Paleo doesn’t have to be expensive. You don’t have to go to the “health-food” grocery store or buy everything organic if that’s not in your budget.

You can also look for recipes with common ingredients. These nori wraps have some pretty standard stuff, like cucumber, carrot, and green onion. If you aren’t familiar with nori (aka the green stuff that holds sushi together), it can be purchased very inexpensively.

Sure, some recipes call for pricey cuts of beef or expensive fancy flours, but you don’t have to make those things. There are plenty of budget-friendly options available.

Myth #3: Paleo is all Salad and Sadness

As this recipe proves, there are tons of interesting, flavorful recipes for Paleo that don’t involve salad.

You have a lot of options available for you on Paleo, ranging from pasta substitutes to seafood to baked goods and more. There are plenty of ways to make just about anything Paleo.

Although you also shouldn’t shy away from a healthy salad!

It’d be awfully hard to stick with a diet that doesn’t allow for occasional treats. There are all kinds of recipes for Paleo desserts out there.

The recipes can show you clever ways to avoid grain and excess sugar in your baking projects.

This Paleo spicy nori wraps recipe is a perfect example of how you can enjoy a filling, flavorful meal on Paleo. But there are so many others out there for you to try.

Take a look at this page full of my favorite Paleo recipes. It is indexed by category, making it super convenient to find just what you’re looking for!

Quick and easy lunch idea with an extra kick.