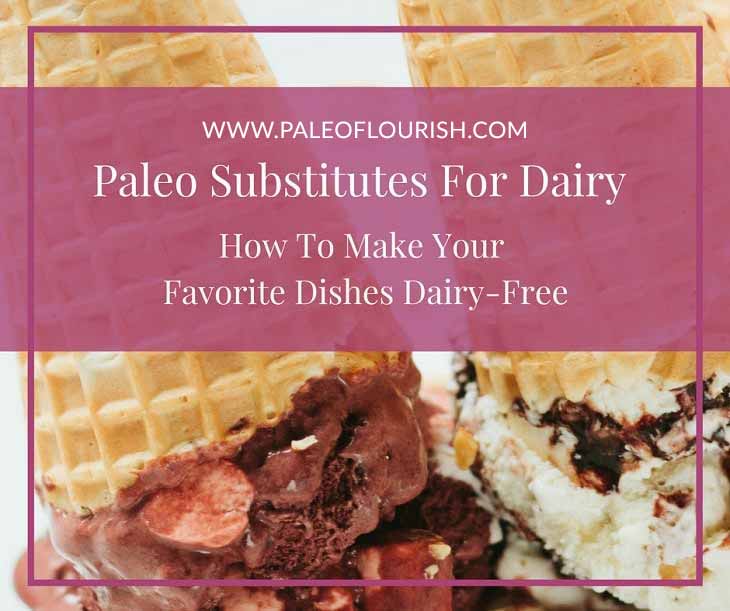 Getting used to a dairy-free diet can be tough –

Most of our favorite recipes contain dairy…

But going dairy-free can significantly improve your health, clearing up digestive issues and getting rid of troublesome acne. And it’s a key part of the Paleo diet.

Don’t despair, though.This article will share the best substitutes for milk, cheese, butter, yogurt, and even ice cream. We’ll even link to some delicious recipes using these substitutes, so you can test it out yourself.

But first: why would you avoid dairy on Paleo in the first place?

It’s true that dairy is very nutrient-dense and can be super healthy for you, but most forms of dairy we consume nowadays doesn’t fall into that category.

Here are 3 quick reasons you should avoid dairy…

1) Most dairy products are highly processed

While raw dairy still contains many of the enzymes and nutrients in its original form, most dairy we buy at the supermarket is highly processed.

It’s pasteurized – killing off the enzymes that can help us digest it.

And it’s homogenized – which means the fat molecules in dairy products have been changed.

Many processed dairy products also contain preservatives, flavorings, and traces of hormones and antibiotics, all of which could impact your health long-term.

In particular, cheese is really easy to overeat.

It’s easiest to avoid this problem by cutting dairy out of your diet completely.

And if one of the reasons you started Paleo was to lose weight, you’ll find doing this can help you break through weight loss plateaus and reach your goal weight faster.

3) Many folks are unaware dairy is causing their health problems

If you’ve been eating dairy products and drinking milk all your life, you might still be sensitive to dairy.

How do you tell? A good indication is struggling with acne, sinus problems, digestive issues, bloating, joint pain, arthritis, or inflammation.

By cutting dairy out of your diet, you could clear up these long-standing health problems.

And if you want more information on why dairy can damage your health, then read our article to learn more.

Butter is in almost every recipe.

If you’re baking sweet pastries, then you need butter.

If you’re melting garlic sauce on top of a juicy steak, then you need butter.

Thankfully there are alternatives! 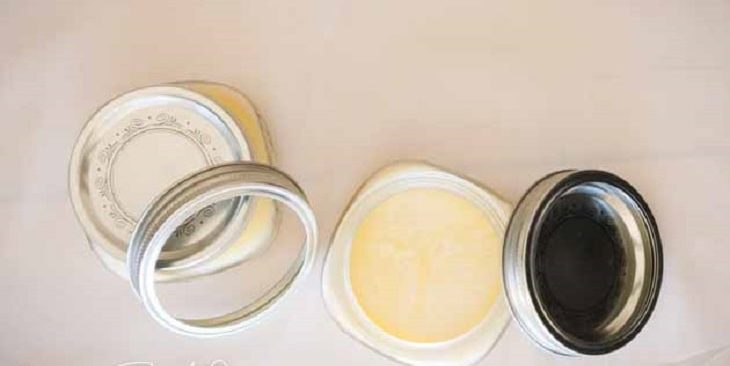 1. Paleo Ingredient Swaps: Use ghee instead of butter

Ghee is the best substitute to use when you want to roast vegetables, add to your coffee in the morning, drizzle on steaks, add on top of yummy paleo pancakes, or to even bake cookies with.

It’s a type of clarified butter which makes it:
a) one of the few types of healthy dairy you can eat on Paleo
b) a rich fully-flavored substitute for butter, with a similar but more intense taste

Why is ghee healthy?
Because ghee is made by heating butter and removing the milk solids it contains 99.7% fat and often contains a lot of vitamins A, D and K2.

Because the milk solids are removed, most people with lactose or casein intolerances can enjoy ghee without any health issues.

You can buy ghee online and in most grocery stores. Or if you’re really feeling up to it you can make ghee yourself!

Recipes for making your own ghee at home:
Flavored Ghee Infusions – Three Ways
How to Make Ghee in a Slow Cooker

2. Paleo Ingredient Swaps: Use lard for baking savory recipes instead of butter

Lard is great for making biscuits and low-carb rolls/pie-crusts.

One thing to note is that you may still get a little pork flavor if you use leaf lard – that’s why most people use lard for savory recipes or use ghee instead.

3. Paleo Ingredient Swaps: Use coconut oil instead of butter

While you won’t get that same buttery flavor, coconut oil can be a great option for cooking steaks, eggs, and vegetables in as well as using to bake with instead of butter. 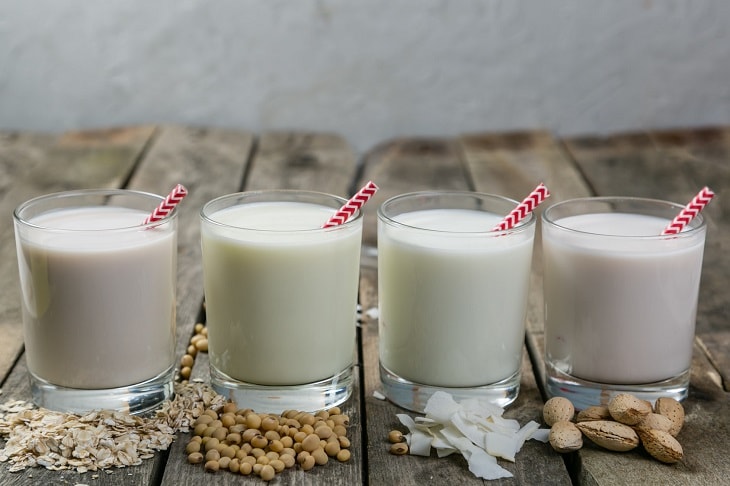 Milk is probably the easiest dairy product to substitute. There are a ton of different options to choose from.

1. Paleo Ingredient Swaps: Use coconut milk instead of regular milk

Coconut milk is a creamy and delicious replacement for milk. Ghee is great for making crustless quiches, preparing chia puddings, or even indulging in low-carb desserts.

2. Paleo Ingredient Swaps: Use coconut cream instead of regular cream

Coconut cream is essentially the thicker and richer variation of coconut milk. Instead of using heavy whipping cream or creamer, you can add some coconut cream to your coffee. You can use it as a substitute for any recipes that call for heavy cream.

One thing to note:

Make sure the coconut milk from the store doesn’t have preservatives, additives or emulsifiers (guar gum is a common emulsifier).

3. Paleo Ingredient Swaps: Use nut-based milks instead of regular milk

No matter which substitute you go with, they’re all great for using in cake and pastry recipes, adding as a creamer to your morning coffee, or using in smoothies.

Warning: unfortunately most nut milk alternatives you can find at grocery stores have loads of added sugars, unhealthy preservatives and flavorings, and some even have artificial colorings and other nasty additives.

So read labels very carefully if you’re going to buy nut milk from the store.

There is another option: you can make nut-based milks at home. That way you’re 100% sure they don’t have additives. Plus it’s easier than you think!

But there are some milk substitutes you’ll want to avoid!

Soy is unhealthy, so even though it’s low-carb you’ll want to exclude it from your diet. Check out this article that explains in detail why soy milk is best avoided on Paleo.

Rice milk is usually made from white rice and oat milk is made from oats, so they’re usually higher in carbs and may not be gluten-free!

As surprising as it might sound, non-dairy substitutes for cheese do exist – so you can still enjoy cheesy dips, casseroles and spreads.

1. Paleo Ingredient Swaps: Use nutritional yeast instead of regular cheese

Nutritional yeast comes in two ways: as flakes or in a powder form.

It’s perfect for sprinkling on veggies, mixing into “cheesy” scrambled eggs, or stirring into your soups.

Nutritional yeast is catching on, so it’s quite easy to find in grocery stores or online. But as always, make sure to read the labels and check ingredients – choose a brand that’s gluten free!

2. Paleo Ingredient Swaps: Use cashew “cheese” instead of regular cheese

For spreads and melted cheese, cashews or other nuts (like almonds) are fantastic options. You’ll even get that stringy texture!

Just be aware that eating too much of a nut-based cheese isn’t healthy. And the carbs add up!

3. Paleo Ingredient Swaps: Use vegetable “cheese” instead of regular cheese

If you’re after a cheesy texture as well as a cheesy flavor, then vegetable-based cheese is another great option for you. They’re often slice-able, spreadable and they melt just like real cheese!

You’ll find recipes to make these types of “cheese” are simple and straightforward to follow. They usually involve either zucchini or cauliflower. Plus herbs, spices and sometimes nutritional yeast for flavor. 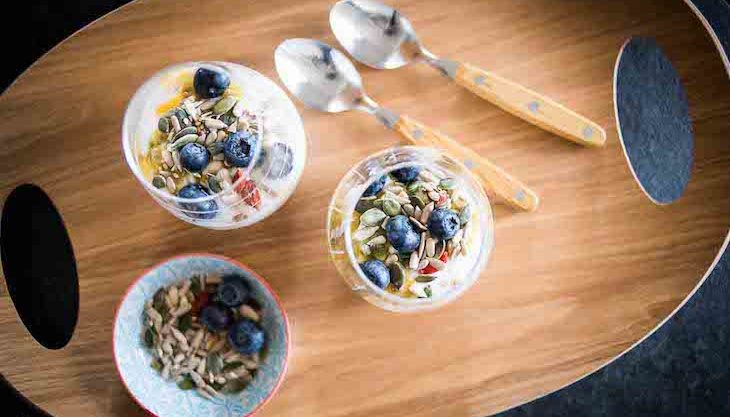 Yogurt is actually one of the simplest things to find a dairy-free alternative for! (And we’re NOT talking about soy yogurts, which you should try to avoid just like soy milk).

1. Paleo Ingredient Swaps: Use coconut yogurt instead of regular yogurt

It’s creamy, delicious and full of probiotics which keep your gut healthy (if you choose a recipe which involves fermentation).

You’ll also find it a useful substitute for recipes which involve sour cream and creme fraiche.

2. Paleo Ingredient Swaps: Use yogurt made from nut-based milks instead of regular yogurt

Not everyone is a fan of coconut! But luckily you can pick your favorite nut-based milk and use that as the base for your homemade yogurt.

Whether it’s cashew, almond or the less-common pistachio you can turn any other nut-based milk into yogurt, too.

This is the most exciting one and I’m sure you’ve been anxiously waiting: how to make Paleo-friendly ice cream!

Even though everyone wants to improve their health, not many people want to give up ice cream… (me included!)

1. Paleo Ingredient Swaps: Use coconut cream or almond milk as your ice cream base…

You have plenty of milk options to use when making your ice cream. You’ve got almond milk, coconut milk, cashew milk, and more.

Not only is making ice cream at home fun, but you are in total control of which ingredients you use.

That way, you’ll make sure to avoid artificial colors, unhealthy flavorings, or any hidden sweeteners.

Instead, you can use dark chocolate, honey, berries and fruits to flavor your ice cream. But do try and save it just for special occasions so you don’t eat it every day.

And if you’re after more ice cream recipes, you can check out our roundup of Paleo ice-cream recipes here.