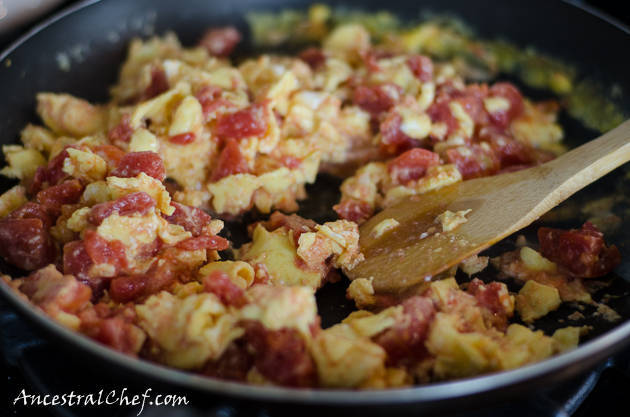 “Your Mum is an Awful Cook!”
Ok, my aunt didn’t literally say those words, but she did give me a very funny look when I told her how much I love my mum’s cooking. My aunt then proceeded to tell me how my mum couldn’t cook anything when she was growing up (she was the youngest of 4 kids) but that she was great at dressmaking.

Somehow, I think 30 years of cooking three meals a day for my dad daily changed things.

This post is coming a bit late for Mother’s Day, but I have to say that I LOVE MY MUM’s COOKING.

This tomato and egg scramble happens to be a dish that I’ve seen her make countless times (it’s typically done as a stir-fry with some green onions and soy sauce), but I thought it would make a great Paleo brunch dish if I omitted the soy sauce and add in some parsley instead.

I also made it a bit easier (because I’m lazy!) by using canned diced tomatoes (it tastes much better with fresh tomatoes).

There are 2 slightly different ways of making this dish (you can either cook the scrambled eggs first, and then add in the tomatoes, or you can add in the tomatoes first and then the eggs). I think there’s quite a bit of difference in the two methods (the taste is different), so I’ll go through them separately.

With this method, I started by whisking the eggs well. Then I added 2 tablespoons of coconut oil into a skillet on medium heat and poured the whisked eggs in. 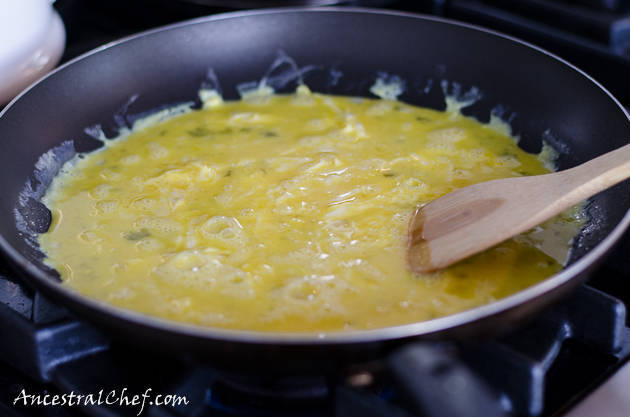 Keep scraping the bottom of the skillet with a wooden spatula. You’ll get scrambled eggs. When the eggs are nearly done (still soft but not liquidy anymore), add in the tomatoes. 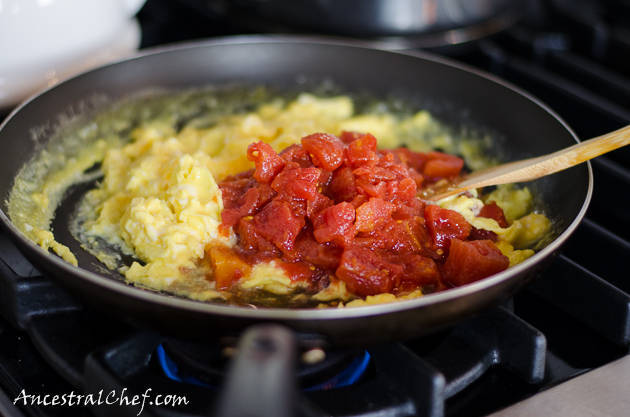 Stir the mixture and add in salt.

Cook for around 2-3 minutes until the eggs are solid and have absorbed some of the tomato juices. You’ll end up with larger pieces of eggs than method 2, and it’ll taste more like a regular scramble but with a sweeter tomato flavor. 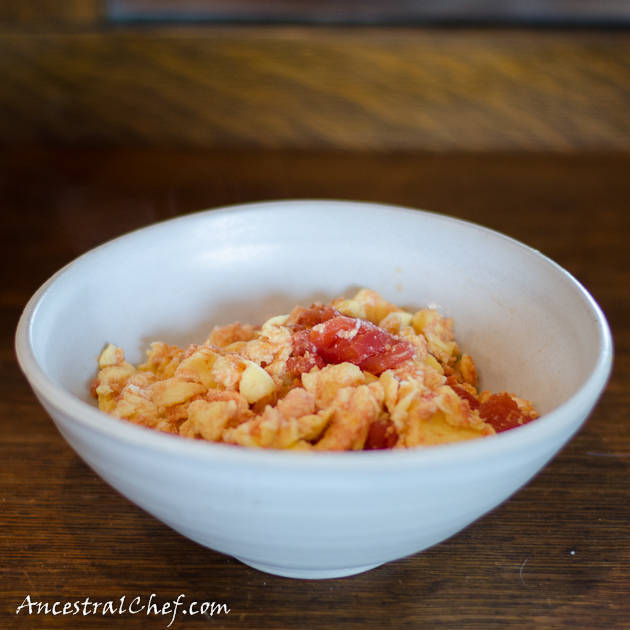 With this method, I started with just heating up the can of diced tomatoes (I took out most of the liquid from the can). 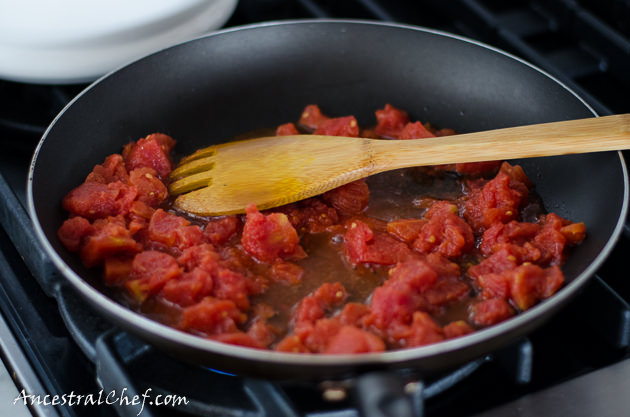 I whisked some eggs and put them in with the tomatoes. 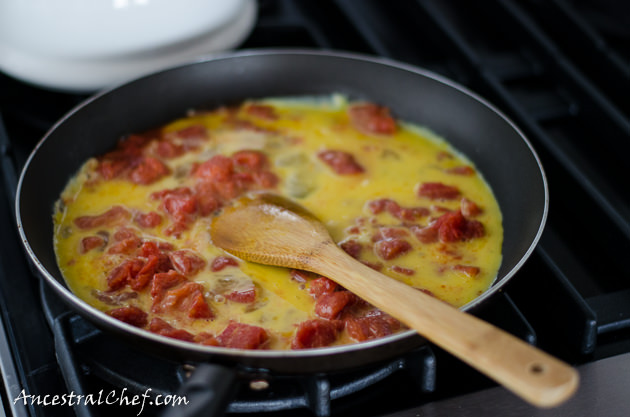 Then just scramble away on a medium heat (make sure it doesn’t get stuck on the bottom too much). 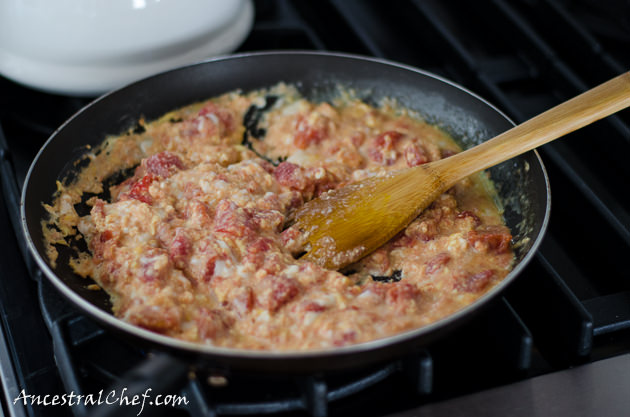 Then add a little bit of chopped parsley (finely chopped is better). 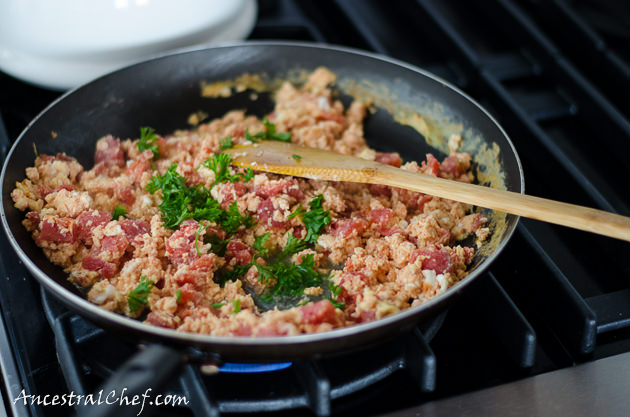 This method effectively boils the egg in the water from the tomatoes. The egg pieces are smaller here and a bit grittier because the egg didn’t clump together. However, the tomato flavor permeates more into the eggs. 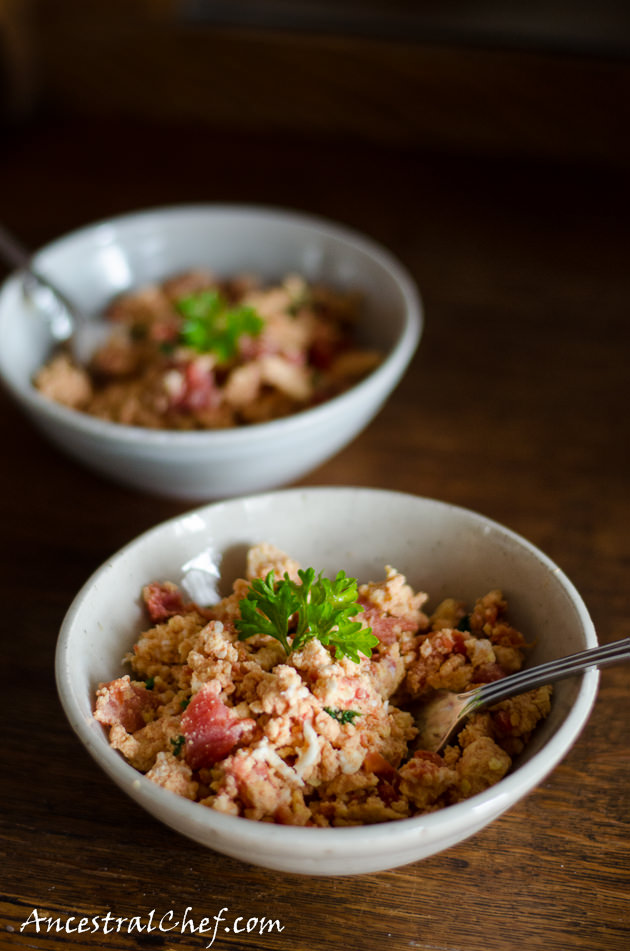 Which Method is Best?

I personally prefer Method 1, but you can do either! Try it out and see which one you prefer.

I hope you will share your recipe on my Foodie Friday Blog Hop at A Room for Two with a View. I know my readers will love it!

Have a fantastic Foodie Friday and a wonderful weekend!

Melissa
A Room for Two with a View