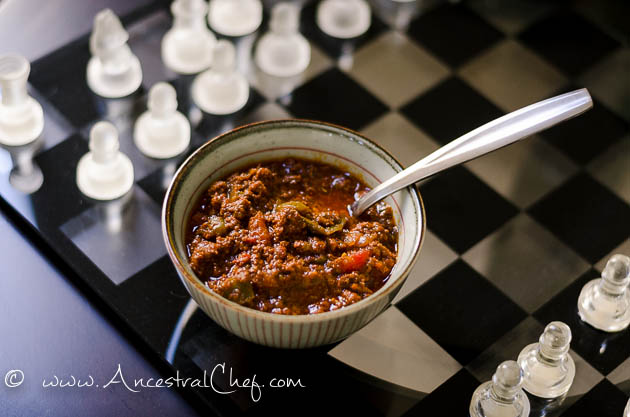 I’ve been making this chili forever now, and it’s about high time I shared it with everyone. I like to tweak the recipe a little each time I make it, and this is the raspberry liver variation. And the best part is that everything just goes into the crockpot, and 8 hours later it’s delicious! I like to make a large batch to eat for several days, but you can of course scale the recipe down (also make sure your crockpot can hold so much meat – I use this 6-quart one from Amazon).

I start by putting the cans of diced tomatoes (you can use fresh ones of course!) and the tomato paste into the crockpot. 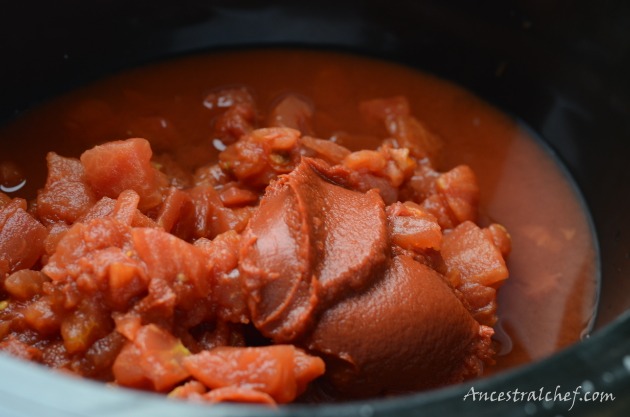 Then I add in all the veggies (there’s some diced Italian squash shown in this photo) and the raspberries. 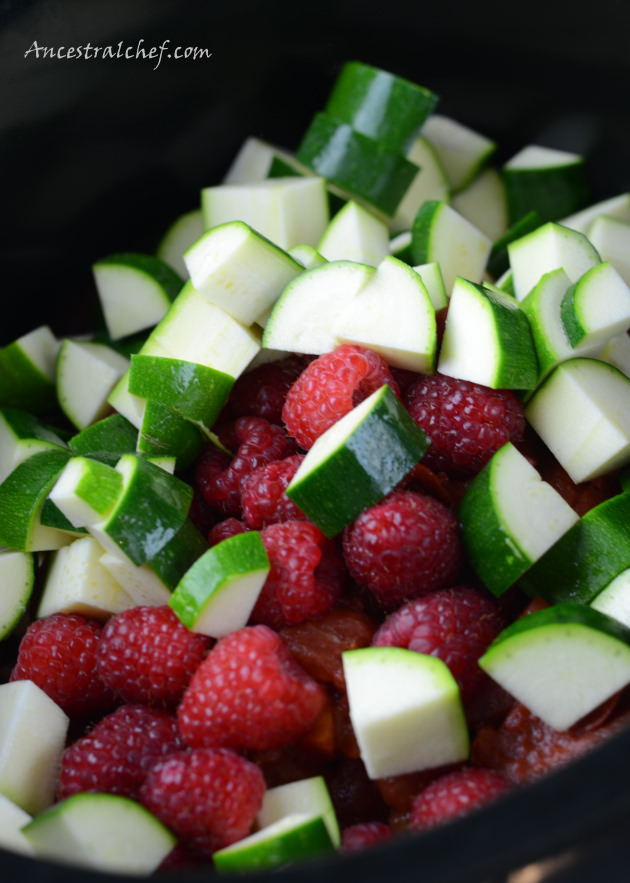 Here’s some diced orange peppers too. 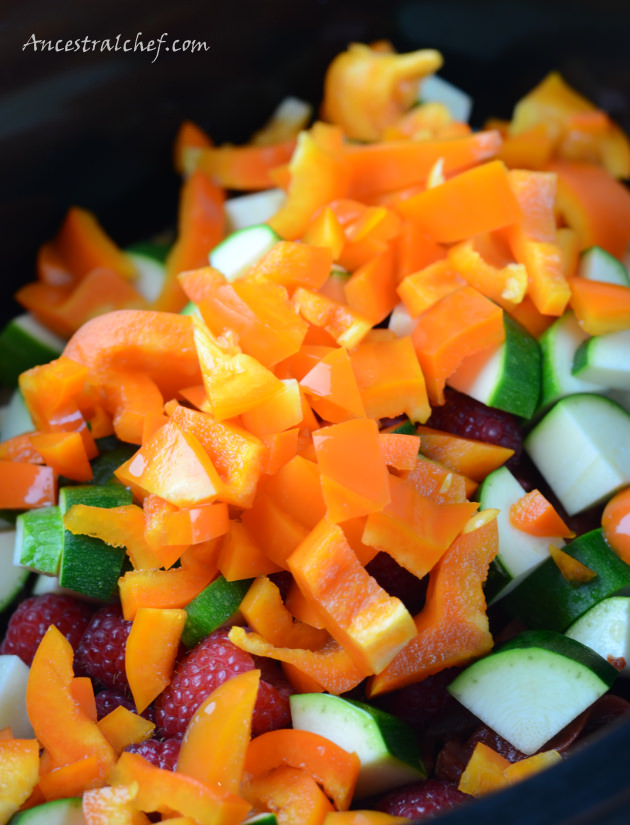 Then add the liver, ground grassfed beef, and all the great spices in and mix well. 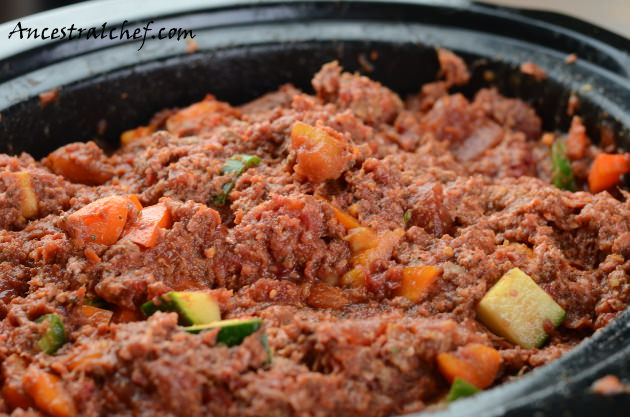 Cook in the crockpot on the low setting for 8 hours. The raspberry flavor isn’t intense, but it does add a bit of subtlety, and the raspberries will have disappeared (the seeds are still there). The herbs and spices and the vegetables all add great flavors, which drown out the taste of liver quite a bit. So it’s another great way of sneaking in highly nutritious liver without spoiling any enjoyment! Enjoy by itself or with some Paleo bread (super simple recipe here). Print out the entire recipe below and let me know what you think in the comments!
Print

Question with the liver. Do you grind it up or just chop it into small pieces? I know if liver is cooked well done it can be tough, do the small chunks get tough in the crock pot or does slow cooking prevent this.

I put it through the food processor – you don’t really notice the liver bits because they’re pretty small and blend in.

Do you brown the beef and liver before putting them in the crockpot?

Hi Maggie – I don’t brown the beef or liver. I just add everything raw into the crockpot. I’ve experimented before with browning the meat first and have not found it to be that helpful. I wrote an article about this here: https://paleoflourish.com/why-sear-meat-before-cooking/

Exactly what kind of chili peppers do you use?

This sounds wonderful! I would never have thought about adding raspberries to chili, but I’ll bet it’s good. Do you think I could use deer meat instead of the liver? I would eat it with liver, but the hubs doesn’t care for liver one bit….thanks for the recipes..and looking forward to see what’s on your menu tomorrow.

Yes, you can use any meat in it – if you put less liver in, your husband won’t even notice it. The liver adds lots of extra nutrients that muscle meat doesn’t contain.

This was delicious. I scaled it back and cheated by using a blend of liver, heart and ground beef that my local farmer sells and it was the perfect way to sneak some liver in there!

Hello, what liver do you use, i.e. lambs; pigs or chicken? We get all here in the UK and I wondered which you prefer to use in this recipe? Thanks for your help.

Hi Helen – I typically use beef liver actually. I wasn’t too big on the taste of lamb liver when I tried it in chilli, but I think pigs or chicken would work fine too.

Thanks for your answer Louise!

This looks really good! I bought all the ingredients- but I couldn’t find fresh raspberries, so I bought a bag of frozen instead. If I use frozen raspberries, do I need to cut back on the liquid from the diced tomatoes? Thanks so much for your website- it’s been a huge help to getting me more comfortable w/Paleo 🙂

Hi Liz – I might only put half the amount of raspberries in (for fear of excess liquid).