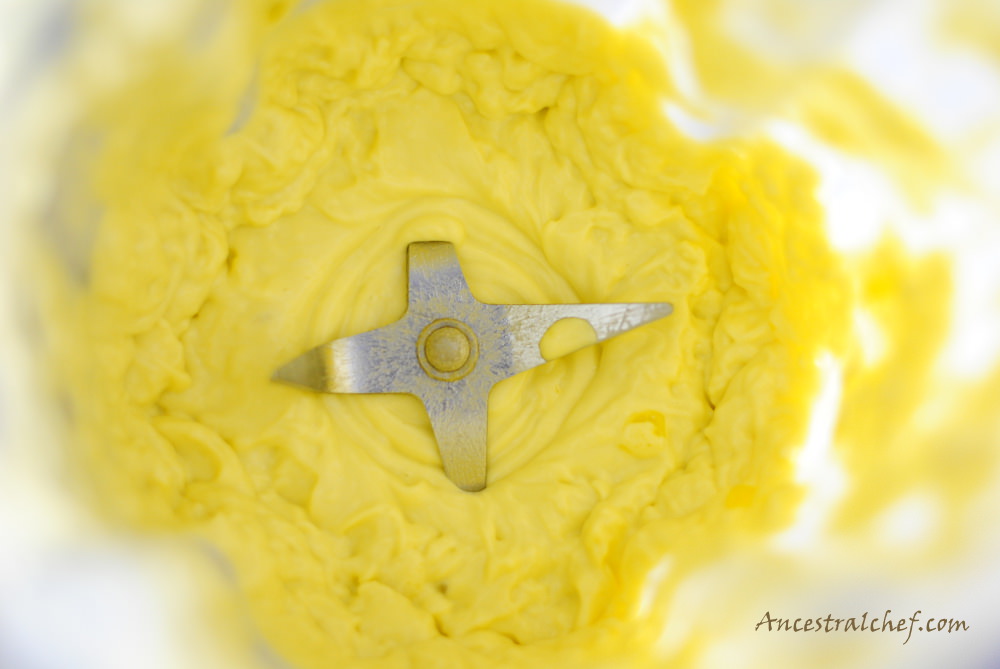 I used egg yolks instead of whole eggs so that the mayo would be less runny.  You can separate out the yolk from the white by simply tapping the long-side of the egg gently on the table until it cracks slightly, then pulling the shells apart into two equal halves.  I then shift the egg yolk from one half shell to the other while letting the egg white flow into a bowl below.  I used 2 egg yolks, which produced about 1 cup of mayo. 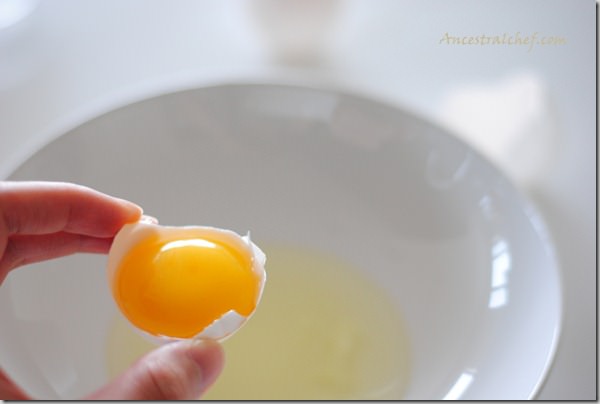 Then juice a lemon. 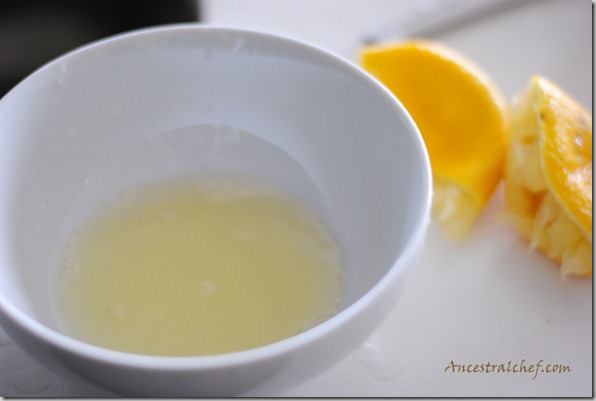 Place 2 tablespoons of lemon juice along with the 2 egg yolks into a blender or food processor (or using an electric whisk). 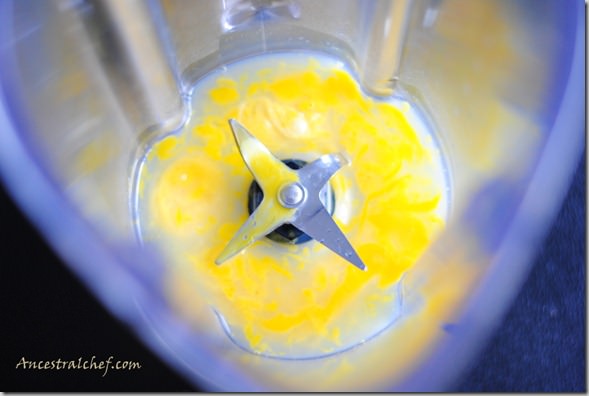 What did I do with the leftover egg whites?  I fried it in some coconut oil along with another egg and seasoned it with salt and some delicious smoked Spanish paprika!  It was amazing!! 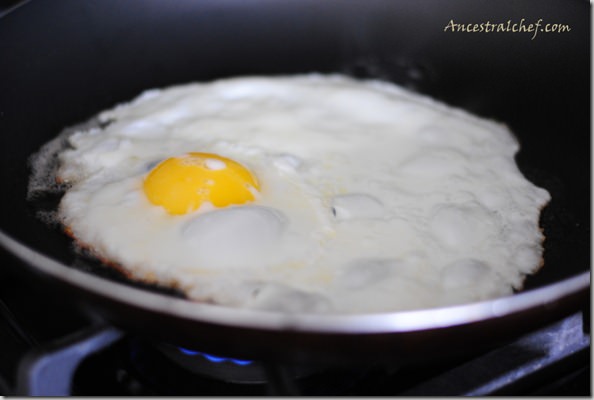 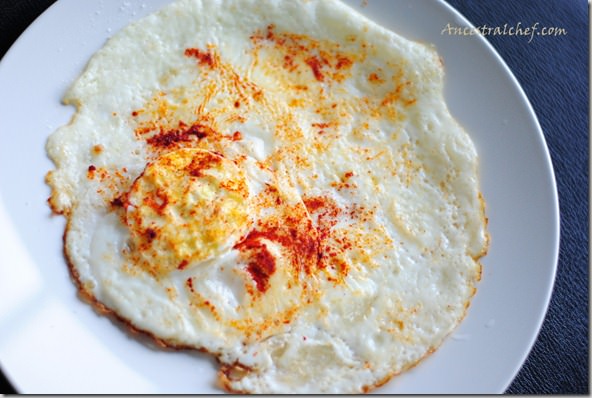 But going back to the mayo…blend/food process/whisk the egg yolks and lemon juice until frothy. 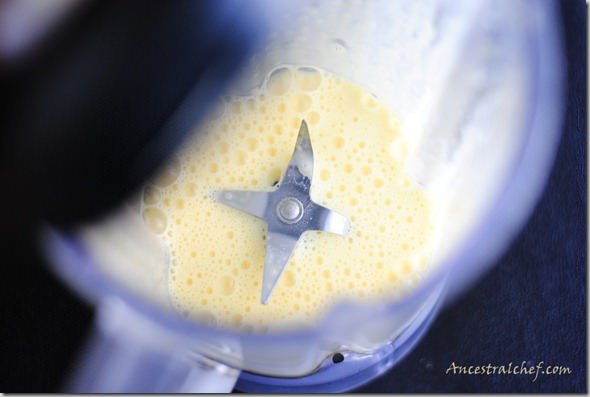 Then we come to the hardest part.  You have to drizzle your olive or coconut oil in slowly.  I put the blender onto the lowest setting and poured in half a tablespoon of oil at a time through the hole at the top of the blender.  Note that it is a bit messy as bits of liquid splashes out occasionally.  This process is very essential, even though it’s a bit time consuming (a few minutes).  The egg and the oil have to combine slowly to form the thick texture we associate with mayo.  After I had put in around 3/4 cup of oil, the consistency of the mixture changed and suddenly the blender didn’t seem to blend well anymore!   That was because, the texture suddenly changed from an oily goop to a thick cream. 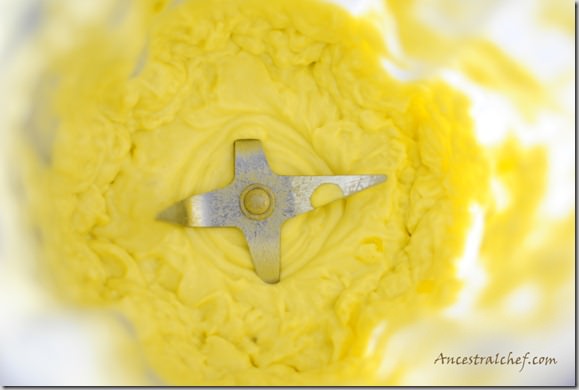 This is how the mayo looks if it didn’t work….it’s one big oily mess. 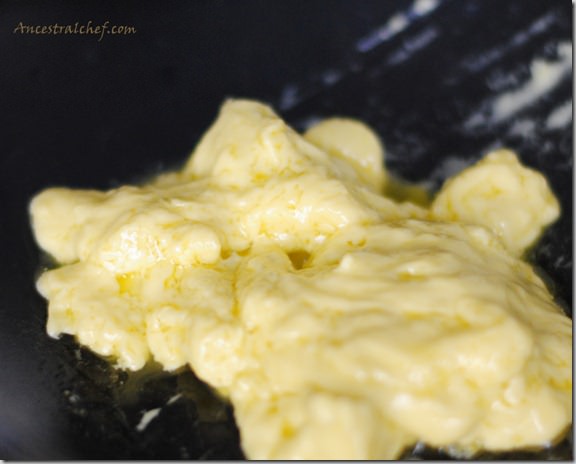 I used the mayo to make a large bowl of tuna salad. 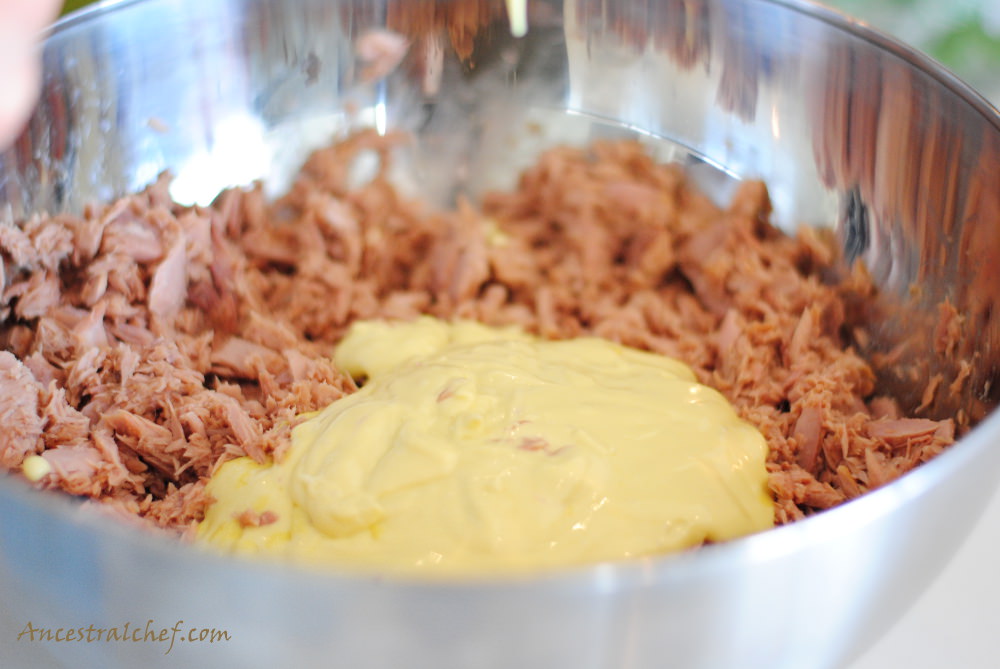 If you want to buy ready-made Paleo mayo

If you want to buy a ready-made Paleo mayo instead of making your own, then try this Paleo Mayo sold on Thrive Market online or you can buy this avocado Paleo mayo directly from Mark Sisson’s website.

how long can the mayo be stored in the refrigerator?

Usually 1-2 weeks if you use fresh eggs and store it in a jar with a lid.

The easiest and quickest way to make mayonnaise is by putting all ingredients into a jar or container wide enough for a stick blender and then blend until the mayo starts to emulsify and then move the blender up and down until it’s all emulsified. Works every time. =)

I added all three ingredients at the same time in my food processor and the mayo is runny. Is there anything I can do to make it thicker?

You’ll have to add in the oil a little at a time because you’re effectively trying to mix water and oil and they don’t mix together well. The egg yolk contains an ingredient that helps them to combine together, but it requires you to add the oil in slowly. http://en.wikipedia.org/wiki/Emulsion