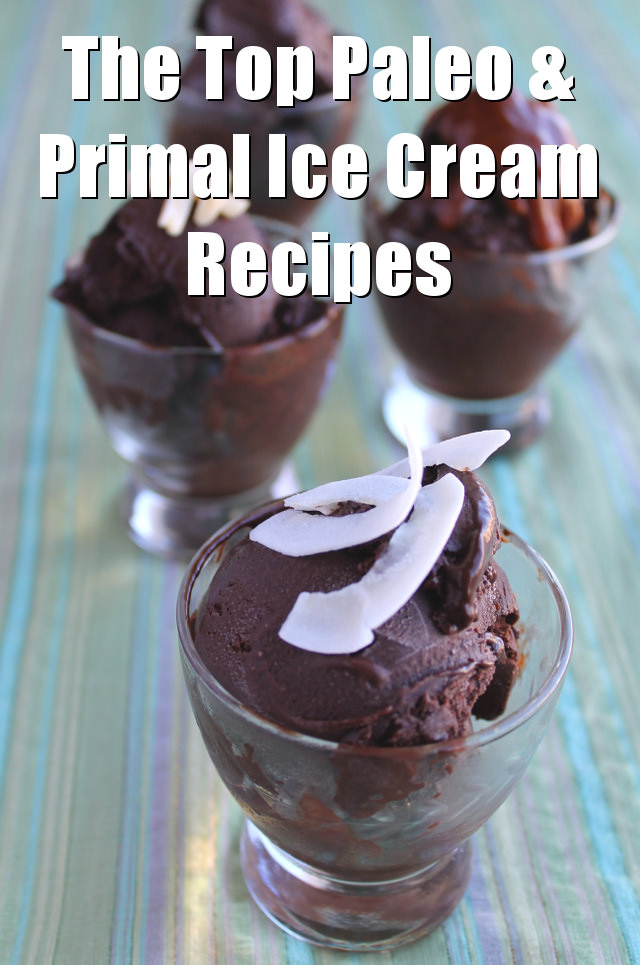 Giving up ice cream when I went Paleo was tough, but dairy simply didn’t make me feel good. And so ice cream had to go…or so I thought at first.

What I didn’t realize back then were all the amazing Paleo ice cream recipes I could make at home and enjoy without feeling ill afterwards.


So, what do Paleo ice cream recipes contain if it doesn’t contain dairy?

The most popular “creamers” for Paleo ice cream recipes are coconut milk or coconut cream and bananas. Avocados, soaked cashews, and egg yolks are some other options. Personally, I really love the Paleo ice cream recipes with bananas in them – they’re really easy and fast to make, and taste delicious (you often don’t even need to add any additional sweeteners!).

Can I eat Paleo Ice Cream Every Day?

Like all Paleo desserts, I personally don’t think they should be eaten every day (most of these Paleo ice cream recipes still contain pretty high amounts of sugars, even if they’re not refined sugars!).

So, when should you make Paleo ice cream recipes? These delicious recipes are perfect for those really bad days when you really want to cheat or for when you want to make something for a special occasion or treat. Or if you’re a huge ice cream fanatic and don’t think you could become full Paleo because of your ice cream addiction, then try switching to Paleo ice cream and gradually reducing the amount you eat of it.

What’s in this giant list of ice cream recipes?

There are quite a lot of recipes here, so I’ve grouped them into different categories to help you search for the one that you want to make.

And in case you’re wondering, I didn’t get to taste test all 66 of these ice cream recipes!

Just like the list of top Paleo cake recipes I created a few months ago, it was really really difficult to pick just 3 recipes to highlight. So, I decided to go for 3 very different recipes – a chocolate recipe, a nut recipe, and a fruity paleo-autoimmune-friendly recipe.

My favorite flavor of ice cream used to be strawberry, but now it’s most definitely chocolate. And this paleo chocolate ice cream recipe is AMAZING! 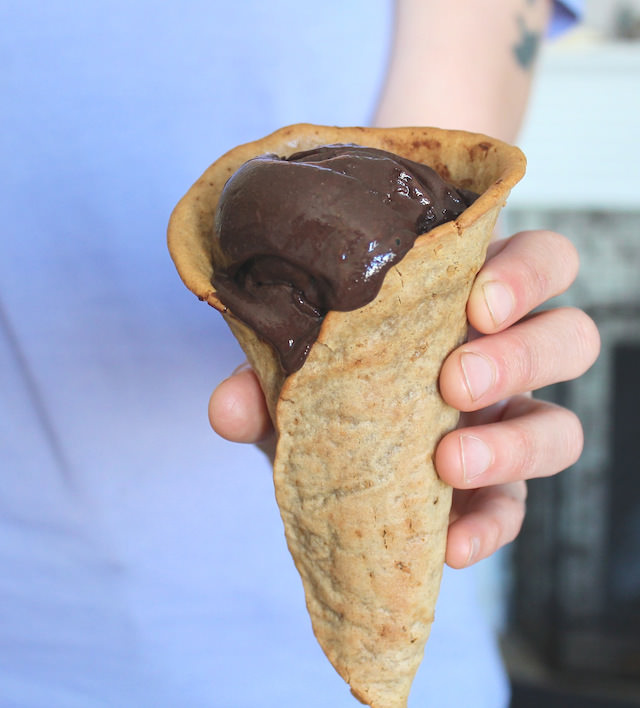 If you’re not familiar with the talented Simone from zenbellycatering.com, then you are seriously missing out. She’s a superb Paleo chef based in San Francisco, California, and she has catered tons of Paleo events. Plus, she’s about to come out with her Zenbelly Cookbook. Both the photo at the top of this post and the photo just above are of this delicious Paleo ice cream recipe (and both photos were provided by Simone). This recipe is special in many ways – it’s got soaked cashews as well as egg yolks, both of which help to give this Paleo ice cream a seriously creamy texture. But my favorite ingredient is the cognac in it (2 tablespoons in a quart of ice cream). This is definitely a Paleo ice cream recipe you have got to try! 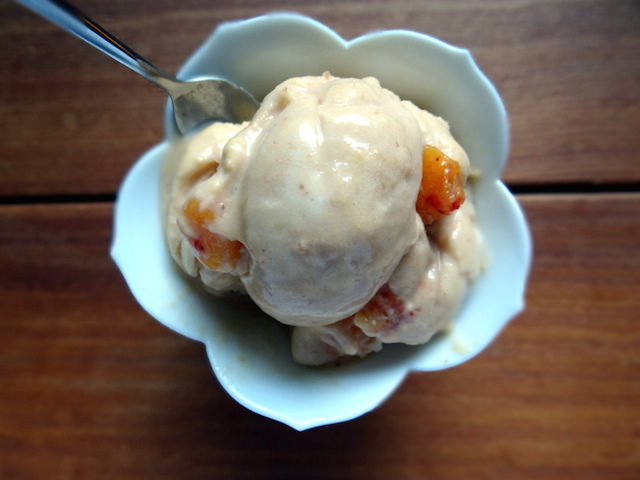 Many of you are asking for Paleo-autoimmune (AIP) recipes (if you’re not sure what AIP is, then read this article), and so I was really happy to see this fantastic AIP ice cream recipe from Eileen at Phoenix Helix. She blogs extensively about AIP recipes and issues as well as her own amazing story of how she used AIP to reduce her rheumatoid arthritis symptoms. Coconut oil, coconut milk, and gelatin help to make this recipe both creamy and super nutritious! The peaches are blended into the ice cream to give it an amazing flavor, and there are chunks of it in the ice cream itself (see the photo above, which was provided by Eileen)! This is definitely a really fruity and refreshing Paleo ice cream recipe!

Did you know that I have 4 Paleo Ice Cream Recipes? If not, then you should check them out!! 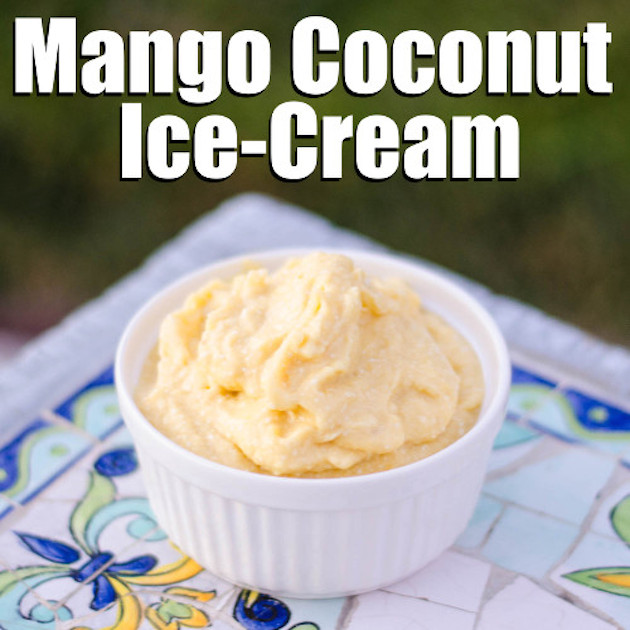 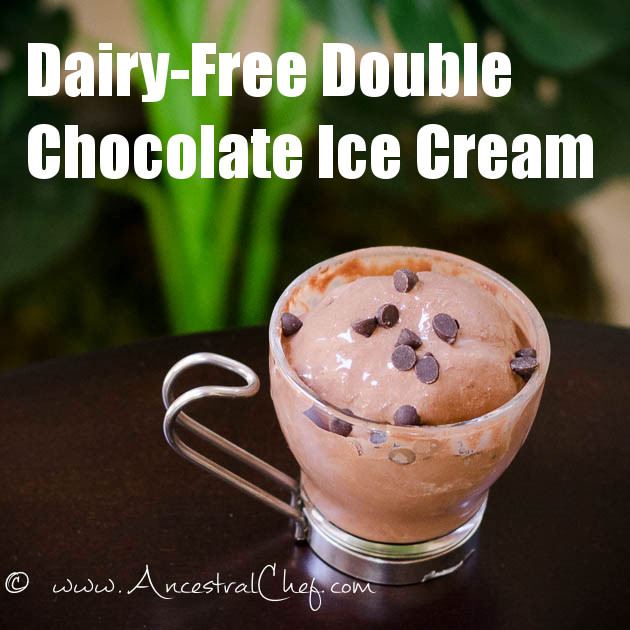 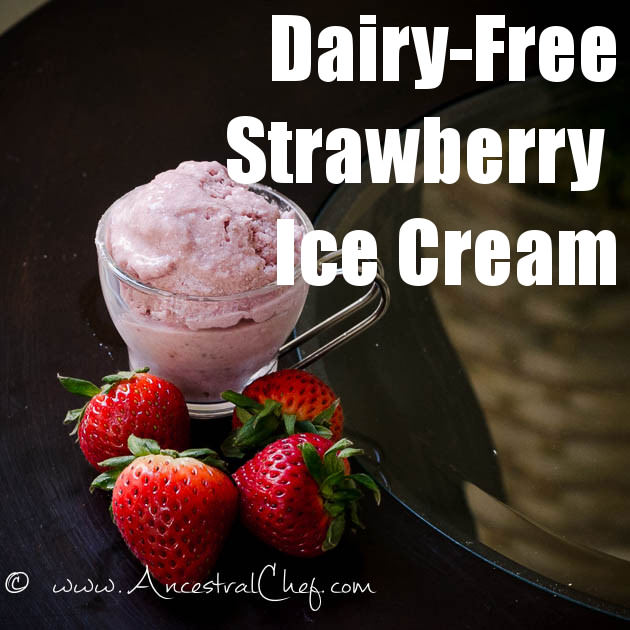 Frozen bananas are seriously creamy when they’re blended well, and this recipe makes good use of them along with chocolate powder. Since the bananas are sweet, additional sweeteners are optional for this recipe. Another reason why frozen bananas are fantastic for making ice cream is because the recipe won’t require an ice cream maker. All you do is blend and serve. Which means, you can enjoy the recipe in just a few minutes!!

This Paleo ice cream recipe caught my eye because it uses coconut milk kefir (a type of fermented coconut milk) as the thickener. Coconut kefir is considered a highly nutritious (and delicious) drink and you can find it sold in many Whole Foods in the US.

Most Paleo chocolate ice cream recipes call for chocolate powder, but this recipe uses 85% solid dark chocolate which you then melt and combine with coconut cream. It’s another seriously easy recipe, and it doesn’t even require an ice cream maker!

2 ingredients and a small food processor are all you need for this easy Paleo ice cream recipe!

Chocolate, coffee, and coconut milk? Sounds like the ingredients for a delicious Paleo drink, but when frozen, they also produce an amazing Paleo ice cream! And I love Healy’s idea of using a wide-mouth jar to make this ice cream in.

I loved gelato in Italy, and this recipe brings back many happy memories from Italy. With just 4 ingredients and some food processing, you can bring Italy to your home!

I’ve never tried blueberry ice cream before (in fact, I don’t think I’ve ever seen this flavor at the store!), so this recipe really intrigued me. I love blueberries and have enjoyed it in many things (including baked egg muffins!), so why not ice cream. If you try this recipe, let me know how you like it! 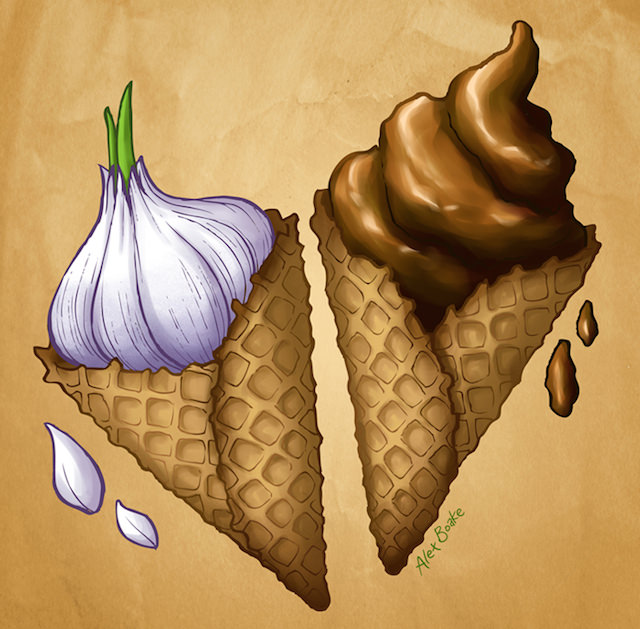 My parents live pretty close to Gilroy, California, and it’s the Garlic Capital of the World and home to an annual Garlic Festival! When you drive through Gilroy, you can’t help but smell the garlic in the air (yes, it really is that strong), and on one occasion many years ago, I stopped off there to try some garlic ice cream! That ice cream was nothing in comparison to Alex’s creation here! The dark chocolate, egg yolks, and cream add a world of difference. So, if you don’t want to drive all the way to Gilroy to try garlic ice cream, then try making this even more delicious version at home! Alex is a really talented illustrator (you can find her blog here) and the image above was provided by Alex.

This is a seriously rich chocolate ice cream recipe! With milk, cream, and egg yolks to create a smooth and thick texture as well as dates, solid dark chocolate, and cocoa powder, you know this recipe is going to be a winner.

This recipe is really more of a chocolate milk shake rather than an ice cream, but I included it in this round up in case a chocolate milkshake caught anyone’s fancy. Also, the raw almond butter ingredient caught my eye.

This is the perfect July 4th treat if you’re American, so save this recipe and wow everyone at your July 4th party. The Red part comes from a honey raspberry syrup, the White part comes from a lemon whipped cream, and the Blueberry ice cream part is simply blueberry ice cream! The only part of this recipe that’s dairy is the whipping cream used to make the lemon whipped cream.

My kitchen is already overflowing with gadgets and equipment, so I completely understand those of you that don’t have an ice cream maker, especially if it’s probably not something you’d use all the time. So, that’s why there’s this whole list of recipes that don’t require an ice cream maker at all! In fact, you can make many ice cream recipes without a machine (you just have to stir the ice cream every 30-60 minutes so that large ice crystals don’t form in them). If you don’t stir them, then they tend to end up being a large block of ice! Adding a little bit of alcohol (e.g., in the form of vanilla extract or little bit of hard alcohol) can often help ensure the ice crystals don’t form too quickly.

With ingredients like carrot juice, cashew butter, cinnamon, ginger and maple syrup, you know this Paleo ice cream recipe is going to be real tasty!

Avocado and coconut milk provide the creaminess in this Paleo ice cream recipe with honey or pure maple syrup and chocolate chips providing the sweetness.

This is a nice fruity concoction with bananas and “non-dairy milk” of your choice.

This is a very healthy, vegan treat that’s ultra-rich and creamy.

Balsamic peach ice cream sounds simply divine to me! Please let me know if you try this one! (Note that this recipe does call for grass-fed ghee.)

This was George’s first attempt at making ice cream using his ice cream maker, and yet it’s still amazing! I don’t know how he manages to create stunning Paleo creations every time!

I think the title says it all.

I have to just say this one sounds incredible. I’ve never even thought to add sweet potato to ice cream! This is another amazing recipe from Julie at Paleomg.

This ice cream recipe has a few ingredients that I wouldn’t normally use (xantham gum, sugar free toffee, and heavy whipping cream), but I wanted to include this for anyone that wanted a low carb ice cream option!

Which of these Paleo Ice Cream Recipes did you try?

Let me know in the comments below which one is your favorite!

Thanks for sharing my avocado deliciousness! 🙂

Thanks for including my recipe Louise! What a great list. 🙂

The weather’s turned hot here, and I’m definitely craving frozen treats. Thanks for a great list, and including me in your top 3!

Hi Louise, thanks for featuring my balsamic strawberry & basil dairy-free ice cream! Lovely round-up and it is a super hot day over here today. I’m already half way into the kitchen trying to decide with new ice cream flavor to try out 😉

What an amazing list of frozen goodness. Thanks for including my Tropical Tango “Ice Cream”!

Great round up – I’m definitely craving ice cream now! Thanks for including my Pistachio Chocolate Chip Coconut Ice Cream recipe!