9 Types of Paleo “Pasta” [How to make, Recipes, + Infographic] 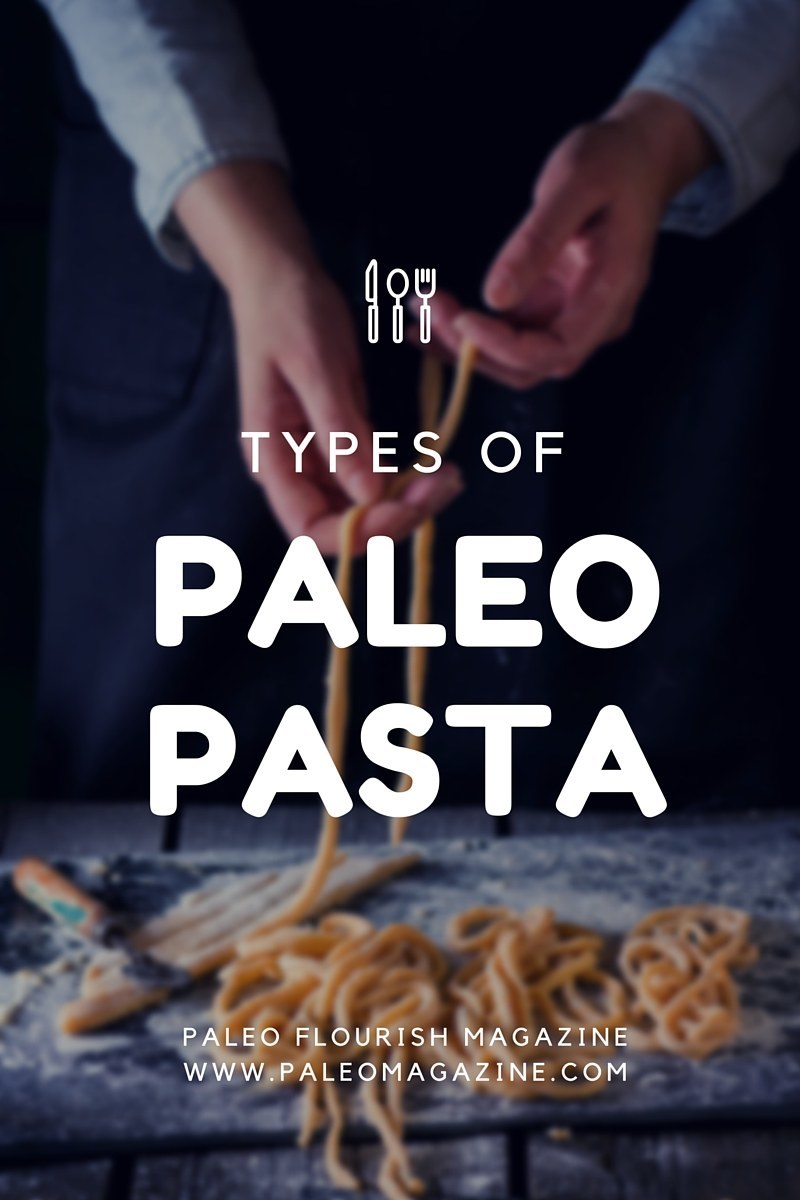 Pasta in its various forms has become such a staple food of our society that it’s really tough to know what to eat for dinner when spaghetti, linguine, fettuccine, and even rice noodles are taken out of the equation.

So, in this post, we’re going to show you 9 types of Paleo “pasta” as well as recipes using each type of Paleo pasta so that you can start adding back delicious but healthy pasta to your meals.

What Is Paleo Pasta?

Let me start off by clarifying that Paleo “pasta” is generally not going to be what you traditionally associate with the word pasta – it’s not made of wheat, rice, or some other grain, and it’s not going to have exactly the same texture because it’s grain-free. So if you’re expecting your regular Italian pasta or Asian noodles, then you will be disappointed.

Having said that, most types of Paleo pasta are very similar to what regular pasta looks like and some of them even have a similar texture and flavor.

Paleo pastas are generally more nutritious than regular pasta (because they’re often made from vegetables) and some of them are super low in carbs and calories (which means you can eat more of it even if you’re trying to lose weight).

Many Paleo pastas are just as quick and easy (or even faster and easier) than regular pasta to make. And you can create a ton of variation by just switching up the sauce to go on top of your favorite Paleo pasta.

Below you’ll find all 9 types of Paleo pasta (plus an infographic you can pin on Pinterest to save this post). You’ll also find information on how to prepare or where to purchase each type of pasta as well as links to various Paleo recipes using each type of pasta.

The 9 Types of Paleo Pasta 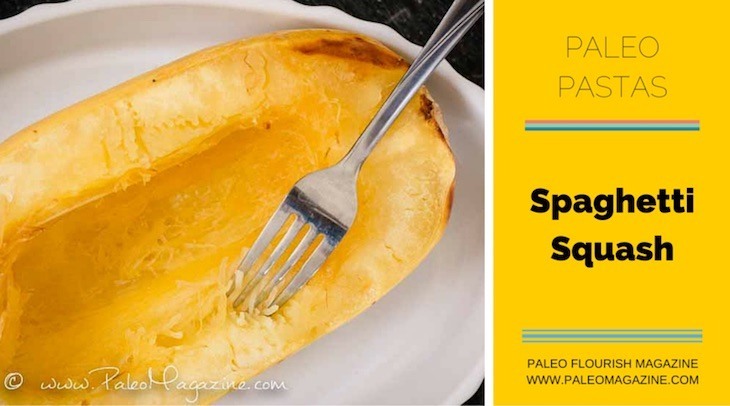 This is probably one of the most common types of Paleo pasta you’ll see in Paleo recipes. Spaghetti squash is a melon-looking yellow vegetable that naturally forms spaghetti-looking strands when cooked. Just use a fork to gently scrape the strands off. It’s a super easy dish to prepare and you can top it with a variety of different sauces.

How To Prepare Spaghetti Squash

One of the easiest ways of preparing spaghetti squash is to microwave it. For step by step instructions, check out our post, How To Microwave Spaghetti Squash here. 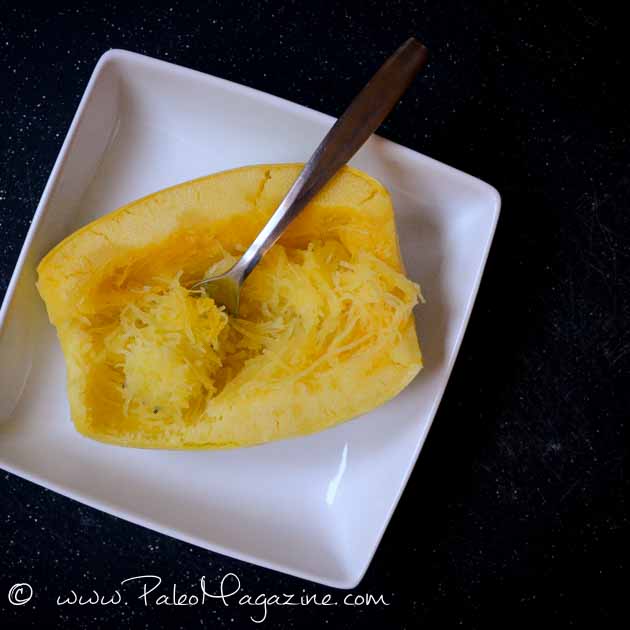 Spaghetti squash can also be baked for a delicious roasted flavor. For instructions on how to prepare spaghetti squash in the oven, check out our post, Coconut Oil Baked Spaghetti Squash. 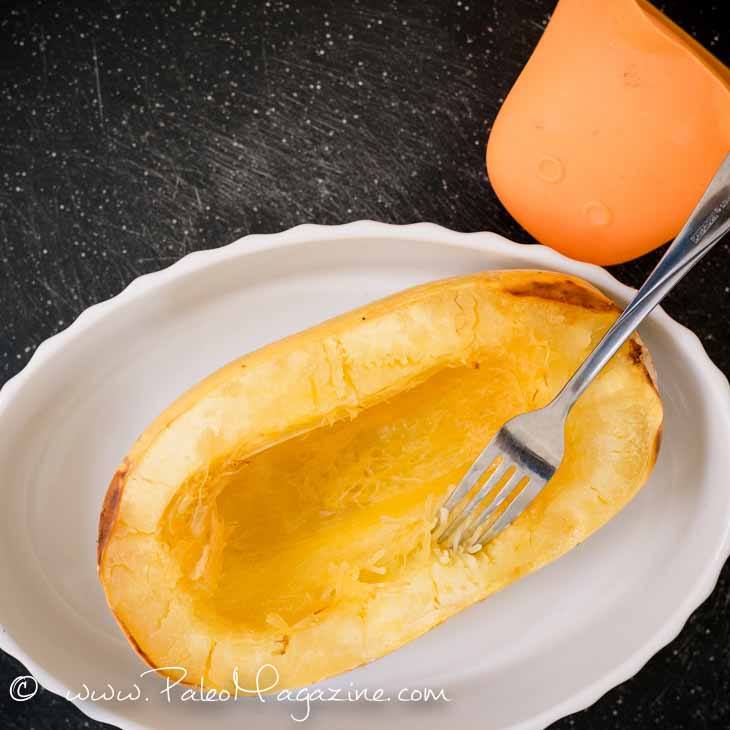 Spaghetti bolognese never tasted so delicious and healthy as this easy Paleo and Ketogenic diet friendly spaghetti squash bolognese recipe. You can enjoy this for dinner tonight. 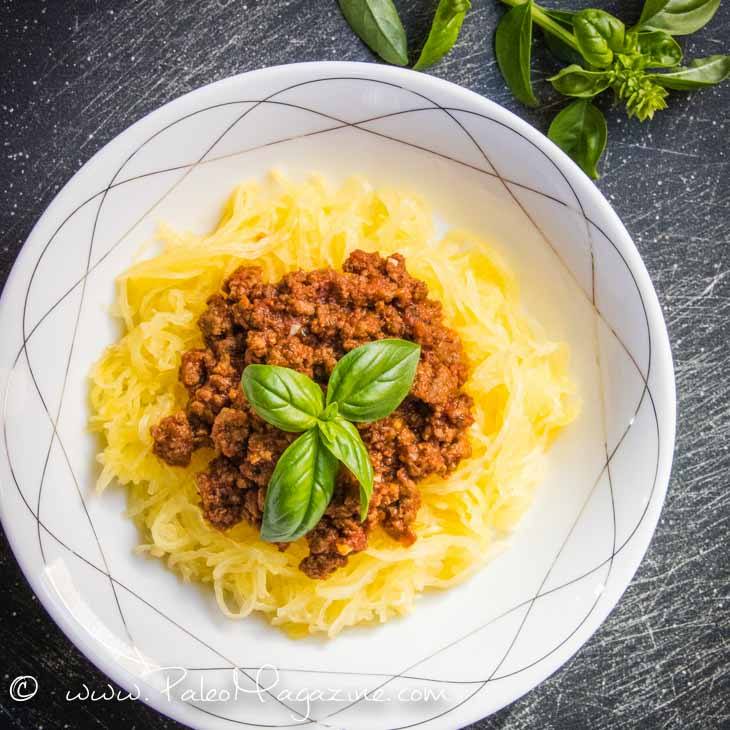 There are so many different sauces and meats you can serve on top of spaghetti squash, and seared scallops with pesto sauce is rare but delicious combination to try.

For a more traditional pasta approach, give this recipe a try. The creamy mushroom sauce goes really well with the spaghetti squash. 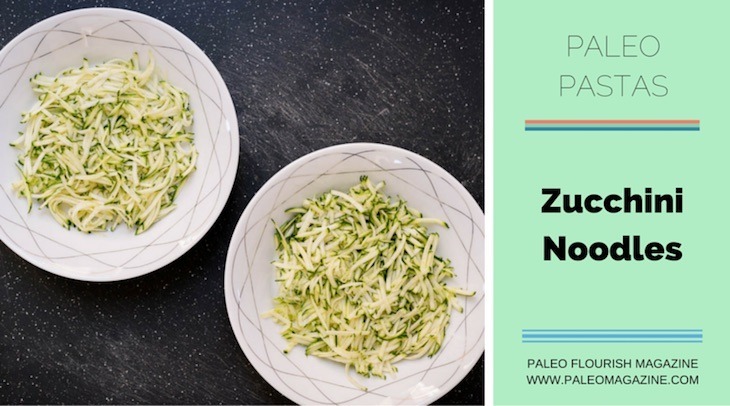 This is perhaps one of the easiest Paleo pastas you can make as most of us have access to zucchinis regularly. (For obvious reasons, zucchini noodles are sometimes known as zoodles.) You can eat these noodles raw or you can parboil it.

How Do You Make Zucchini Noodles?

Spiralizers are an easy kitchen utensil to make zucchini noodles with (you can also use them to create noodles out of other vegetables or fruits). They’re cheap and easy to use. 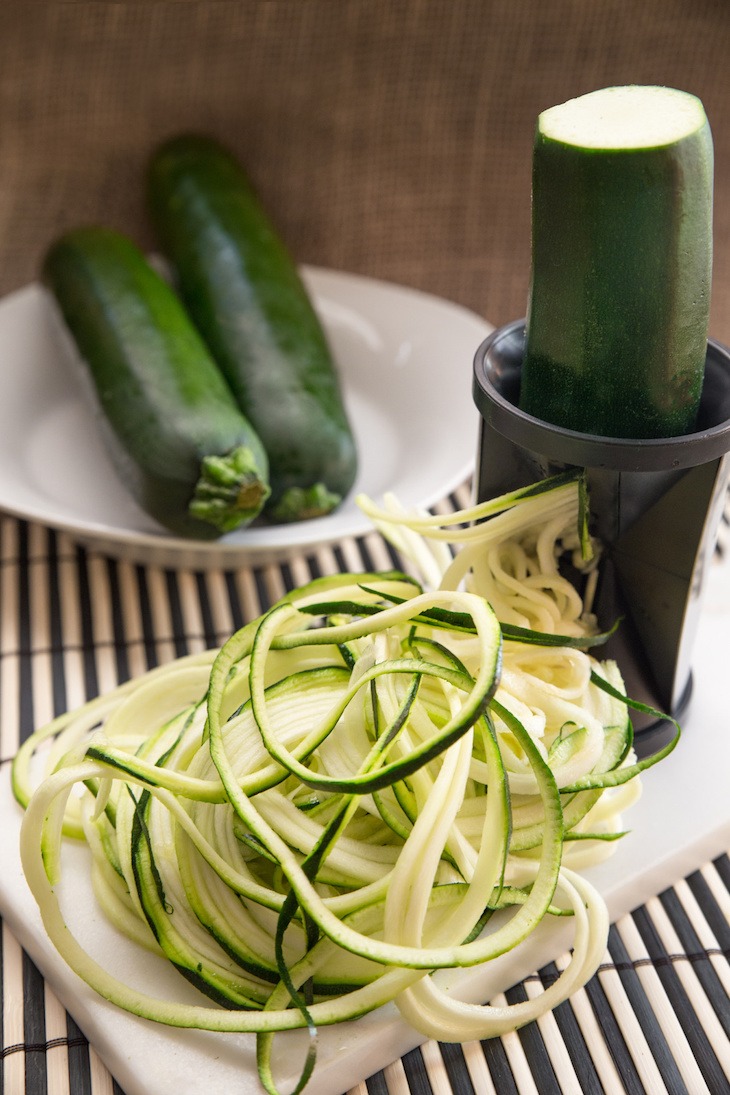 Use a potato peeler

If you don’t want to buy any other kitchen utensils, then you can create thick fettuccine-like zucchini noodles using a simple and super cheap potato peeler. 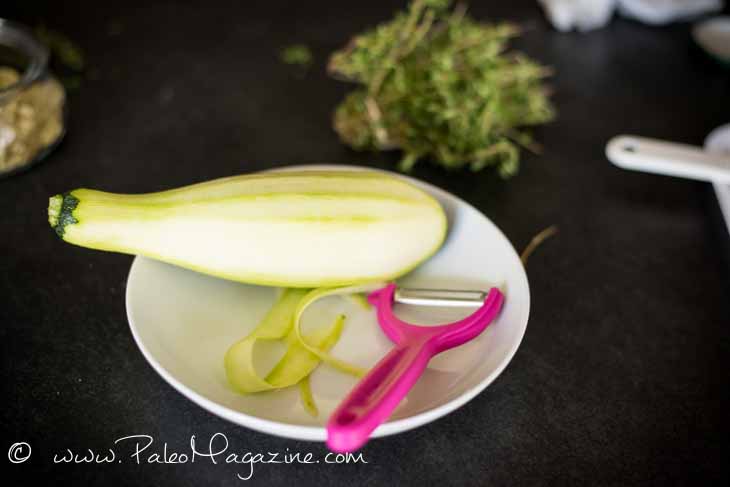 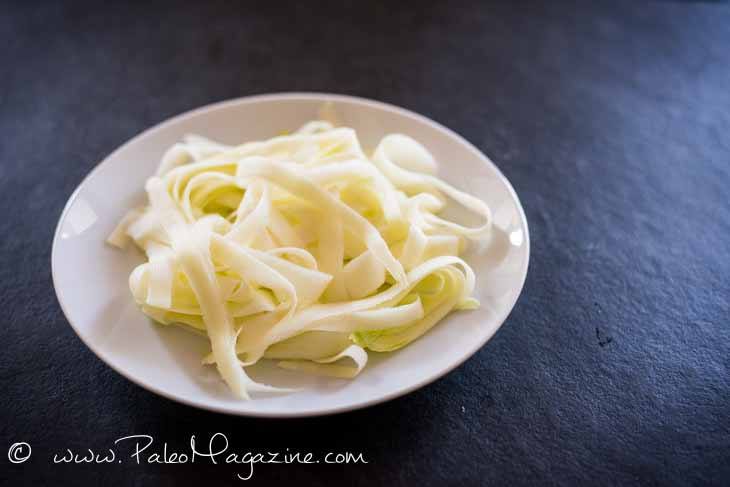 Use a Julienne Peeler

A julienne peeler is like a potato peeler with jagged blades so that you get thin strands of zucchini instead of one thick long strand.

Use a food processor shredding attachment

If you have a food processor with a shredding attachment then that’s another easy method for creating zucchini noodles – the strands will be shorter than if you used a peeler or spiralizer. 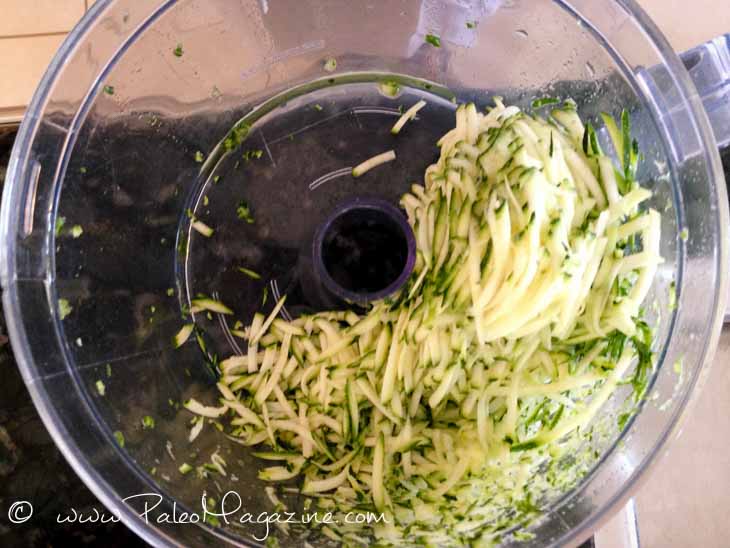 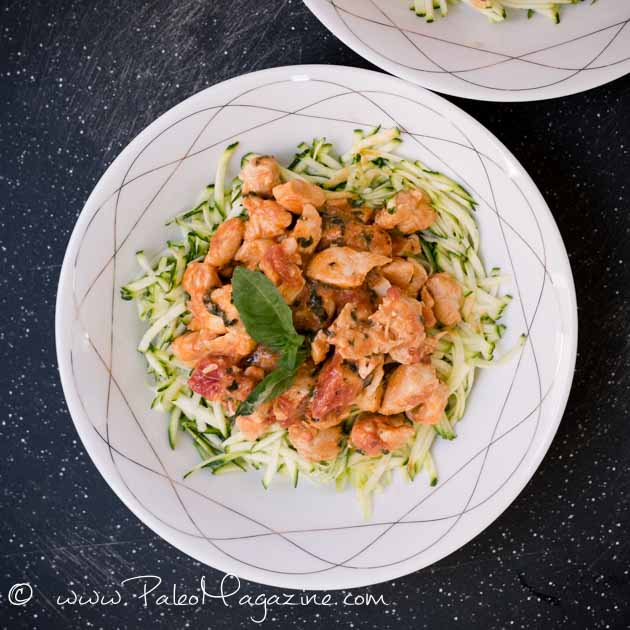 This creamy tomato basil chicken “pasta” dish takes less than 30 minutes to make from start to finish. It’s great for a quick and low carb (keto) lunch or for a simple dinner. 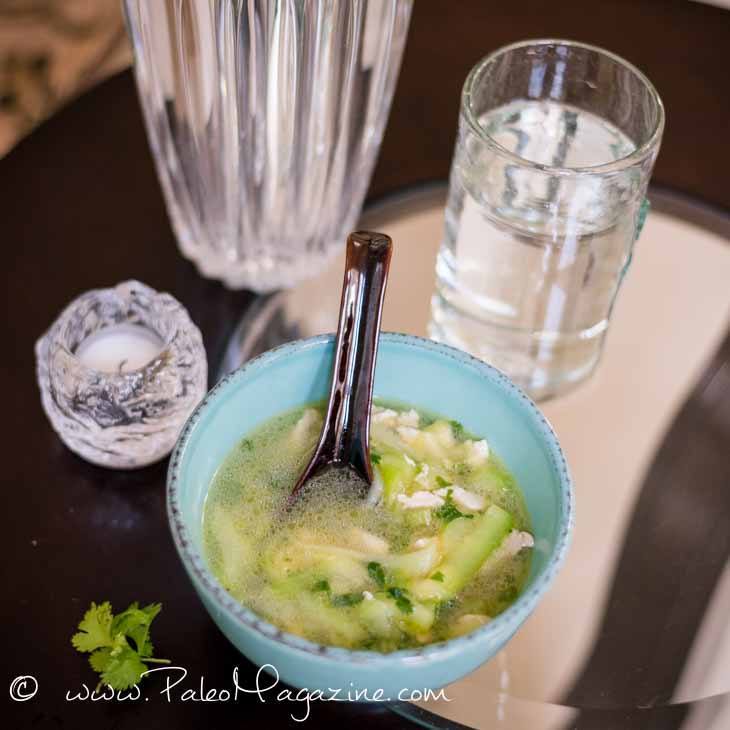 Chicken noodle soup is another classic that you can enjoy again on the Paleo diet when you use a Paleo “pasta” alternative. Zucchini noodles are easy to add into this dish – and they cook fast too. 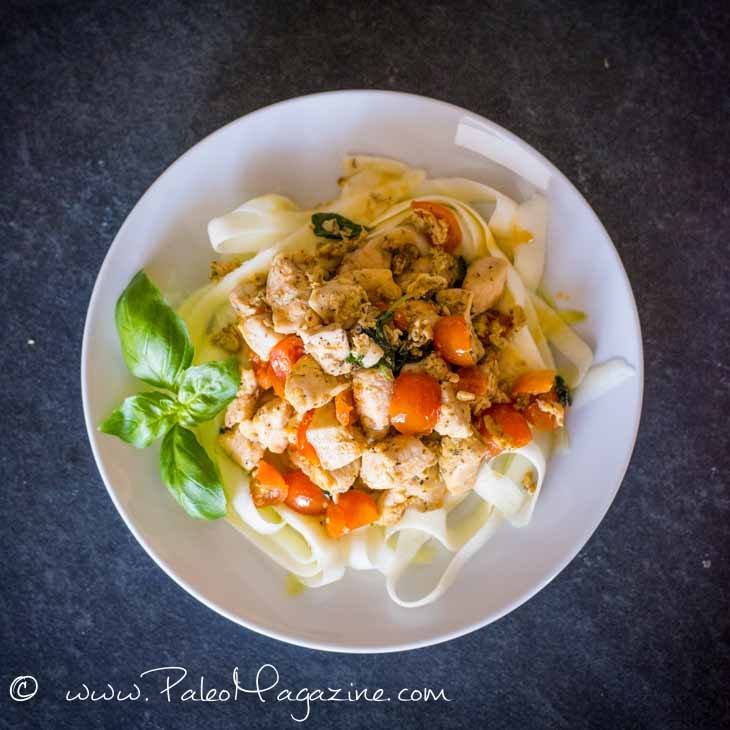 There are so many different sauces you can add on top of zucchini pasta. This Tuscan chicken “pasta” recipe is another example. Enjoy delicious herbs and flavors in this dish without all the carbs and wheat. 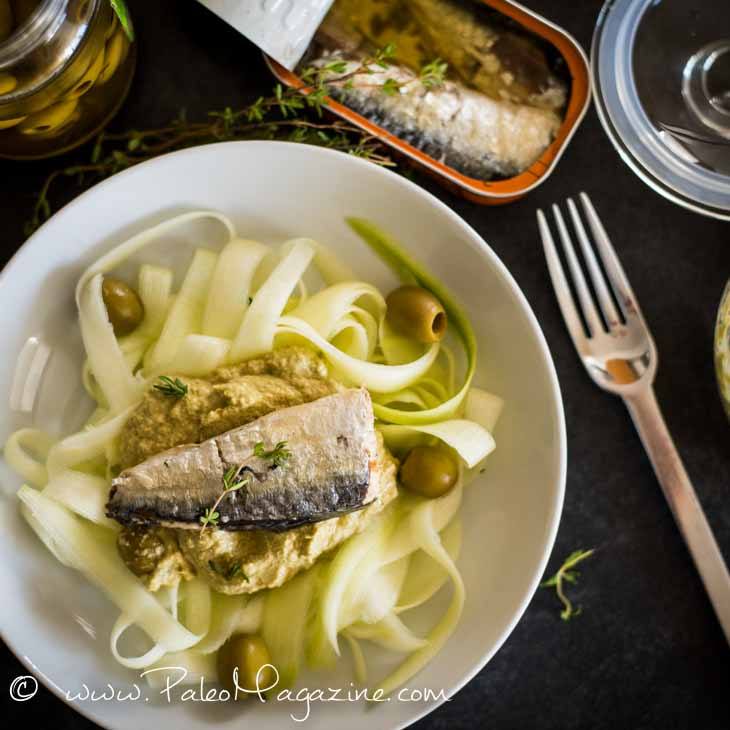 Zucchini noodles don’t even need to be cooked (you can eat them raw). So for a complete no-cook dinner, give this garlic olive tapenade with sardines and zucchini noodles a try. 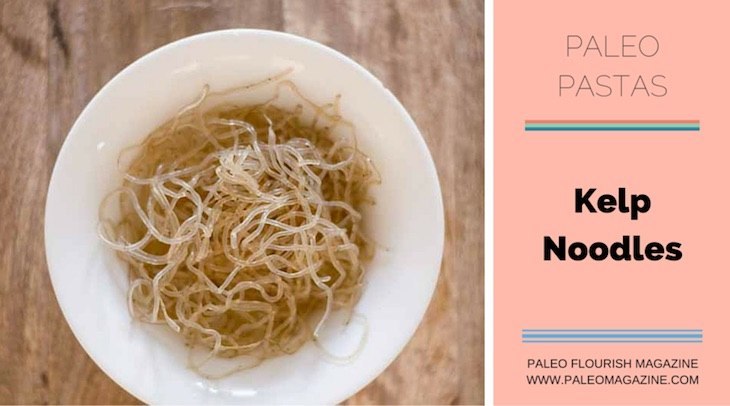 Kelp noodles are brownish opaque noodles that are a bit crunchy in texture. They’re made from seaweed and can be found sold in many health food stores or online on Amazon.

Kelp noodles are high in iodine and low in calories making them a great option when you’re looking for Paleo or Ketogenic noodles to use in your dishes. 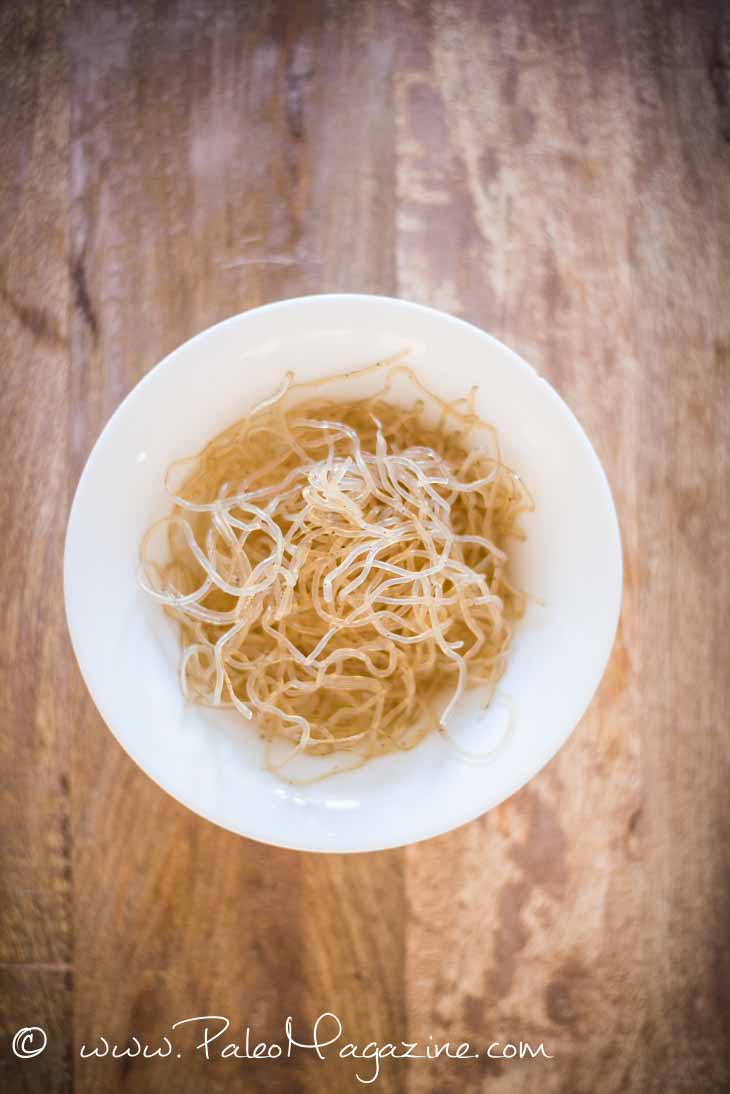 Enjoy delicious “ramen” complete with all the yummy pork slices but without those gluten-filled noodles.

This is another Asian inspired noodles recipe. These kelp noodles are delicious when combined with sesame oil for a simple but delicious side dish or appetizer. Top with some pork or even fish for a complete meal.

If you’re looking for an easy and light salad recipe using kelp noodles, then this is the one.

As Michelle demonstrates in this recipe, kelp noodles can also be stir-fried with your favorite meats and vegetables for a quick and easy dinner. 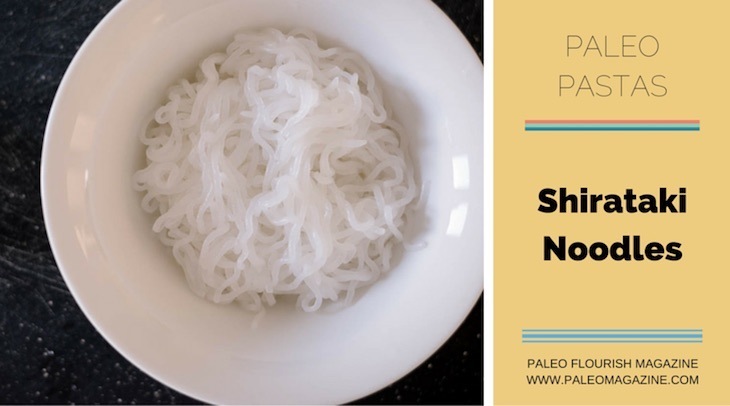 Shirataki noodles are made from the root of the konjac plant. The bulb at the base of the stem is high in fiber and holds on to a lot of water. That means shirataki noodles are low in calories (they’re mostly just water and fiber) and help you feel full faster. They’re great on a Paleo or a Ketogenic (or low carb) diet and you can buy them prepackaged from many health stores or online at Amazon. You’ll find shirataki molded into a variety of different “pastas” (from angel hair to fettuccine) and even “rice.”

How To Prepare Shirataki Noodles

Shirataki noodles are definitely not difficult to prepare, but they do have a natural smell and taste that you may not enjoy when you first open the packet.

To get rid of the shirataki noodle smell and taste, follow the steps below:

This simple recipe will let you enjoy spaghetti with tomato pasta sauce again. It’s both Paleo and Ketogenic-friendly (low carb) so you don’t have to worry about the carbs. 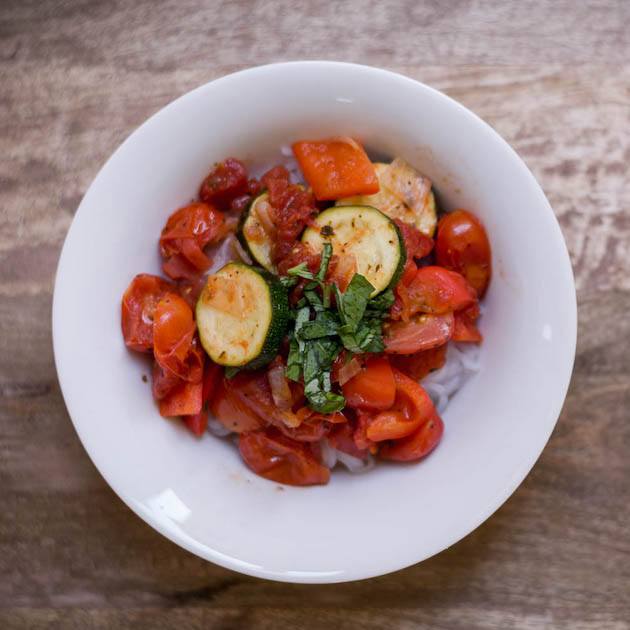 This unique asian noodle salad recipe is both colorful and refreshing. Enjoy the variety of flavors and textures in this salad.

Enjoy once again shrimp scampi with this easy recipe – it uses easy-to-find ingredients to create a delicious, ketogenic, as well as nutritious dinner in under 30 minutes. 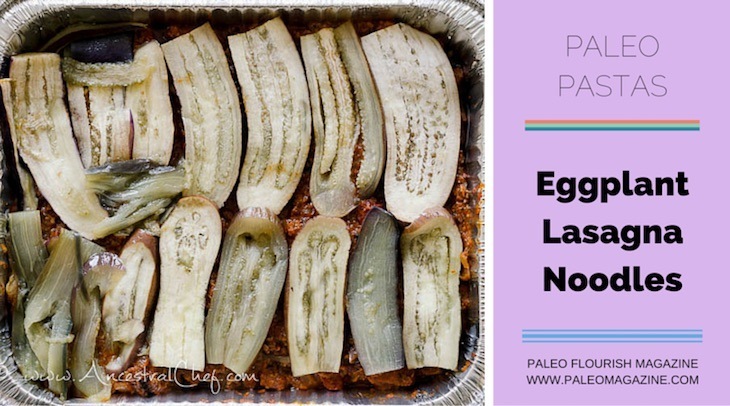 Eggplant is an unusual vegetable for creating pasta with, but they’re great for when you need large lasagna noodle sheets. Sliced thin sheets of eggplant soften after being parboiled and they can soak up the flavor of the sauce they’re cooked in without imparting very much of its own flavor. 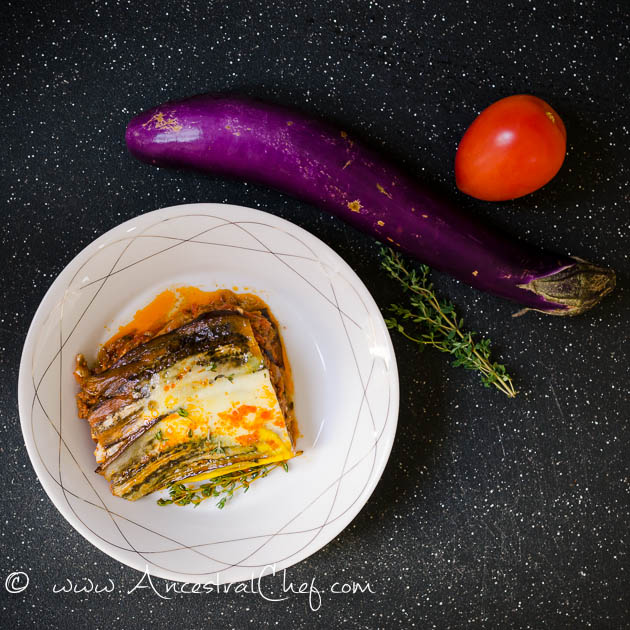 This Paleo lasagna is one of my favorite recipes as it’s dairy-free as well as grain-free but it’s still filled with tons of amazing flavors. It’s really comforting to be able to enjoy a large slice of delicious lasagna again. 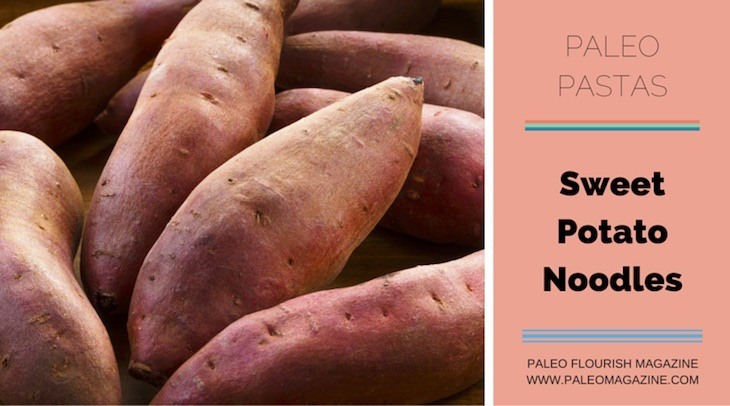 Various root vegetables can be used for creating all sorts of Paleo pastas. Sweet potatoes are often used, but carrots and even rutabagas are used. Just note that root vegetables are higher in carbohydrates and so aren’t generally suitable if you’re following a Ketogenic or low carb diet.

This recipe is definitely easy to make; and it illustrates how you can use any root vegetable to create noodles and pastas.

Carrots go really well in this classic Thai dish. Give it a try for a more interesting dinner option.

This delicious pasta recipe uses spiralized rutabagas as the “pasta.”

For an easy sweet potato “pasta” recipe, check out this one from Mark Sisson. 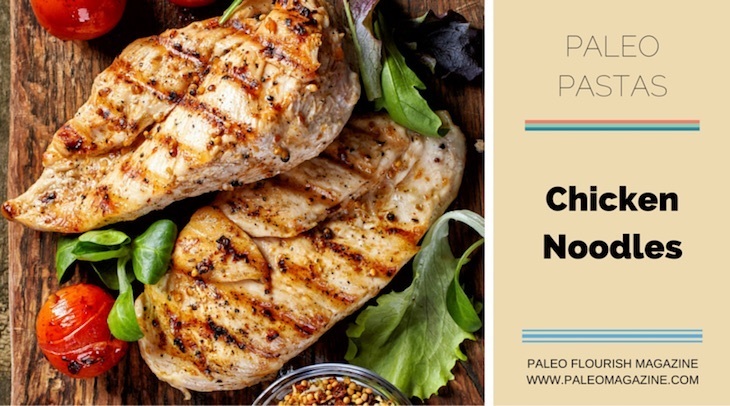 There aren’t many recipes using noodles made from chicken, but when we saw this concept, we just had to included it! If you get a chance, give this recipe a try. 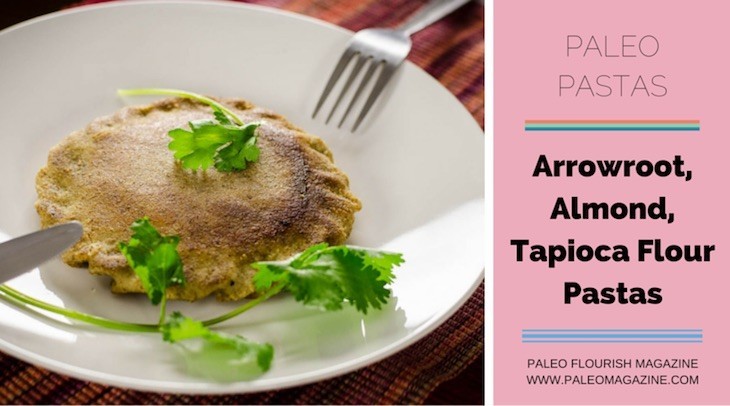 These Paleo pastas made from Paleo flours are probably more similar in color and texture to what you traditionally think of as “pasta.” While they do take a bit more effort to make, they can be very impressive to non-Paleo guests as well as delicious to eat.

This recipe uses cassava flour to create dough that you can then cut into thick noodles.

Using a combination of arrowroot, tapioca, and almond flours, Amy has created a beautiful pasta that looks very similar to Tagliatelle. 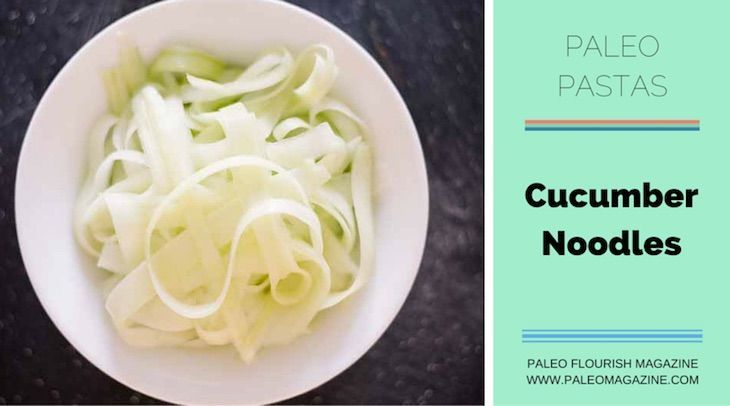 If you’re looking for ease, then cucumber noodles are fantastic. You can pick up cucumbers from most stores around the world, and within a few minutes you can create “noodles.” You can use a spiralizer or a peeler to create your noodles. Although there aren’t that many recipes using cucumber noodles, you can basically use them whenever you see zucchini noodles used.

Cucumber noodles are especially great for creating salads – you can chill the cucumbers in advance to create refreshing noodle salads for the summer months.

Because the center seeds part of the cucumber contains a lot of water, it’s best to not use that part when creating your noodles. That’s why a potato peeler probably works best in creating these noodles rather than the spiralizer or food processor. 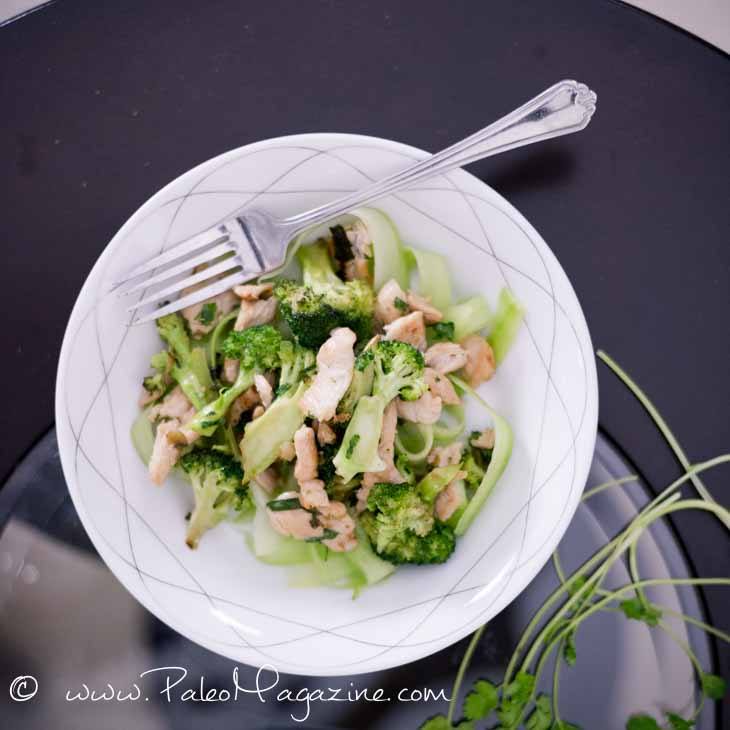 Give this cucumber noodles recipe a go if you’re looking for a simple and refreshing Asian-flavored side dish.

We’ve created a simple infographic with all 9 types of Paleo pastas so you can save it to your pinterest board or share it on social media with your friends. Please feel free to pin, share, or embed on your website! It’s a great way to share this knowledge.

What About Gluten-Free Pasta?

So unfortunately most gluten-free pastas that you see in the stores are actually not Paleo. They’re typically made from flours like rice flour. The only store-bought Paleo pastas that you’ll generally be able to find are kelp noodles and shirataki (or Miracle) noodles, which we’ve covered in this post.

That’s why it’s better to stick with one of the 9 Paleo pasta options listed in this post – my favorites are zucchini and cucumber noodles because you don’t even need to cook them and they can be used in a variety of dishes (from soups to stir-fries). They’re also a great way of adding more vegetables and fiber to your Paleo diet.

We’ve got you covered! Check out this giant list of 52 delicious Paleo pasta recipes we’ve found from top bloggers here.