Home » Blog » Paleo Diet » Paleo Diet 101 » What Are Custard Apples (aka the Buddha’s Head Fruit) and How Do You Eat Them?

What Are Custard Apples (aka the Buddha’s Head Fruit) and How Do You Eat Them? 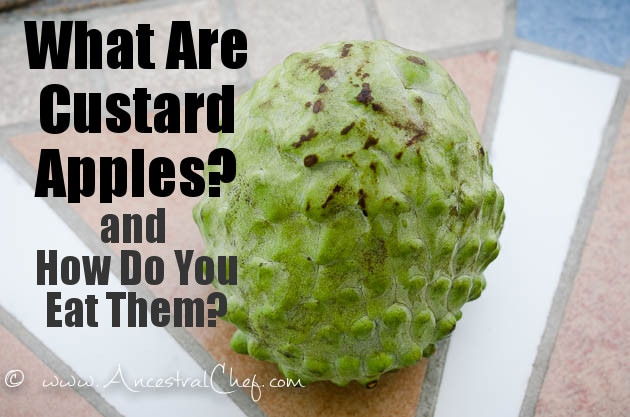 I’ve been living in Asia for the past month, and I’m absolutely loving the huge variety of fruits and vegetables here. I keep discovering new ones every day. So, I thought I would start featuring a few of the ones that I’ve discovered.

I’m starting with Custard Apples (aka the Buddha’s Head Fruit) because they have such a weird name!

Despite their weird name, they’re actually pretty common in many warmish climates (although this trip was the first time I had come across them). According to the all-knowing internet, you can find custard apples in countries like Spain, Peru, Taiwan, Australia, China, and many more.

What Are Custard Apples

What do custard apples look like? They’re a fairly large fruit (generally larger than your palm), and as you can see from the photo below, they’re green on the outside (white on the inside) and have large bumps on the skin. 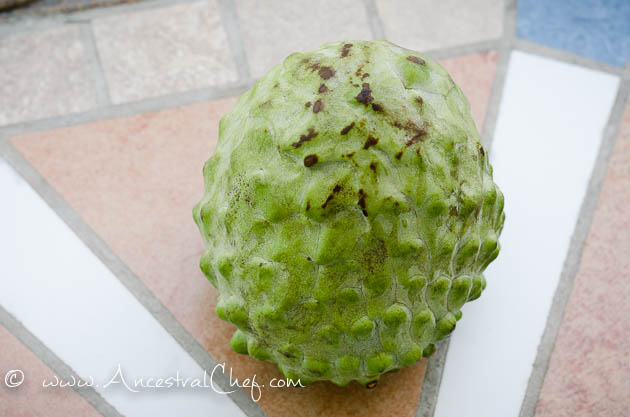 What are the different names for custard apples? Looking online, it seems that there are a ton of different names for custard apples! In Taiwan and China, it’s often called ????, which seems to roughly translate into “pineapple Buddha” (supposedly because it looks like a Buddha’s head and tastes like a pineapple). They’re also often referred to as Cherimoya or buddha’s head fruit in Asian countries. 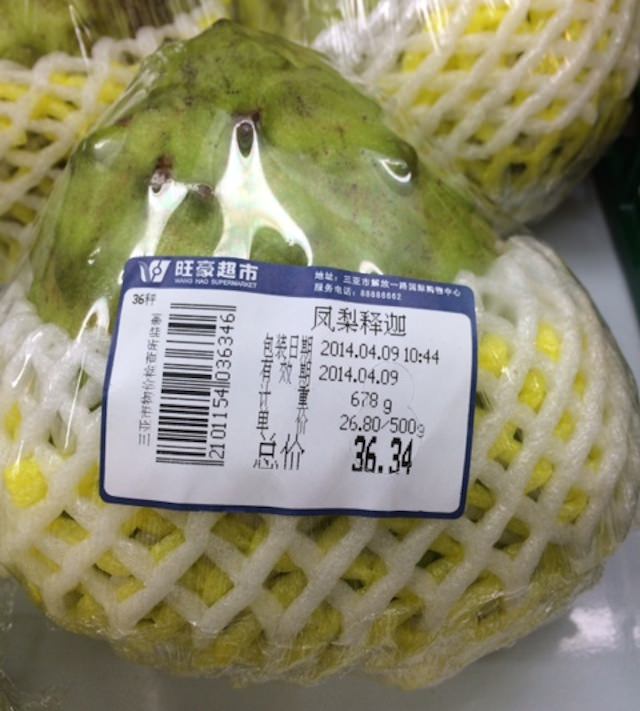 In the Philippines, it’s called atis, and in Latin America, it may be known as anón, fruta do conde, grenadilla, etc. Even in English it has a ton of names – from sugar apple to atemoya to sweet sop as well as custard apple.

Are there different varieties of custard apples? According to this Australian website, there are 2 main varietals of custard apples – Pinks Mammoth and African Pride. I have to admit they look rather similar to me from the photos, but I believe the one I’ve been eating (and the one that’s shown in the photos in this post) is the African Pride varietal.

UPDATE: I’ve found a different varietal in Vancouver’s Granville Island Market. You can see from the photos below that they look slightly different from the ones above. 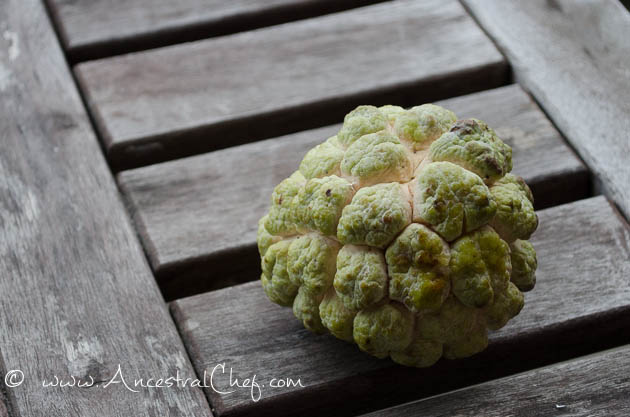 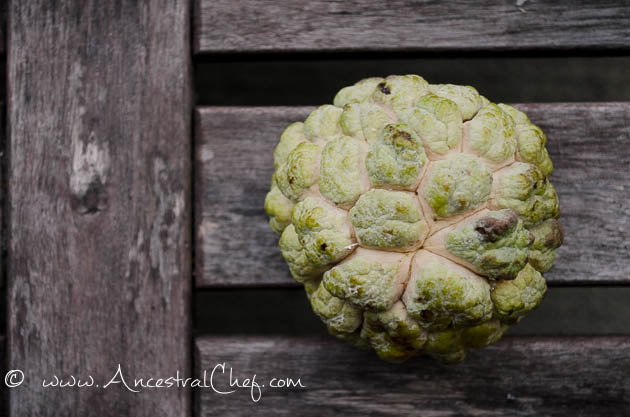 How Do You Pick a Ripe Custard Apple?

Custard apples ripen in your home at room temperature, so you can buy an unripe one and let it ripen. However, if you’re looking for a ripe one to eat, then look for ones that are soft to the touch (but not too soft). Often there’s a slight darkening on the bumps. When very ripe, the bumps will come off easily with just a small amount of pressure, so be gentle when touching them!

How Do You Eat a Custard Apple?

The Pinks Mammoth varietal seems to have thicker skin that will just come off when you peel it gently leaving a custard-like milky-white interior which can be scooped out, and this blog has photos of that varietal.

The African Pride varietal I’ve been enjoying is a bit more solid in texture (although the skin is thinner and much softer too), and you can actually cut it with a knife into slices (see photo below). This varietal also has large black seeds inside, but they’re pretty easy to dig out and remove. 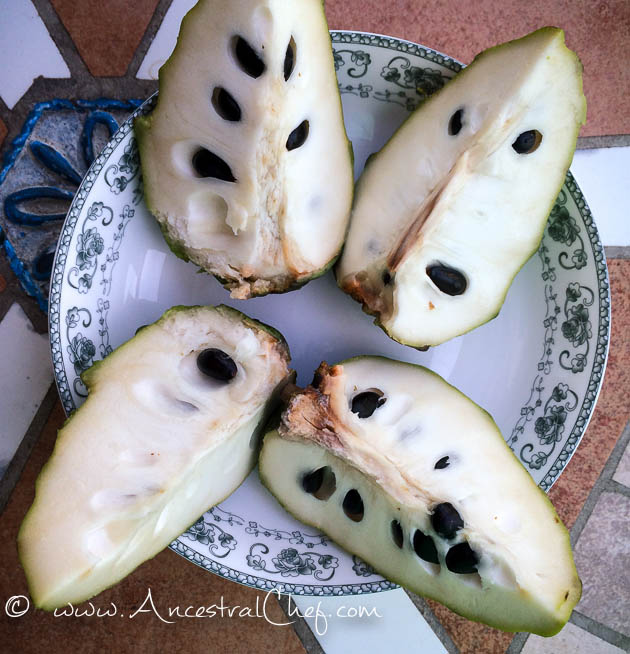 The first thought that went through my head when I tasted a custard apple for the first time was: “OMG, this is soooo sweet!” and I guess that’s why “sugar” and “sweet” feature in some of its English names!

I’ve found custard apples to be a great after-dinner dessert, and they’re so big that sharing one fruit between two people is more than enough!

What Do You Think of Custard Apples?

This trip was the first time I had ever seen a custard apple, and this post is simply my thoughts on them. So if you’ve eaten them before, please let me know what you thought of them in the comments below – did they taste like pineapples to you? Did you have the custard-like variety? Where did you try them and what were they called there?

While on vacation in cambodia, I brought home some custard apple seeds. I now have a tree about 4 feet high. I am having trouble when to harvest. Some have fallen to the ground and the ants enjoyed them. I picked one the other day, it sat at room temp for about 3 days and was very mushy and grainy. neep help on when, how to harvest. I can send pictures if it helps. Thanks for any help.
Manuel

Hi Manuel – I’ve never picked ones from the tree before, but they are supposed to be very mushy, sweet, and a bit grainy. I believe they ripen after you pick them, so you can pick them when they’re still hard and eat them when they’re mushy and soft.

i am from Namibia, I’ve eaten my first Custard Apple in Rundu at my mothers lodge next to the Kaprivi river, it did not taste that sweet, it had an unusual taste, nothing like custard at all, the skin was a bit yellowish and it was very soft, some of the other peaple also ate it and they said that the ones that they were tasting was very nice and sweet, i do not know what was wrong with the particular one that I ate, should you maybe add sugar to taste?

I just found in Google. The Custard Apple is Cherimoya (Latin= Annona Cherimola).

The Soursop is in the same family as Custard Apple. The Soursop Latin genus= Annona Muricata

I could not find the Latin name for Buddha Head fruit.