Why am I Tired, and Why are My Feet Sore When Eating Paleo? 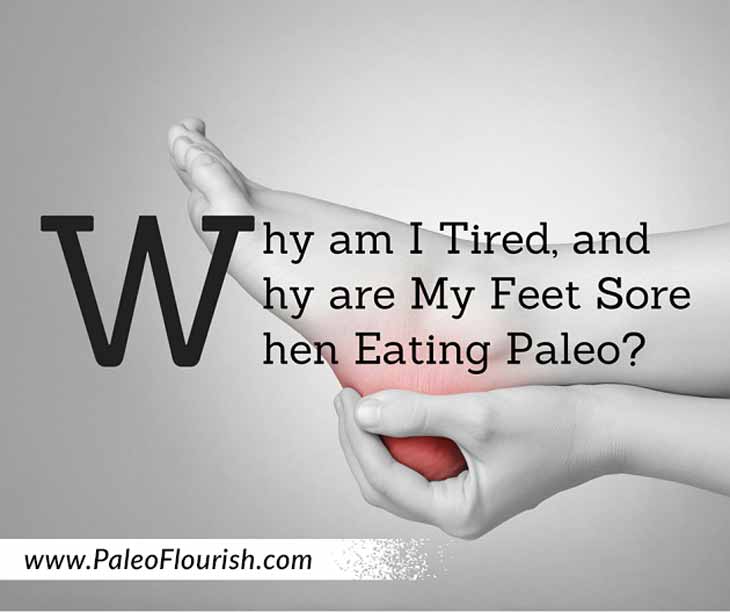 I recently got the following question from a reader…

A couple months ago my husband & I decided to join the Paleo lifestyle, and my body loved it! We both felt better, healthier, etc. But all of a sudden my husband started not feeling so well – every evening his stomach would hurt him, the bottoms of his feet also were hurting very bad & he was exhausted.

Every day, he was eating one non-Paleo meal, except for those 3 days when he started feeling bad. Some people told me that Paleo may not be right for him. He works in a physically demanding job. I got some dairy just for him & some gluten that is readily available when he needs. Why do you think his body is not taking well to Paleo?

Here’s what I told, her, which I thought you all might find helpful:

I’d love to give you a specific answer to your husband’s issues, but without some testing, it would all be a guess. It’s likely diet-related (stomach issues almost always are, and foot soreness is often related to gluten/dairy intolerances).

It’s a little bit odd that anyone would say Paleo isn’t for him, because all humans are pretty well adapted to eating whole, unprocessed foods.

However, for someone who’s very active, one of the first mistakes is often not getting enough calories. When we go Paleo, we often remove foods but don’t replace them with sufficient other foods. His exhaustion was likely due to some combination of not getting enough energy – which can happen either because he wasn’t eating enough or because he started eating fewer carbs, and his body might not have much metabolic flexibility if he’s been relying on carbs for a very long time – and also inflammation.

Also, he likely has a lot of inflammation going on right now that is not displaying as particular symptoms. For the most part, our bodies adapt to not always be in pain, and then when we start changing things (even for the better), we start showing other symptoms. I’ve had at least a few friends who gave up gluten and started having MORE stomach issues. Luckily, they all had great naturopaths who discerned that they had a lot of other gut issues, and that the gluten – although making those issues worse – was also covering them up to a degree.

Also, it’s quite possible that when you switched over to Paleo, he started eating more of particular foods to which he might be sensitive. If his gut flora is altered enough, even eating more veggies can often cause stomach pain, because he might not have the gut flora to properly digest many veggies. That happened to me for a long time before I rebuilt my gut flora (probiotics, fermented foods, resistant starch, etc.).