Why Do I Feel So Weak When I Start A Paleo Diet? 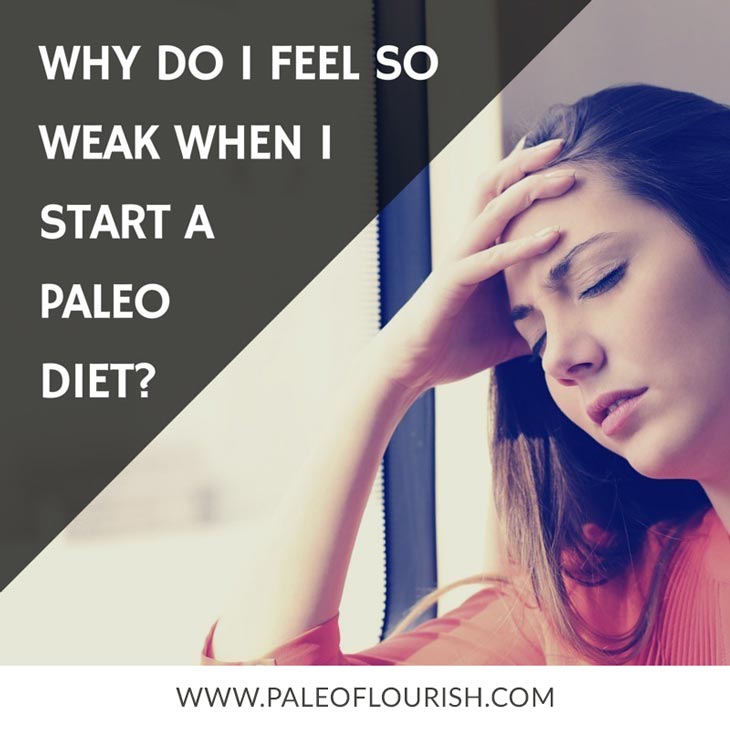 One of the questions I frequently get asked from people just starting a Paleo diet is “why do I feel so weak when I start Paleo?”

If you’re wondering that exact question, then you’re not alone. So, let me explain why a diet that’s supposed to pump you full of energy is making you feel so crappy at first.

Reasons Why You Feel Weak When Starting A Paleo Diet 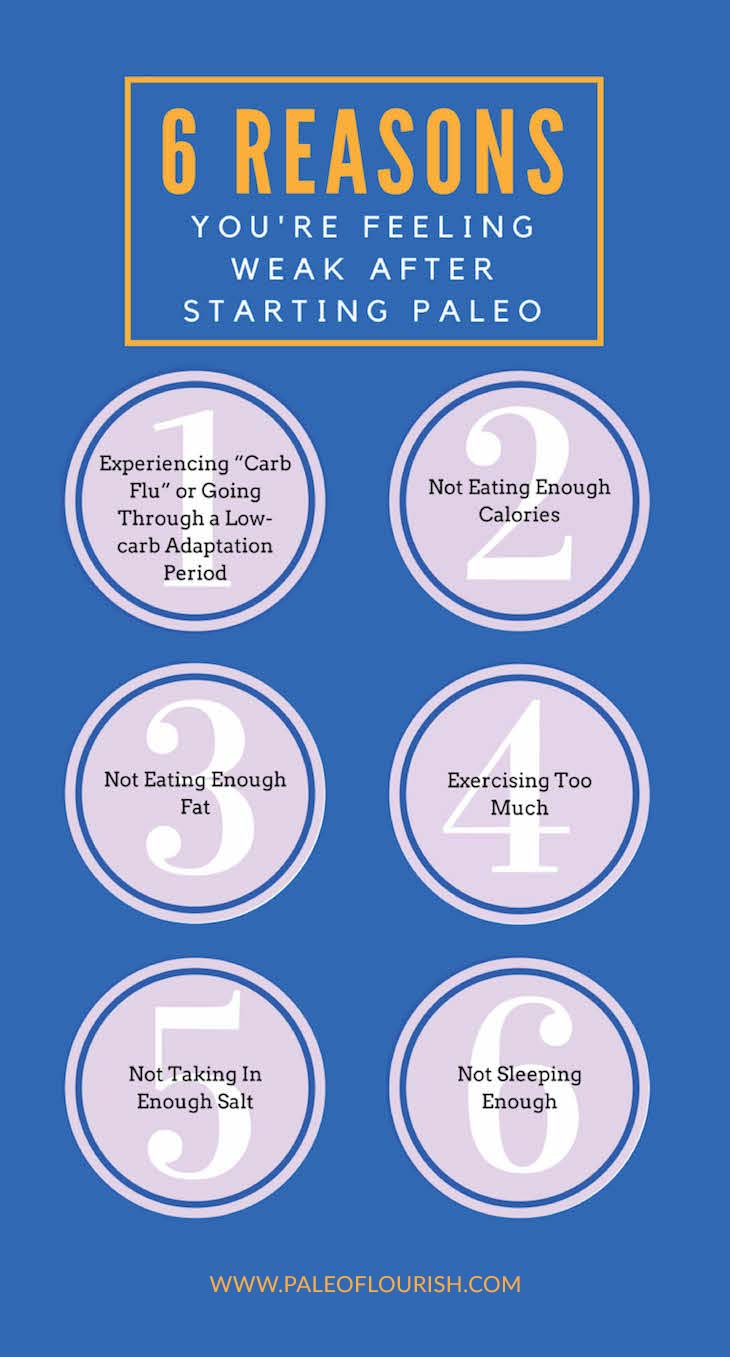 This is a common result when you remove most sources of carbohydrates (like sugar, beans, grains, processed foods) from your diet. It’s often explained as an initial period of suffering from carb withdrawal symptoms – common symptoms include headaches, dizziness, tiredness, difficulty concentrating, cravings, and generally feeling pretty down.

This period is sometimes called a low-carb or keto adaptation period. Dr. Eades describes it well in this article – if you’ve been eating a very high carb diet prior to switching to Paleo (i.e., most of us), then your body is filled with enzymes designed to convert carbs to energy. But when you switch to a Paleo diet and stop eating so many carbs, all of a sudden, those enzymes are out of a job. Instead, you’re having to reactivate the enzymes that convert ketones (produced because you’re eating a low carb and high fat diet) to energy.

These ketones would have rarely been produced by your body when you were eating a high carb diet, because that high carb diet prevented their production. During the low-carb or keto adaptation period (when you’re feeling weak and tired), your body is doing this enzyme switch, and until you fully switch over, your body simply cannot properly convert all the food you’re eating into energy.

SOLUTION: Eat a bit more carbs (pick Paleo carbs like sweet potatoes) initially and see if that makes you feel better. If not, check some of the other possibilities below.

When I first heard about the Paleo diet, I was incredulous.

“So, what do you eat on Paleo??” I asked my husband with a frown on my face.

For many people, the concept of giving up pasta, pizza, bread, cakes, etc., means that you’re left with very little from your previous diet to eat. One of the first days I was on Paleo, I ate some eggs, some bacon and ham and a few celery sticks. I wasn’t trying to limit my food intake at all, but I simply didn’t know what else there was to eat on a Paleo diet. I would walk around the kitchen, open the fridge, close the fridge, open the kitchen cupboards, and then close it because there was nothing else I thought I could eat.

While eating less is definitely a component of eating a Paleo diet, you have to be careful initially not to eat too little. In the end, the calories you take in do get converted into energy, so if you take in way too few calories, then you won’t have enough energy.

SOLUTION: Eat a bit more food. Try adding in a sweet potato or an avocado or eat more meals. If you don’t know what to eat, then check out our free 4-week Paleo meal plan. 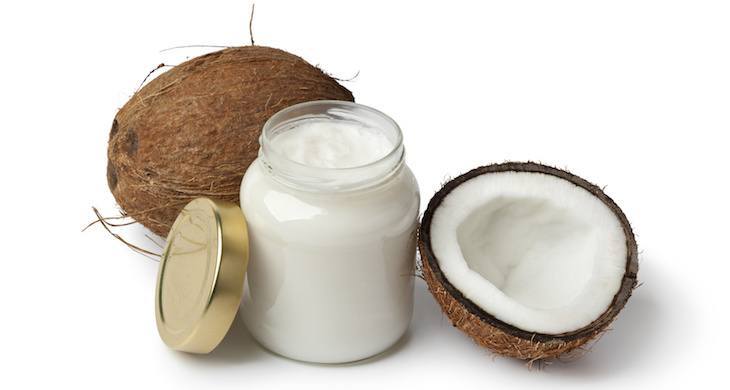 Most of us are afraid of eating fats. Fats have been labeled unhealthy, artery clogging, and fat building for so long that it’s difficult to believe that it can actually be fat-burning and healthy to eat them.

If you find the thought of adding extra oil to your meats nauseating, then rest assured you’re not the only one. It takes a bit of getting used to, and it might help you mentally if you start with adding more olive oil to your salads or to try cooking your meats in coconut oil.

In fact, Dr. Eades recommends eating more fat as a way to “reduce the time spent in low-carb adaptation purgatory.” Since fats are more calorie dense than other macronutrients, it’ll also help with increasing your calorie intake (which is reason #2 – see above).

SOLUTION: Try this Ultimate Paleo Coffee (ghee and coconut oil blended with coffee) or try to make sure you pick fattier cuts of meat (go for the ribeye instead of the filet). If you’re eating low-fat meats like chicken breast, then add extra cooking fats (like olive oil, coconut oil, ghee) to it.

REASON #4: Exercising Too Much

As you can imagine, exercise expends energy and if your body is barely producing enough to keep you standing, then it’s going to have practically no energy left if you exercise.

SOLUTION: Curb back your exercise regimen when you first go Paleo in order to become adapted first. Or, eat more Paleo carbs initially.

REASON #5: Not Taking In Enough Salt 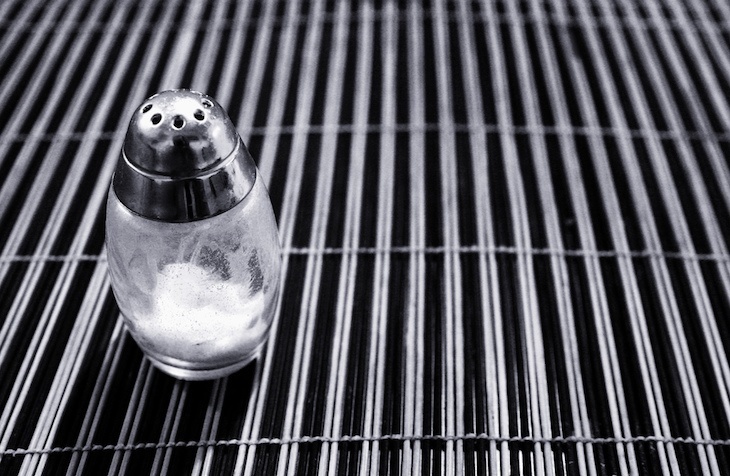 This is probably a shocking thought as we’re frequently told that we eat too much salt (just think how popular the DASH diet is), and the original Paleo diet as prescribed by Dr. Loren Cordian recommends low salt consumption.

However, the fact is that when you go on a Paleo diet, you end up removing many high-sodium processed foods, so you may not be eating as much salt as you need to. So, why would not eating enough salt on a Paleo diet make you tired?

Dr. Westman explains that: when you go low carb, your insulin drops, which makes it harder for you to retain salts. In fact, he further speculates that the reason why you might feel better when you add back some extra carbs to your diet is because of the salt retention properties of insulin.

Going low salt for a long time could also be problematic for your thyroid. When you eliminate table salt, which is fortified with iodine, from your diet, many people end up not getting enough iodine. A deficiency in iodine can lead to your thyroid malfunctioning, which can cause you to feel really tired. (As an aside, if you’ve been feeling really exhausted for a long time, then you might want to get your thyroid function tested.)

SOLUTION: Add sea salt (or real salt) to taste to your food, and get some extra iodine from seaweed (you can even buy roasted seaweed snacks).

Paleo is a lifestyle, and sleep is highly valued as part of that lifestyle. Many of us are so used to staying up late (to watch TV, drink) that getting sufficient sleep is a thing of the past. In fact, people 100 years ago used to sleep 2 hours more per night than us on average.

While it’s pretty likely that you didn’t sleep enough before starting Paleo already, more sleep is something you always want to keep in mind.

SOLUTION: Sleeping more is the obvious solution, but of course, just saying that doesn’t mean you can get to sleep. So try these tips for getting to sleep faster and getting better sleep: drinking less caffeine, switching off electronics a few hours before bed, and not drinking any alcohol in the evenings.

Conclusion: Why Do I Feel So Weak When I Start A Paleo Diet?

I’ve listed 6 possible reasons why you might be feeling weak or lacking in energy when you first start a Paleo diet. The most likely reason is #1, carb flu. So, try adding in more clean carbs (like sweet potatoes) and some healthy Paleo fats into your diet. Or else start Paleo slowly (check out this article on how to start a Paleo diet for ideas on how to start Paleo slowly).

Looking To Start A Paleo Diet?

If you’re looking to start a Paleo diet, then a great way to start on the right footing and with plenty of support is to join our free 7-day Paleo Challenge. Just click the button below to join.