Why Soy is the Worst Kind of Legume

If there is any legume I’d avoid above all others, it would probably be soy (with peanuts being a close 2nd). For why you should be avoiding all legumes, read this article.

If you’re unfamiliar with soy, it starts off life as a cream-colored bean, which can then be made into a variety of foods like tofu, soy milk, soy protein, tempeh, soy sauce, imitation cheese, etc. It’s popular in many Asian dishes and among vegetarians and vegans as a protein source.

There are a variety of reasons for why soy should be avoided: 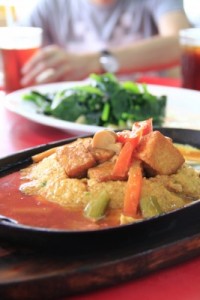 First, when you eat soy, you typically aren’t just eating the bean itself. Most of the time, you’re eating a processed form such as tofu or soy milk, where the toxins have been concentrated and amplified.

Soy products are a huge source of lectins, phytates, and particularly phtyoestrogens, which cause all sorts of hormonal problems.

For men, this can often lead to “man-boobs” and infertility, and for women, it can also mean infertility as well as menstrual problems, as well as a host of other problems, such as bladder cancer, asthma, and increased incidence of Alzheimers. (See this article for more studies and side effects.)

The impact on infants who are fed soy formulas can be even worse and more devastating.

Moreover, soy can also lead to faster brain deterioration. It’s unclear whether this effect is caused primarily by the phytoestrogens in soy or the fact that many people who eat a lot of soy don’t eat enough good sources of B-12, such as meat.

4. Soy in the US is Mostly GMO

In addition to everything else, almost all of the soy in the US is GMO.

I just stumbled across this article. Is edamame a bad choice? I eat a lot of frozen edamame beans, and I love edamame in Asian restaurants. Thanks!

Edamame, of course, is a soy bean, so it’s not ideal. However, I don’t think that any legumes (soy included) are so bad that eating a few of them once in a while would be a problem for most people.

If you have a lot of digestive issues, I’d be more strict about avoiding legumes. Soy has extra problems, like phytoestrogens, but that doesn’t become a problem unless you’re eating a fair amount of soy.

In other words, most people could eat edamame once a week without any issues, but I wouldn’t do it all the time.

Great! Thanks for your reply!

Be sure it is made from FERMENTED soy. Anything unfermened be it edamame or tempe or soy souce is not good for your health.

Soy sauce is actually traditionally fermented for a very long time. Not always the case with modern soy sauces, though.

Hello I don’t agree with your article. You said that soy is not good for health but can you tell me why japaneses eat a lot of soy product like and they have the best life expectancy? I’m curious to know…

Soy isn’t the worst thing you can eat, by anyone’s estimations. Processed sugars, seed oils, and gluten are all way worse.

When you ask a question like “Why is [Group X] so healthy despite doing [Bad Thing]”, it misses the point just a bit. If they’re doing the great majority of things well (not eating other toxins, sleeping well, eating nutrient-dense foods, etc.), then they’ll be healthy despite doing one thing that’s not ideal.

In the case of the Japanese, they do a lot of things well. This is a generalization, but they eat a fairly nutrient-dense diet (often with seafood and veggies), their sugar consumption is not that high, Omega-3 to Omega-6 ratios are excellent, etc.

And on average, they eat about 8 grams of soy protein per day. Based on what we know about nutrition, that’s not ideal, but it’s not going to kill people off at a rapid rate.

No group of people in the world eats an ideal diet or lives an ideal lifestyle, even if there is such a thing. What you’re looking at is a comparison against other countries (like the US) that do a lot of other things much worse than Japan in terms of diet and lifestyle.

I understand your point of view, but I look the facts. If you show me a person who does paleo diet and lives 110 years like in Okinawa and you tell me this is the best diet, I will trust you. But at the moment I haven’t seen it in my search. The best diet for me is Okinawa diet and they eat soy products and they almost don’t eat meat. So I tell you soy products are good and meat is bad.

Your explanation though very good, lacks an important point. Soy that is mostly consumed in Asia, in countries like Japan and China is FERMENTED. Fermentation is a process of soaking soy beans, this is a very long process from 3 months to 3 years. The 3 years fermented soy is most expensive and healthy. Soy that is used in western countries is UNfermented, because everybody is concerned about the money and soaking for such a long period is not profitable.

This was mostly true in the past, and I haven’t researched it for statistics, but after living in China for a while, I’d say that it’s hardly true at all any more for China. From tofu to soy sauce, most of the soy I see consumed here (in China) is not fermented at all. Unfortunate, really, since you’re correct that is much more digestible and healthier.

Well, I suspected as much. Faster production brings more money. Who cares about health anyway… But this is a good piece of information, thank you.

Hi
I’d read The article With great interest, i’d like make you a question, although i think is redundant. Once a week i eat soy beans take them directly from The shell, it means they’re still greens. Is it better or worse for The palio point of view?

Also, the majority of soy consumed in other places (outside US) is fermented which helps to neutralize the toxins it contains…