You Can Always Justify Eating Crap 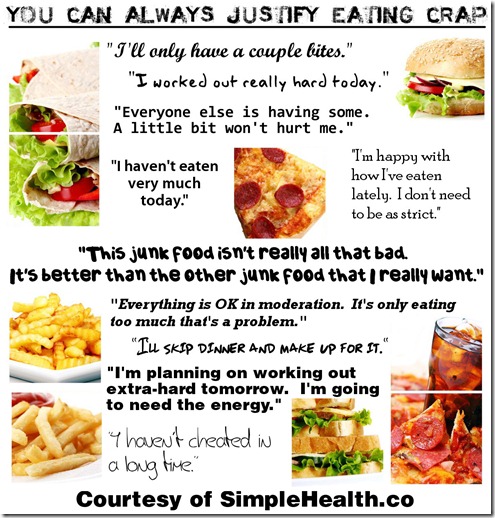 YOU CAN ALWAYS JUSTIFY EATING CRAP

I know.  I’ve been there.  I’m still there sometimes.

Bad news: Most of us are NEVER going to completely get over this.  There will still be times when we justify eating crap.

Good news: This doesn’t need to happen very often.  There are ways to fix ourselves.

1. Know that You’re Going to Try to Justify Eating Crap

We justify eating crap when we do it, and we justify it after we’ve eaten crap.  We’re hard-wired that way (see study).

The most important thing that any us can do is to acknowledge and accept that our brains are always going to try to justify eating crap.  Once we accept that this is going to happen, we can become more aware when it’s happening.

The first step is just to know that you’re always going to come up with some justification.  Don’t fool yourself and think that you’ll avoid those justifications next time.

Acknowledgment is the first step, but it won’t get you very far.  That’s why I implement these next 2 tactics:

This is one way to become hyper-aware of your justifications: 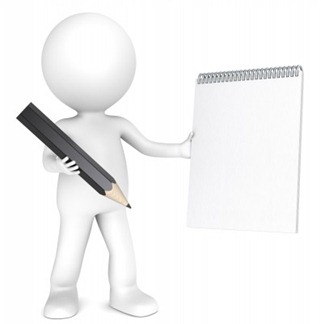 Every time you cheat on your diet, write down why you’re cheating.

Let me warn you, this is not easy or comfortable.  It sounds so easy just to jot down one sentence every time you cheat.  It’s anything but easy.

You will face massive internal resistance to writing these justifications down, because a part of you knows that they’re pure crap.  In fact, if you engage in this tactic, you’ll cheat way less just so that you don’t have to write down your terrible justifications.  But that’s not even the point.

Should you go back and review the reasons you cheat?

No.  Honestly, after you’ve written down 10 or 15 reasons, you’ll automatically recognize patterns.  And that’s when the magic happens.

Personally, whenever I hear myself start making any of the justifications I listed above (or any variation), I immediately recognize that this is just a temporary justification with which I probably won’t agree tomorrow.  I still give in to the temptation from time to time, but not very often.

This is absolutely key.  Here’s the deal:

Once your brain starts trying to justify eating crap, it’s hard to resist eating.  However, if you have something available that is not crap, it’s often possible to eat that instead.

You should know what your primary triggers are for cheating.  If you don’t, then figure that out.  Always know when and why you’re most likely to cheat. 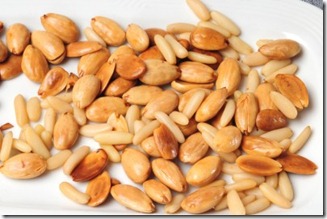 When you have something to eat, it makes it light-years easier to resist eating the crap.  It boggles my mind why more people don’t plan for this.

For instance, when I travel, I always take food with me to eat.  I can fast for certain periods of time, but I know that when I’m tired and at the airport with loads of crap just a few steps away (and no healthy options), I’m going to end up eating badly.  The only way I avoid this is to have other food available.

This applies to every part of your life.  If you eat badly in the afternoon at work, then make sure you have something healthy to eat.

I can’t emphasize enough how this will change your life.

We don’t actually think about most of the things we do during the day.  Your goal is to make sure that you start integrating good eating into those actions you don’t think about.

Personally, I often eat the same foods on a daily basis.  When I get hungry around lunch, I don’t really think about what I’m going to eat, because I’ve already prepared my meal.

On the occasions when I haven’t already prepared my lunch, I’m about 25% more likely to make a bad decision (I’m not kidding – I’ve measured it).

There are a variety of habits you can put in place, and half the articles on this site are about how to create permanent habits.  The primary things to remember are to only work on one habit at a time and to start incredibly small.

In terms of eating, I’d highly suggest you first come up with a good breakfast habit.  One that I suggest is to commit to eating one hard-boiled egg every morning.  I don’t care what else you eat, but commit to eating just one egg per morning.

Eggs are incredibly nutritious and easy to boil in advance and then refrigerate (at least for a few days). 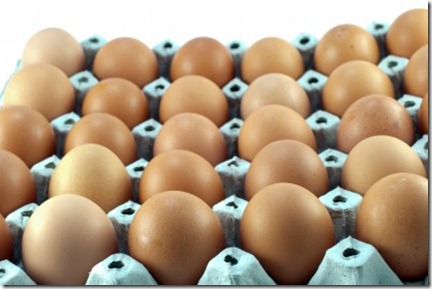 There’s really nothing to remember other than that you can and will always justify eating crap.

The sooner you understand, accept, and prepare for that fact, the quicker you’ll be able to do something about it.  And really, is eating crap something you’ve ever been proud of?

Got other suggestions for how to avoid justifying bad eating?  How do you justify it to yourself?

“I’ll only have a couple bites.&qu
ot;

“Everything is OK in moderation. It’s only eating too much that’s a problem.”

“I’m happy with my progress lately. I don’t need to be as diligent.”

“I worked out really hard today.”

“I haven’t eaten very much today.”

“I’ll skip dinner and make up for it.”

“I haven’t cheated in a long time.”

“I’m planning on working out extra-hard tomorrow. I’m going to need the energy.”

“This junk food isn’t really all that bad. It’s better than the other junk food that I really want.”

“Everyone else is having some. A little bit won’t hurt me.”