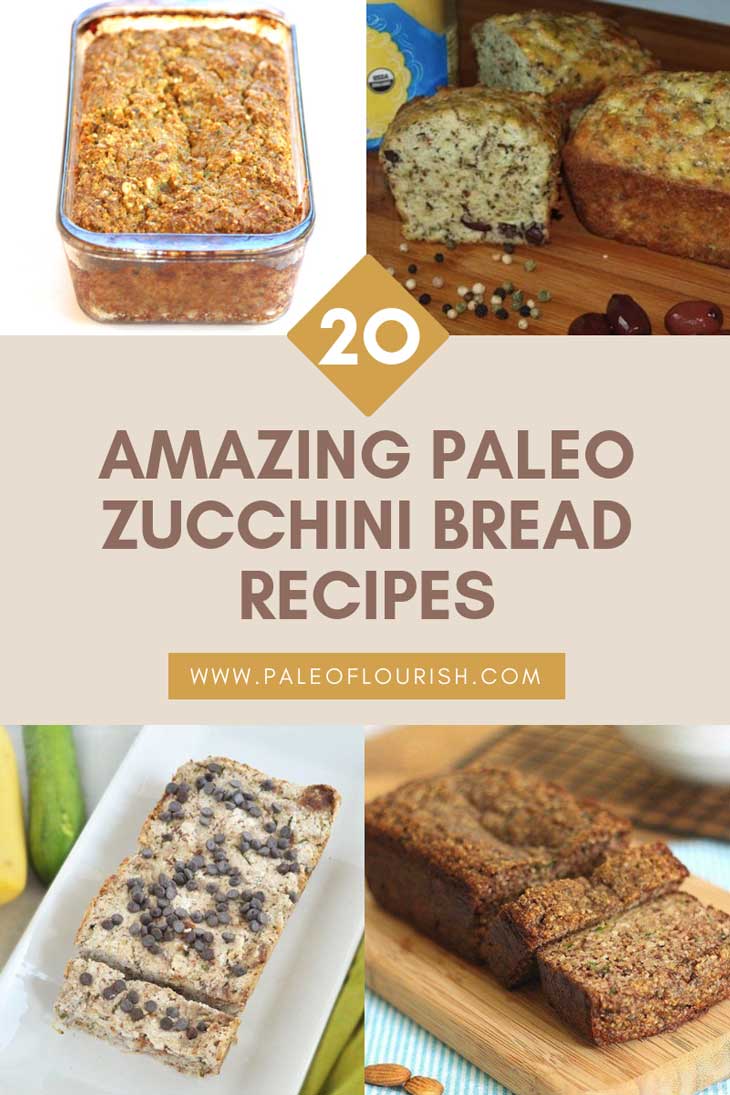 If you haven’t yet heard of Paleo zucchini bread, you may be living under a rock (or in a cave – Paleo pun intended). Zucchini is the perfect addition to Paleo bread that makes it softer, moister, and increases the healthy factor.

And don’t be discouraged if you don’t like the flavor of zucchinis; it blends in perfectly and enhances the other flavors and ingredients, giving the texture a boost in the process. So try one (or all 20) of these amazing Paleo zucchini bread recipes now!! 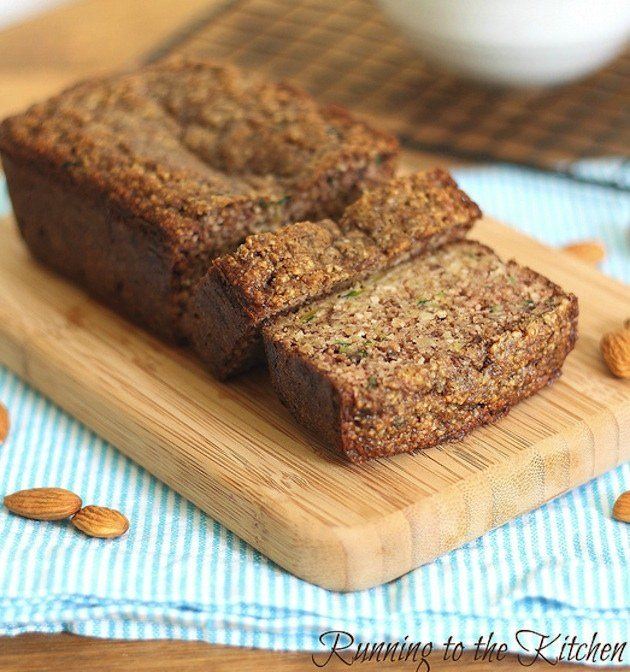 Gina’s “mistake” turned out better than she ever expected. She realized while grinding her own almond flour that leaving it a little on the chunky side made for a crunchy, tastier bread that harmonizes perfectly with the moistness that the zucchini provides. It’s slightly sweet with banana and a bit of maple syrup mixed in as well. (Image courtesy of Gina; check out more great Paleo recipes at Running to the Kitchen.) 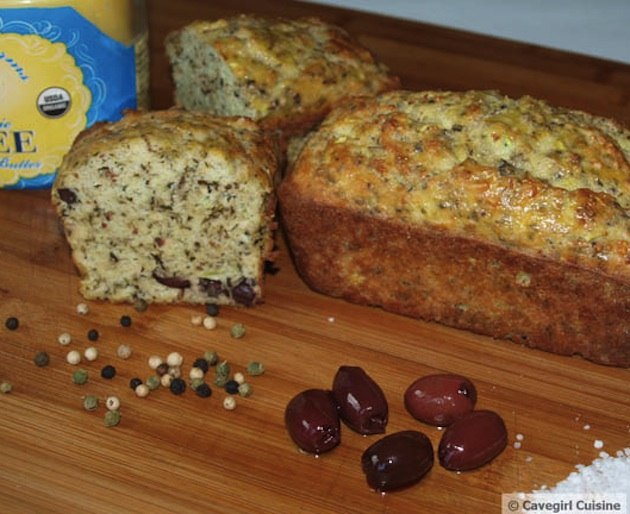 In contrast to the previous recipe, this one is definitely not for those trying to satisfy their sweet tooth – it’s probably the most savory one in this list of Paleo zucchini bread recipes. The Dijon mustard, olives and herbs de Provence make for quite a range of European flavors! And we love the recommendation for cooking it in muffin tins- that way you can take one on the go or bring a batch to share with your colleagues at the office – they will thank you! (Michelle gave us special permission to reproduce the image from her blog Cavegirl Cuisine.) 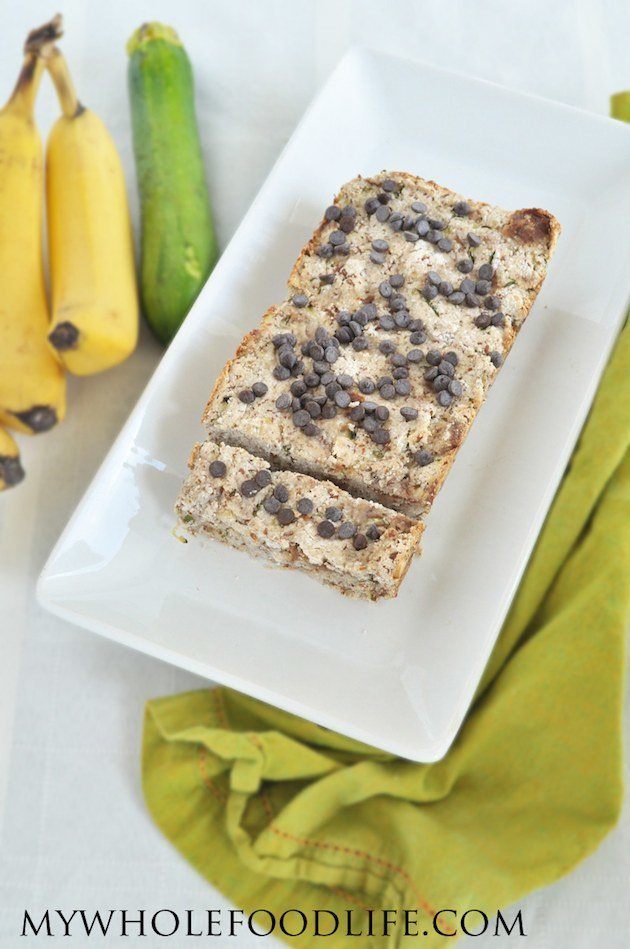 This recipe has a relatively small list of ingredients and two thumbs up from me for catering to the potential egg- and nut-allergic people! Way to go! Melissa gives instructions on how to make a flax egg, which is a great substitute which I am ashamed to admit I never heard about until now. Pitted dates act as a natural sweetener. (Photo credit goes to Melissa from My Whole Food life; thank you!)

They say that third time’s the charm, but sometimes, first time’s the charm. One of her first and more frequent go-to recipes, chef Vivica whips up this savory Paleo zucchini bread in just 20 minutes! So many healthy ingredients here – yams, zucchini, hemp seeds, sunflower seeds, and many more! But beware if you have egg allergies, as egg is an essential ingredient in this one (6 eggs per loaf).

Stephanie, Fit and Fresh blogger and Crossfit lover, made this delicious pumpkin zucchini bread with pumpkin purée. The baking time is short – 30-35 minutes; almost half the time of several other recipes on this list. But if you don’t have pumpkin purée on hand, you just might have to steam and mash up your own, which could be a bit more time consuming (but worth it if you love pumpkin as much as I do).

This primal zucchini bread recipe seems pretty solid; what sets it apart from the others is the use of arrowroot powder. This recipe actually seems like a good medium between savory and sweet, and it’s up to you how much agave syrup (not considered Paleo) or other forms of sweetener you wish to include.

This one is definitely on the sweeter side of the spectrum, using bananas, a greater amount of maple syrup and also coconut sugar.

This one sounds positively scrumptious! Coconut milk AND pumpkin pie spice?! Personally, I’m planning to go stock up on pumpkin spice and try this one out ASAP.

For friends of Primal only, this recipe uses raw milk butter and doesn’t offer a strictly Paleo alternative. If you don’t have a dairy intolerance and aren’t strictly Paleo, I’d say this one sounds pretty delicious.

The Small Footprint Family does this delicious Paleo zucchini bread recipe in muffin tins for easy transport and also gives some great tips on preserving zucchini for use on future zucchini breads and other recipes. Good to know!

Kelly had an overabundance of zucchini from her garden and put it to use. Nothing quite as satisfying as fresh, home-grown veggies! She makes it super-fast in a blender and includes dates as the source of natural sweetness, so there’s no need for honey or maple syrup. After months of watching her zucchinis grow, she blends up this batter in just 5 minutes and has it ready for this delicious bread! I love it.

Well, I have a few things to say about this recipe. It has some advantages and disadvantage. I LOVE the cherry idea; I love the taste of cherries and if it’s not the season you can always use frozen ones. I love how Lori puts the walnuts on top for a great decoration. My only qualm is about using NuNaturals Baking Blend as it does contain some non-Paleo ingredients like Maltodextrin.

This simple recipe is simply delicious. At Against All Grain, their specialty is making good non-grain alternatives and this one is no different.

Deb is an Aussie with an aim to help others like herself- sufferers of Crohns disease who have turned to SCD and Paleo lifestyles for relief. To that I say, good on ya, mate! I was confused by her ingredient of mixed spice but then I saw in the comments that she explains it – it’s a common spice blend found in Australia made of cinnamon, nutmeg and allspice. Great to have that clarified! Now I’m gonna go try this one!

Despite the zucchini base, this zucchini bread is sweet as pie, and full of delicious spices to boot (cinnamon, nutmeg, cardamom anyone?!) This reminds me of a banana bread recipe I love… bananas are also in the mix here, as well as my favorite additions to a sweet loaf: walnuts and chocolate chips (optional, of course).

Taking it up a notch on the chocolate scale, Adriana of Living Healthy with Chocolate sets this Paleo zucchini bread apart with cocoa powder and ½ cup of chocolate chips! It’s quite a sweet loaf, with hints of vanilla and honey as well. Sounds like a perfect dessert or teatime snack!

While the original recipe uses hazelnut butter blend (just the sound of it makes me mouth water), Halle recommends an alternative that is strictly Paleo– sweetened almond butter. Either way, it’s sure to come out tasting amazing!

This sweet Paleo zucchini bread recipe is great for those that can’t eat nuts, but sunbutter may be a hard-to-find ingredient depending on where you live.