It was Lunar New Year last Sunday, so this “rice” recipe is sort of timely. Rice is a huge part of many Asian cultures, and I’ve actually had quite a few Asian friends proclaim that they couldn’t ever go Paleo because they would never give up rice.

Well, if you’re a rice fanatic, this cauliflower rice recipe will be a tasty and satisfying non-grain alternative. Even several of my non-Paleo friends admit that this dish is pretty delicious despite being made almost entirely out of vegetables (in fact, you can omit the eggs and make it vegetarian)!

For another version of this Cauliflower Fried Rice recipe, check this one out.

I was first introduced to the amazing concept of a no-grain rice by Nom Nom Paleo (her cauliflower fried rice recipe is here). It’s since become a favorite of mine! And if you don’t already follow her, then you’re seriously missing out!

So, here are step-by-step photos to guide you through this recipe: Start with a head of cauliflower – this makes a really large pot of cauliflower rice (4-6 bowls). 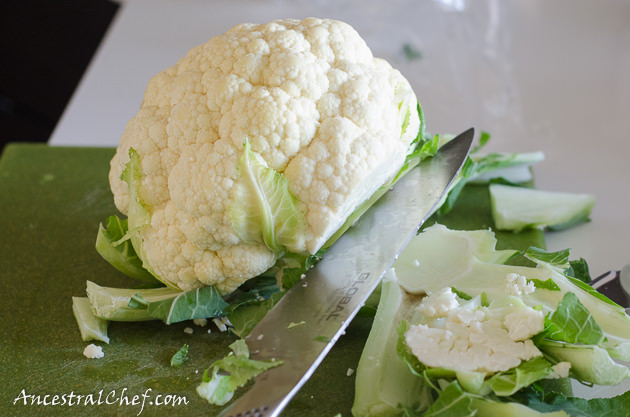 Chop off the stems from the cauliflower and chop the florets into smaller pieces. Place into the food processor with the blade attachment. 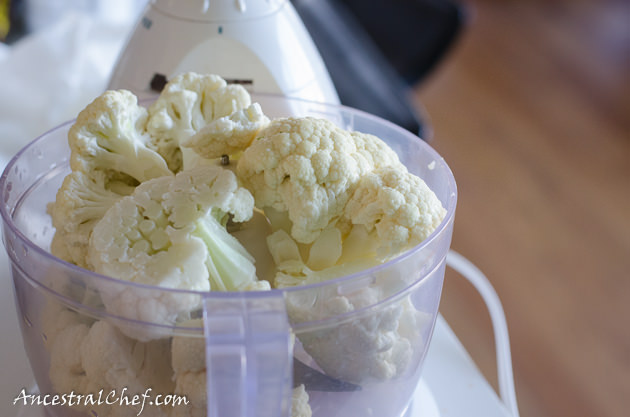 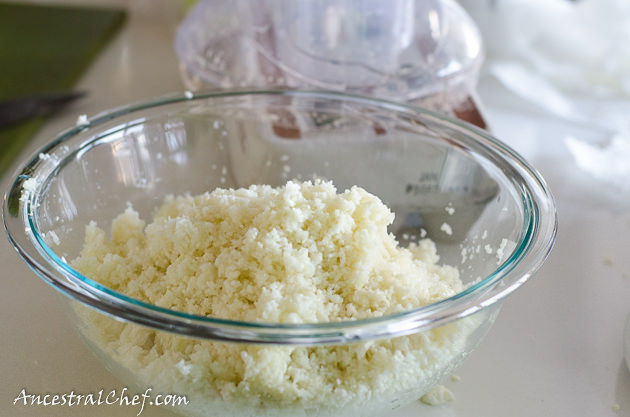 You can actually just cook this by itself, but I like to flavor it with a few other veggies and eggs (pot roast is another good addition that I’ve added in before). While I have the food processor out, I will use it to chop up an onion. 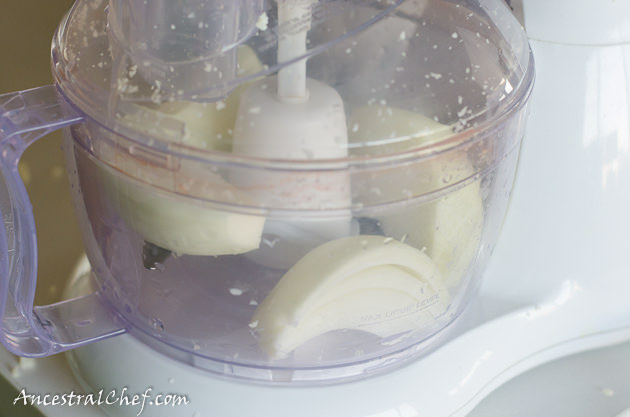 And also a green jalapeno pepper and a red bell pepper (to add some spiciness and some color), although you could substitute with other vegetables. 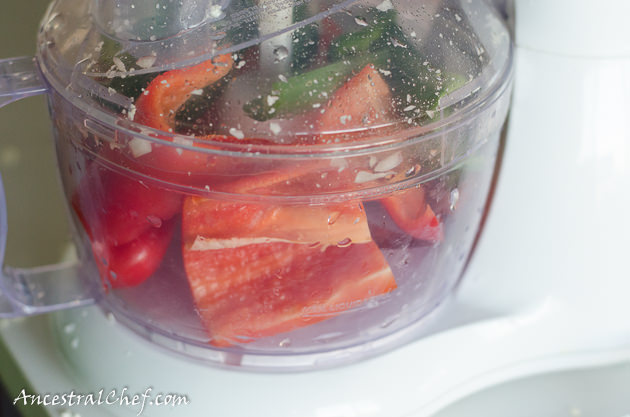 Saute the onions first in a bit of coconut oil – make sure you really squeeze all the water out of the onions before putting them into the pan. 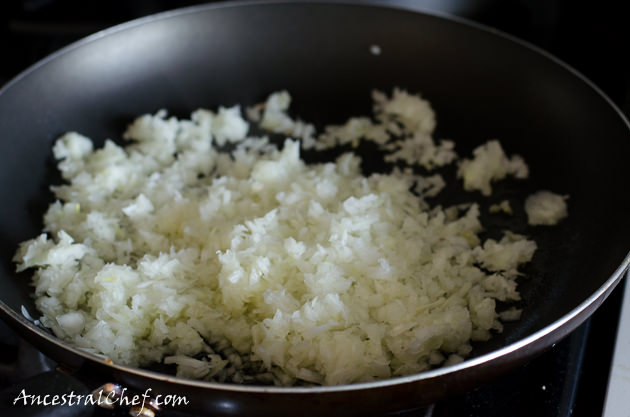 Then add in the peppers (or other vegetables) – again, squeeze all the water out (this prevents you from getting soggy rice). 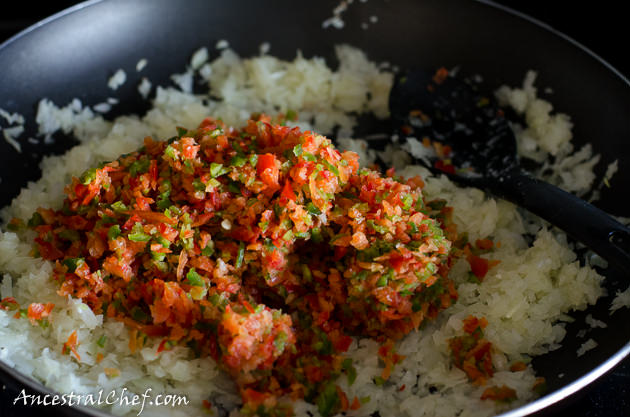 Meanwhile, whisky 3 eggs together and make an egg pancake in a pan with a bit of coconut oil. (You can just scramble the eggs if you want, but it’s best to not have the egg bits clump together, which often happens in scrambled eggs.) 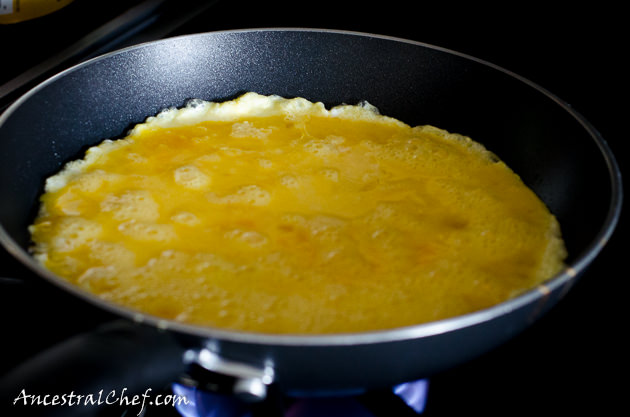 After the egg pancake is pretty solid, break it up into small pieces. 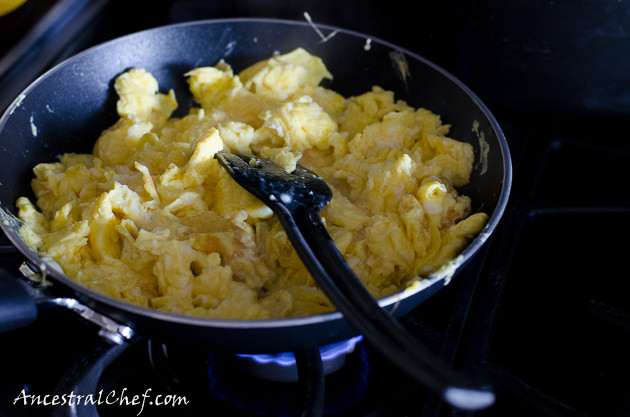 Now, add the cauliflower “rice” florets (again, squeeze all the excess water out) and the cooked eggs to the onions and peppers. 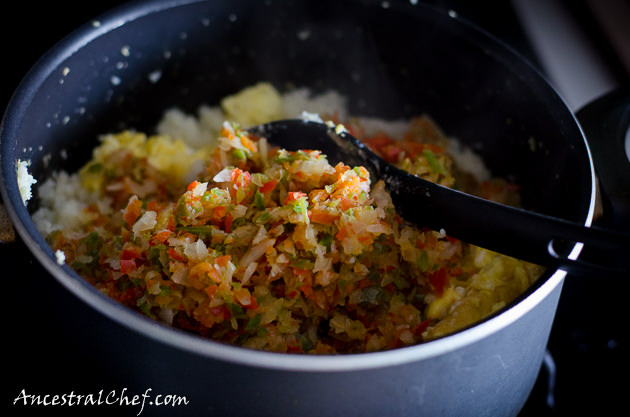 Cook it for around 5 more minutes (you can cook it for longer if you want softer “rice”) and add in your spices (I typically just add salt and pepper with occasionally a dash of coconut aminos (or soy sauce)). 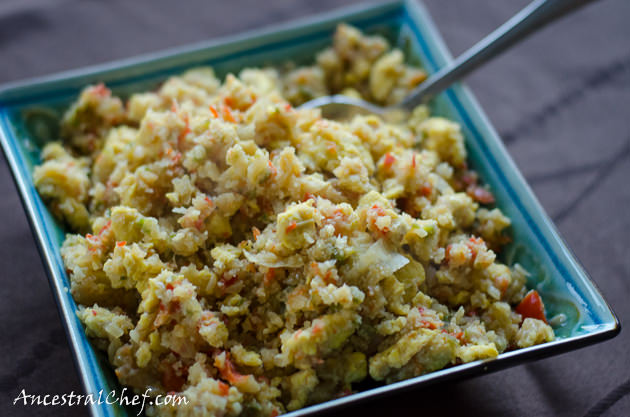 This is so innovative! Never thought to use cauliflower in place of rice before. I love fried rice and this seems like a really healthy alternative.

Thanks Mallory – I first heard of cauliflower rice from reading Nom Nom Paleo! It’s such a great idea!

This recipe is fantastic! I will be using it as a staple side dish when I have my non-paleo guests for supper. So flavourful and satisfying, I love your site.

Loved this cauli-rice Louise. I made some minor alterations. I left out the soy sauce as I had none that was gluten free or paleo, but added a good squeeze of lime juice and a large handful of fresh coriander. Served it with Kelly Bejelly’s Ginger Chicken. Superb. Thanks for a great recipe to be build upon.

Thank you Louise, I’,m definitely going to try this. I made Cauliflower Rice to go with a chilli I made, I fried the Cauliflower Rice with onions & added smoked paprika, a dash of salt & plenty of pepper 🙂 even my non palio friends said it was tasty 🙂