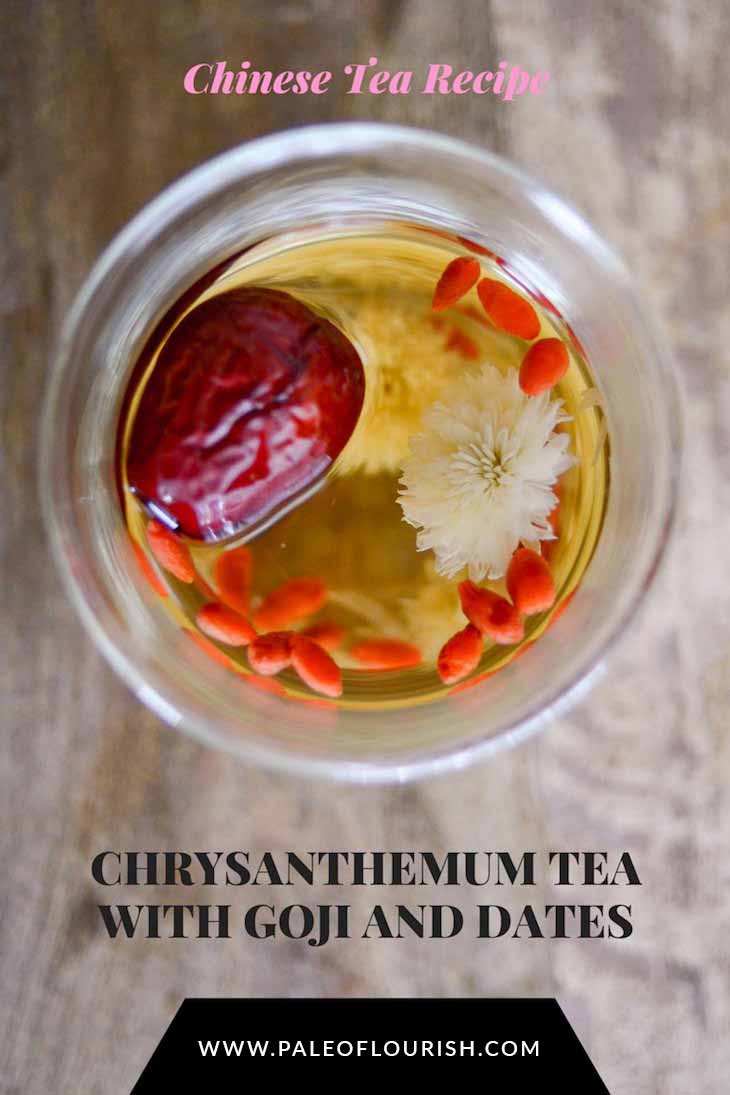 This is a traditional Chinese tea made with chrysanthemum flowers, goji berries, and dried red dates. Traditionally, this tea is sweetened with rock sugar, but you can drink it without any sweetener or use honey instead.

If you have trouble finding dried red dates, then they can be omitted from this recipe.

What are chrysanthemum flowers? 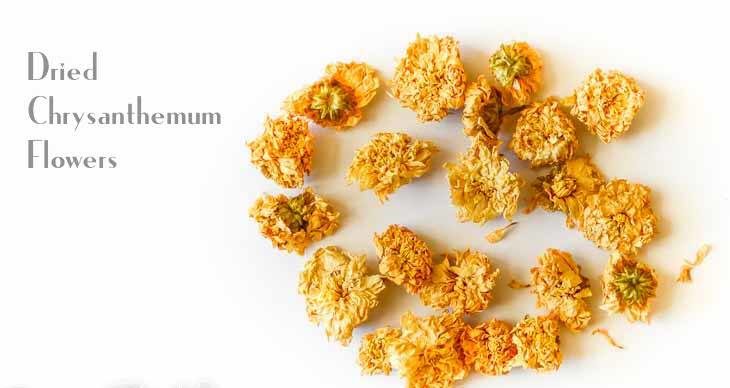 Chrysanthemums (also known as ‘mums’) are a very popular flower and are often considered the “Queen of the Fall Flowers.” They look great in floral arrangements or by themselves.

But what many people do not realize is that mums have been used in Asian cultures for centuries for its potential health benefits.

And it’s not just the flowers that are special. The roots and leaves of the chrysanthemum plant are also used in Asian cultures – boiled as a drink or stir-fried or steamed to eat as a dish. In particular, the leaves can be eaten raw or barely wilted in salads with or instead of dandelion or kale. They taste similar to mustard greens with a slightly bitter flavor.

On the caution side, although somewhat rare, some people are allergic to chrysanthemums. Caution is advised when using fresh flowers if you suffer from seasonal allergies as it may make them worse. If you’re pregnant or breastfeeding, then you may also want to consult your doctor first before trying them.

What are goji berries? 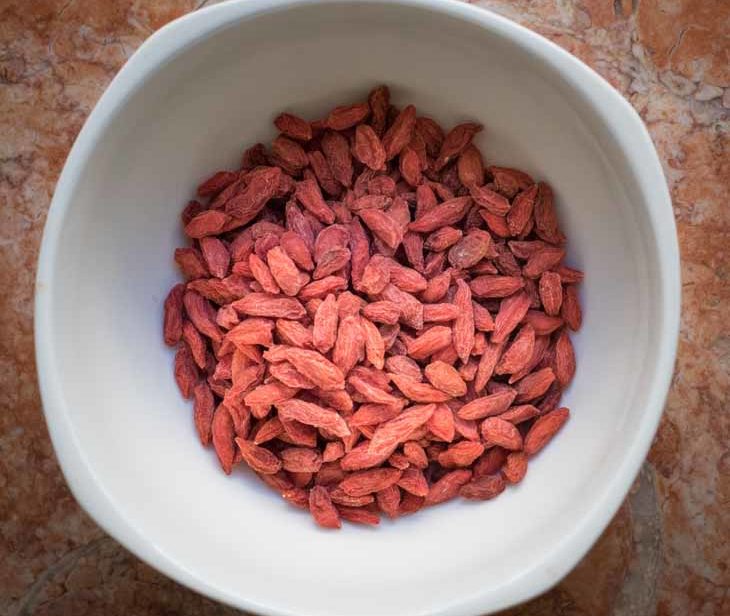 These tiny little red berries (also known as wolfberries) are considered an herb and a fruit and originated in Asia, specifically China. Many consider goji berries to be a superfood due to their potential health benefits (like as a diabetes aid and reducing high blood pressure although there has been no good proof of these claims). But while goji berries definitely do have some good stuff in them (like very high vitamin C and iron amounts), they’re still not a replacement for actually living a healthy lifestyle!

There are tons of different ways of using goji berries if you want to give them a try like in smoothies, in soups, in baked goods, on their own, or in teas like this recipe here.

What are dried red dates? 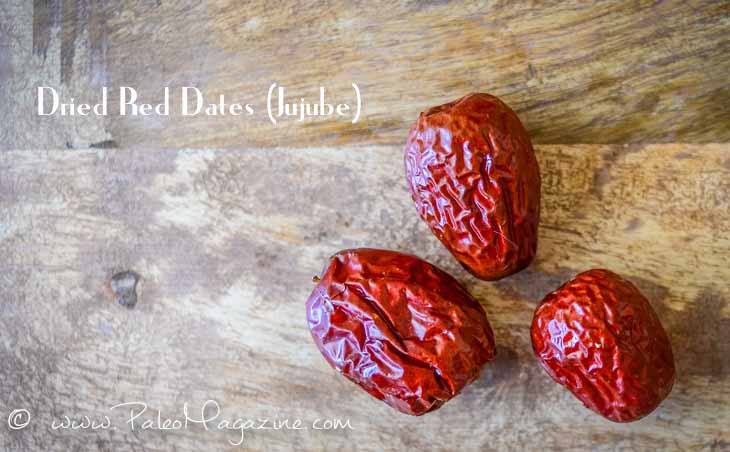 Red dates, or jujube fruit, has been cultivated in China for the past 4000 years.

Red dates come from the date palm tree and are a reddish color with a sweet taste. Date sizes vary from a small grape to a large strawberry, and they have a seed in the middle. They can be eaten either fresh or dried, depending on the variety and ripeness. When eaten fresh, they are crunchy and not super sweet or tart (they taste and look a bit like a crab apple). When dried, they are often much sweeter in taste and slightly chewy in texture.

While red dates are fairly nutritious, they are high in sugar so you might want to avoid them if you have blood sugar issues.

By placing all these nutritious foods into one tea, you boost up your vitamin and mineral intake just by drinking the tea. It’s great for the cold months but you can also ice this tea when it’s hot. I prefer to keep it sugar-free, but if you want, you can add some honey or stevia (or rock sugar for a more traditional drink). 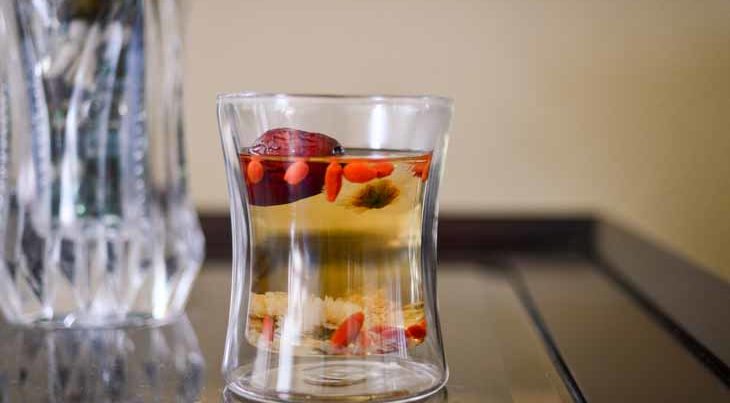 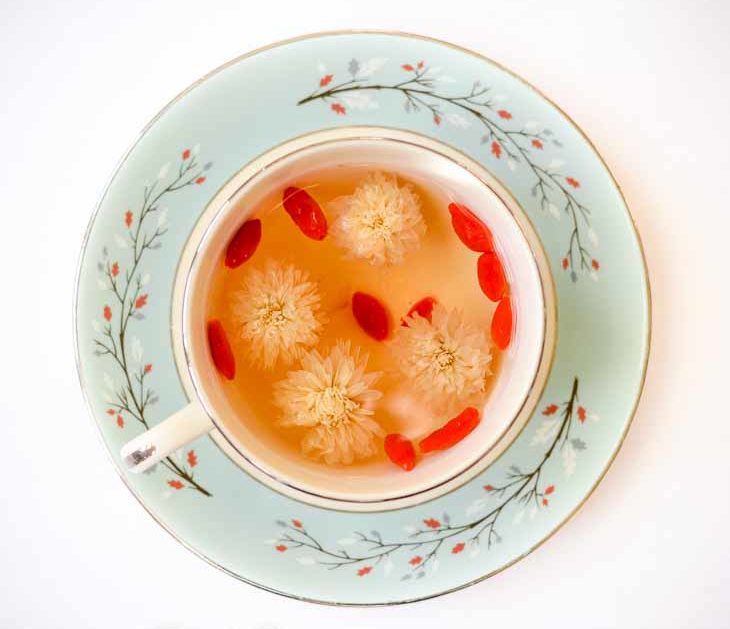