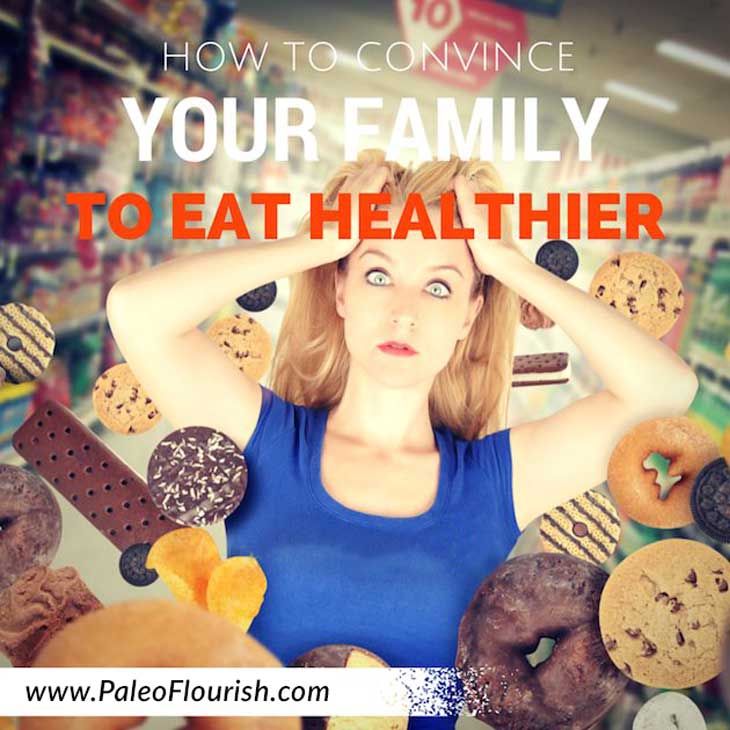 Getting healthy, losing weight, and sticking to a diet of real food – these tasks are difficult for most of us in the best of circumstances.  However, if you’re also struggling to either convert or just gain the support of your spouse and/or kids, then everything suddenly seems a lot harder.

Have you ever wondered how much easier it would be if your entire family was actually excited about making better and healthier food and lifestyle choices?  What if it were your entire family and all of your friends?  How easy would it be in that case for you to make better choices and decisions about your health?

I’m here to tell you that not only is that situation possible, but I’ve seen thousands of people do it.  And most of those people started out thinking that their families were too stubborn, too unsupportive, or just too lazy to ever care about their health.

And even though everybody’s situation is different, you can use the same approach to get your family on board with eating and living healthier.  There’s a formula for how to do it.

My wife, Louise, is a very successful health author, blogger, and speaker, and she runs one of the 2 magazines that we own (Healthy Recipes Magazine).

When you read that, you might be thinking, “Wow, Jeremy was really lucky to find someone who is so excited about and interested in health.” 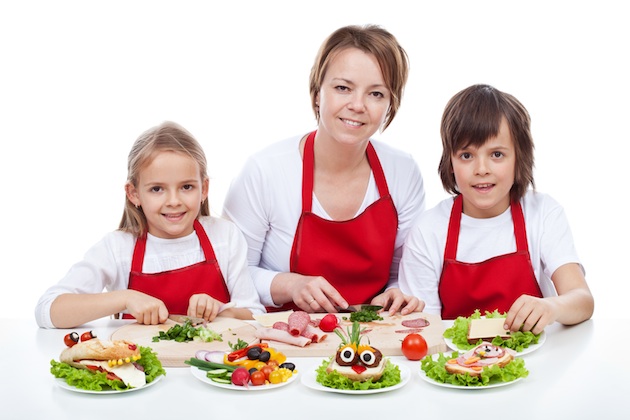 And I am very lucky in uncountable ways when it comes to Louise.  However, for the first 7 years of our relationship, she was less interested in nutrition, health, and diet than anyone I knew.  She’d never been overweight, and even though she had some health issues, she was in no way motivated to change her diet and lifestyle.

I, on the other hand, had always been the chubby kid.  For the most part, that meant that I’d spent much of my life trying to lose fat and get in better shape.

I still remember being 7 years old and wondering why I couldn’t run as fast as all the other kids with whom I played sports.  That’s one of the first times I remember feeling fat, but certainly not the last or the most painful.  Throughout high school and college, I rarely dated anybody because I was uncomfortable enough with my own body that I was sure nobody else could possibly like me.

At this point in my life, I realize that the way I pictured myself was actually much worse than how I actually looked to other people.  However, because I believed that I was too fat, it frequently stood in the way of me developing meaningful relationships.

By the time I met Louise, I had lost some weight, but I was still struggling.  No matter how hard I worked out or dieted, I inevitably ended up gaining most or all of the fat back that I’d lost.

About 4 years after Louise and I first started dating, I made a decision to radically change the way I ate.  If you already know or follow me, then you probably know that I’ve been following what is essentially a Paleo diet since that time.  And it’s one of the best decisions I’ve ever made with respect to my body and my health.

But it wasn’t easy at first, and part of the difficulty is that Louise was in no way on board with the decision.

Louise has always been supportive of me in general, but that certainly doesn’t mean that she’s liked every decision that I’ve made.  Far from it.  I make a lot of mediocre or just plain bad decisions.  Cleaning up my diet and lifestyle were excellent decisions, but I definitely didn’t approach it in the best possible way.

In general, I made the decision to clean up my diet and change how I ate, but I didn’t include her at all.  I didn’t ask her what she thought about the decision, and worse, I didn’t even invite her to help me.

To the contrary, I simply told her that I was going to start eating differently, and that she was welcome to eat the same way as me or else she could eat whatever food she wanted to buy/prepare/cook.  This is a bad way to implement any change, much less one that drastically affects the person you’re living and sleeping with.

Every day, I would decide what I was going to eat for breakfast and dinner (I ate lunch at work), and I would ask her if she wanted any of what I was going to have.  Many times she would acquiesce, but as time went along, I realized that she was getting angrier and angrier that we were often not even eating together and that I was essentially forcing her to eat the food that I was cooking (which, admittedly, wasn’t very imaginative or flavorful at that time).

Let me stop here for a moment and state the obvious.  If anybody (friend, family, enemy, whoever…) came to you or me and said that we can either start doing things their way or else fend for ourselves, then you and I would probably be pretty unhappy with that sort of ultimatum.  We’d likely react negatively and defensively toward that sort of proposition.

So it’s no wonder that Louise reacted this way.

In the end, we had MANY fights over food.  And it lasted for years – I’m not exaggerating.  But Louise now buys into these changes as much or more than I do.  And that’s not by chance or just because I pressured her for long enough.

There wasn’t a single day that everything got better, but I do remember lying in bed one night and finally telling Louise 3 things that I’d surprisingly never told her before.  First, I told her why it was so important to me to try to change my diet and lose weight.  I explained what it meant to me.  Secondly, I told her why her support was so important to me.  I explained how her support was the thing that made it all easiest for me, not to mention much more pleasant.  And finally, I told her how I most wanted her to help me out.  Literally, I listed 5 things that I knew would make everything a lot easier for me.

Now…I want to tell you that everything changed the next day.  And a lot did.  But it took another month or so, with several more conversations, before Louise and I were on the same page.  And it wasn’t solely a result of me telling her what was important to me.  She also started telling me specifically what would make it all easier for her.

Within a month, though, we pretty much never fought over food or diet.  And within a year after that, Louise actually decided to try a diet that she thought was crazy for years.

What I Was Missing

During the years when Louise wasn’t very supportive of my diet, I routinely blamed her for making it harder for me, but I also felt like I was imposing on her.  When we’d go out to restaurants, I felt like she always had to give in to wherever I wanted to go, just because my diet was more limiting.

And I know that I’m not the only one who feels that way.  I’ve talked to thousands of people who have the exact same sentiment, and you likely have felt one or both of those feelings in your own life.

It’s not that those feelings are correct or not correct.  The problem is that by thinking that way, we automatically cast everything we do and say in that light.  For instance, by feeling like I was imposing on her, I’d constantly apologize for making her go to only the restaurants that I wanted to go to.  And while apologizing certainly isn’t always a bad thing to do, it automatically made her feel like she was getting the raw end of the deal.  It made her feel like she had no say – like she was powerless in those situations and in our relationship.

Imagine instead, a situation in which Louise felt like she was making the decision to go to a particular restaurant because she wanted to help me get in better shape.  In that situation, she would feel empowered, like she’s making her own decision and doing so because she wants to help me.

Several years ago, Louise and I founded 2 health blogs and also founded 2 health magazines that are both now wildly successful.  Part of that success means that dozens and sometimes hundreds of people email us every day.  Many of these emails are thanking us for helping them, but more of them are asking us for help or advice on problems that people are still dealing with.

Can you guess what the most commonly mentioned problem is?

Yep – dealing with family.  Trying to convert them or just trying to stick to a diet when family is not on board.  I’ve never taken the time to calculate what percentage of emails mention this problem, but I’m pretty sure that it’s almost twice as common as the second-most mentioned problem.

That’s part of the reason that I’ve written a book on this topic, but it’s also the way in which I’ve learned a lot about dealing with family.  I had my own experience, but seeing how thousands of other people deal with it has been invaluable.  I’ve seen many people succeed, but unfortunately, I’ve seen many more fail.

As a result, I’ve focused a lot of my time and energy in recent years on trying to help more people succeed at dealing with their family with respect to health and diet.  And I’m not bragging, but I don’t think anybody else out there is getting the same results that I’m getting.  I certainly can’t claim to solve 100% of cases in this respect, but the approach I’ve come up with works when someone actually applies it.

It worked for me before I even knew what I was doing, and by helping many other people in this situation, I’ve refined and improved the process.

Getting your family on board with major diet and health changes (whether Paleo, gluten-free, or otherwise), requires you to do 3 things:

2. You must get extremely clear in your own mind (and on paper) as to how your family can best help and support you.  If you skip this step, then you’ll forever be frustrated, and so will your family.

3. You must commit to regular conversations with your family.  Your family is not a “problem” that you deal with once and everything is fixed.  In fact, it’s not a “problem” at all.  It’s an ever-evolving relationship that can either support you or drag you down, and the choice is yours.

I’ve written a lot more about how to get your family on board with your health and diet changes (including exact conversation plans to have with your family) in my book, The World’s Greatest Weight-Loss Secret.