Just How Healthy is Bacon Really? 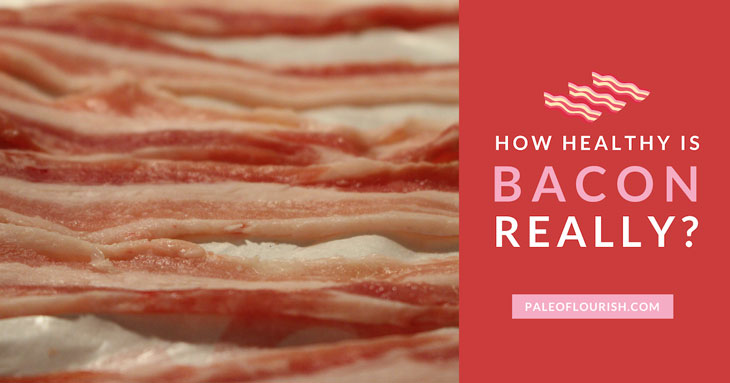 Bacon is like a lightning rod. Talking about it too long will probably have Zeus throwing down lightning bolts at me.

No kidding – bacon is hugely popular in the Paleo world. It’s undeniably delicious and makes just about any meal better.

I think we can all agree that the conventional reasons for shunning bacon are wholly without merit. Saturated fat and cholesterol are not things that we need to worry about. They’re integral parts of healthy, whole Paleo foods.

Still, even in the Paleo world, bacon occasionally gets a bad rap, for a variety of other reasons:

1. Nitrates and Nitrites. This is the most common reason that many Paleo folks worry about their bacon consumption. Nitrates and nitrites are basically preservatives and they can be artificial (cured bacon) or natural (in the form of sea salt or celery juice, most commonly) (uncured bacon). However, whether artificial or natural, it’s the same thing. Most importantly, all current scientific research indicates that nitrates and nitrites are – if anything – likely to be beneficial rather than harmful (see here, here, here, and here). In fact, most of the nitrates and nitrites we get are produced by our bodies. Note, buying either cured or uncured bacon will contain nitrates – the nitrates in uncured bacon are just from natural forms like celery juice.

2. Sodium. Sodium is yet another myth that just won’t go away. While it’s true that we eat more sodium than most of our prehistoric ancestors, the suggestion that sodium is linked to high blood pressure has been questioned. Check out this, this, and this article for more. 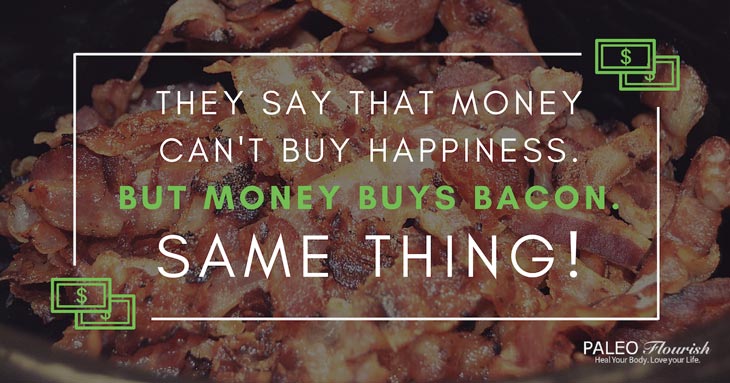 3. Hormones, Antibiotics, and Bad Feed. This is the critique of bacon that carries the most weight. Most of the bacon that you buy in your local supermarket comes from hogs that were raised in conditions that would make you shudder, and they were likely fed an abundance of grains and soy (and who knows what else) and were injected frequently with antibiotics and hormones. Unlike cows, pigs don’t eat just grass, but neither should they be raised on the food that they’re fed in most factory-farms. Whenever possible, buy bacon from your local farmer or somewhere you know is properly raising and feeding the hogs.

4. Added Sugar. Bacon tastes so good naturally that you wonder why anybody ever thought they needed to add sugar to it. And yet, most bacon found in grocery stores is chock-full of added sugar. This doesn’t mean you shouldn’t eat bacon, but you should be careful which bacon you buy. Check out US Wellness Meat’s pork and beef bacon for a delicious sugar-free bacon option.

5. Overeating. This really depends on your goals, but if you want to lose weight, bacon is not the best choice. We don’t believe in counting calories, but how much you eat matters in the end, and bacon is amazingly easy to eat A LOT of.

Bacon is solidly Paleo, but only if you’re buying no-added-sugar bacon from farms that humanely raise and pasture their pigs.

Thanks so much for the link. This is an issue that I’ve researched quite a bit, and from what I can tell, it looks to me like there’s very little evidence that we should be concerned about nitrites or nitrates. I generally agree with Chris Kresser on this issue (you can find his article here: http://chriskresser.com/the-nitrate-and-nitrite-myth-another-reason-not-to-fear-bacon).

The main 3 reasons I don’t worry about it at all is (1) 70-90% of nitrites are produced endogenously (in our bodies), and (2) you can’t avoid nitrites or nitrates in any cured food – they just use things like celery juice, which contains naturally occurring nitrites, and (3) nitrites and nitrates are processed or expelled from our bodies within a very short time, so there’s very little potential for long-term consequences.

I’ll write a more thorough article on this soon, although it will mostly agree with the one I linked to from Chris Kresser.

Thank goodness, Jeremy! I do love my bacon! I don’t know for sure, but I think most pigs and other animals here in the UK are still raised outside on grass. I saw a programme on TV last night though, about cows being raised indoors, fed on grains and soy, and with huge holes in their sides, so that the faeces don’t go through all the processes that lead the beasts to produce methane – all to be able to rear more beef for a rising world population, as soon there won’t be enough land to grow enough grass on. it was scary! It was recommended that humans cut back to 100g of meat a day to prevent the need to produce more and more beef, etc .

Deb,
Can you tell me more about that? I have psoriasis, and hadn’t heard that bacon and beef were problematic.