Despite its name, there are a surprising amount of cheese-free (even dairy-free!) cheesecake recipes out there. Here’s our list of the 28 sweetest dairy-free, Paleo-friendly cheesecakes which you will want to make straight away!

Whether you’re addicted to chocolate or looking for more fruit in your life, this cheesecake list has you covered. And if you’re looking to avoid using your oven altogether, we even have some great no-bake cheesecake options too! Personally, I’m excited to try out the passionfruit cheesecake. Or should I make the sweet potato pie cheesecake first? So many cakes, so little time!

Here are just a few of the Paleo Cheesecake Recipes we’ve included: 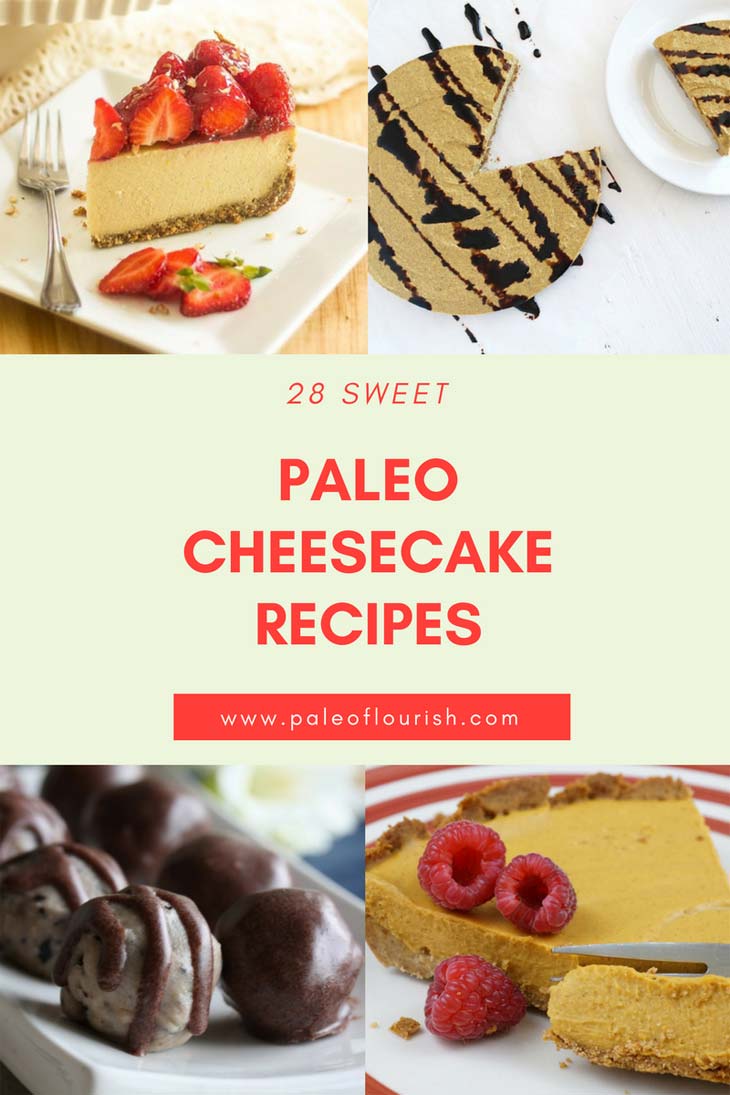 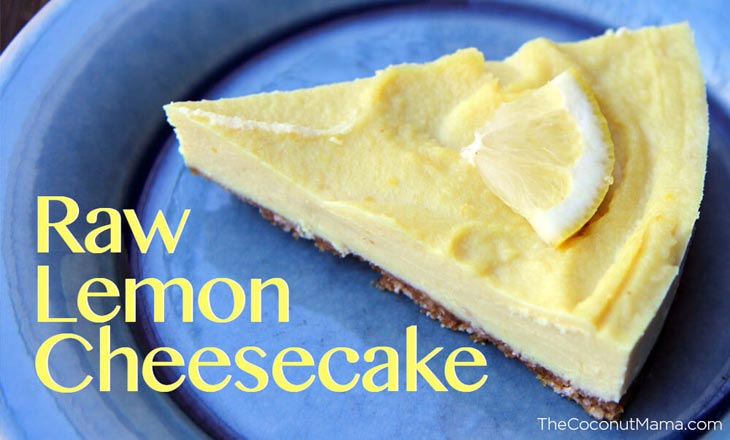 Let’s start the list with a tangy lemon taste, a really great flavor for cheesecake if you’re sweet tooth isn’t quite as strong as some people’s. Lemon is a great refreshing taste which is perfect for summer – it would be a great finale for a tasty barbeque or dinner party. 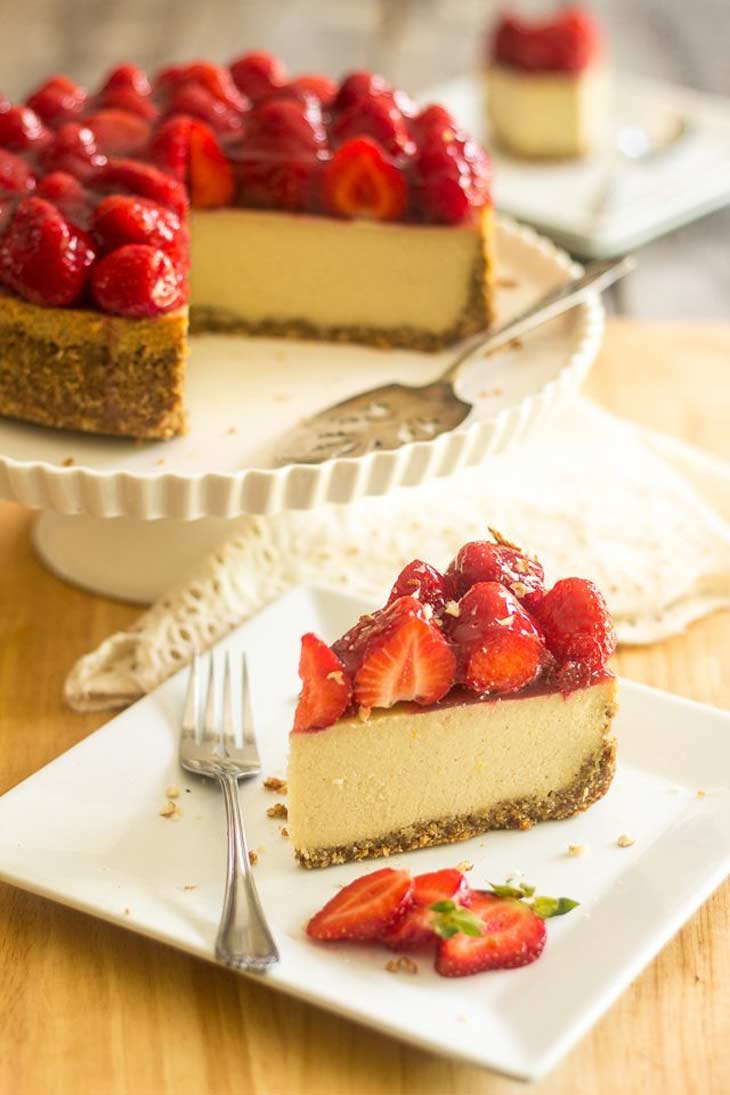 Don’t be put off by the number of ingredients involved in this recipe as you will be missing out! The stand-out ingredient is, of course, cauliflower – the secret to making this non-dairy recipe just as tasty and creamy as a real cheesecake.

– Honey, Ghee and Me

This cheesecake almost looks like a gateau with all the yummy berries on top and there’s no need to bake this cheesecake as the almond and coconut flakes are bound together by dates. This is a tasty recipe that would not look out of place at a summer garden party.

Another no-bake option in the list, with a compressed pecan and date base and a delicious strawberry topping. This cheesecake can be chopped into smaller bites which would be great for finger food at a party and everyone is sure to love this classic flavor. 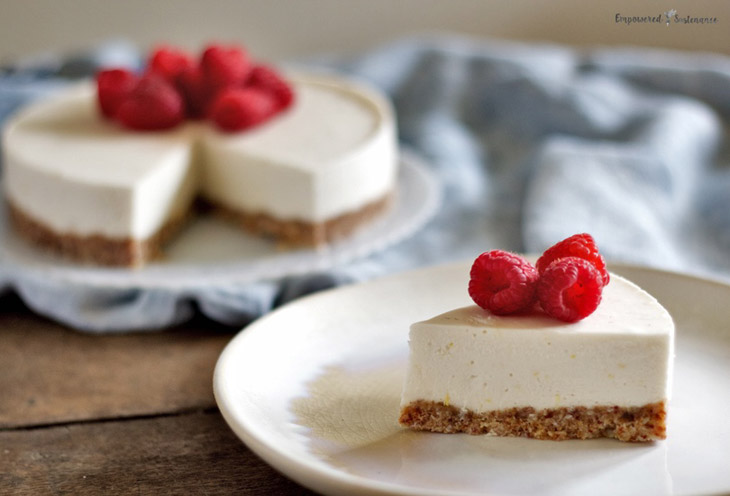 Another refreshing lemony cheesecake with a nutty base and plenty of bite. The gelatin in this recipe means you will end up with a slightly more solid cake, which is easier to slice up and serve. Fresh raspberries are a fab addition to top this cheesecake.

I love mango, so having this Paleo-friendly cheesecake recipe is a dream and combining it with key lime pie flavorings… to die for! With tropical flavors and a bit of tang with the lime, you can’t go wrong with this dessert.

When I found this recipe I was very intrigued – the mix of sweet strawberry, tangy rhubarb and slightly spicy ginger sounded like a winner to me. There’s only a little bit of cooking involved when boiling the rhubarb and ginger mix, so only requires a little bit of extra effort, but the results are definitely worth it.

If there was ever a recipe made for summer, then this is it! Passionfruit is ultra tasty and even better in a cheesecake. This Vegan-friendly recipe is almost raw, with just the addition of boiled agar to add sturdiness to the cake.

The first pumpkin based recipe in the list – this Vegan option sounds like a perfect dessert for Fall or Winter, with warming cinnamon and nutmeg flavors.

Caramel and apple are some of the food world’s best friends, so this cheesecake recipe sounds super scrummy! This could be a fun take on a toffee apple and a treat for the adults at Halloween when the kids are out trick or treating.

– Clean Eating With a Dirty Mind

Photo Credit: Vanessa from Clean Eating with a Dirty Mind

A swirly take on the pumpkin cheesecake recipe, this time with zucchini being thrown into the mix. This ingredient will bring the creaminess to the dairy-free cheesecake so you wouldn’t even know you weren’t eating cream cheese! 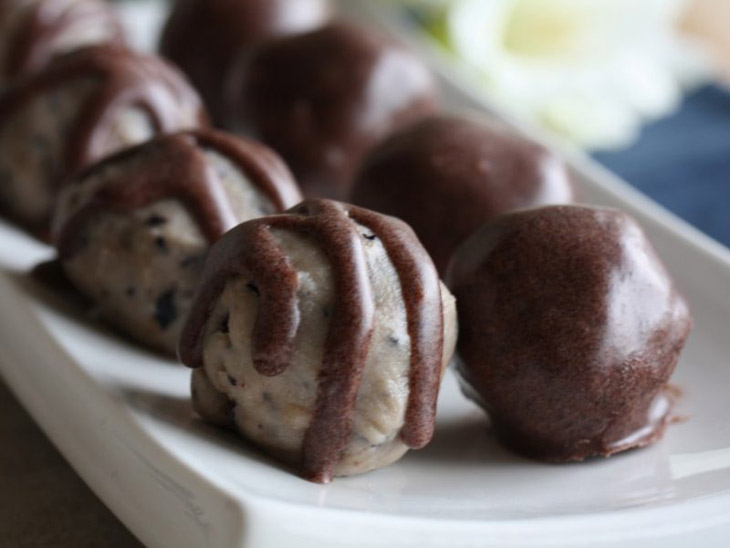 Is it just me, or do you want to make these blueberry cheesecake bites right now? The simple ingredients and no-bake recipe mean you can create these bite-sized desserts with hardly any effort. Finger food for parties has never looked so good! 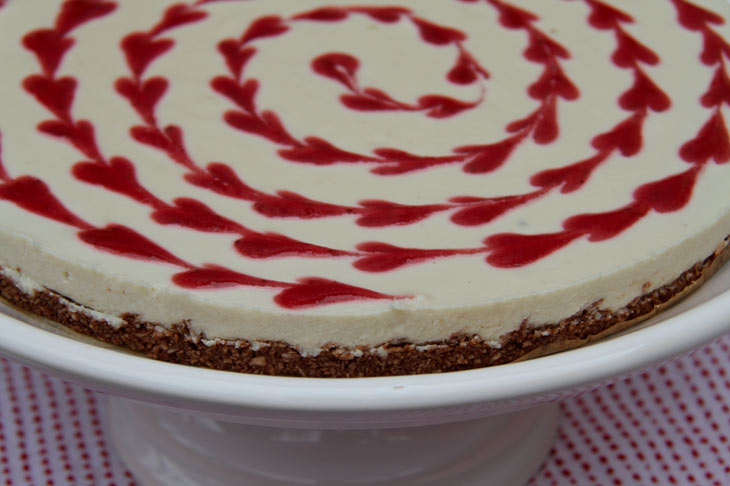 Shredded coconut and honey make the base for this Happy Belly cheesecake and the addition of cocoa powder add a chocolatey vibe into the mix. The strawberry and vanilla top to this dessert is nice and traditional, so this will be a winner with the whole family.

Pumpkin puree and cinnamon make the perfect blend in this Thanksgiving Pumpkin cheesecake. This recipe is sure to keep the whole family happy around the dinner table!

Blueberries make delicious desserts and this recipe is no different. The addition of chia seeds adds a super-food element to this cheesecake, so can we call it a “healthy option” and have it every teatime?

Dark chocolate flavor is sure to satiate many a palate, so I’ve started with this yummy recipe which uses coconut butter and cocoa powder to get that chocolatey feel. This is definitely a comfort dessert for the fall or winter.

This might be another pumpkin based recipe, but with a chocolate twist. With this cheesecake, you get the comforting warmth of cinnamon, ginger and cloves as well as that comforting taste of chocolate – like enjoying a pumpkin pie with a nice cup of hot cocoa.

Chocolate and mint go together like apple and caramel! Enjoy a peppermint taste alongside chocolate for a really refreshing dessert which is the perfect finale for a dinner party.

This no-bake recipe utilizes dates in the walnut base to hold it all together and is topped with lots of yummy ingredients. The cashews are used to mimic the richness of a cheesecake without having to add any dairy. Perfect for Paleo.

Chocolate cheesecake has had a fruity makeover with the addition of cherries. This added extra can give this recipe a hint of tang or add sweetness depending on the kind of cherries you add in.

This may not be a full cake recipe, but these cheesecake bars are still absolutely super for lunchboxes or snacks. The addition of coffee adds another dimension to the flavor and you could choose to use caffeinated coffee instead for a mid-morning boost. 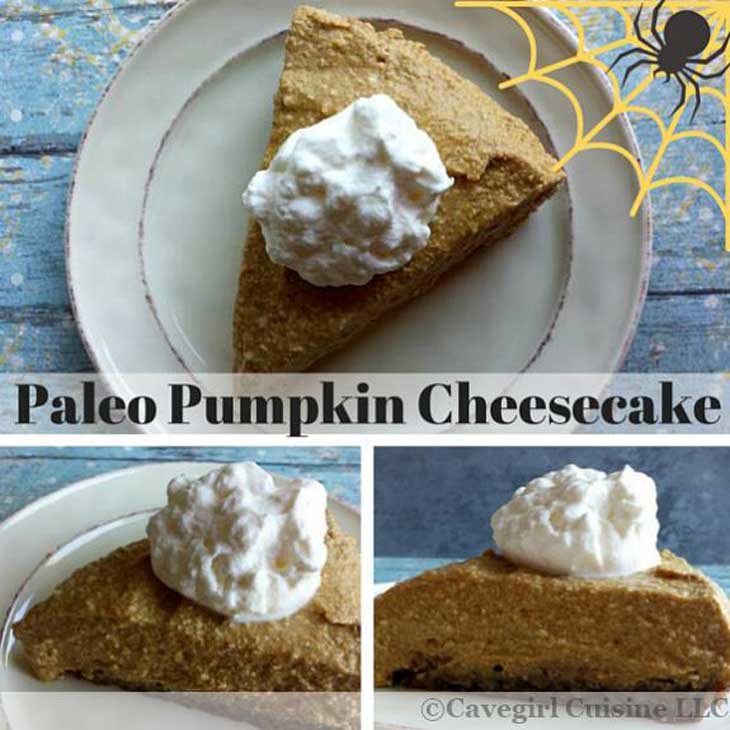 Pumpkin is definitely still having a moment and I’m all for it as it adds such a unique flavor to things, including this Paleo Pumpkin cheesecake from Michelle at Cavegirl Cuisine. Adding maple syrup really sweetens this dessert up and vanilla adds another dimension to the flavor.

Mini cheesecakes are another super party food which would make a really cute addition to a Halloween table or at Thanksgiving. This recipe is actually AIP-friendly too which is really great!

Normally tiramisu is a dessert unto itself, but here is a tasty recipe for a Paleo Tiramisu cheesecake! This coffee-based recipe has a good amount of sweetness to balance out any bitterness and the dark rum of course, a nice little addition. This is a very grown up dessert which might be the one to pull out for guests coming over for dinner.

You can’t get more traditional cheesecake than the humble vanilla variety and this dairy-free version is sure to tickle your fancy. Orange and lemon add some tang to cut through the sweetness of the maple syrup and honey. 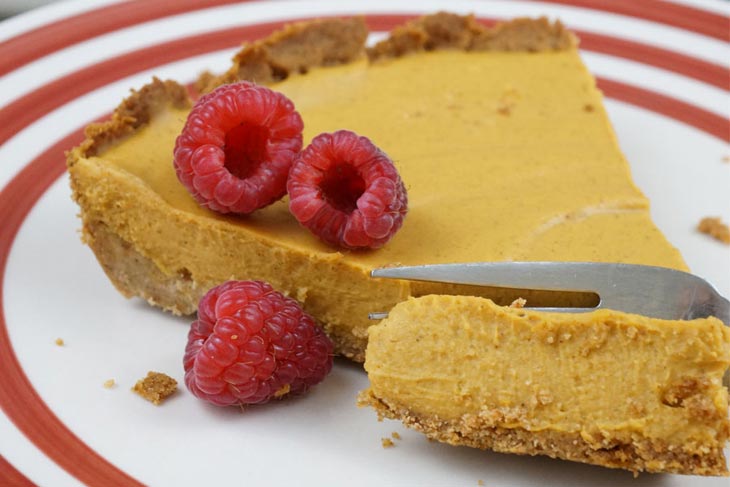 Sweet potato is often used in savory meals but can be ultra-tasty used in desserts. This AIP-friendly recipe is a twist on a sweet potato pie and does not disappoint. This is another recipe with quite a list of ingredients, but it’s definitely worth a try if you’re keen on sweet potatoes. 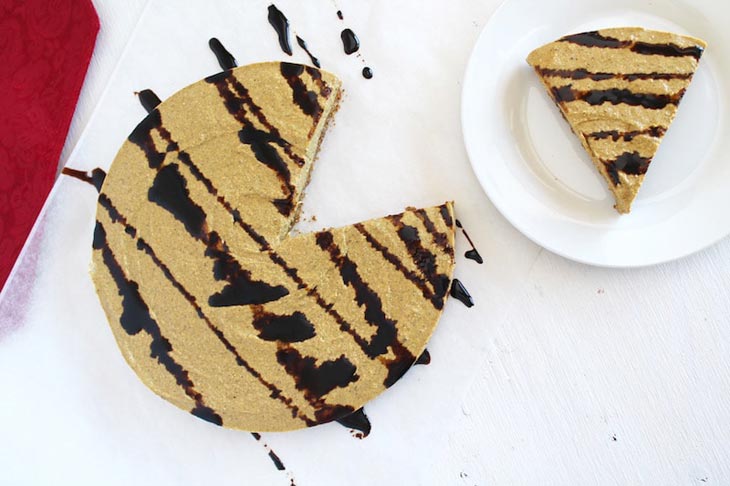 The last pumpkin-based entry on the list is this recipe from Hannah, which has a Graham Cracker crust complimenting a yummy pumpkin top. You could take this as an offering if you’re enjoying Thanksgiving at a relative or friend’s house – and then you won’t be tempted to eat the whole thing on your own!

Maple… cinnamon… gingerbread! This is an amazing recipe for a winter evening or Christmas day. With those warming flavors, your family will be asking for seconds. It makes for perfect party food too, since this recipe is for nice little bite-sized cakes, which are just enough to satisfy your sweet tooth.