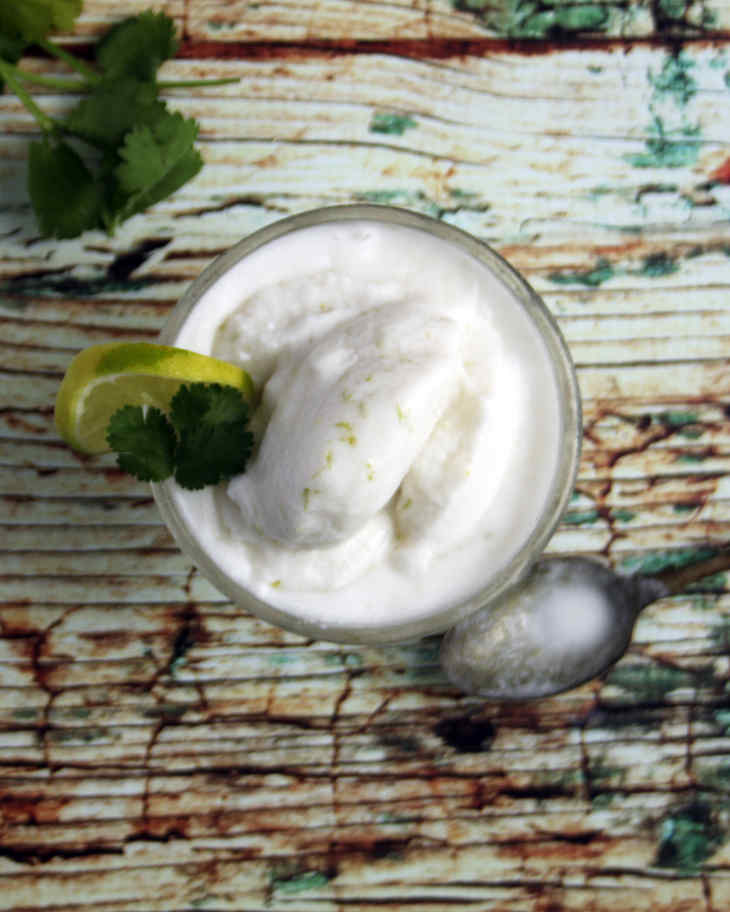 Some restaurant-style recipes are way too complicated to try at home, but sometimes, the trick to making a restaurant worthy meal or dessert is as simple as adding a new or unexpected ingredient. That is definitely the case with this Paleo coconut lime cilantro ice cream! Adding the cilantro elevates this ice cream from simple dairy-free treat to something elegant. It might taste fancy but this ice cream is easy to make, with only four ingredients and an hour of hands on time, you don’t have to be a chef to love this fun tropical flavor combo.

Get The Scoop on Cilantro

The cilantro plant is commonly known as coriander. In England and parts of Europe, the herb is also called coriander but in the US it is typically called cilantro, which is the Spanish name, because of its extensive use in Mexican cuisine.

Cilantro is native to Iran, and grows wild over parts of Europe and Asia. There is evidence that it was cultivated in both Ancient Greece and Ancient Egypt. All parts of the plant can be eaten, but the leaves and seeds are the most commonly used parts.

Most people describe cilantro as having a bright and fresh citrusy taste. However, a very small fraction of the population experiences cilantro as tasting like soap. This is linked to a particular gene and is present in somewhere between 4-14% of the population. If you think cilantro tastes like soap, your best bet is to substitute with another herb!

Infusions: Why This Technique Deserves a Place in Your Kitchen

Infusion is one of the easiest ways to easily add an extra boost of flavor. There are two main ways to approach infusion, the blender method and the stove top method. Which one is best depends on what is being infused.

For fresh additions like herbs, the blender method (used in this recipe) preserves the raw freshness of the herbs while still allowing the flavors to meld with the milk. Herbs can also be infused using the stove top method, however the flavor will not be as fresh and bright.

For other infusions such as spices or tea, heat is best. Placing the ingredients in a saucepan and heating until just before boiling allows the oils and flavors to meld. It is then left to steep, until cool and strained.

This ice cream is fresh, zingy, and sure to remind you of the beach.