Paleo Dining on the Road for Beginners 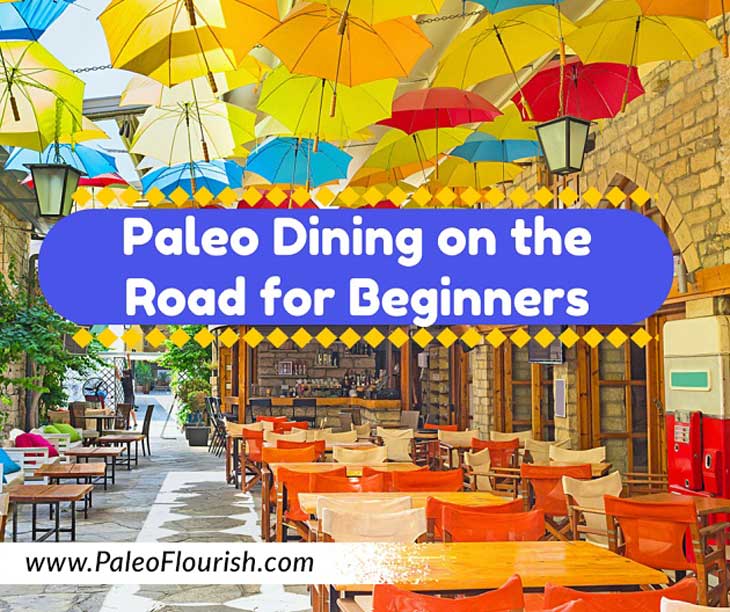 “I’m going to starve if I have to go 10 hours without meat!”

My wife and I, with our granddaughter were getting ready to drive to Oregon from central California, to visit family. My wife was putting some fruit and veggies in a small ice chest for our trip. That was fine for them, but I just don’t feel like I’ve eaten unless I’ve had some protein, preferably a nice, juicy, piece of meat!

As it turns out, my fears were unfounded.

Newbies to the Paleo Diet

I first started learning about Paleo after my wife started sharing information with me that she had been reading about the Paleo diet. We had already been eating better over the last year, buying organic fruits and vegetables, and avoiding processed foods as much as possible. This seemed to kick it up a notch!

I read John Durant’s The Paleo Manifesto: Ancient Wisdom for Lifelong Health, and it just made sense that a natural diet would be healthier than the Standard American Diet (SAD).

My wife and I started thinking about when we would start. She wanted to do a thirty day elimination diet to see if it affected the way she felt or had any other positive benefits. She would eliminate all processed foods, grains, legumes, sugar, and starchy foods, like potatoes.

I was on board, as it clicked with me when I started learning about how humans evolved, and how much our diets have changed in the last 100 years. After getting a few weddings out of the way (couldn’t pass up the cake!), we decided to start.

Around ten days in to our paleo eating plan, we had the trip scheduled. Would we be able to stick with it?

We stopped at a local all-organic grocer before hitting the highway to supplement the fruits and veggie we had packed. I ended up getting some raw macadamia nuts and raw Brazil nuts.(Don’t want to overdo the Brazil nuts due to the high selenium content.) But that was just for snacks. I wanted meat!

We ended up stopping a couple times to eat at restaurants. While most restaurants do not serve organic, grass-fed, free-range food, I was willing to make an exception to get my meat.

You do have some Paleo options:

End of the Road

We stopped in Ashland, Oregon, just short of our final destination, to have dinner. I was in the mood for Mexican food, so we pulled in at a little place called El Tapatio. It was encouraging to see that next to the parking lot was a garden with tomatoes, peppers, and other vegetables.

This was the ultimate test for me, since I hadn’t had Mexican food (other than “street” tacos without the tortillas) since I had started eating Paleo.

Like most Mexican restaurants, they delivered chips and salsa with the menus. Since my granddaughter was with us, we let her eat the chips, but will definitely remember in the future to tell them not to bother bringing the chips.

My wife and I ended up having the shrimp ceviche, forgetting to tell the server not to bother bringing the tostada tortillas with our order. Not a problem, we just sent those back. The ceviche was delicious!

We finally pulled in to my brother’s place and saw the free-range chickens he keeps. I was looking forward to some good free-range eggs. I had survived!

As it turned out, it wasn’t that hard to maintain a paleo diet on the road after all. It just takes a little bit of imagination, experimentation and awareness of what you are ordering.

If you’re interested in starting Paleo, check out our Paleo 101 Guide here.