What Percentage of Protein, Fat, and Carbs should I eat? 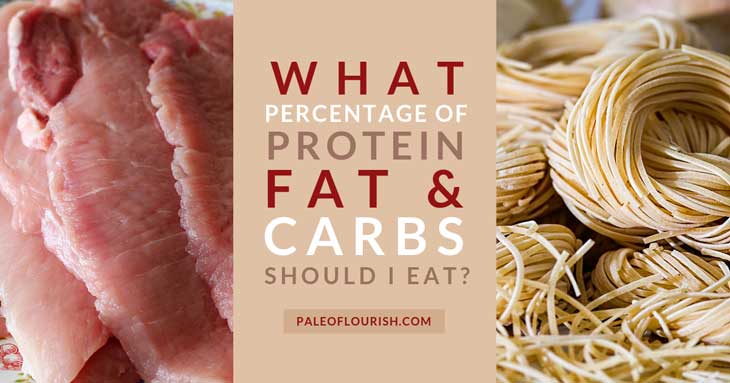 There are a lot of varying opinions on this.

Generally, throughout history (for as long as we’ve known and across all cultures), protein varies between 12-18%. It’s not a huge range, so generally, 15% protein is fine. That said, higher protein diets are generally more satiating, so several studies appear to indicate that higher protein diets contribute to weight loss. For my part, I think keeping protein anywhere between 15-25% is a pretty good target, and there’s a lot of great research and anecdotal reason to believe that we should cycle protein consumption (some days higher protein, some days very low, rather than keeping it constant every single day).

Amount of Carbohydrates and Fats on A Paleo Diet

For carbs and fat, it really varies.

If you look at clinical studies on weight loss, low fat tends to be marginally better than low carb for weight loss, although I think that’s actually changing with the number of people who are insulin resistant. For someone who’s very insulin resistant, I definitely think low carb is much better, at least for a while.

For someone who doesn’t have a lot of other issues, I’d play around with it.

Amount of Protein on A Paleo Diet

Keep average protein between 15-25% and then play with low and high fat (all whole, nutritious foods, of course).